One time too many!!


I've walked away from the van on my way to go kayaking or hiking only to have to return again just one too many times because I've left something behind.

You would think that I'd have this down by now, but I can't count how many times I've started off on an adventure without my hiking stick, or the binoculars, and once even without trail food! (What a near disaster that was!! I mean how am I supposed to maintain this hard-won girth without trail food??)

You could be unnecessarily cruel and say it's just a sign of the ages, specifically my own age, but I'd like to point out that commercial airline pilots use written checklists for just about everything, even though they've gone through the process hundreds of times before. 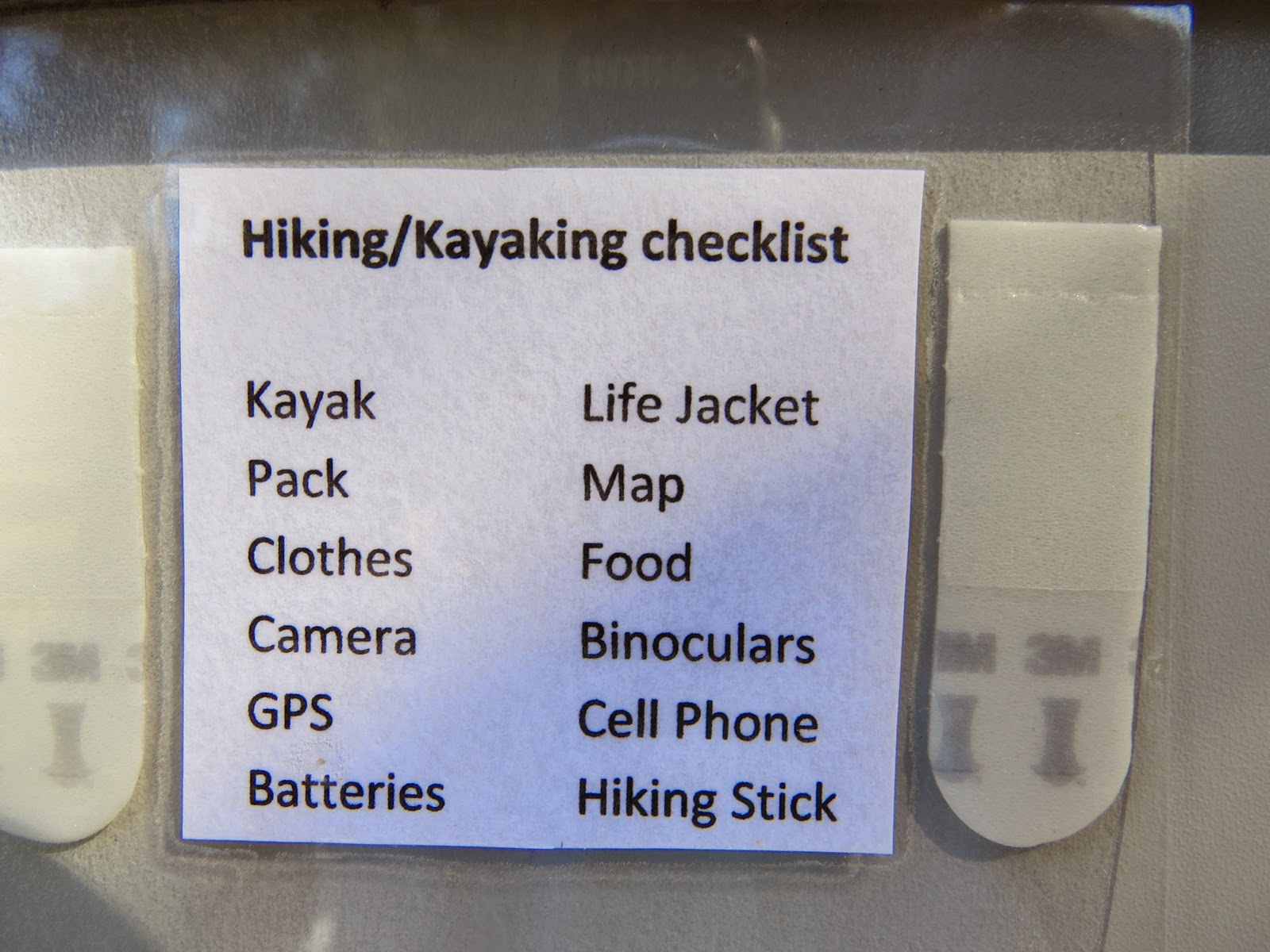 So when I got back from my last little trip I created a simple checklist. First I made one for kayaking and a separate one for hiking, but most of the items on one list were also on the other, so, since I think I can figure out on my own that if I'm heading out on a hike I don't really need to pack the kayak and life jacket, I combined them into a single list.

I don't need detailed notes (At least not yet.) to remember that when I take the kayak I also need to take the various dry bags, paddle, pump, etc. that go along with it, and clothing will depend on the weather. (Clearly I don't need a wool hat and gloves on a summer day and it's pretty ingrained in me that 'clothes' means to always carry one more outer layer than I'm wearing in case I end up unexpectedly overnighting.)

Since my pack is always loaded with things like water, poncho, and river shoes, I don't need to list that stuff separately. And, though generally I'm not a fan of duplication, in some cases it makes perfect sense, so both the pack and the life jacket are always stocked with their own dedicated bug juice, sunscreen, fire starter, compass, first aid and emergency whistle, so that sort of stuff is also taken care of. (Yes I always take the pack with me in the kayak but suppose I fall out and the kayak, with pack, gets away from me?? Not that I'm planning on falling out and letting the kayak get away from me, but in the event I ever manage to pull that stunt I'll still have the life jacket and all the gear stowed in it.)

So, after pondering my list until I think I have it right, doing a touch of formatting, running it through the printer and taking the scissors to it, I'm good to go. 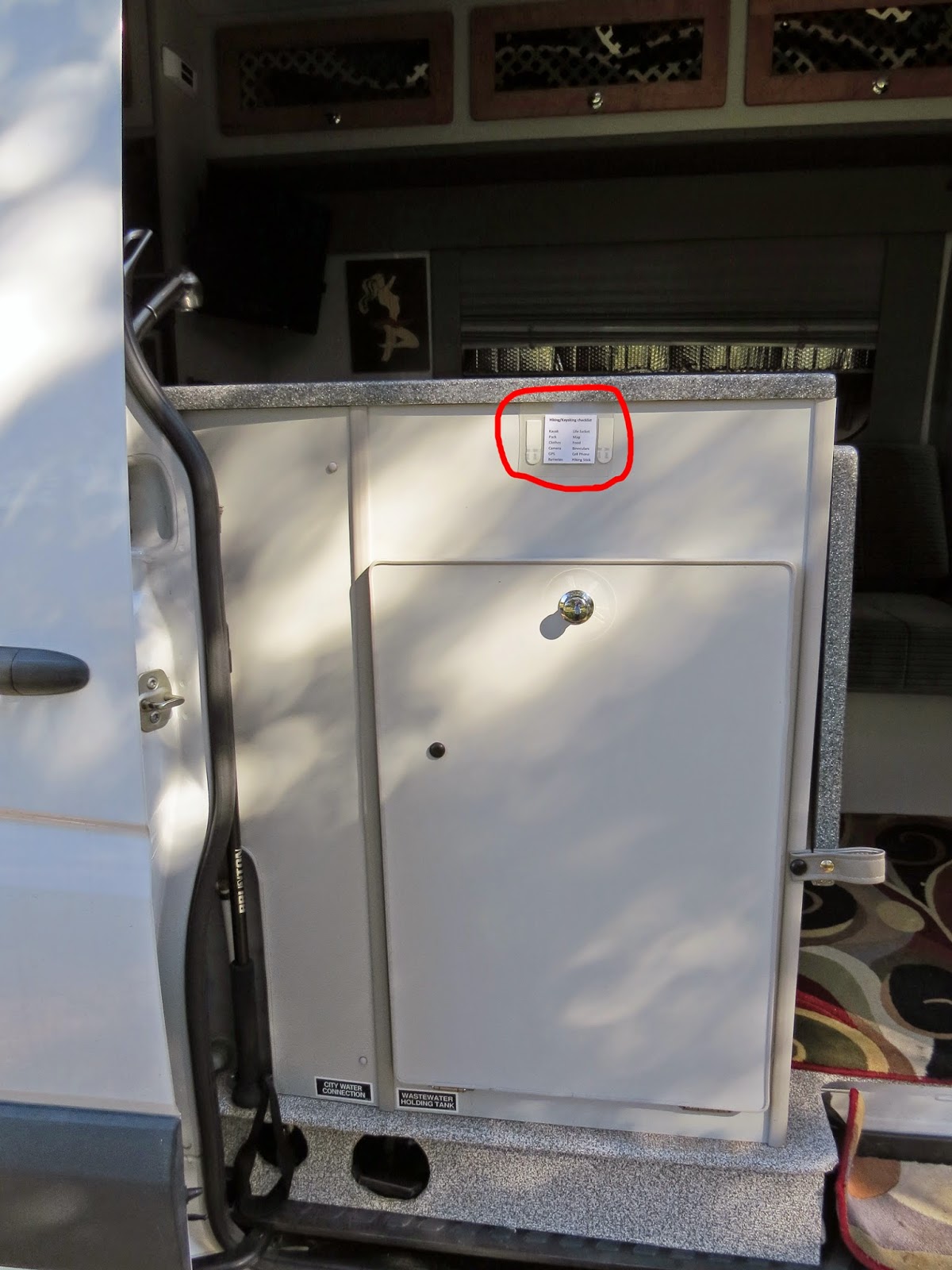 So my new list doesn't end up ignored in the bottom of drawer somewhere or so crinkled up and dirty I can't read it, I picked up a package of self-stick photo laminating sheets, the 3 x 4 size, for a few bucks along with some Command poster strips (Sticky on both sides) and mounted the laminated list on the outside of the kitchen cupboard (Circled in red above.) so it's right in my face when standing outside the open side door where I can make one last check before locking up the van and setting out on my merry way. And, as a bonus, there's plenty of room left over for mounting additional lists, which may very well become necessary as the years march on. . .


So now we'll see how effective this list is at preventing extra trips back to the van.