Colorado Bend State Park; An interlude along the river, The chilly conclusion This morning the sun, still hiding behind the bluffs on the east side of the river, was showing promise, 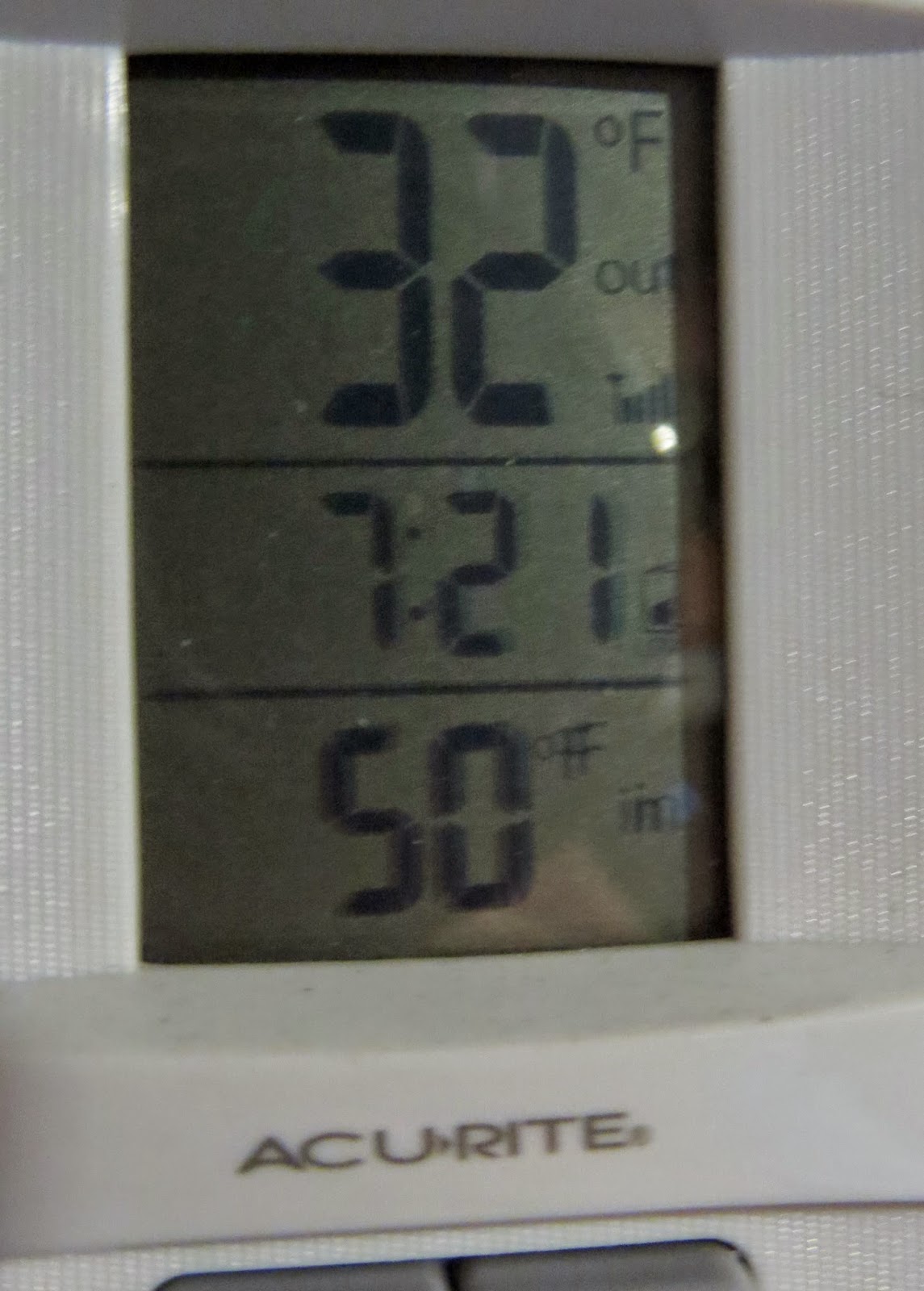 but from where I was standing, shivering in my boots, it seemed more like a cruel taunt! 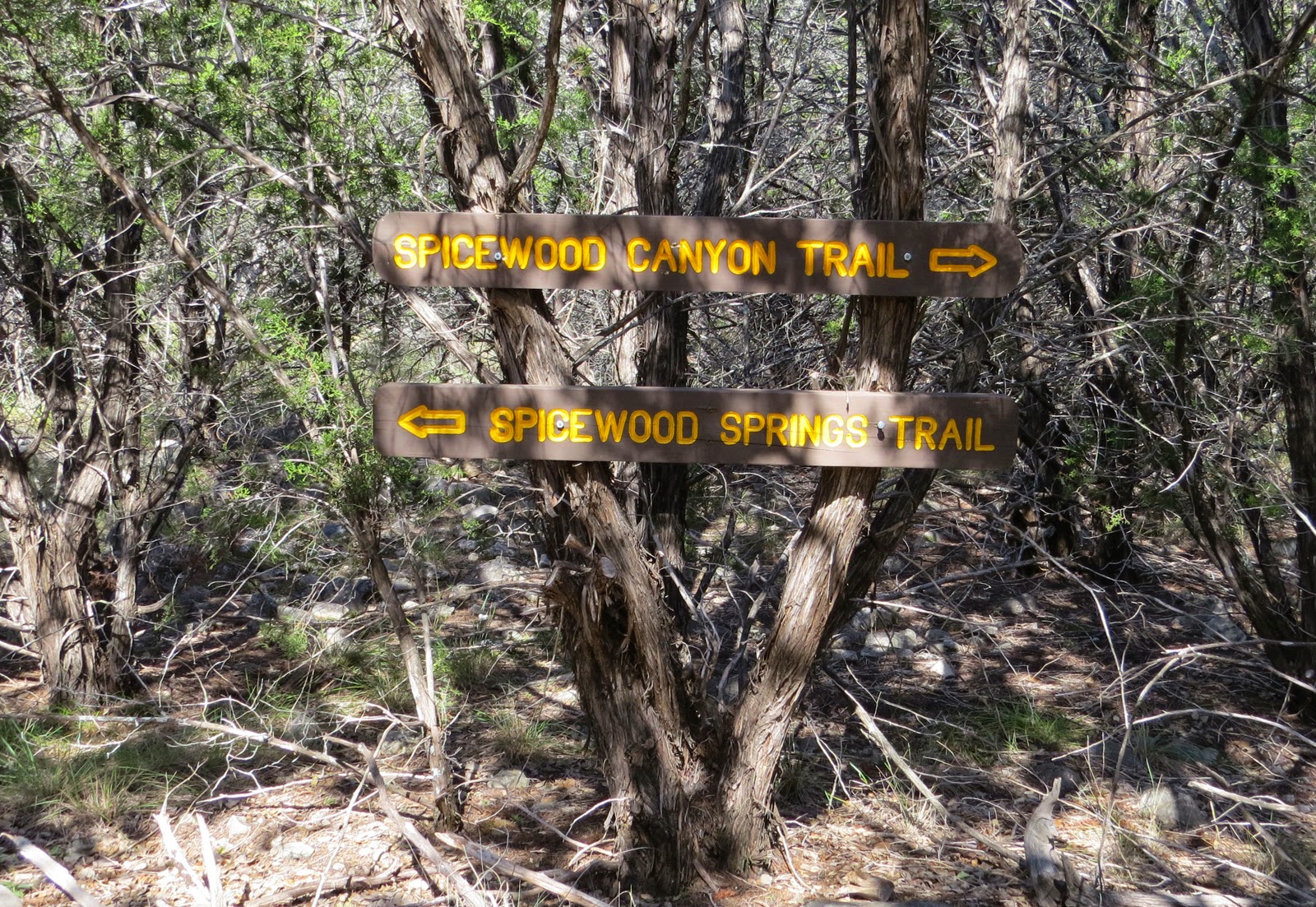 But being the real he-man (stubborn fool) that I am, I girded my loins, (At least I think that's what I girded but there was a lot of shrinkage so it was hard to tell!) geared up and hoofed it down to the southern most point of the state park where I picked up the Spicewood Canyon Trail.

I had my choice of either the canyon or springs trail, or I could have made a nice little 3 mile loop out of going up one and down the other, but the springs trail is another one of those weave-back-and-forth-across-the-creek-get-your-feet-wet propositions and standing there while an icy wind raced down the river gorge and cut right through my layers I just wasn't that motivated, so I took the canyon trail which stays up on the rim, well away from most the wet stuff. 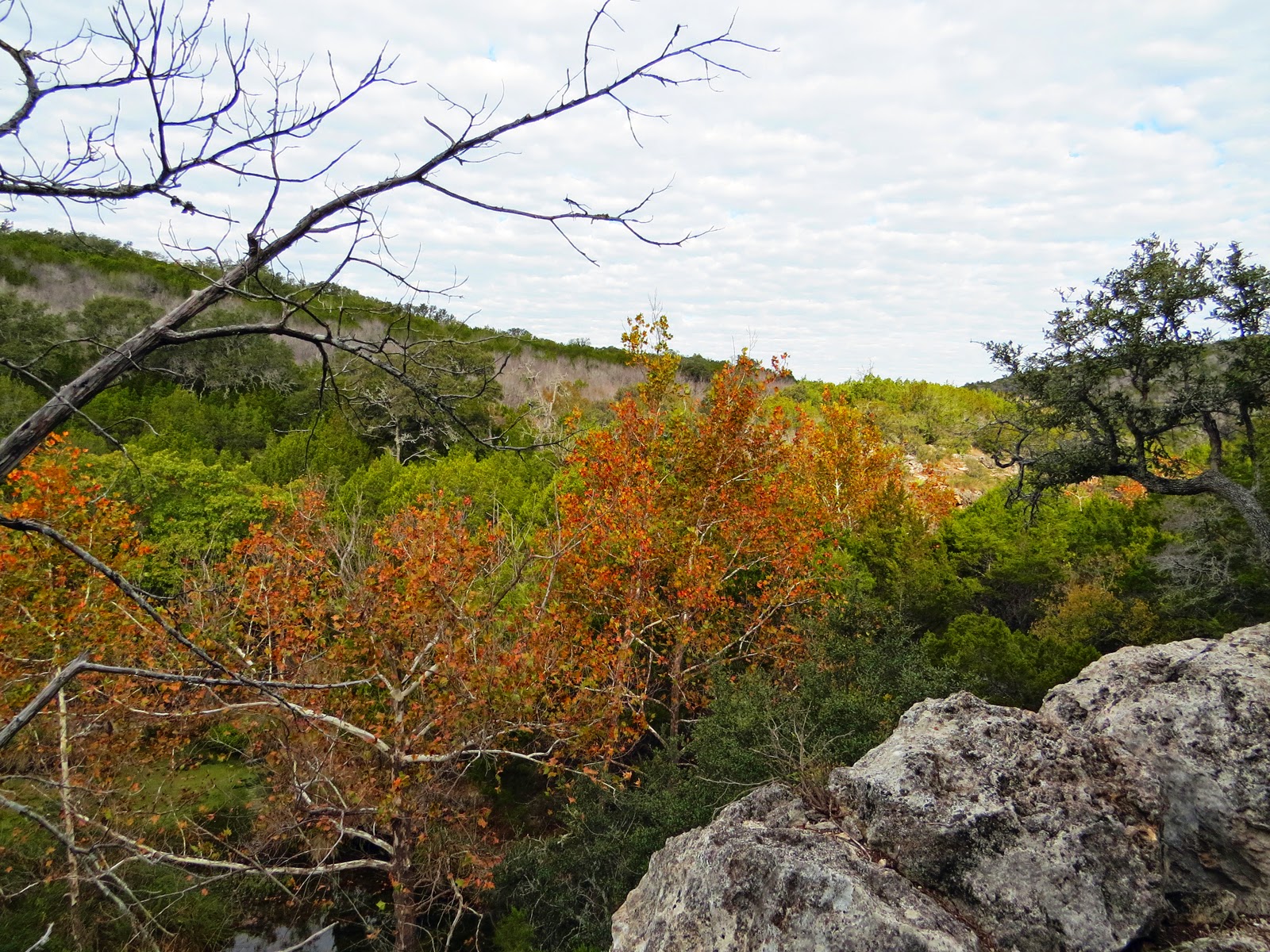 There were plenty of nice views from up there so it's not like I cheated myself or anything.

Besides, the creek-side trails, both this one and the one I skipped yesterday for the same reason, will still be there another day. 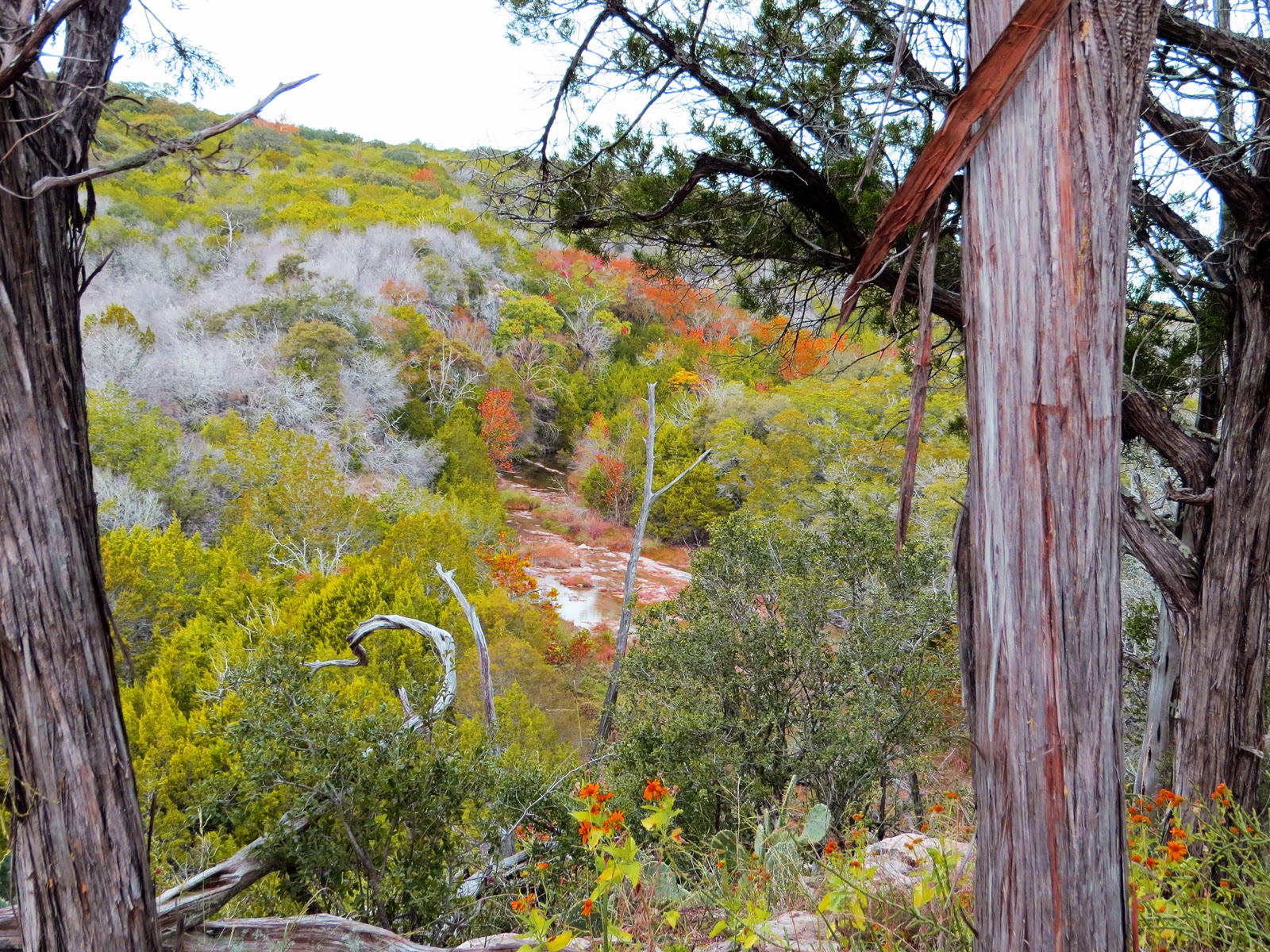 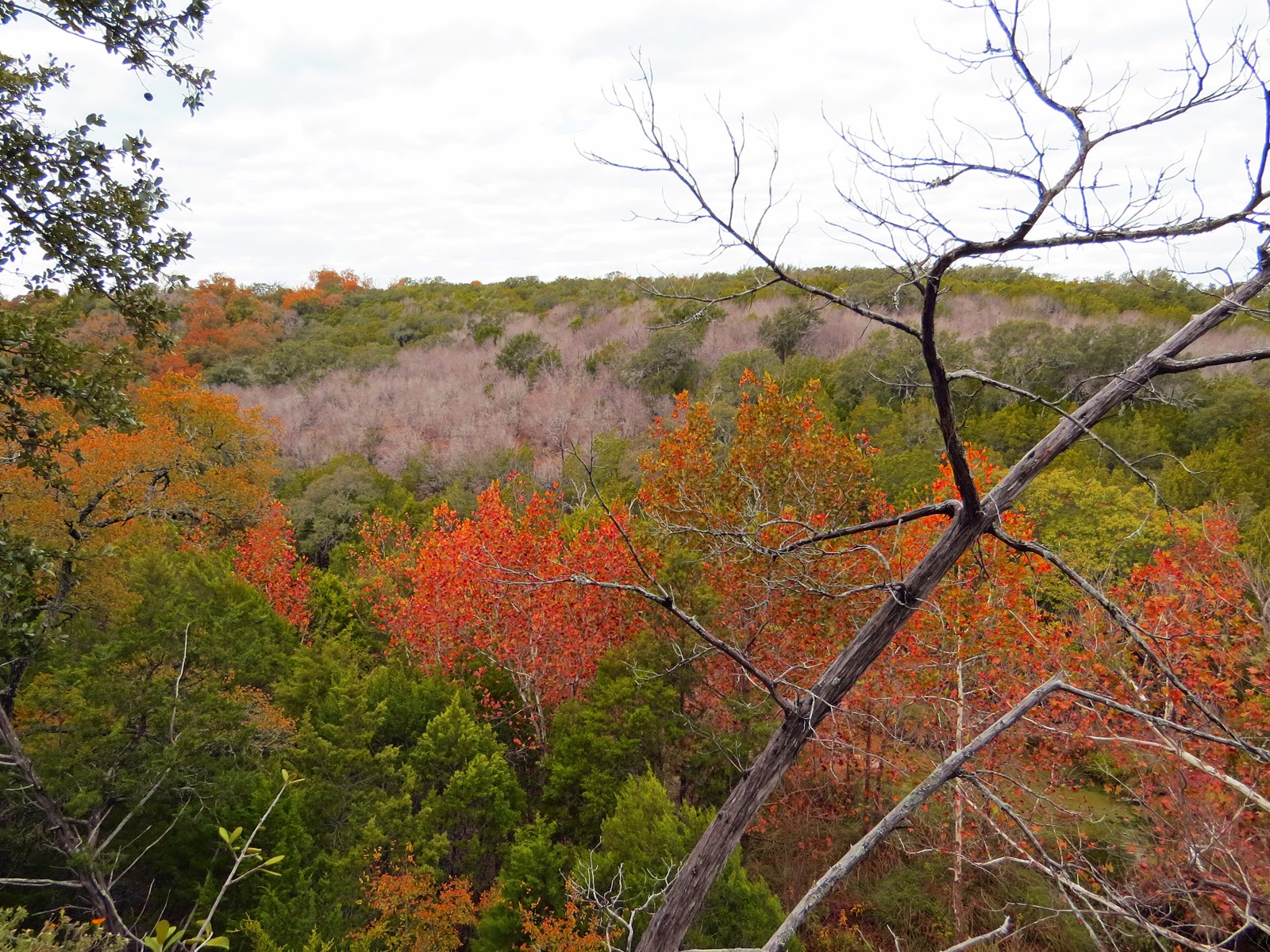 It was a little disturbing though to look out across the hillsides and see those large swaths of grey out there.

The persistent drought much of Texas has been experiencing has been tough on even the hardy cedar and the Cedar Bark Beetle has been killing them off in patches all over the state. 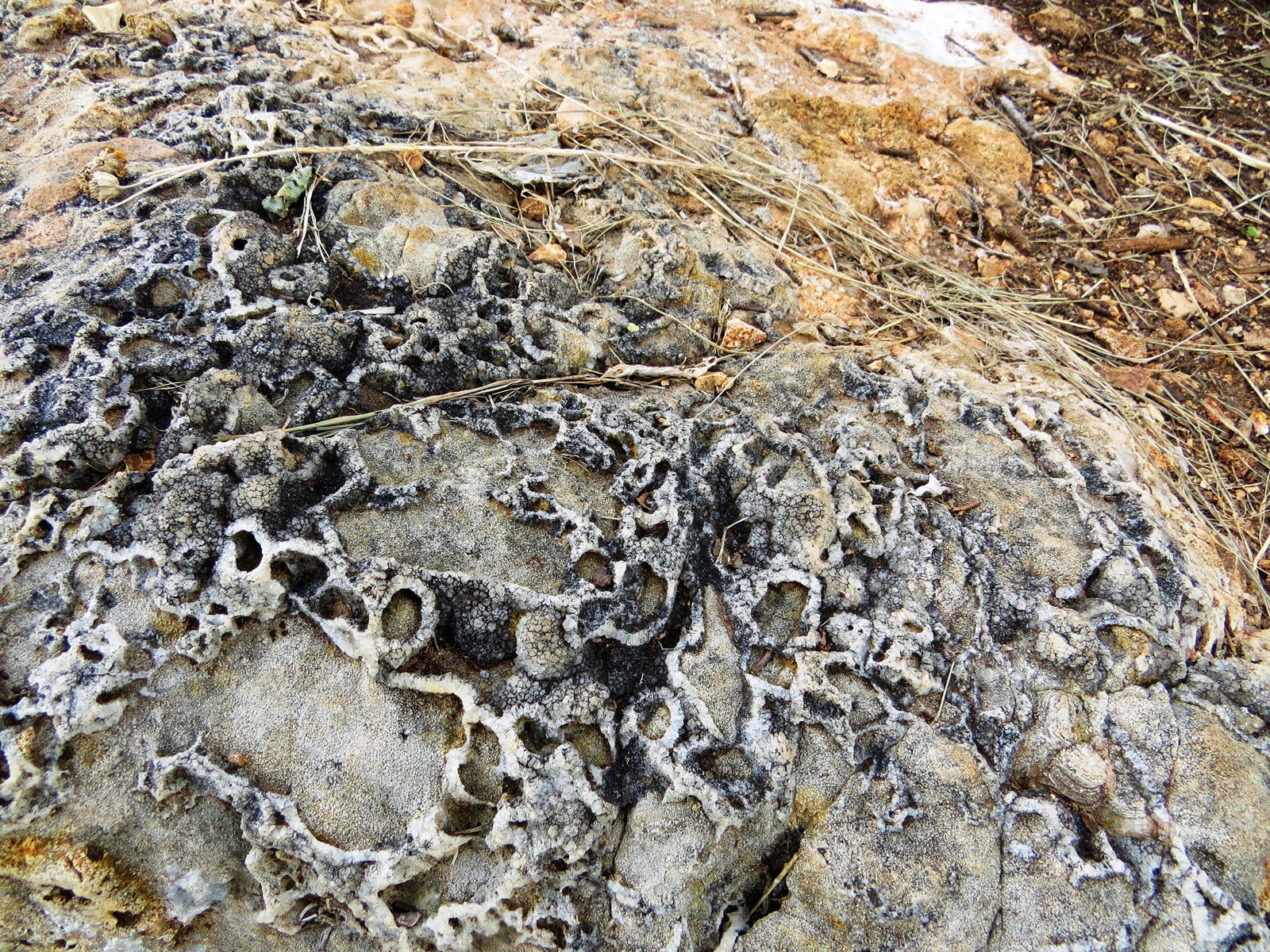 The beetles get into the sapwood and leave tracks under the bark, not too unlike these in the photo above, but these 'tracks' pictured here are actually in/on stone. Not being a geologist I can't give a detailed explanation of how this happens, but it's pretty cool anyway. 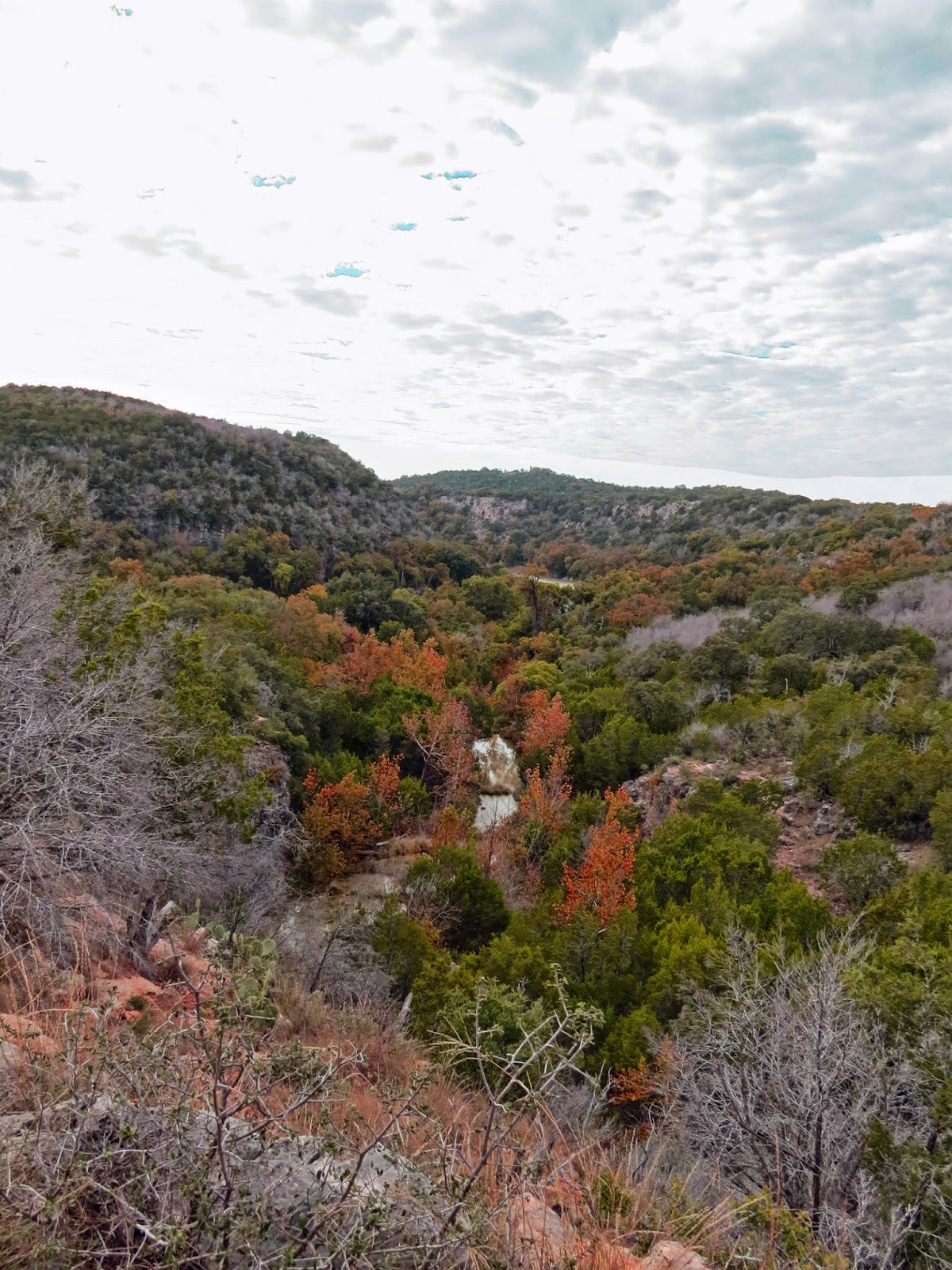 As I continue to climb (And climb, and climb!) up the canyon rim I can look back and get glimpses of Spicewood Creek far below, and out there in the distance, showing as a tiny, light colored slash below the peak in the middle of the horizon, is a hint of the Colorado River right where it's rounding the bend below the bluff to the left and heading down the slot between that bluff and the one in the center of the photo. 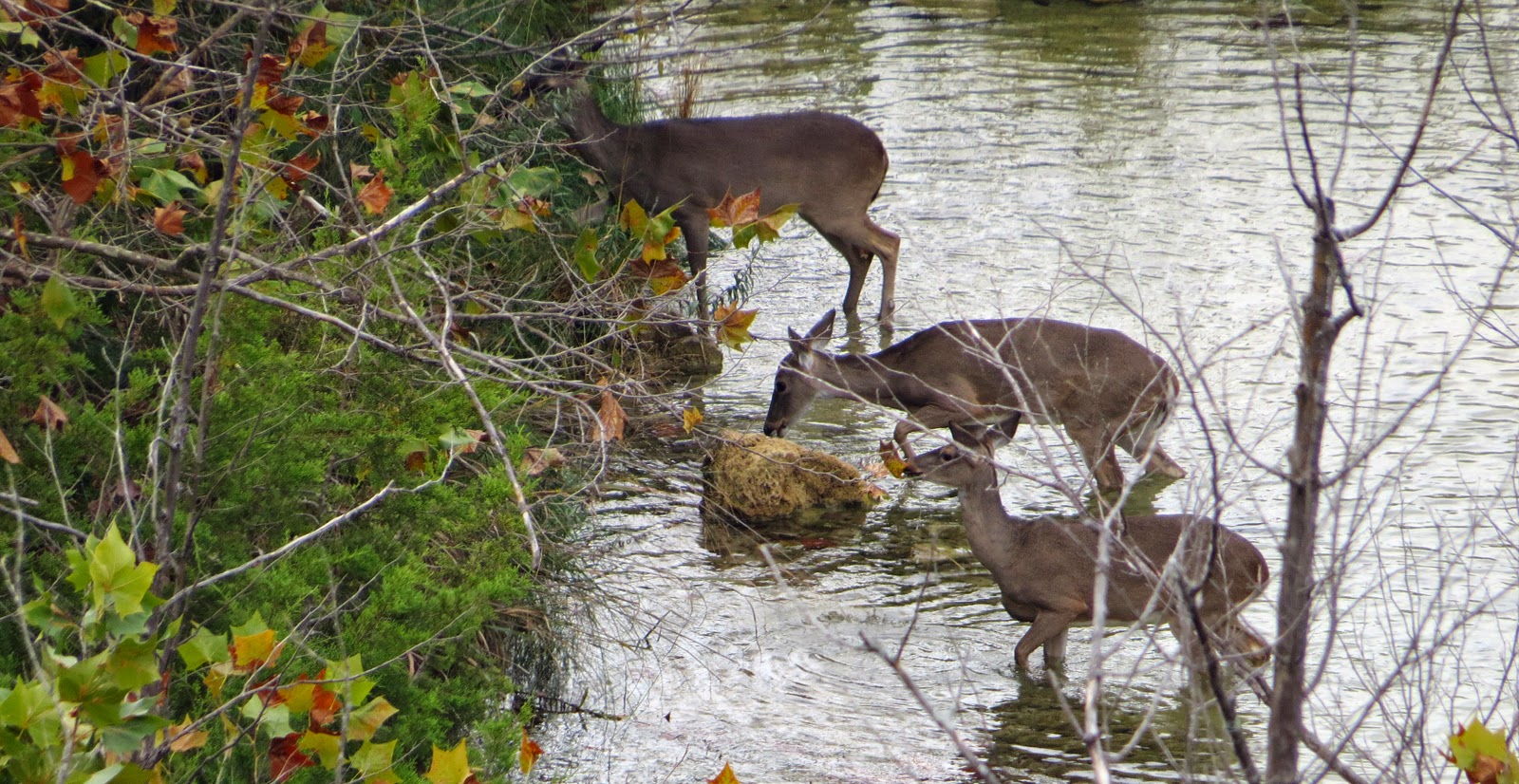 While I was standing there getting that shot of the creek and river, I heard something wallowing around way on down below and thought there were some hikers on the creek trail below me, but when I zoomed in for a better look I discovered it was a surprisingly noisy trio of deer instead. 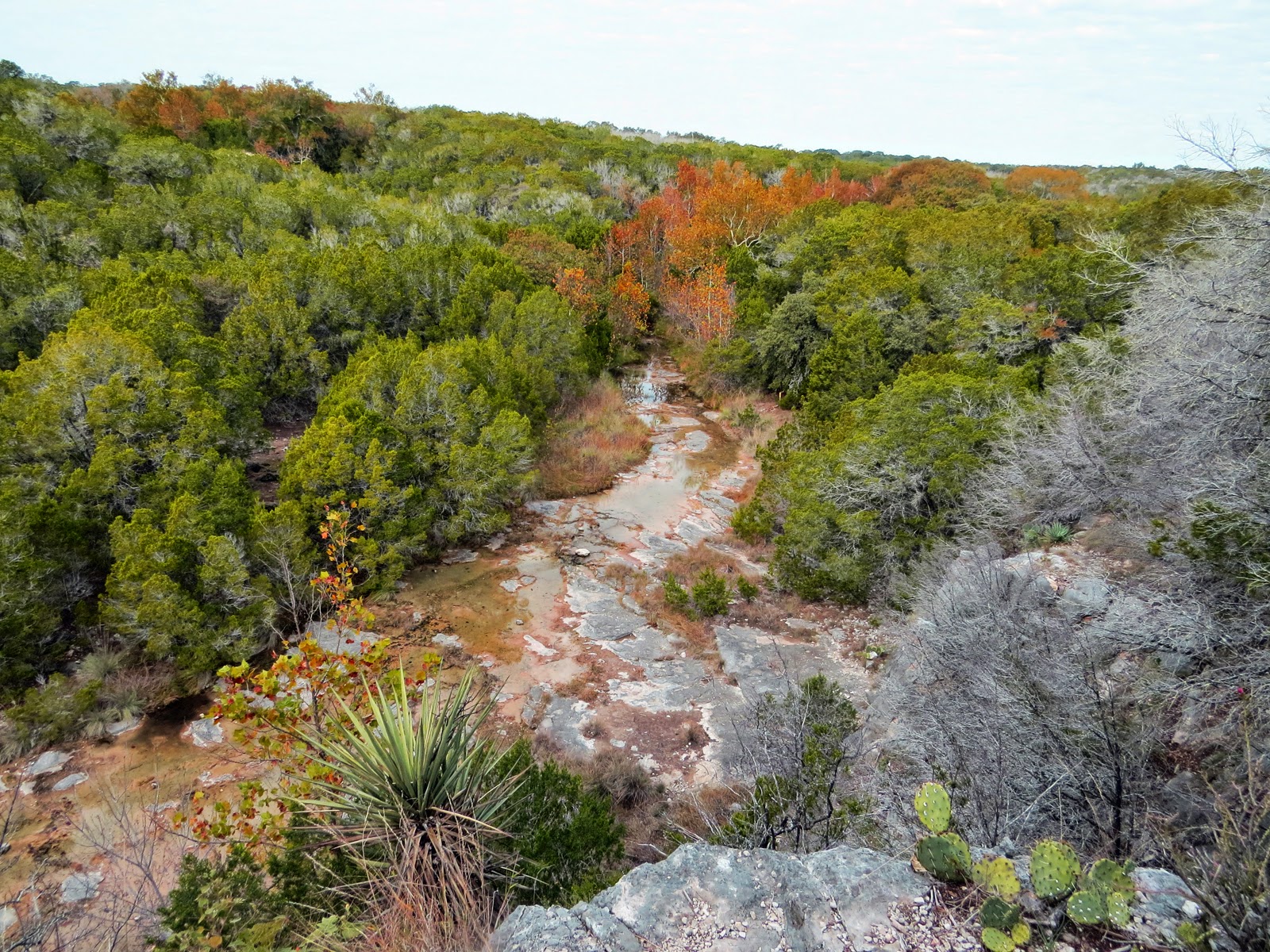 As long as I was standing there, (OK, OK, after a dozen miles yesterday and a couple hundred foot climb so far this morning, standing still for a while wasn't so much an indulgence as a necessity!)  I spent some time scoping the creek looking for signs of the trail I'm sure I'll hike one day. 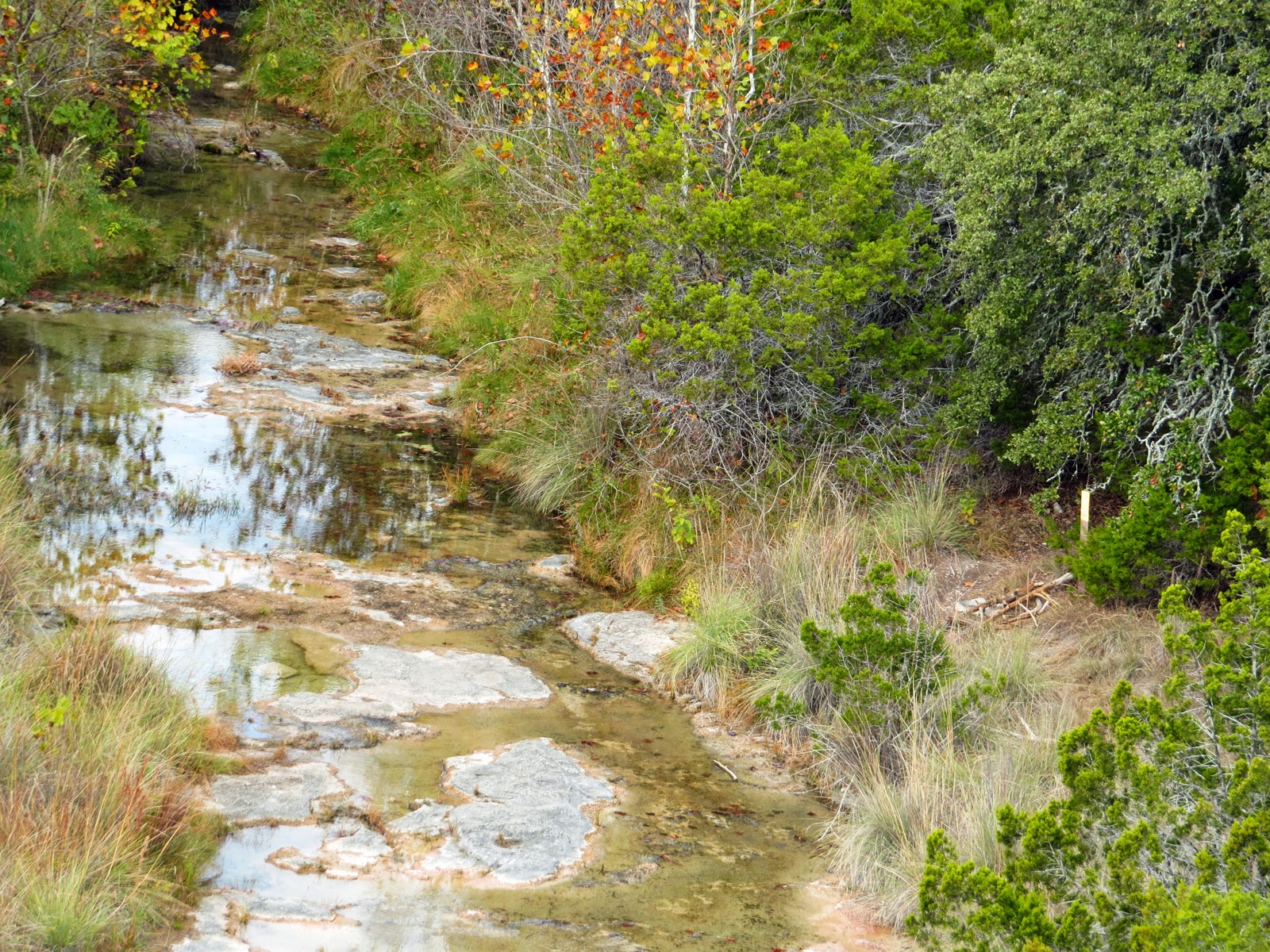 One of the crossings, (See the trail blaze there on the right side of the photo?) didn't look like it would be all that wet, but I wasn't about to give up my hard-gained altitude to go down and check out any of the other crossing for degree of wetness!

Instead I hiked the canyon trail up to it's high point at a road crossing, where I crossed (Duh!) and picked up the Lemon Ridge Pass Trail for a long but mostly gentle drop back down to the River Trail which would then take me back to camp.

In addition to just enjoying the outdoors and the solitude (Today I didn't see a single person, not even back at the campground.) I ran across a few interesting things. 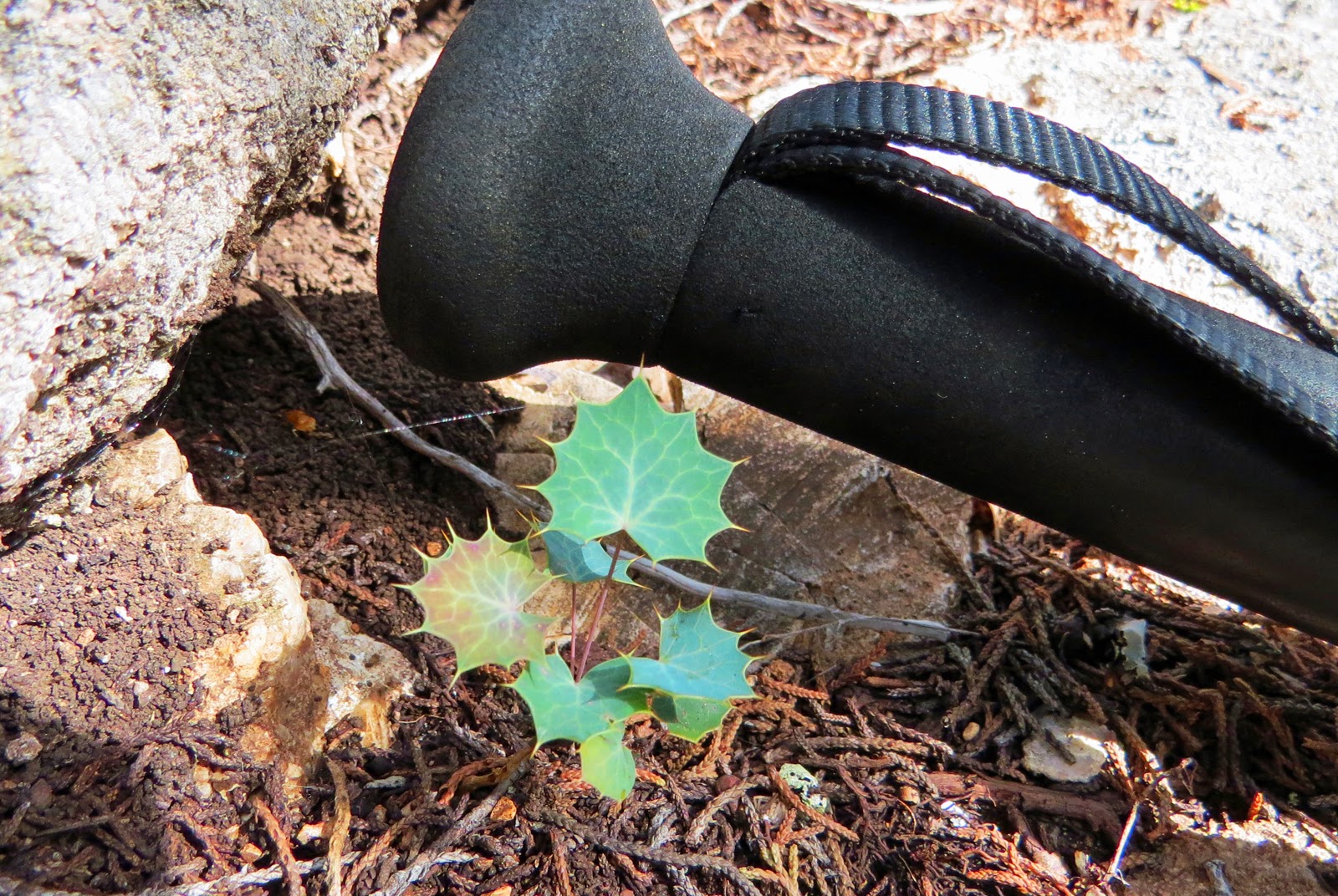 Like this tiny little tree with it's bold, well defined leaves, one of them showing just a hint of fall color. (In case it's confusing, that's the head of my hiking stick next to it.)

And this poor little guy. 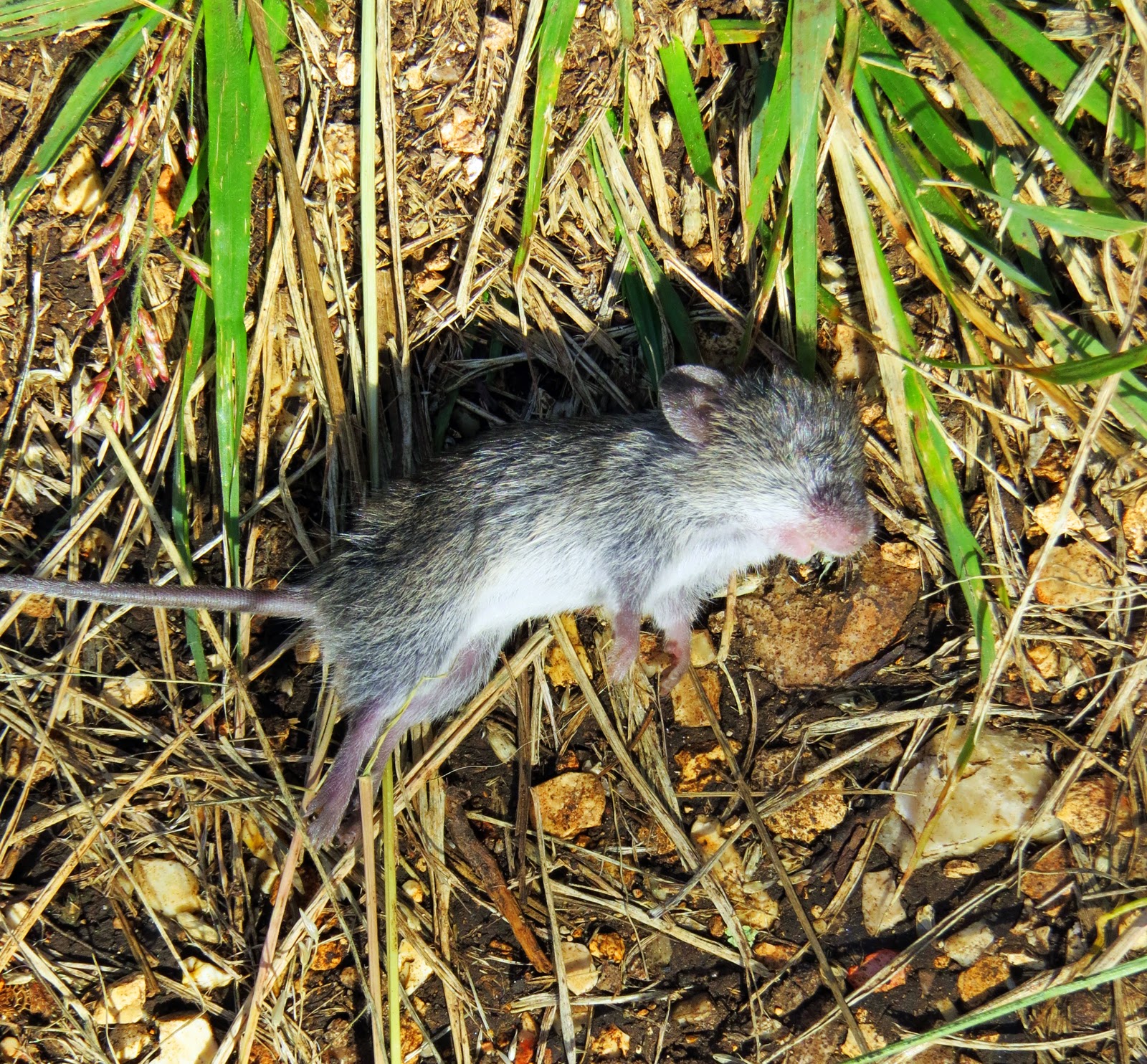 He was just laying out in the open on the trail without a mark on him.

An overlooked snack just laying there completely unmolested; which isn't something you see everyday.
It made me wonder what the story was.

Did he heroically lead everyone else in the band through the dark and stormy night to safety, only to have his body give out before he could make it himself?? Or maybe he's from the other end of the spectrum and went on a bender last night and the cold felled him before he could stumble all the way home??. . . 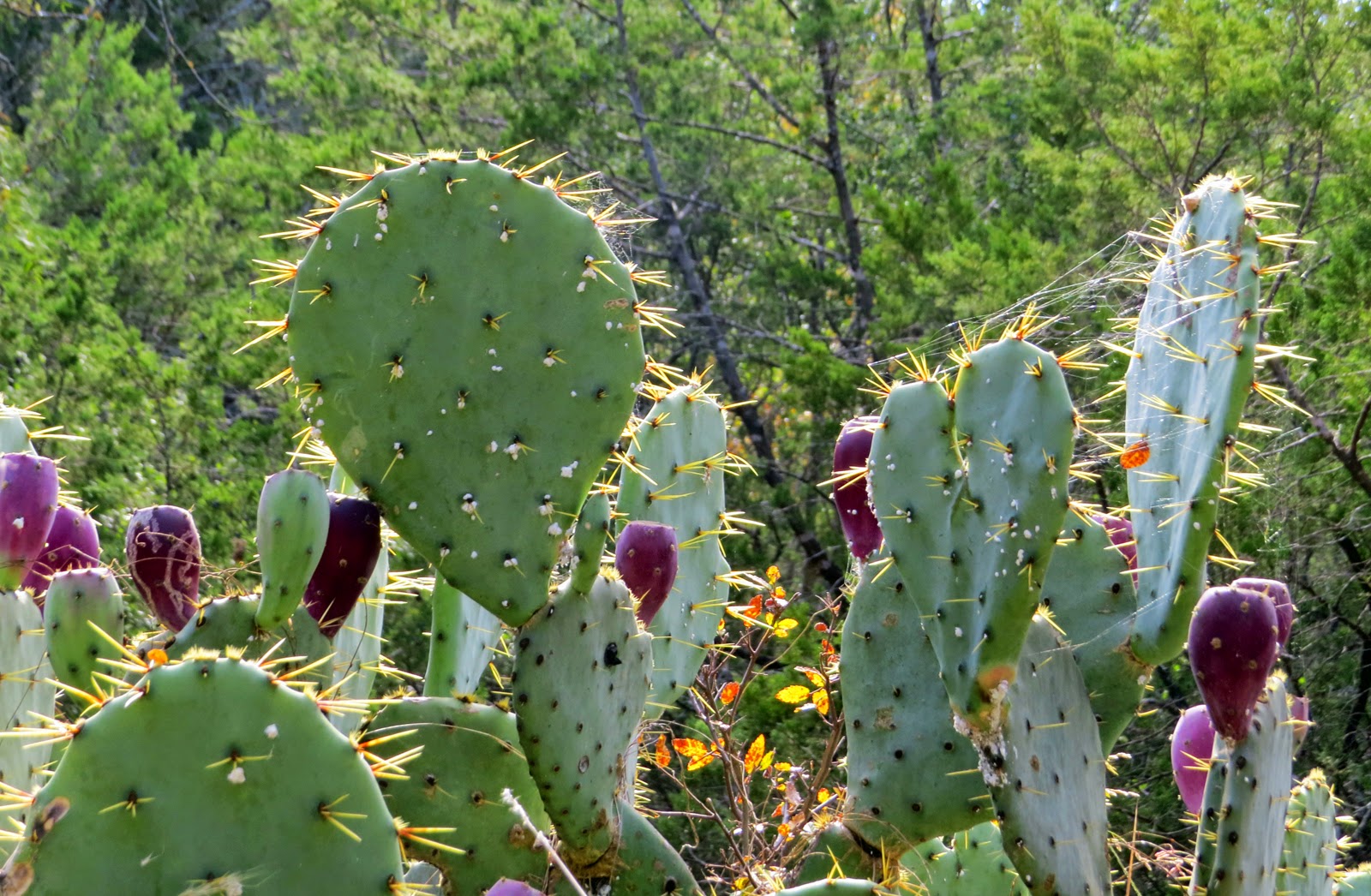 On a more upbeat note, at one point the clouds thinned enough for the sun to light up the spines on this healthy prickly pear long enough for me to get a shot of it. (Well, 5 or 6 shots, but this was the best of them.)

After 6 slow and contemplative miles I wandered back into camp mid-afternoon, but it was still colder than a witches tit, (Though that's just hearsay since, to the best of my knowledge, I've never had any part of a witches anatomy in hand before.) so I retreated to the van for some hot cocoa and a little civilized amusement. 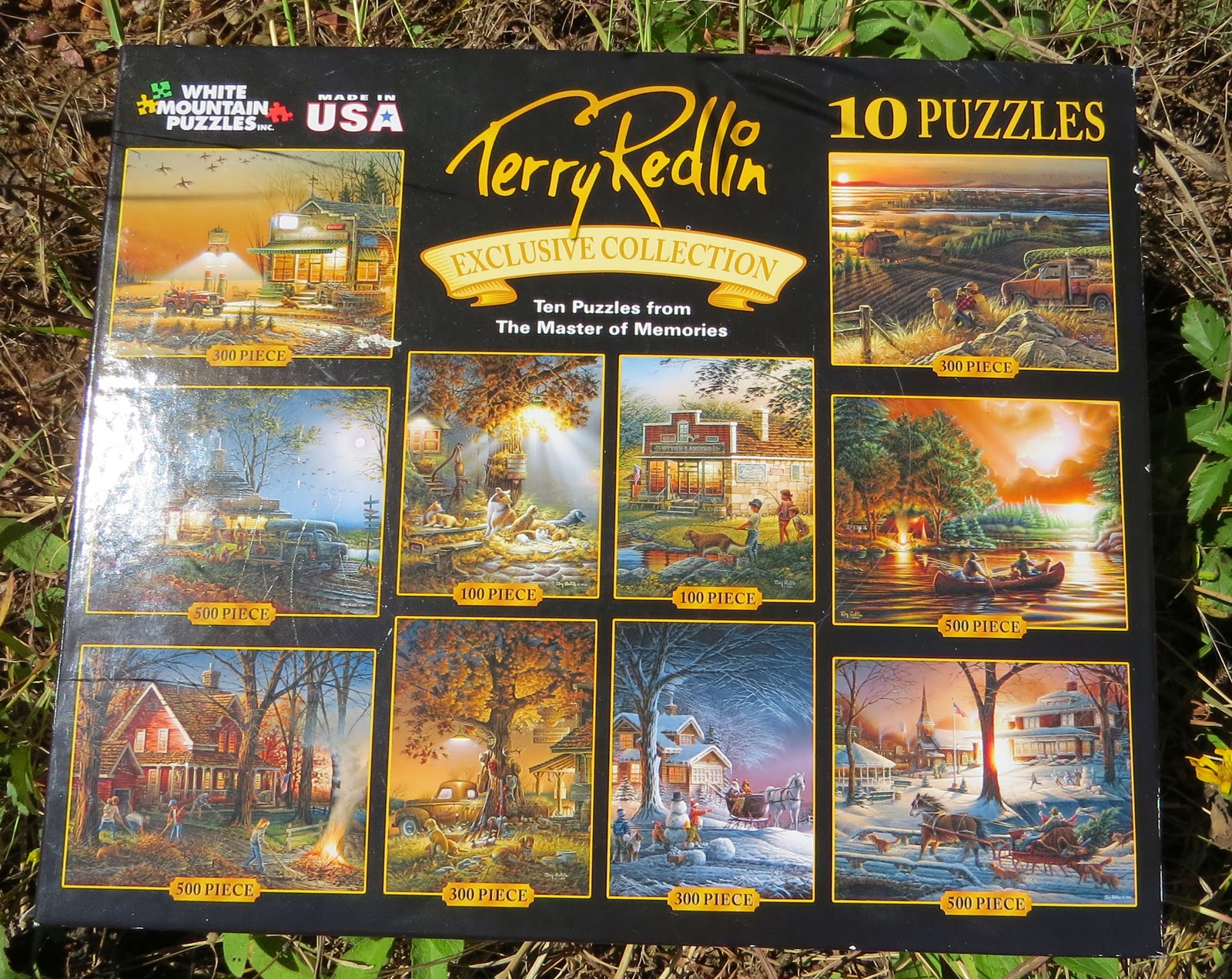 During my last pilgrimage to Cabela's I stumbled across a 10-pack of assorted puzzles, all Terry Redlin images, (Think of him as the country cousin of Thomas Kinkade.) for about $2 per puzzle. Now that's a pretty good deal, (Though my recent best was a 500 piece in an old-fashioned sealed tin for 50 cents I found at, of all places, a Hallmark Fabric store!) but the thing that caught my eye was that the set included a couple of 100 piece puzzles that would fit in a sandwich sized Ziploc bag when in pieces and on a standard sheet of paper when assembled. 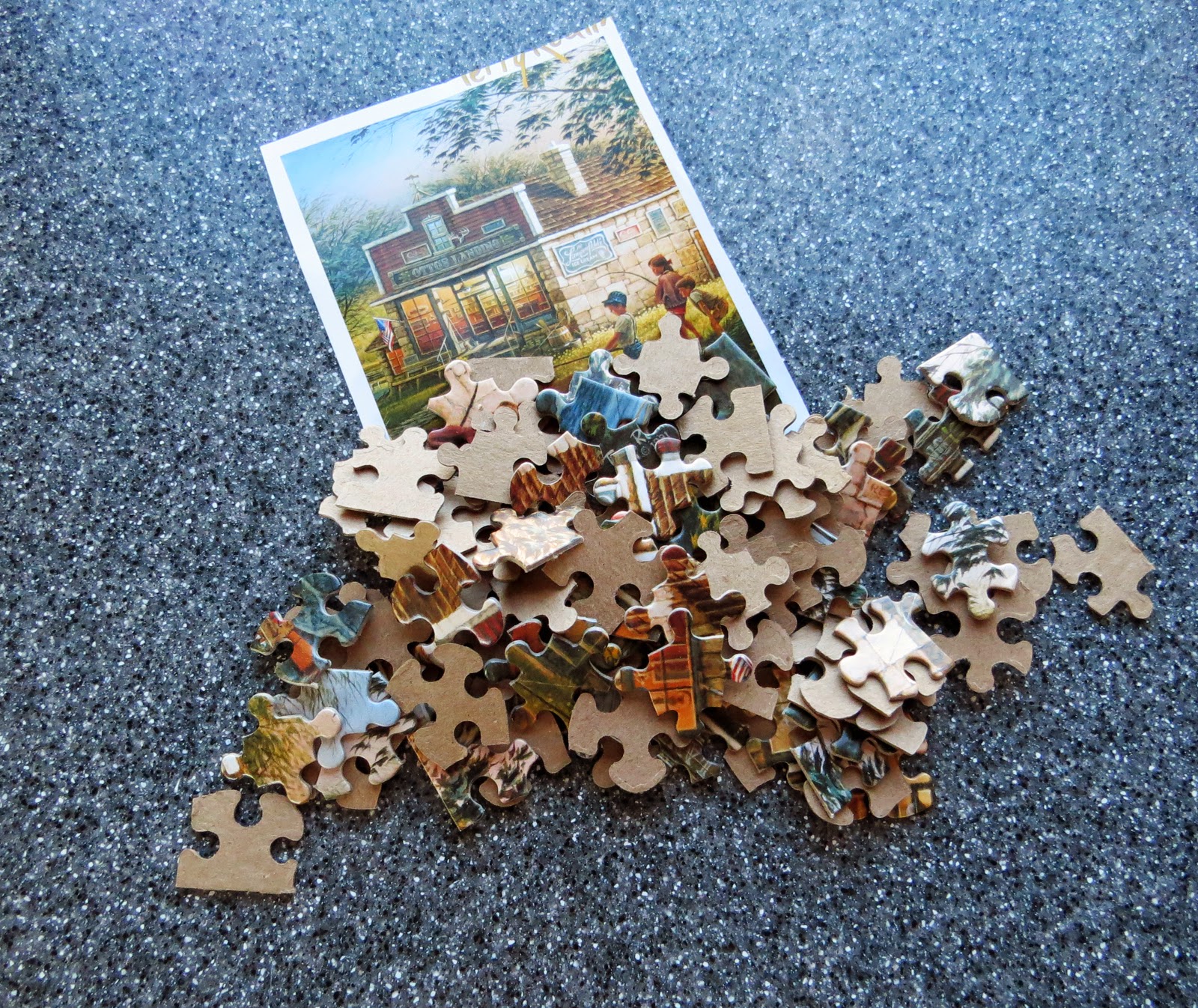 Just the thing for the van where there's not a whole lot of flat-spots to spread out on and no place to store a partially assembled monster puzzle while cooking dinner! 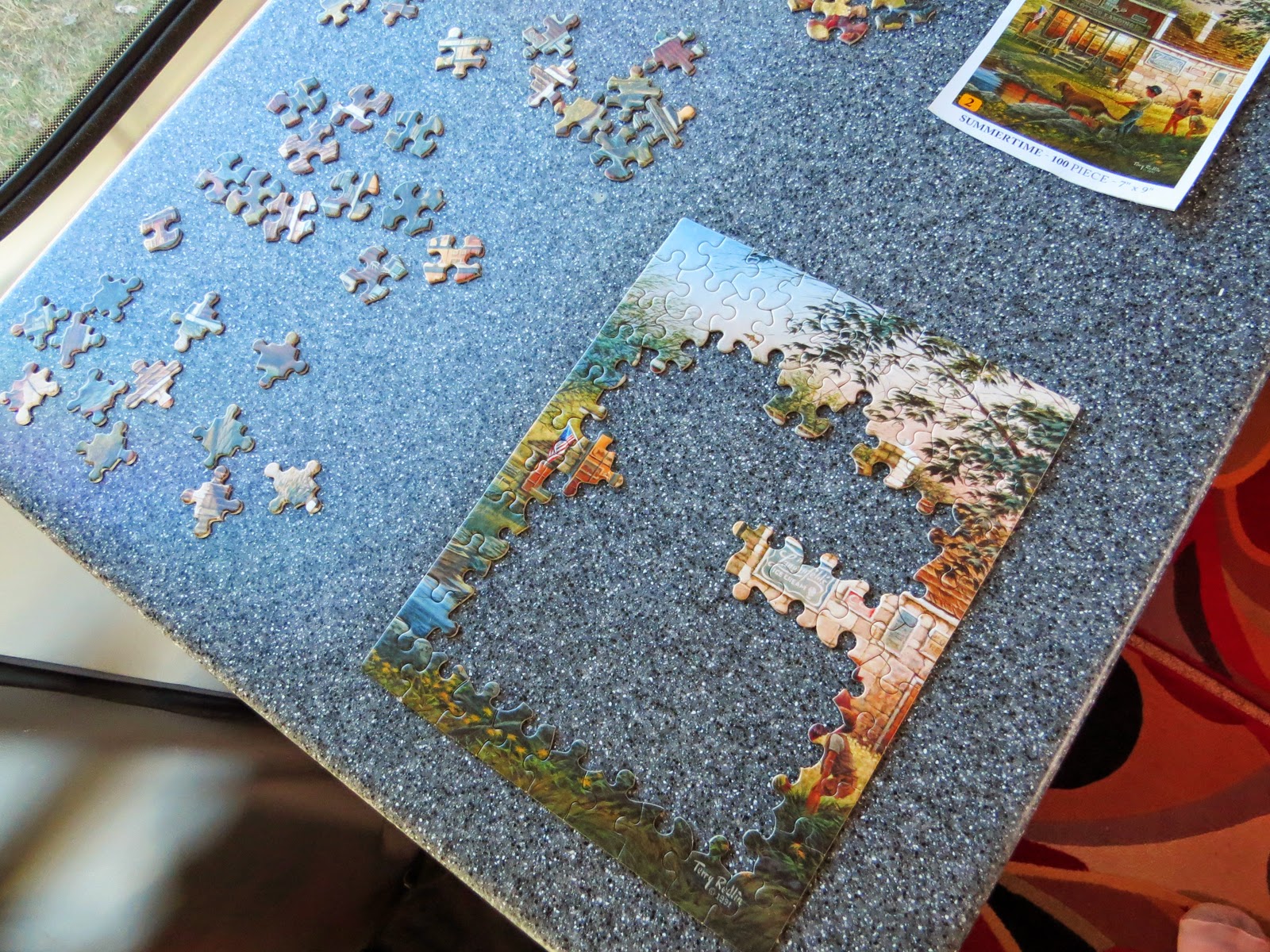 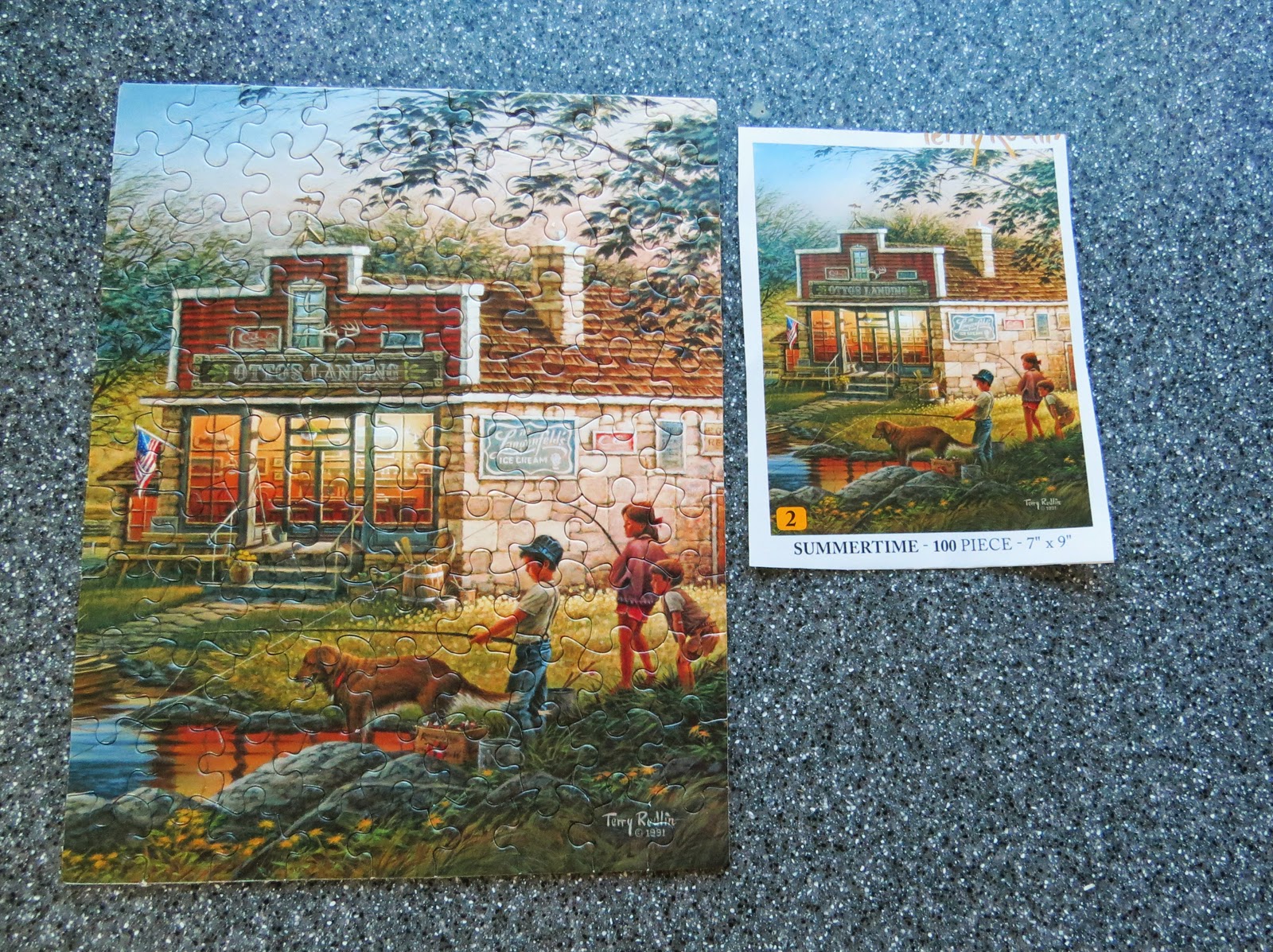 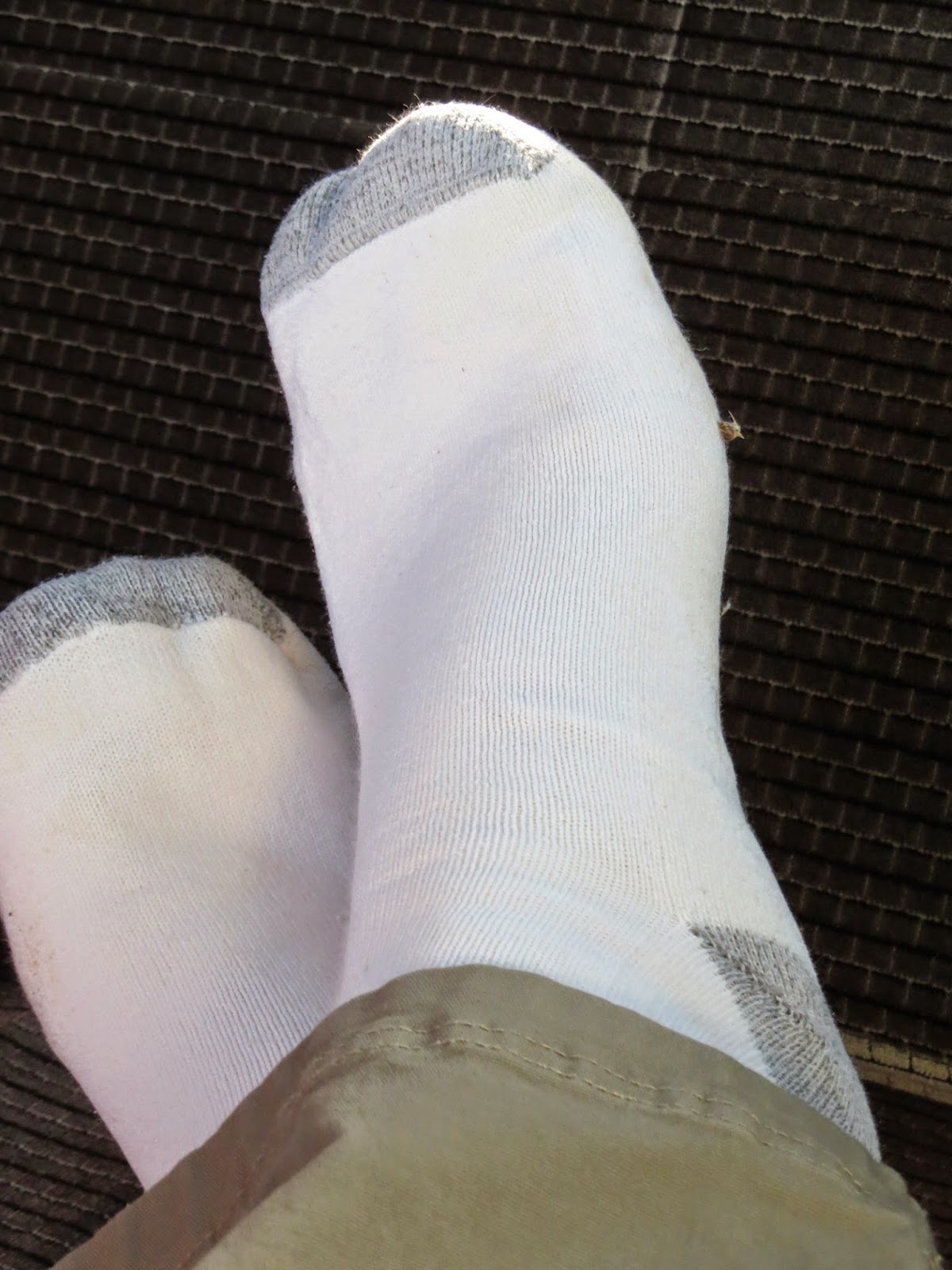 And this has to be the epitome of lazy!!

I was finishing out my day, kicked back in my chair with my feet propped up on the gaucho, and noticed something on my sock. Instead of going to all the effort of leaning forward to check it out, I picked up the camera, which was conveniently at hand, flipped open the LED viewfinder and zoomed in on the object to verify that it was indeed a burr and worth the struggle to bend over and remove. . . 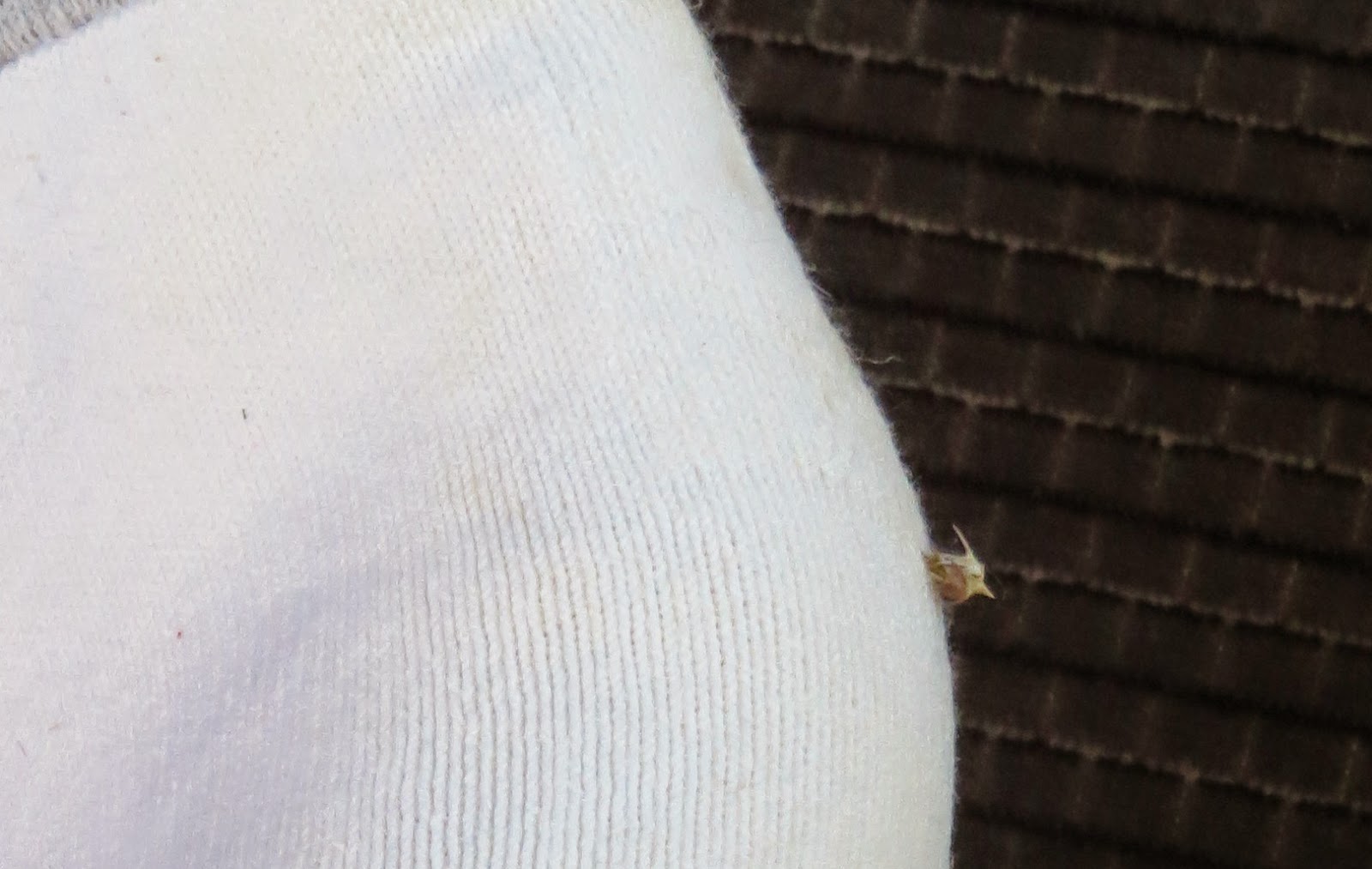