What if: Systems, What I'm doing without


I’m going to start the whole systems discussion with this post on what I don’t plan on having in this camper, which is pretty much the same as what I don’t have in the van plus one or two other items, then I'll get into the systems I will have in some follow-up posts.

After years of experience and pretty heavy use, I’ve pared the systems down to what works for me and eliminated most the ones that I just don’t need, despite the fact that the marketing companies charged with selling said systems strongly disagree and insist that my life will be hell without all the bells and whistles they're flogging.

But then you kind of want to feel sorry for those guys. I mean, trying to flog a high tech system, including a highly hackable app, that allows me to start the coffee maker and open the garage door from thousands of miles away through my smart-phone has to be a tough job!!!

I’ve discussed this before but will repeat it here.

Really?? Just what should I give up in order to fit in a shower that I will use for 10 minutes or so a day?? My closet?  The refrigerator? And then I have to have a water heater to go with my shower plus propane tanks to run the water heater. Why would I even consider giving up over 10% of my very small space for a shower that I would use 0.5% of the time?

By the time I wet myself down, soap up, rinse off and towel dry, all in an elbow knocking space, not to mention the extra time spent cleaning up the mess I just created, filling and dumping tanks and repairing water damage, I can heat some water on the stove and give myself a sink-shower for a heck of a lot less cost in time, stress, fuel and money. 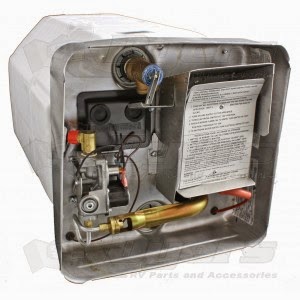 This is an appliance I’ve been doing without for over a decade now, which means I recover two pretty good sized storage areas that I can now use for – well – storage, not to mention getting rid of the weight and a couple pretty big holes through the wall of the camper.

First there’s the space the water heater itself would occupy, a little over a cubic foot, then there's that  12x12 hole right through the sidewall. On top of that there’s the weight, about 32 lbs. when full; and when would it not be full???

And of course you need propane to operate the water heater. The simplest way to avoid running out of propane is to have two tanks. (But for cryin’ out loud, forgo the ‘convenience’ of an automatic regulator that will switch from one to the other on its own when the first tank runs dry!! If you use one of these there will be a day when you find both tanks empty because you didn’t notice when the first one ran out.)

With a two-tank system, as long as you refill the empty tank as soon as possible, you will always have one nearly full tank to operate off and will never run out. But these tanks, even in the petite but uncommon 10 gallon size, are pretty big and must be kept in a compartment that vents and opens to the outside.

You can mitigate this somewhat by going to a single bottle system and accepting that you are going to run out at the most inconvenient times, like when you’re 20 miles up a dirt road; and/or end up wasting part of a bottle’s fill making an emergency exchange at the nearest Home Depot just before heading up said 20 mile dirt road.

So even assuming you settle for a single 20 lb. tank system, that’s another 1.5 cu. ft. of storage space, a second big hole in the side of the camper and around 35 lbs. for a full tank.

So, considering that I typically need only one or two kettles of hot water per day for washing dishes, and myself, I don’t think so. . .

Again, this appliance needs a fixed propane system with all the built in issues that go with it.

In addition. a fixed stove is always taking up counter space whether you’re using it or not and if you wish to cook outside once in a while a second stove must now be carried along and I really dislike duplication of function when dealing with a small space like a camper. 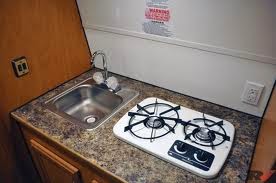 This fixed stovetop is in a really neat little 10' travel trailer built by Carson Trailer, but it sure would be nice to have access to that counter space hidden under it!!

This is an item that takes up space, requires a fixed propane system and uses one heck of a lot of battery power when running! No thanks. . .

My substitute is a catalytic heater that runs off the disposable propane bottles and can store in a relatively small space out of the way when not in use. I typically use it to warm things in the evening and/or first thing in the morning with a window and the vent cracked, I never run it overnight, opting for an extra blanket instead, and usually sleep better for it.

This is another one of those cascading systems. If you insist on having a flush toilet you need to increase the size of the potable water supply in order to have water to flush it with, plus you have to add a blackwater tank to flush it into, plus storage for the hose to empty the blackwater tank with, plus – well, you get the idea.

On top of that I would once again be dedicating a significant amount of prime real estate for an item that then sits unused for the vast majority of the time.

For a boon-docker this sounds nice, maybe even necessary, but it weighs a lot, costs even more, even for a portable unit, and when I did have a generator at least 90% of its hours came from the bi-weekly maintenance run I gave it to make sure it would be functioning when I needed it the next time.

Solar has been a much better solution for me and when that's not enough, like when the batteries get down to 50% charge (Going farther is going to damage them!) because of clouds or a shady campsite, yet I still have supplies and hikes for a few more days, charging them off the engine alternator will get me over the hump. But don't use the engine, or generator for that matter, to charge the house batteries to any more than 80% because you will just be wasting fuel and time as that's about the point where the batteries will start accepting the charge at a slower and slower rate, so you are in the territory of diminishing returns!

After having a generator in one of my rigs, it actually turned out to be no hardship at all to eliminate it from later rigs; so a generator wasn’t even in the consideration for this camper.

That’s right, I said microwave. This is another item that takes up space (Like a month's worth of cereal boxes kind of space!) but gets used infrequently. I have been keeping track and have only used mine a half dozen times in the past 60 or so camping days.) And without a generator or high-capacity inverter and big batteries, it can only be used when shore-power is available.

A small lidded saucepan on the stove, Or better yet, a 1 quart cast iron dutch oven, both of which I carry and use for other things as well, can be substituted for most of what the micro is used for. Maybe not quite as conveniently but I’m pretty sure we’ve already passed the point where the pursuit of, and reliance on, ‘convenience’ is insidiously damaging our quality of life.

If leaving it behind proves to be a mistake then there are a couple spots where I could tuck in a small micro after the fact.

Actually I’m still a little torn by the thought of eliminating the TV altogether, but in reality it usually just turns out to be an annoying obsession; on those rare occasions when I have any TV reception at all that is.

I find that I often end up trapped in front of it while desperately and monotonously trying to find the least offensive drivel to watch on the little box rather than sitting back and enjoying the nature I’m out there pursuing in the first place.

So lately I've been ignoring it, even when camped in places I'm pretty sure I would have some sort of reception. As a substitute I have a handful of instructional videos and a couple boxed sets of old classic TV shows, (Curiously mine, 'As Time Goes By' and 'Last of the Summer Wine' are British shows. . .) I can play on the laptop. 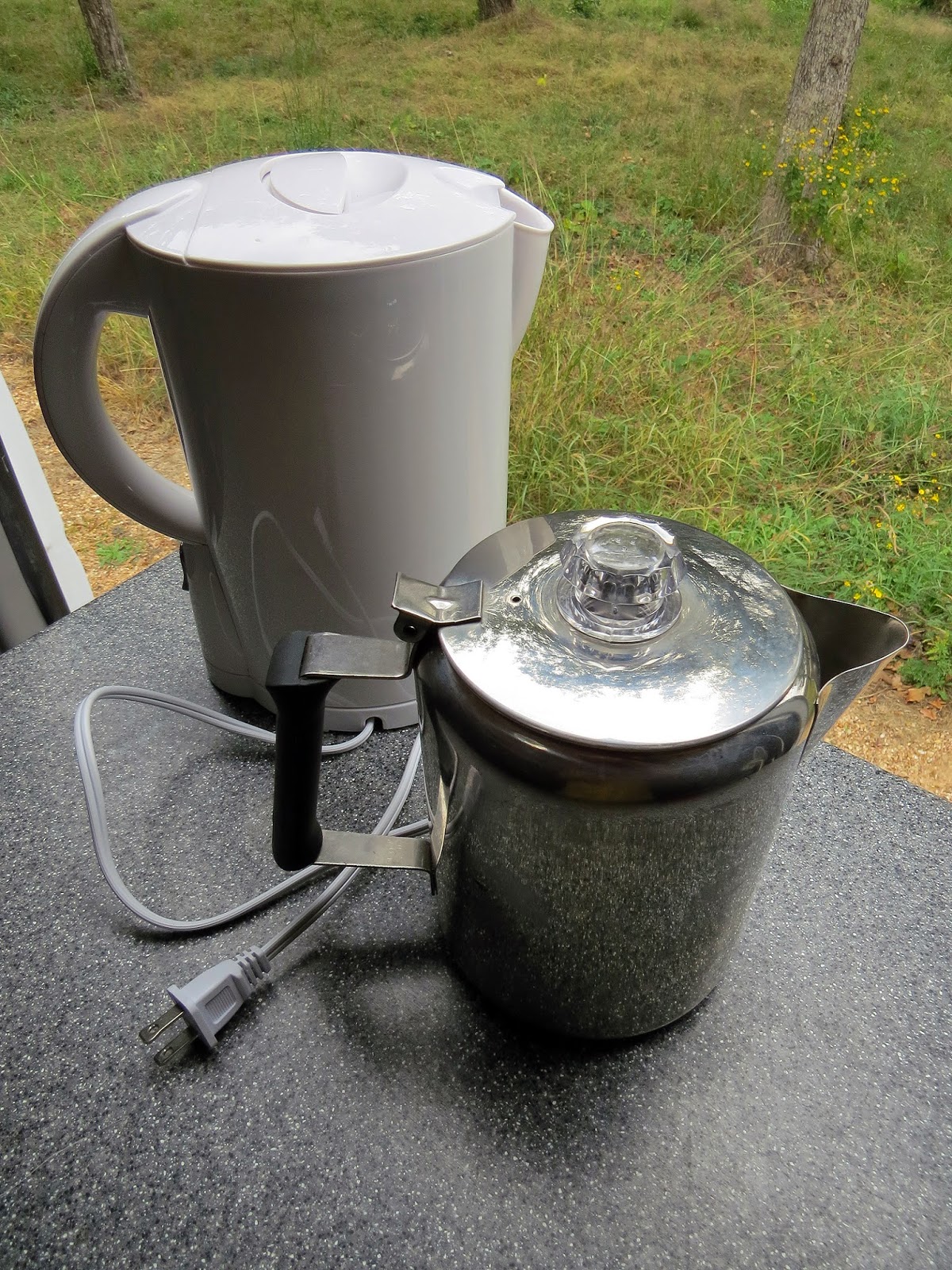 One more item that can only be used for one thing and then only when hooked up to shore power.

Currently I carry both an electric and a stove-top kettle, but I think it's time to eliminate duplication of function and leave the electric kettle at the house where electricity is usually more readily available.

Another 110V item. I've only used mine twice in the past 60 or so camping days and it has already been removed from the van, so that's another item that will not be making the cut for the camper.

Here's a hint. Once the Dutch oven has been loaded up with dinner and heated on the stove to simmering, a couple tea-light candles slid underneath (Larger Dutch ovens require more candles.) with a tin-foil wind shield to keep the candles burning and the heat where it belongs, will turn it into a dandy little slow-cooker!

Currently I have a 'whole house' inverter in the van, but then the output breaker failed a few months ago so it no longer inverts. I haven't bothered to drag that monster up out of its hole, crack it open and replace the faulty breaker yet because, though convenient, I only used it infrequently. And when I did, like say to fire up the microwave for a few minutes, watching it suck upwards of 100 amps at a time out of my batteries was - well - disquieting.

So for these reasons, and one other that I'll get into when I'm talking about systems I will have, I have eliminated it from the camper.

I'm sure there's more I could be putting on this list of 'conveniences' I either do without already or will eliminate from this camper, but the ones listed here give a sample of the thought process that goes into the decision to eliminate them from my camping life.