When you think Nebraska, you probably don’t think tourist destination. And you’re not alone. The fact that there’s only three KOA’s in the entire state testifies to the scarcity of camp-tourists hanging out around here. (Granted, New Jersey has 0 as in zip, but even South Dakota has 13!)

You could argue that there’s nothing in the state but farms and ranches, that there’s nothing but one flat mile after another, but I’d argue that if you got off of I80, (With the exception of 2 miles of I74 and the I680 loop around Omaha, the state’s one and only interstate highway.) if you took the time to slow down and really see the state, you’d find out you were wrong, or at least not entirely right.

When I first began to loosely outline this particular trip, a specific destination in Nebraska came to mind, The Golden Spike Tower, which pretty much defined the rest of the trip. It just so happened that once I got to Nebraska I would have to cross nearly two thirds the width of the state to get to the tower, and in keeping with my resolution to find the good on this trip, I set out across the state with an open mind and a determination to find the interesting.

Which is why I was soon leaving the relatively grandiose US30 (Lincoln Highway) at a point where there wasn’t even a town to straddle the intersection, such as it was, and setting out across the lesser roads as I traversed the hump between the Platte and Loup Rivers. 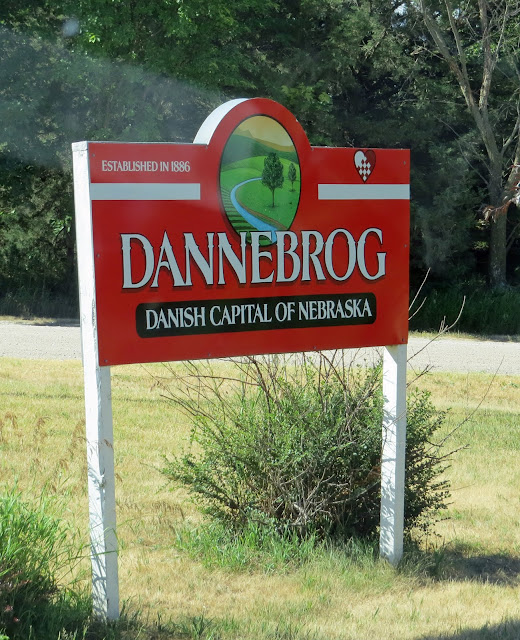 After two more turns, again, intersections without towns, I found myself on SR58 about to cross Oak Creek into Dannebrog (Population 306). 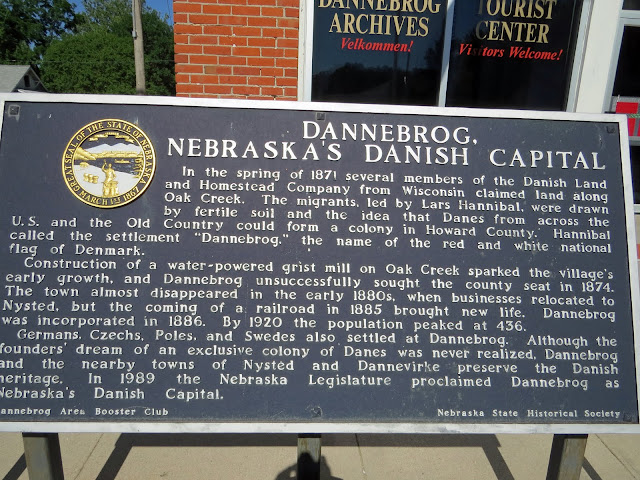 Now you may or may not know that Dannebrog is Nebraska’s Danish Capital. 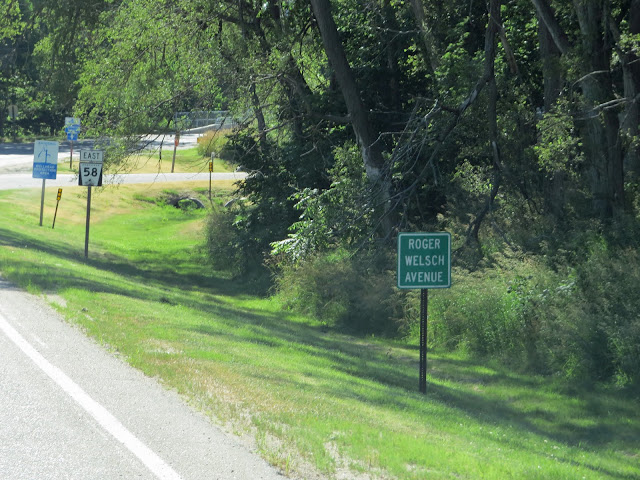 You also may or may not know that Dannebrog is home to Rodger Welsch.

After all, neither Dannebrog nor Welsch are significant enough to have made it into SpellChecker’s dictionary.

So if you don’t know, Rodger Welsch was a correspondent for CBS and is classified as an author and humorist, along with the likes of Garrison Keillor and Dave Berry, but in another time I think he would have actually been called a philosopher, albeit with a sense of humor. (If you ever saw his segment on what we name our children, I think you'd agree.)

And Rodger, though born in Lincoln, now lives in this town of Dannebrog, from where he hosted a PBS/RFD type show called Postcards From Nebraska for several years, during which, in addition to all things Nebraska, he did segments on virtually every business and aspect of life in Dannebrog. 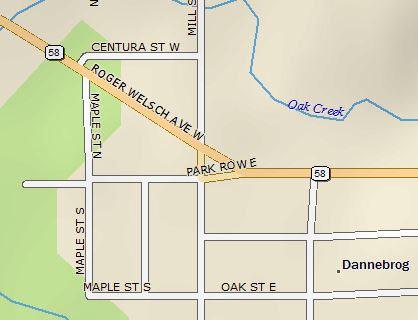 So when I rolled into Dannebrog early on a Sunday morning it was as if I’d been here before.

“If you have no ambition or imagination there’s nothing to do in Dannebrog. It’s like art, you can wait until beauty is lined up nicely for you in an art gallery, or you can go out and find the beauty in its natural context; where the artists find it.” Rodger Welsch 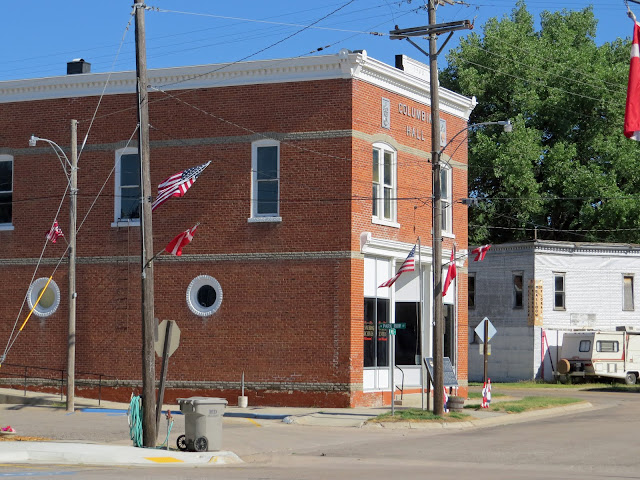 I stood on the corner there in front of the Columbia Hall, empty and for rent in 2009 when last seen on Postcards, now home of the town archives and tourist center. This corner is the figurative as well as literal center of town, bordering as it does, a wide spot in the road, the little paved triangle that is as close as it gets to a town square.

From where I was standing I looked up each of the three streets that converge here, Mill St., north and south, SR58, now also called Roger Welsch Avenue, east and west, and Park Row, east and west, though East Park Row is only that very short little segment that blends seamlessly with SR58 down the side of the grocery store.

These streets form that tiny little triangle that would cause havoc in a larger town, (There’s no median there like the map shows, just open, paved over space.) and from that spot I could see virtually the entire business district, most of which I'd already seen, sometimes more than once, on Postcards. 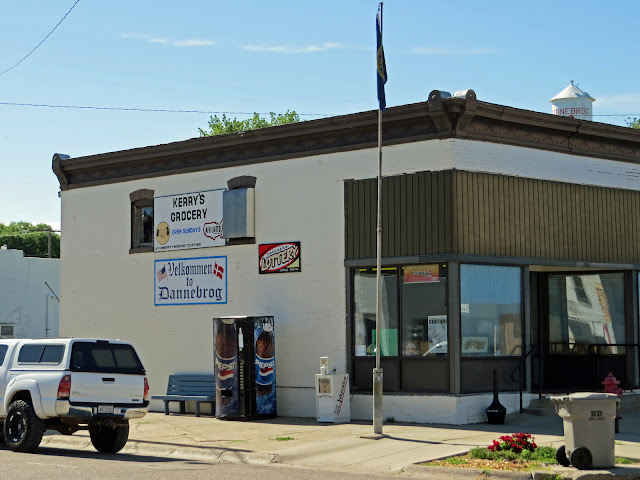 Grundlovsfest, the town's annual weekend long Danish festival, is the first weekend in June, andsince I am here early on a Sunday morning near the end of June the streets are empty, but because of Postcards I know this corner I’m standing on is prime real estate for viewing the parade, and I wonder about the little girl I’ve seen standing here more than once, thanks to the magic of reruns, inching out from the curb with a very determined look on her face, tiny Danish flag clutched fiercely in one hand, waiting for the candy-tossing to commence.

And right out there in the main street in front of me, currently empty all the way to the town limits, I’ve seen cars spontaneously stop, driver’s window to driver’s window, for a short visit while Rodger steps casually off the curb as he discourses on the finer points of small town living. 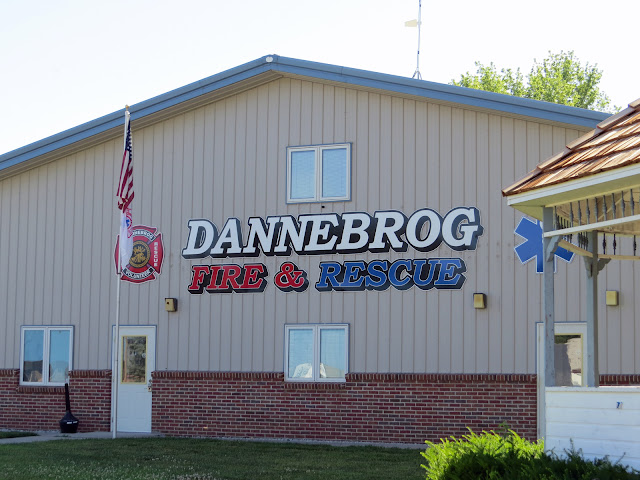 True, things had changed in that gap between recorded images and now, after all, it’s been nearly a decade since Rodger, now  80 years old, did Postcards.

Back then the town’s Fire and Rescue was housed in little more than an extra-long, wood framed, two-car garage on the other side of the road and a block or two further down.

If Mel’s gas station was still around I couldn't find it. Mel wasn't a young man in the Postcards days so maybe the station is closed up while he takes it easy. 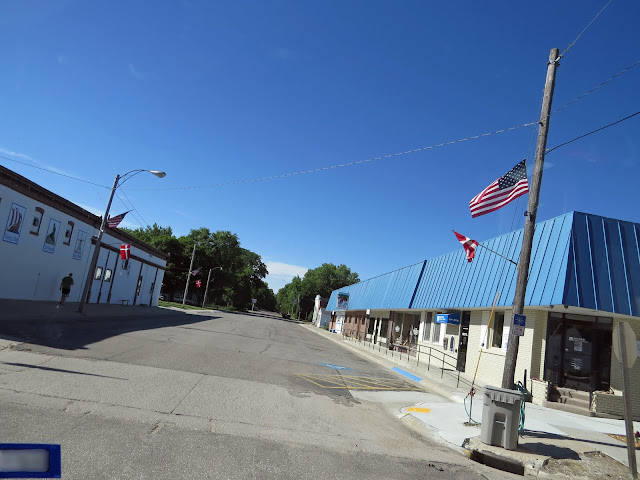 The bank, there on the corner to the far right with the door angled to give it two front facads, is now the Archer Credit Union, 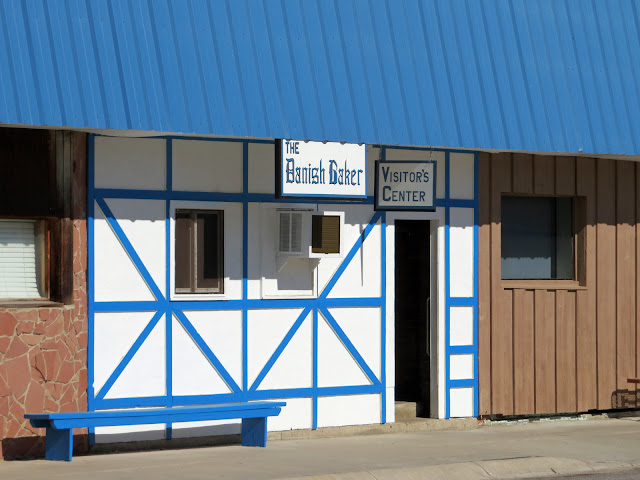 I'm not sure that the Danish Baker is baking anymore, 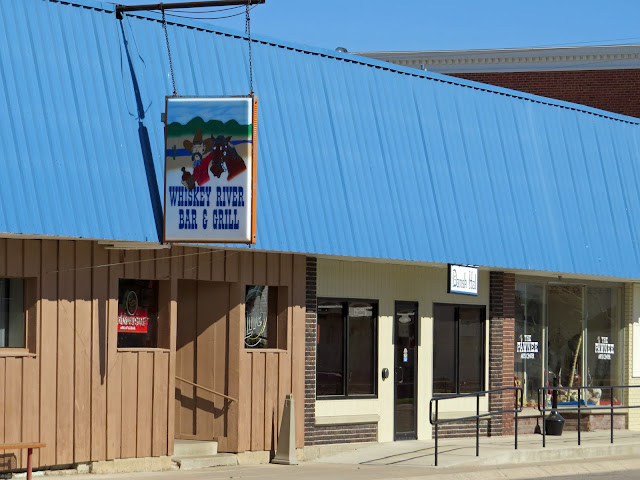 And Eric's Tavern seems to have changed to the Whiskey River Bar and Grill.

Even though I was tempted, it being a Sunday morning and all, the door’s locked so I’m not able to walk inside and see if that table right there behind the Budweiser sign is still full of the guys, Phil the Postmaster, Daniel from the body shop, Sean the part time mayor, Old Bumps the story teller, and Dan the plumber, maybe even Rodger himself, all shootin’-the-shit and solving the problems of the world . 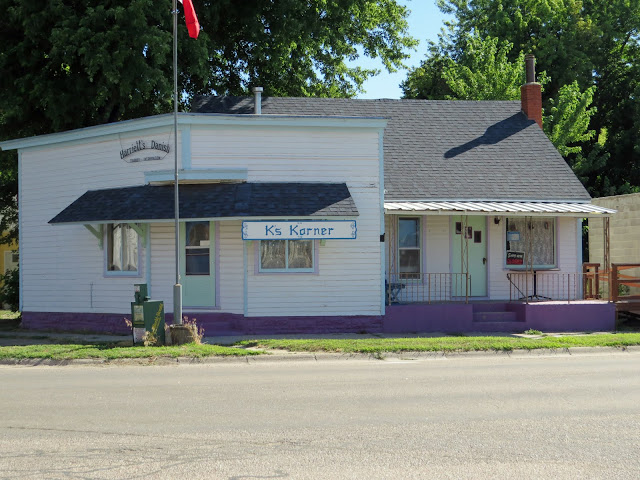 And though the name's changed to K's Korner, it looks like I could still walk into Harriet’s café, the green door with three small windows there on the right. Harriet's was converted from a house by the simple expedient of changing the furniture out for tables and chairs,  has no menu, only eat-what’s-put-in-front-of-you home-style cooking.


"We don't start the gossip, but we sure do pick up a lot of it in here!" Harriet

Well - it looks like I could walk in, if I was here tomorrow, or maybe yesterday. But for now, echoing the empty streets, the cafe is closed. 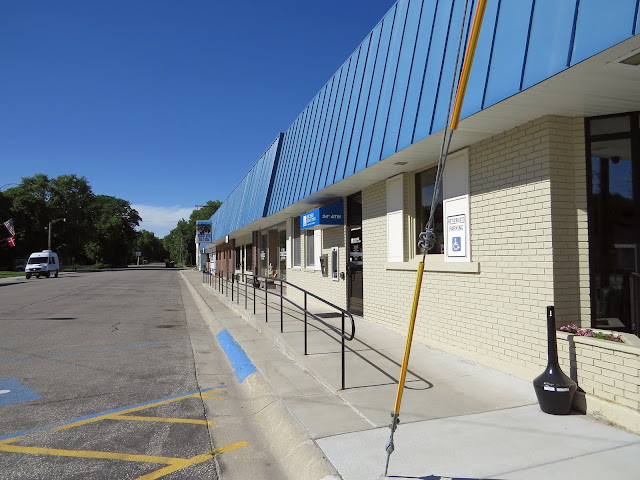 Clearly things have changed between getting to know the town and actually getting here, but not enough to completely hide the Dannebrog I know.

And though Dannebrog isn’t really my town, nestled there near where Oak Creek moseys on into the equally lazy Middle Loup River, in a way it is, and it was nice to be able to drop in for a visit.