The Microwave sparks out:


Like I did with the TV, for the past few trips I have also deliberately avoided using the microwave just to judge how vital it really was to my health and well-being; the result being that it too got the heave-ho before I left on this last trip.

Unlike the TV, which operated on 12V, the micro could only be used when hooked to shore power. Oh, in theory I could run the little 900 watt unit off the inverter, but it always sounded weird when I did, so that was something I didn't do very much; up until the inverter died, then I didn't do it anymore at all. . .

By the way, the inverter, the really expensive 2000 watt inverter/charger (40 amps of charge current.) was past it's warranty period by the time it quit but probably had not much more than an hour or two of actual invert time on it. What a waste of money that turned out to be!! (My decision to install it in the first place so nobody to blame but me. . .)


And let me tell you, for a little 900 watt thing that micro was heavier than I expected!

I haven't bothered weighing it (Yes, I carefully wrapped and stored both the TV and Micro in case I ever decide to pass The Van on to someone else.) but I doubt I can jam that much weight in supplies into the three very useful baskets that now reside where the micro used to be.


The baskets are kept in place with a couple of $3 spring-style curtain rods. Fortunately the smallest rod at the shortest setting just fit. 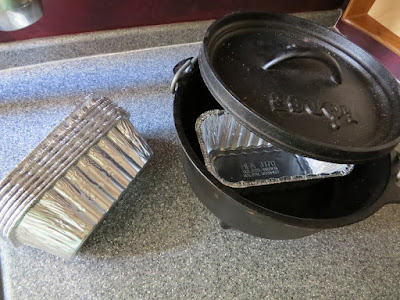 As a substitute for the microwave I've found that those little disposable loaf pans loaded up with whatever and dropped into a half inch of water in the bottom of my Dutch Oven work just fine. Sure it might take just a little longer, but only a little, and the cleanup is easy.