Not Holding Water; A Kettle Fail

I have one of those electric, auto-off, kettles and it's very convenient; if I happen to have shore power. But since that's often not the case, my mainstay is a stove-top kettle in which I heat the water I need for washing dishes, and myself, and making tea or oatmeal.

Over time I've decided that the most efficient kettle form for that is the classic tapered camp kettle. Admittedly that's based more on impression than scientific methodology, but that's good enough for me. 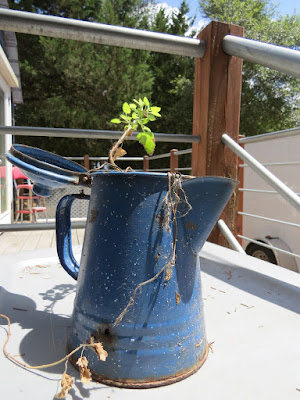 Now being a traditionalist, (That's what us old farts call ourselves because it sounds better than - well - old fart.) my preference is for the quintessential blue-enameled kettle. Unfortunately my long-time companion, a kettle that fit that bill very nicely thank you, finally bit the dust after many years and several different camping rigs, and is now a planter (Although it probably spends more time holding dirt and a few dead twigs than it does actual plants. . .)  And apparently in the interim between buying that kettle and needing to buy it's replacement, a couple things happened, both rather annoying.


First, apparently we've become such a coffee addicted species that it's now impossible to buy just a plain ol' camp kettle. Every dang one of 'em on the shelves today is stuffed full of the guts necessary to make it a half-assed percolator so it can be called a coffeepot. Well maybe I'm a odd dinosaur, but I don't drink coffee. (I used to be a standard, run of the mill, odd duck, but - well - you know, I have my geezer card and all now, so I think I've gone beyond anything so modern as the duck stage.) So I don't have much choice but to pay for the extra guts and just throw them away.


Second, and in the long run, most annoying, apparently the cost of adding that little thumb tab on the lid so the kettle can be picked up and lid opened all with just one hand, turned out to be too much for the manufactures, (Exactly the same reason there's no vent on gas cans anymore. Not because it makes the can function any better, quite the opposite in fact, but rather because it's cheaper to make them without the vent.) and all the current offerings now require two hands to perform this seemingly simple function, because without the little thumb tab, it takes a whole other hand to open the lid. 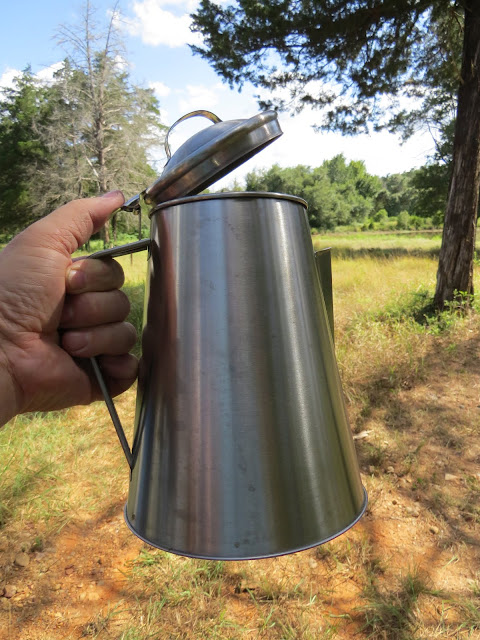 All that is, except for the Ozark Trails 8-cup coffee pot, (Which is really a camp kettle with really, and I mean really, thin stamped metal percolator guts.) sold only in a non-traditional stainless steel finish, and, of course, through Walmart. For some inexplicable reason this, and only this kettle, still has the thumb-tab on the lid, at least in the places I looked.

Great!! the answer to my problem.

Now I've got nothing against Ozark Trails per say. True, their gear is, at best, manufactured with adequate materials to adequate standards in order to hit a very low price point, but come on! You have to know that up front since it's, for all intents and purposes, a Walmart brand designed to be sold in Walmart stores.With that limitation in mind I've found Ozark Trails gear to perform pretty well; except for this kettle. . . 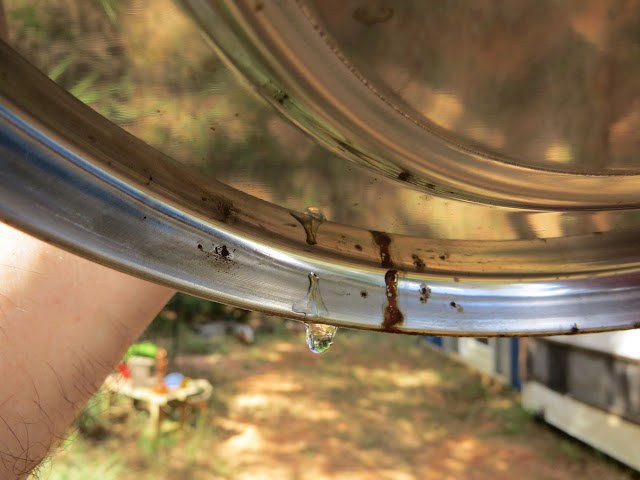 After a disappointingly short time-in-service, as in not much more than one year of actual trouble free use, this kettle has developed at least 7 pinhole leaks in the joint between the sides and the bottom. When the kettle is cool only one or two of them leaks, (I assume the others are blocked by rust and scale.) but when heated up the others start to run free too and water comes out the bottom faster than I can pour it out  through the spout.

I guess I'm just going to have to settle for replacing it with one of those tab-less kettles and suffer with the two-handed operation.

At least I'll have my traditional speckled-blue enamel back.