The Canyon Rim Trail is convenient to the Honey Flats campground. In fact the trail-head is right there at the northeast turn-in to the camping loop,so it seemed a logical first hike. 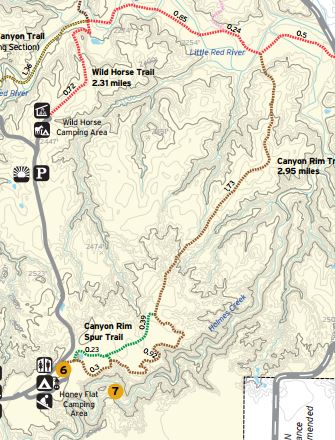 Technically there are few loop trails in this park, but you can usually string several trails together to make a loop(ish) out of them. Today my plan was the Rim Trail to Wild Horse to the equine camping area then skirt along the road for the final climb back to the campground. 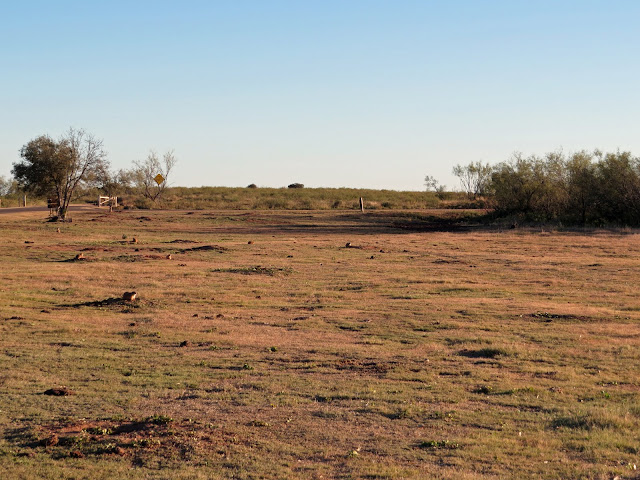 To get from site 5 to the trail-head (just beyond that road barrier there at the top left.) I had to cross prairie dog town, stepping carefully, 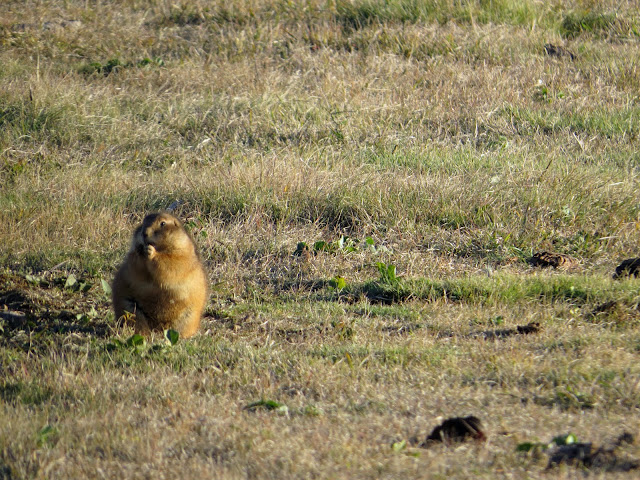 and watched closely, along the way. 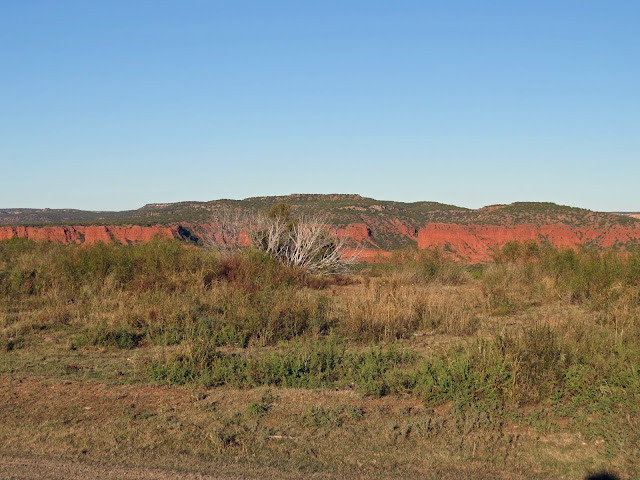 I have to admit though, the prairie dogs do have a nice view across the canyons to the escarpment to the west. 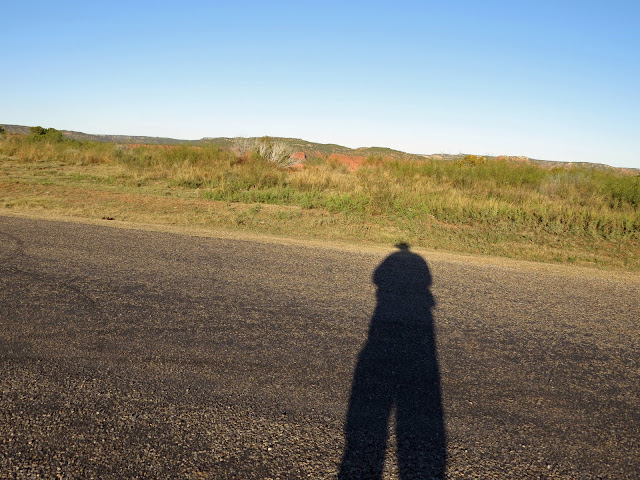 A quick selfie just before starting down the trail. Hey, do these pants make my butt look big?? 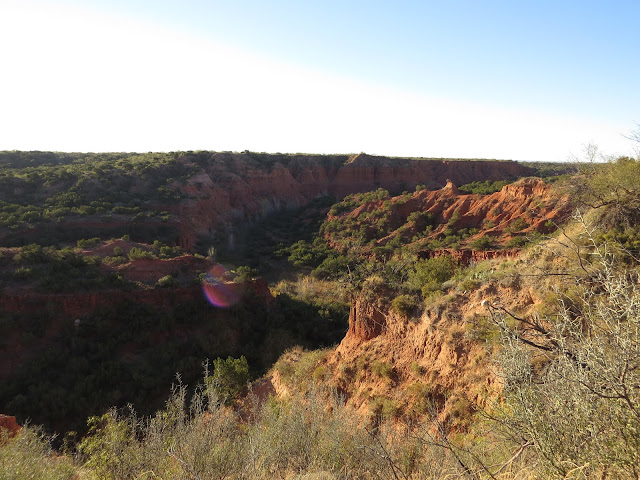 True to it's name 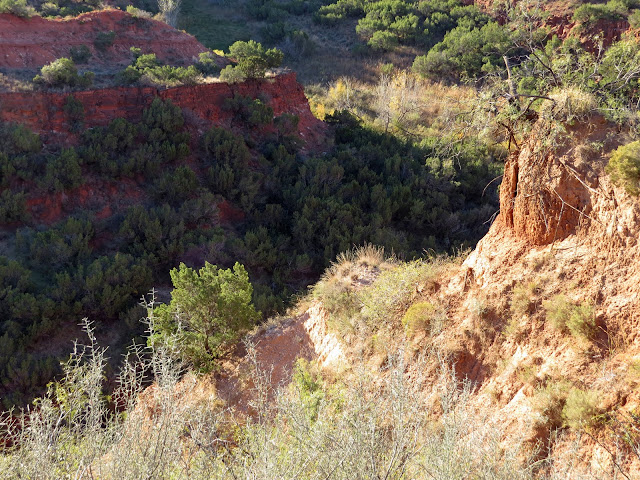 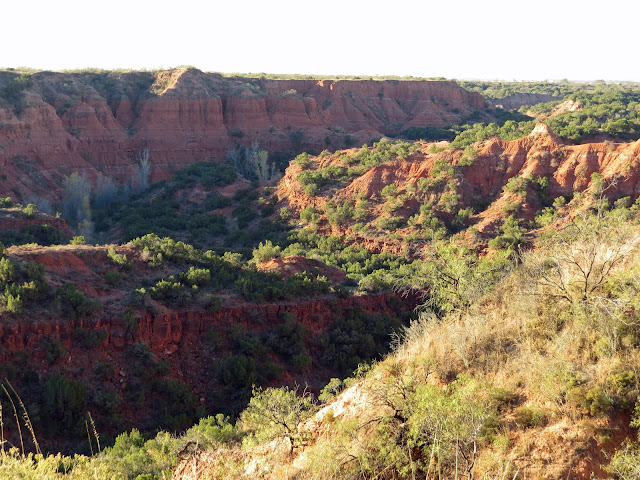 tracks along the rim 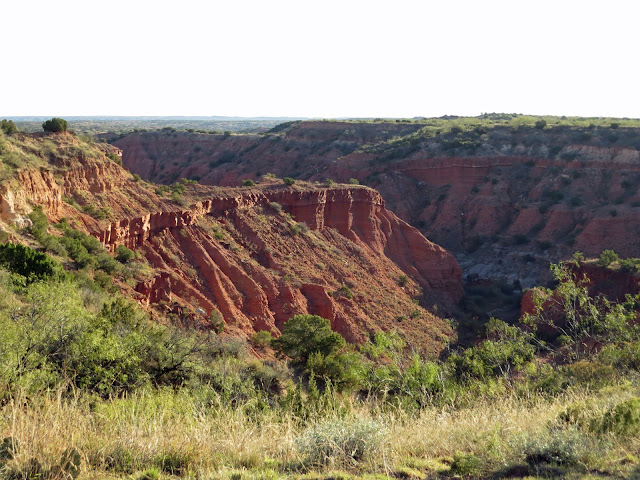 of the Holmes Creek Canyon. 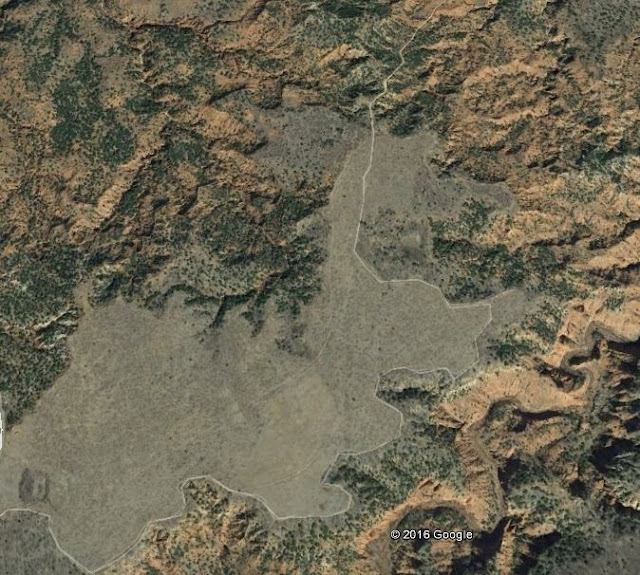 The good news is, the views are great! 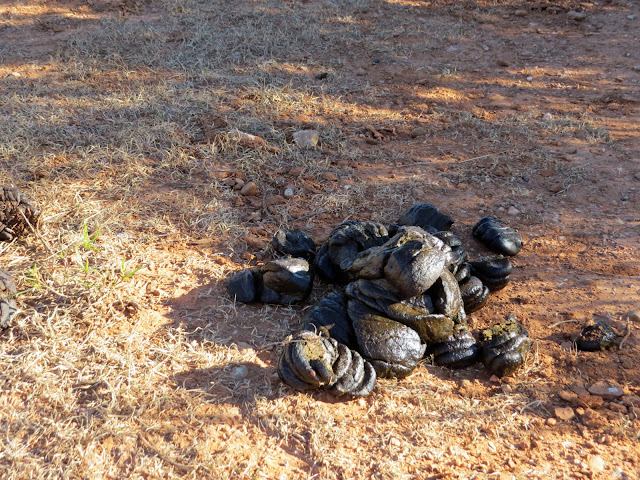 which makes for good bison grazing.

Yep, that's nice and shiny and fresh, and right in the middle of the trail. 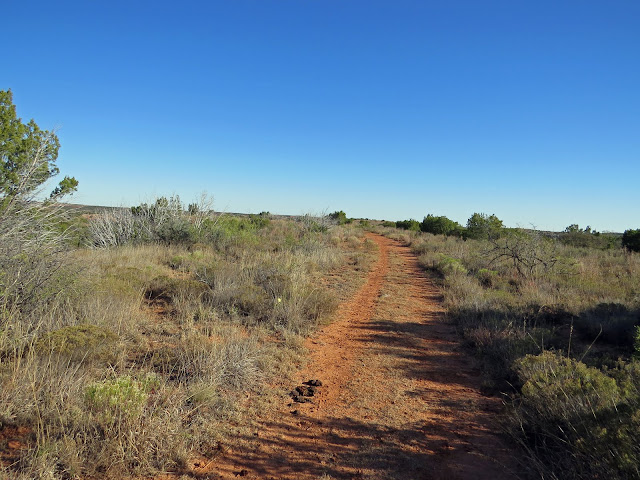 Wait! What's That Lurking up there in those trees??!!!

Umm, now I'm kind a wishing I threw some spare underwear in my pack. . . 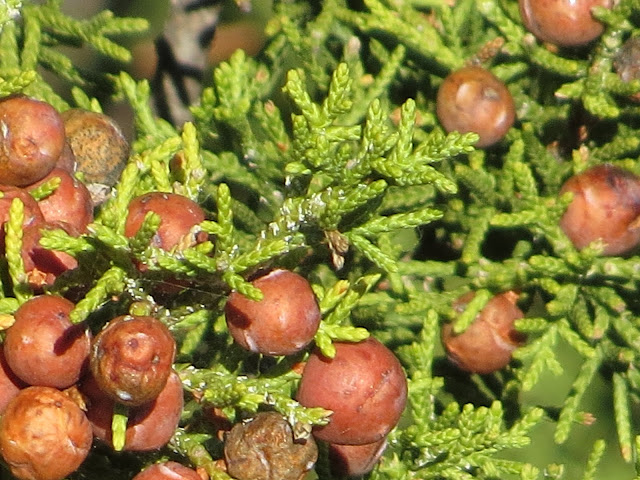 In this light these kind of look like apples left on the tree too long, or even some weird potato that grows in the air 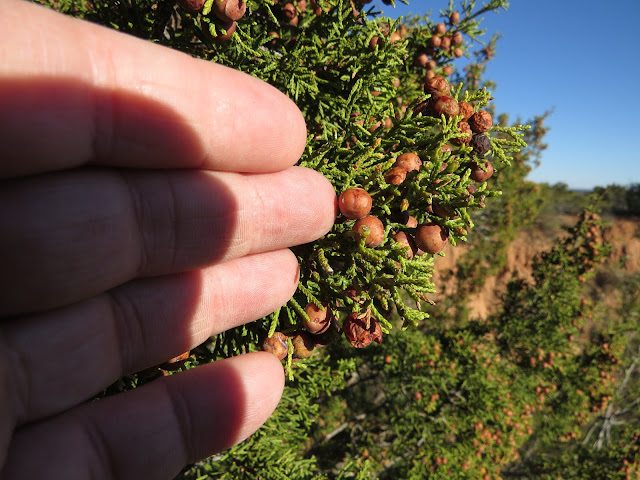 but it's the berries of some sort of cedar. 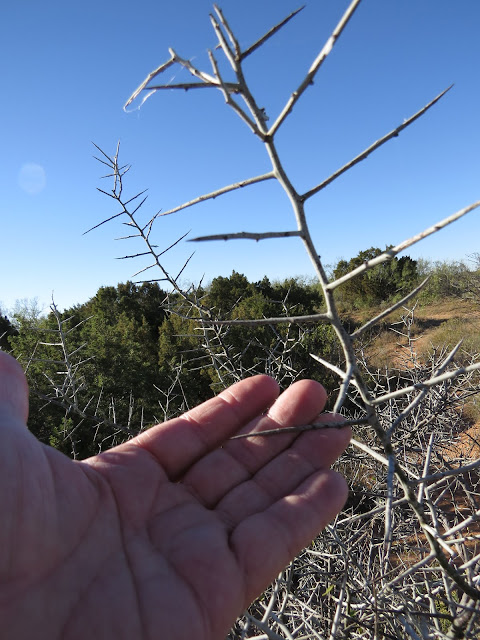 Not all the flora around here is benign, so watch what you're backing into!! 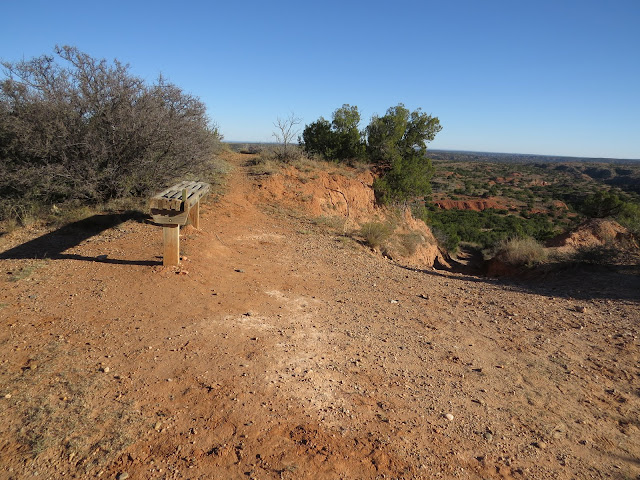 OK, there's a good reason that bench is right there. No, that's not the trail there beyond the bench. The trail is actually over to the right. 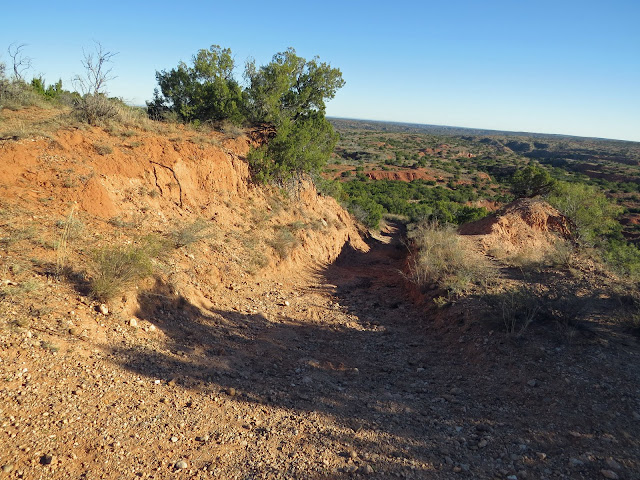 Seems I've run out of escarpment and from here it's nearly 350 feet down to the hike's low point at the Little Red River. 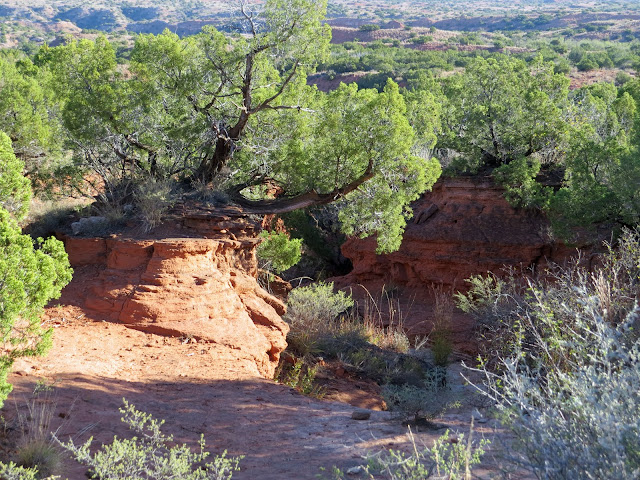 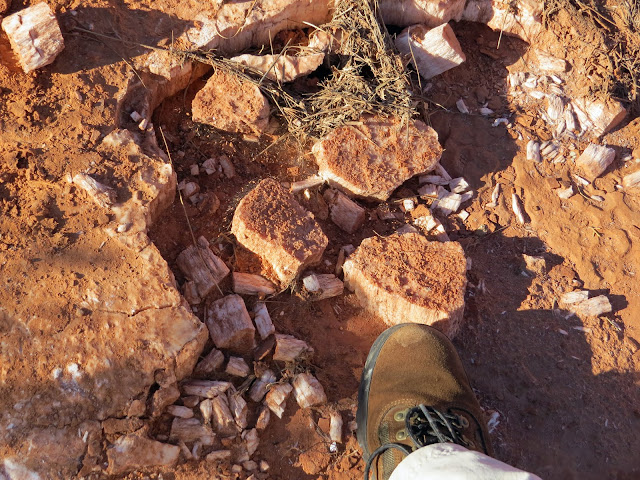 Once I was over the edge and up-close and personal with the eroded land below, I started running into multiple of layers of gypsum. 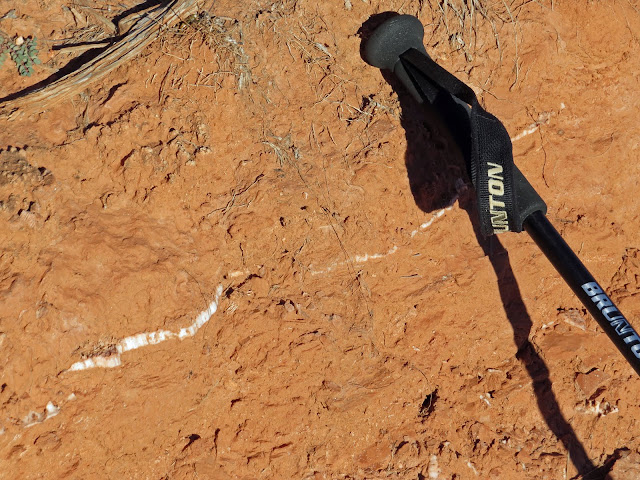 Some of these layers are nearly a foot thick and others are barely the thickness of a pencil. It all depends on just how much water from the shallow seas that once sloshed here evaporated and deposited their minerals before another round of sedimentation swept in to cover the deposits.

Once I was over the edge of the escarpment and working my way down into the canyons it was clear from the number of different layers of gypsum I was finding that this evaporation and sedimentation cycle happened many many times around here. 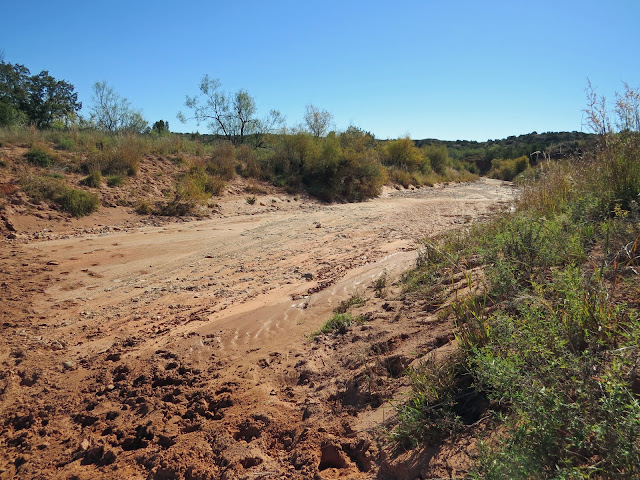 It was a knee-busting slog in places, but eventually I made it down to the Little Red River in the bottom of the South Prong Canyon. No need for my water-shoes today, but the sandy soil is wet, and even muddy in some spots. A reminder that you need to pay attention to the weather, especially rainfall, in this country. 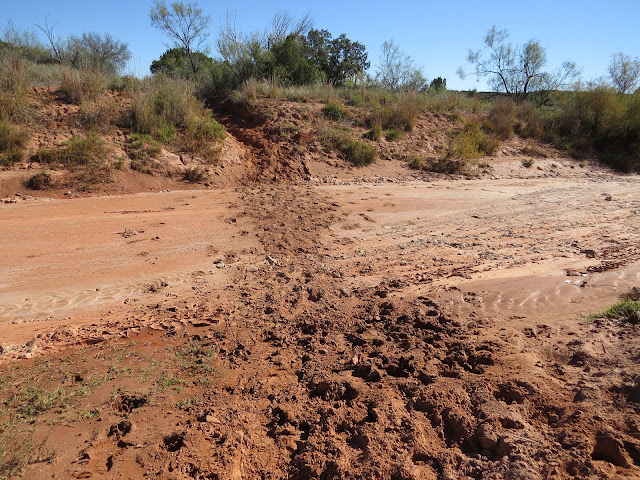 From the number of tracks crossing the river here you might think this is a pretty heavily trafficked trail, but the only two-legged critters I saw all day were 4 trail riders (On horseback not bike.) and one two-stick hiker, which I'll get to in more detail in a moment. 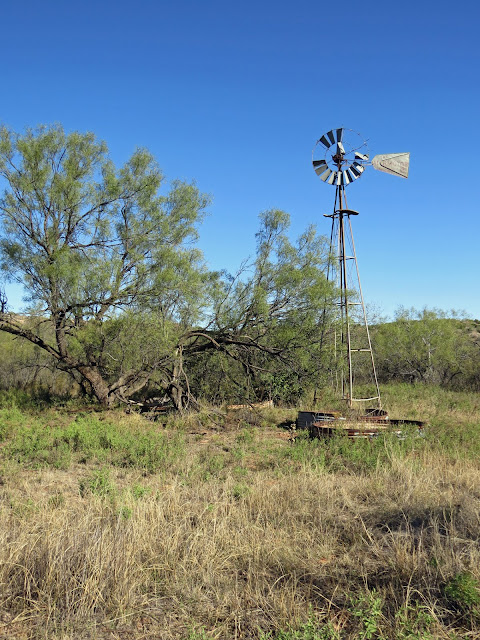 Not far from the river crossing is an old watering station 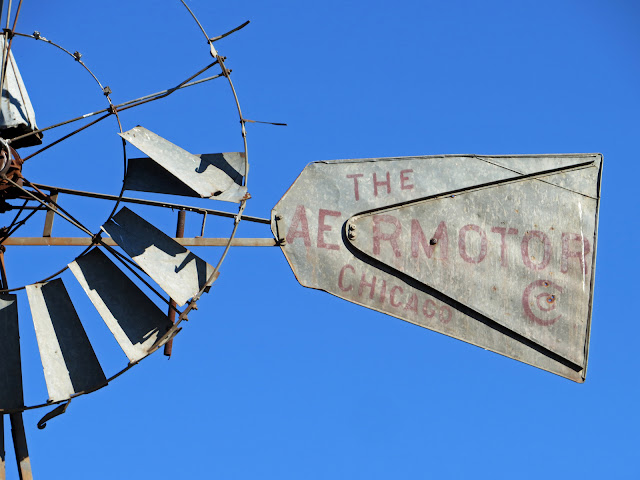 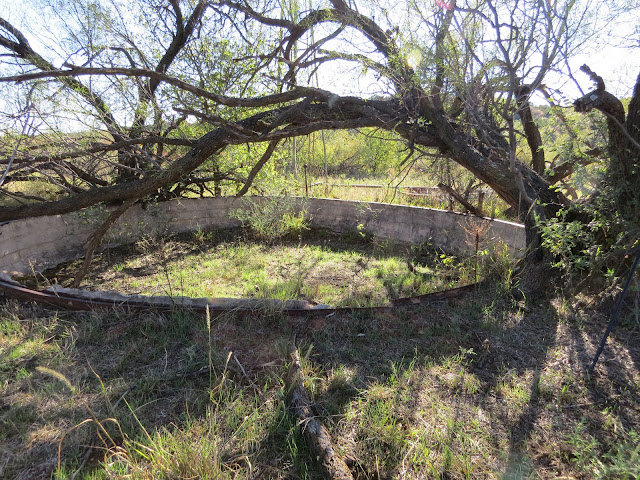 that I decided was the perfect spot for lunch; and maybe a nap since from here it was all uphill!

This is some 30 or 40 yards off the trail, but while I'm there, kicked back in the shade with a book, alternating between dozing and reading, (Doesn't everybody carry a book with them on hikes??) I hear the distinctive click-click-click of a fast moving two-sticker. In this case, an old guy, (Although I can no longer tell by looks if someone is older than I am or not since internally I stubbornly cling to the 30, maybe 40, year-old version of myself.) a clueless tourist in shorts, tennis shoes, T-shirt, bare headed and one, mostly empty, water-bottle dangling from his neck, chugging along, snapping his two walking sticks sharply into the ground at each rushed step.

I can describe him so well because when he saw me stick my head up at all the racket (Hey, I'd probably be using two sticks as well but I need to keep one hand free for the camera.) he stopped short and hollered over, asking if I knew how far it was to the county road.

Well it was only a half mile or so, and there is supposed to be a trail leading out there, but the county road we're talking about is a rugged, muddy, two-track, high clearance wannabe-road that's a long ways from anywhere. When I asked if he was parked out there he admitted that he wasn't but must have missed a trail somewhere and now his plan was to get to the road and see if he could catch a lift back to Honey Flat where his wife was waiting in the trailer.

Well in my opinion that was a terrible plan and when I questioned him on it he admitted that he didn't have a trail map with him!

How people like that survive in this life I have no idea.

I pulled my map out of the cargo pocket of my pants (As always I also have a trail map on the GPS too.) and helped him get himself oriented. He didn't seem to be too sure of himself, but as far as I could figure, he started that morning by dropping into the canyon on Eagle Point trail then somehow got onto the Lower Canyon Trail but missed the turn onto Wild Horse (How I don't know since there are three or four signs and a bench at that intersection, including one sign that specifically points the way to the equine campground and road.)

At this point he asked which way I was going and I quickly claimed to be headed deeper into the canyons since by now I knew I didn't want to spend any more time than I had to with this yahoo.Since we were almost within sight of the Canyon Rim Trail intersection I pointed it out to him. It would be a long, uphill slog, but at least it would dump him out right there at the Honey Flat campground and he would have a good chance of getting there before the sun set and the temperatures dropped.

I climbed a little rise so I could see then lurked in the shadows until I saw him make the proper turn onto the Canyon Rim trail. At that point I figured my responsibility was over. He was headed in the right direction and his once nearly empty water bottle, a plastic bottle from the store hanging from a shoelace tied around the neck, was now sloshing with half the contents of my emergency liter which is always tucked into the bottom of my pack. 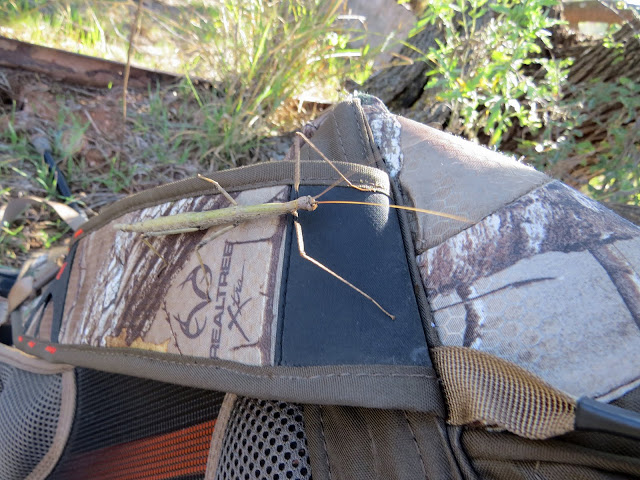 After that encounter I figured I deserved a little more rest-time and when I did eventually gather myself to start the second half of the hike I nearly had a hitchhiker anyway. Though I'll bet this guy would have been much better company then that two-sticker. 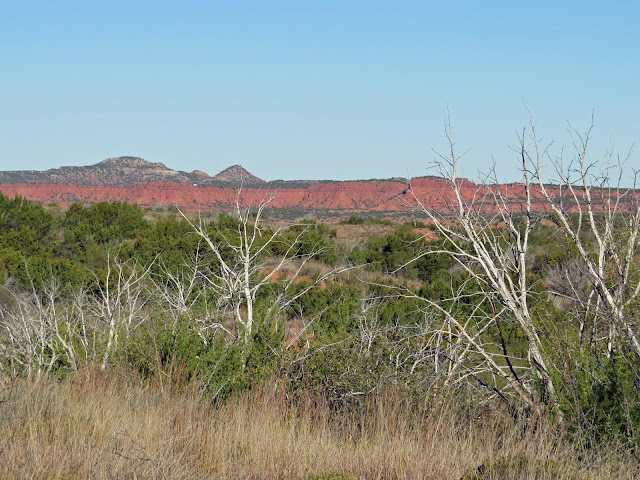 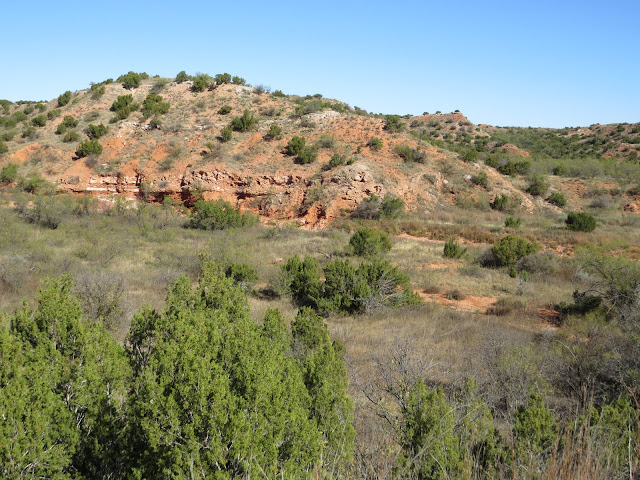 Once I got to the equine camping area I did have to close the loop by using the road but there was virtually no traffic so it wasn't too bad.

My original plan was to kind-of bushwack my way along parallel to the road rather than right on it, but no sooner had I started picking my way through the scrub than I became aware of a half dozen or so bison who were also bushwacking along through there, (No photos because I was too busy trying to freak out quietly!) so I backtracked a bit to give them some room and from there on stuck pretty close to the road! (OK,I really should give some thought to keeping spare underwear in the pack. . .) 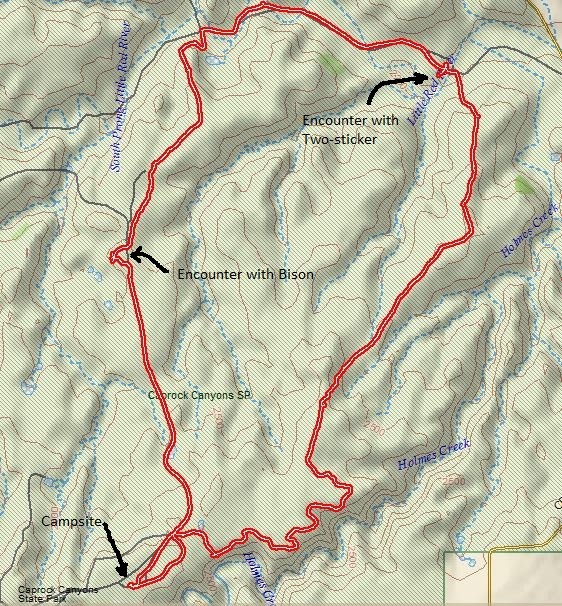 All-in-all not a bad way to break my summer-long hike fast.