Northbound out of Childress on US-287 (Childress is the last place for any serious shopping and stocking up.) you'll temporarily slow down for the tiny town of Estilline where you'll pick up SR-86 West. But keep a sharp eye out because it's an easy turn to miss. (Warning, Estilline, population 141 and dropping, once ranked as the #1 worst small town speed-trap in the nation! The simplest, kindest and most intelligent solution to that is to STOP SPEEDING! Of course for a healthy percentage of Texans that's just crazy talk, pure blasphemy; akin to telling a person to stop breathing!)

In the 50's Quitaque had some 60 businesses servicing the farmers and ranchers of the valley, today there's a small grocery store and a two-pump gas-station. (If you happen to be one of the remaining farmers/ranchers there's also a bank, a hardware and farm-supply. Oh, and of course the co-op.) 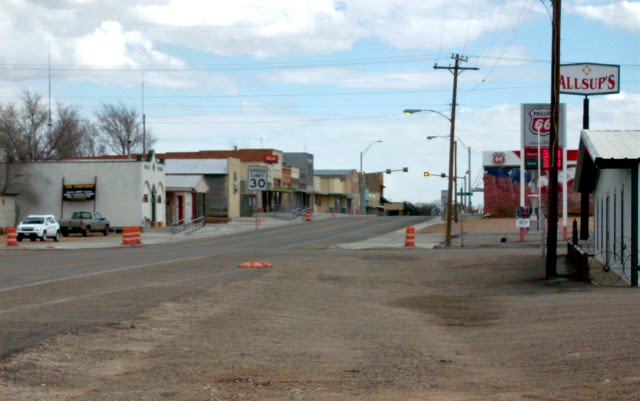 The drive across this part of the southern plains is made up of sweeping views across wide valleys alternating with sharp dips through rugged washes.

This time of year, November, is cotton harvest around here. Some fields are still in full leaf with a heavy white dusting of open bolls, but this late most fields are either already stripped and bristly with ankle-spearing stalks, or in the process of being harvested (Technically called stripped.) by big combines followed around by dual-wheeled tractors pulling massive collection bins that are hydraulically lifted to dump into mobile compactors that churn out big square bails with a shower-cap on them, 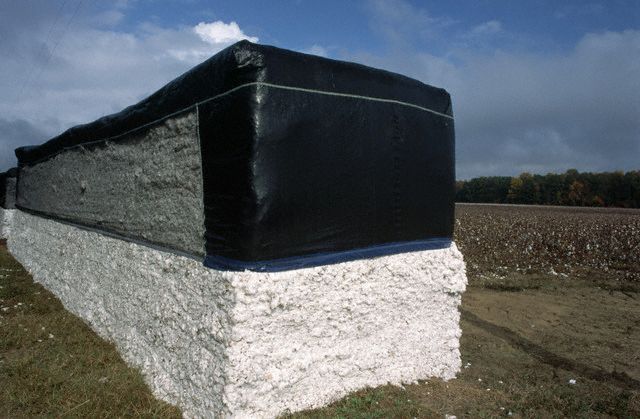 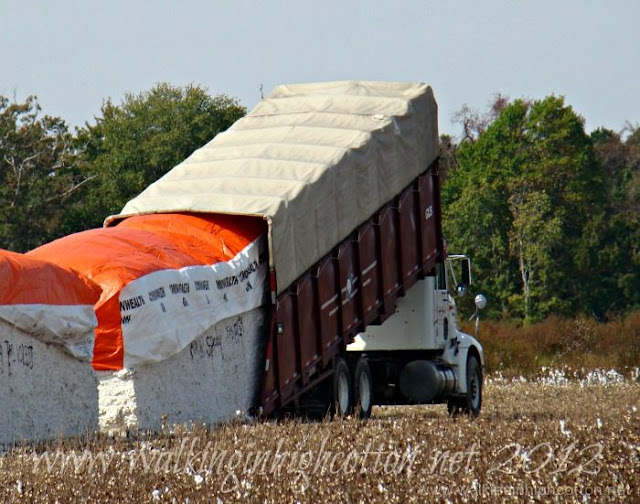 The bails are picked up one at a time by specialized tilt-bed trucks with big hard sided, canvas roofed protective covers and hauled to the co-op or processor.

All this activity leaves tufts of loose cotton blowing around, some caught along the edges of the roads, others forming deep drifts, looking like mutant snow, around the co-ops and processors.

I found it comforting to watch the choreographed dance of  combines, collectors and compresses out there in the fields, along with various fuel and repair trucks skirting around the edges. It somehow gave a sense of all being right with the world. 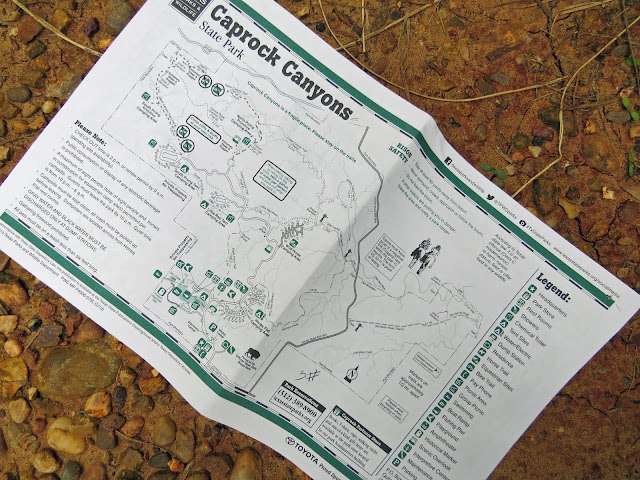 But anyway; 4 miles north of Quitaque is my destination, the Caprock Canyons State Park.

This is also on the edge of an escarpment so you don't find the canyons by climbing up through mountains, but rather by suddenly falling off the edge of the flatish land down into them. In the 40 miles between Estilline and Quitaque you've climbed over 700 feet but it was all gradual and pretty much unnoticed. The drop into the canyons of the park is nearly as far, but not nearly so gradual.

But that's for another day. 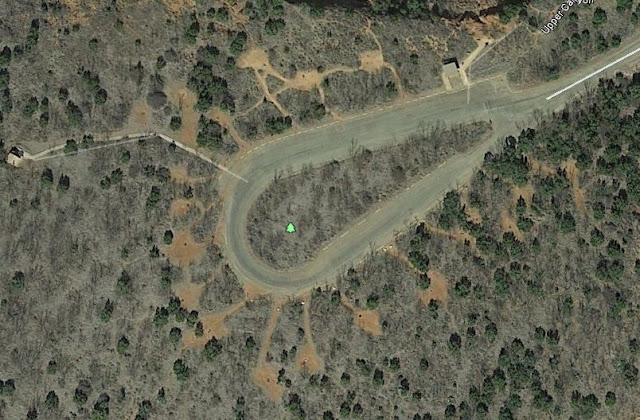 Prior research told me that the basic campsites in this park, the water only sites such as the South Prong tent area shown above, are actually all walk-in tent sites off of one of three different parking-lots.

Not wanting to 'camp' in the middle of a potentially busy and antiseptic parking lot for a week I chose to splurge for a water/electric site in the Honea or Honey Flats campground which is up on the escarpment. (One park map has it as Honea and another as Honey. I didn't get around to asking which is right.) 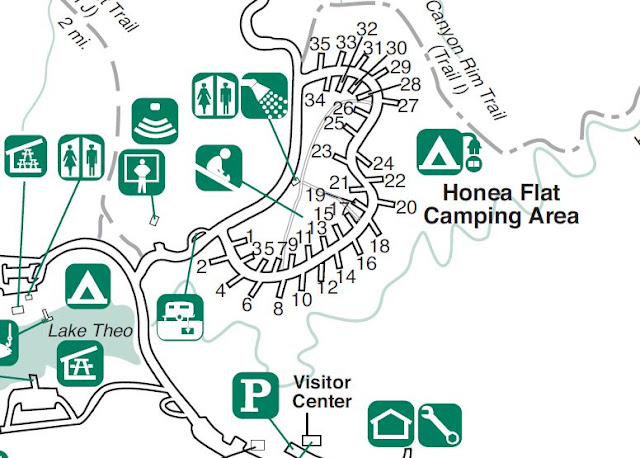 One end of this campground is set up for 50 amp service but I chose the other end with it's measly 30 amp service.

Not that there was any price difference, they are both $17 a night, but experience has shown that nesting my little van among the massive 50-amp rigs with their three separate, and constantly-running-regardless-of-the-weather, rooftop heat-pump air-conditioners, full-length powered awnings and the outside 56" flat-screen TV-as-bright-as-a-searchlight, supported by 180 watt four-channel + sub-woofer, multi-input sound system; euphemistically called the outside entertainment area; is not necessarily as comfortable as I would like.

After all, today's rich grandparents were yesterday's heavy metal rockers and they need those extra watts because their hearing isn't so good anymore. . . 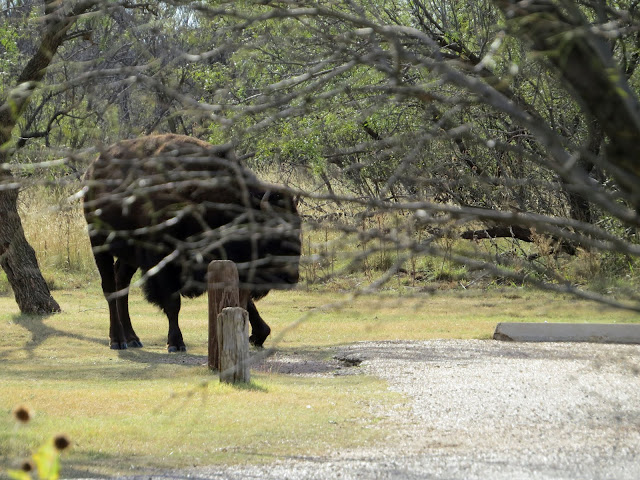 But when I got to my 30-amp site, site 5, there seemed to be some dispute over just who it had been assigned to! 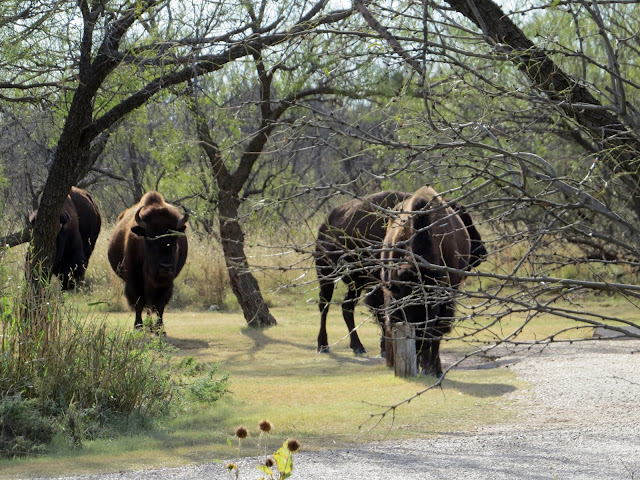 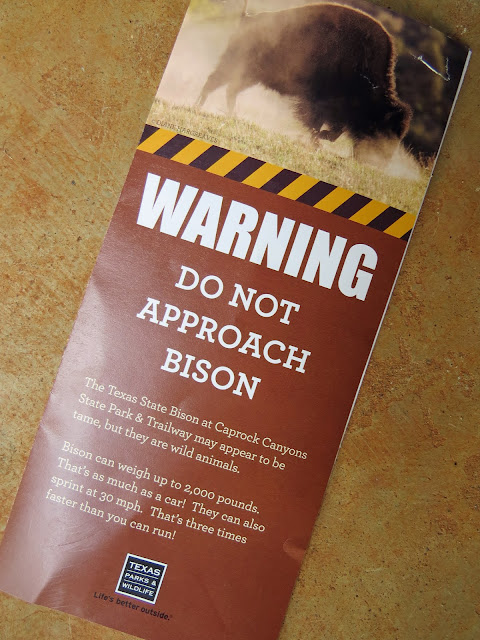 When you pick up your permit at the visitor center they staple this little Bison 101 brochure to it. 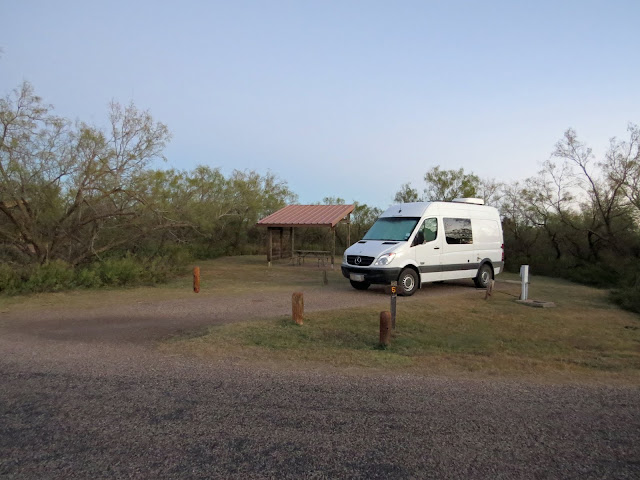 Eventually the dispute was resolved with no goring, squashing or stomping. The bison moved on and I was able to get myself settled in.

Except I only thought the bison had moved on. . . 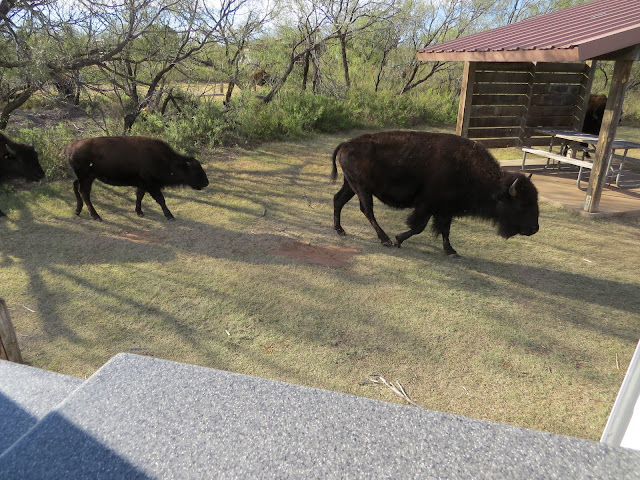 There I was, minding my own business, 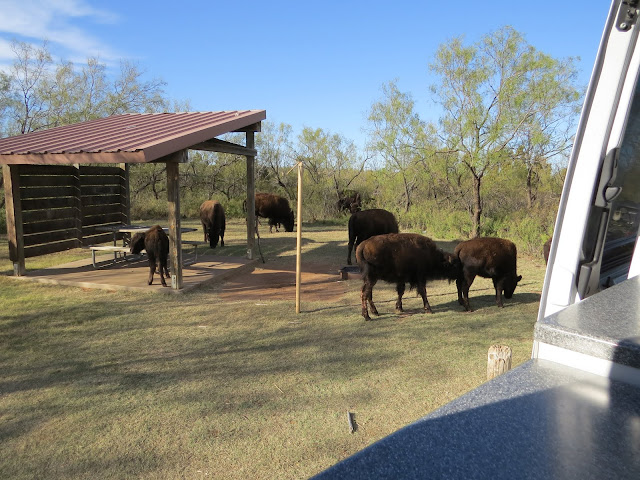 and the neighborhood went all to hell again. 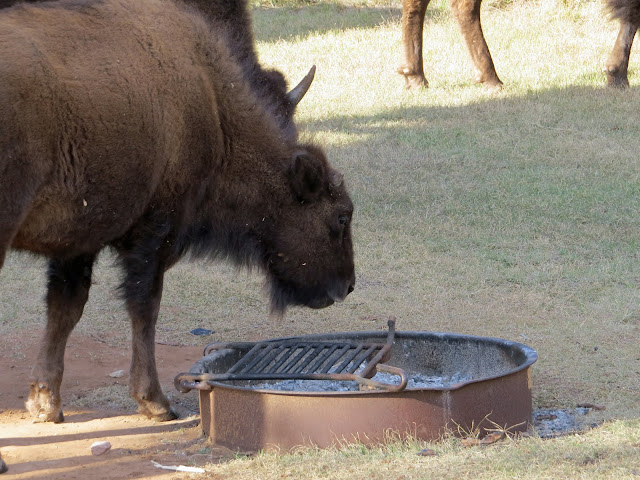 It's probably a good thing I wasn't grilling bison burgers at the time!