Is the Texas State Park Pass worth it?

All states are seem to be slightly different when it comes to fees for using state lands.

Illinois state parks have no day-use fee, whether you're resident or not, though the politicians have been threatening to put an end to that for several years now.

Michigan is more complicated.  They require a pass to get onto all state lands, which includes state parks, state forests, state recreation areas, state boat launches, state trails and even when visiting state hatcheries and many local/community recreation areas.

Residents and non-residents alike are welcome to pay-as-you-go at the rate of $9 for a day-pass. But you can only get these at certain places, usually the popular ones with a manned entrance booth.

Non-residents that are going to spend more than a few days on state lands can buy a calendar-year window sticker for $31. Like the 'P' on a resident's registration, this gives you unlimited access until the  sticker expires at the end of December. Unfortunately Michigan does not prorate this sticker so if you buy one in September you will pay full price yet it will still expire the end of December.

New Mexico charges $5 for a day pass, resident and non-resident alike, or you can buy a one year window sticker for $40. This covers the $5 per day per vehicle entry fee for all 35 of it's state parks.

But New Mexico also has an annual camping pass as well. A resident can buy one for $180 and it costs a non-resident $225. The camping pass covers daily-use fees plus the $10 nightly camping fee which is what a site with water nearby, no hookups and sometimes a table and fire-ring, costs, and is good for as many nights as you can cram into the 12 months the pass is good for. If you want an electric site the pass covers the first $10 and you pay an additional $4 a night. Add sewer hookup and you pay an additional $8 a night.

Michigan and New Mexico charge their daily-use fee by the vehicle. Texas daily-use fees are charged by the person (and unlike New Mexico, must still be paid even if you are also paying for a campsite.) and, depending on the infrastructure and popularity of the park, the daily-use fee can be anywhere from free to $6 per head. 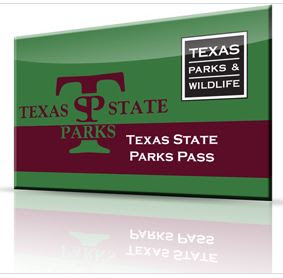 But residents and non-residents alike can also buy a $70 Texas State Parks Pass, good for 12 months from the date of purchase, which covers the daily-use fee for everybody in the vehicle (I assume clown-cars are included!) or up to 5 additional guests when entering on foot or by bicycle.

In addition to the 'free' day-use, each pass comes with 4 coupons worth half off the second night of camping at any given park. Now the majority of the state's water only campsites are in the $8 to $10 range (Though popular places like Inks Lake charge $16 and some places like Lost Maples State Nature Area have no water-only sites at all.) so you probably wouldn't want to waste a coupon on that, but water/electric sites are in the $17 to $23 range (Again, depending on the popularity of the park.) so half-off a night's camping at one of these sites can start to add up.

So back to the original question: Is it worth it?

Well you'll have to figure that out for yourself based on anticipated usage. Just remember that Texas has 54 State Parks which is well over twice the number of all the other public lands (Mostly Federal.) in the state combined.

I travel alone so my pass only has to cover the entry fee for one person per day, but if I was like most travelers and had a companion with me the savings would be nearly double that.