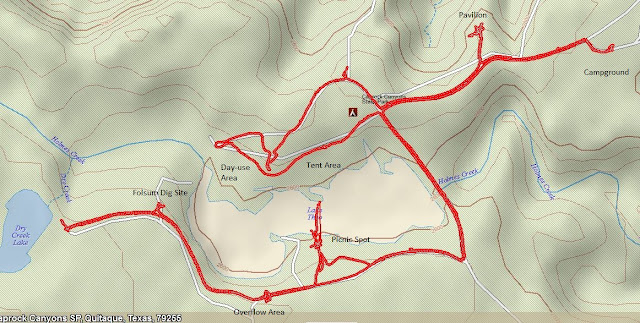 I got my old-enough-for-a-geezer-card, gone-to-pot body (Can't I please just pay someone to work out for me??) out of bed this morning feeling better than I had a right to after two hard back-to-back days of hiking and biking.

I managed to transition from supine to upright in remarkably quick fashion with a minimum of moaning and wailing, but, in a rare moment of common sense, I chose not to push it and spent the day just sort of leisurely  wandering the relatively flat southern end of Caprock Canyons State Park on the Quad-B. (OK OK, yes, I'm aware that there are lots of other 'L' words that might be more appropriate here such as Lazily, Lackadaisically, Listlessly, Languidly, or Lethargically, but none of those put me in quite the same good light as Leisurely!)

This kept me up on the escarpment and avoided any significant elevation changes. I'm sure, being the macho he-man that I am (OK, you can stop laughing now.) I could have handled some verticality, even the upward verticality parts, but I was saving myself for the hike I had planned for tomorrow. 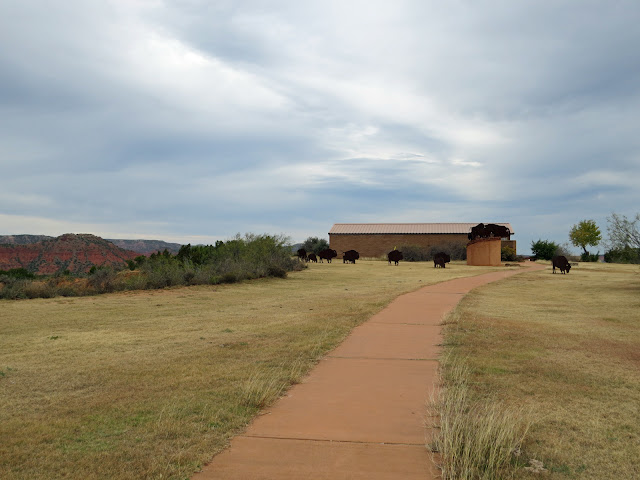 Shortly after rolling out of my campsite on two wheels, incidentally with no personal protection beyond a lightweight foam shell on my noggin, I wheeled cluelessly up to the pavilion and got a quick shot of adrenaline which I'm almost positively pretty sure I could have done without!

Fortunately, before I could wrestle the Quad-B around and pedal away in panic, I figured out that none of these bison were moving; I mean not at all; which didn't seem like the normal state of bison-hood. 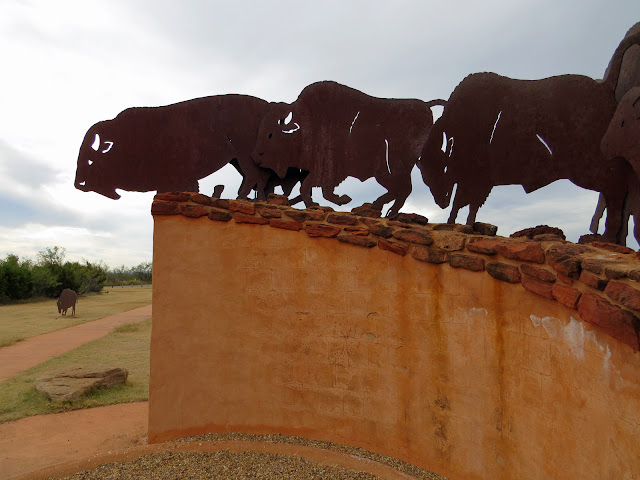 Turns out this marauding herd is made up of life-size silhouettes cut from relatively harmless steel. (I still kept my distance. Certainly didn't want one of those things falling over on me!!) 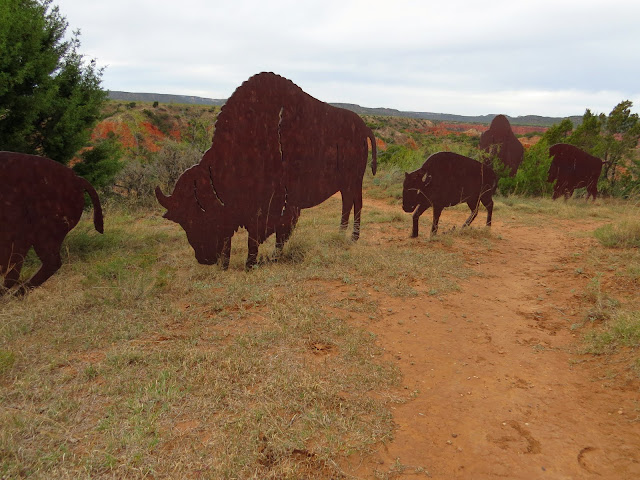 But I have to wonder what the real bison think when they come across their frozen brethren. 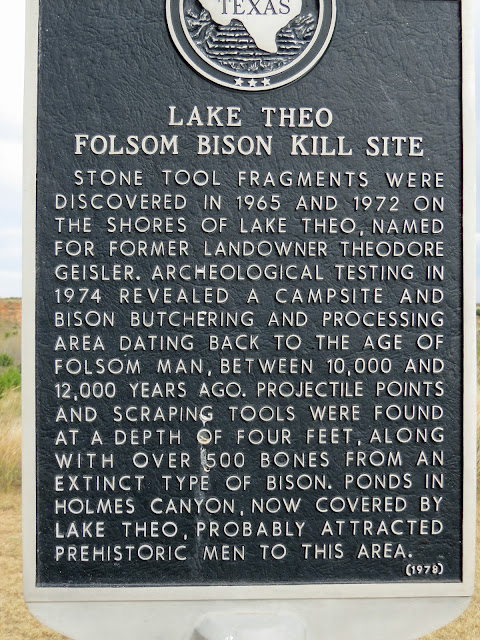 At the far end of my wanders today I came across this historical marker.

The roadsides of Texas are full of markers like this ( More than 16,000 of them! and every one  cast by a single company out of San Antonio.) and there's actually a book available with the location and text of each one so the co-pilot can read them off without having to actually stop. (I have this book but the closest thing to a co-pilot I have is Dad's last set of work gloves up there on the dash, and he always seems too busy watching the scenery to read it to me. . .) 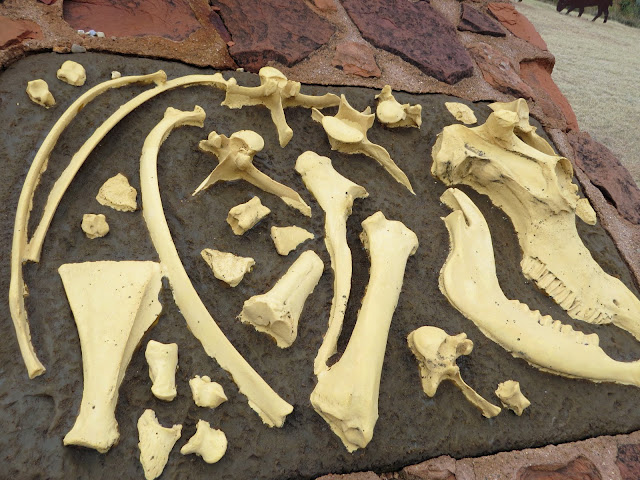 Back at the pavilion are some replicas of what the archaeologists found at the Folsom site a few miles away. 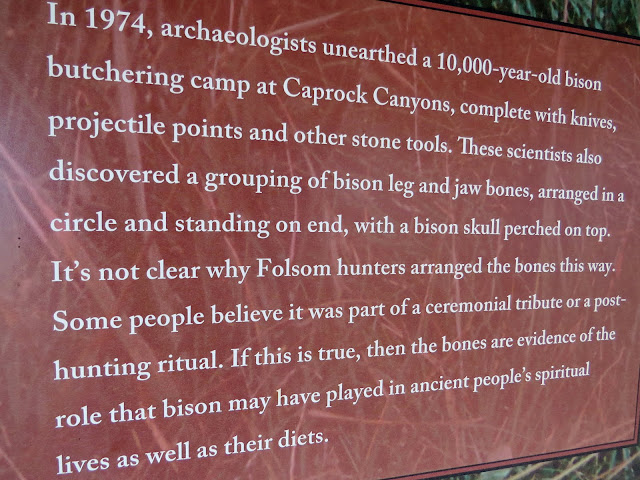 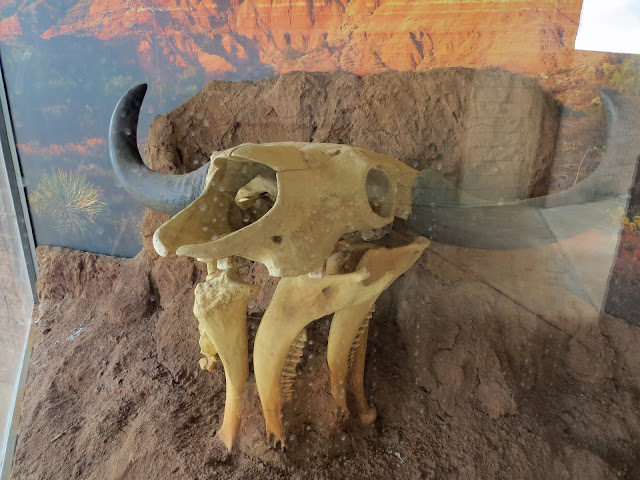 Including this recreation of a bison skull 'alter' they found. 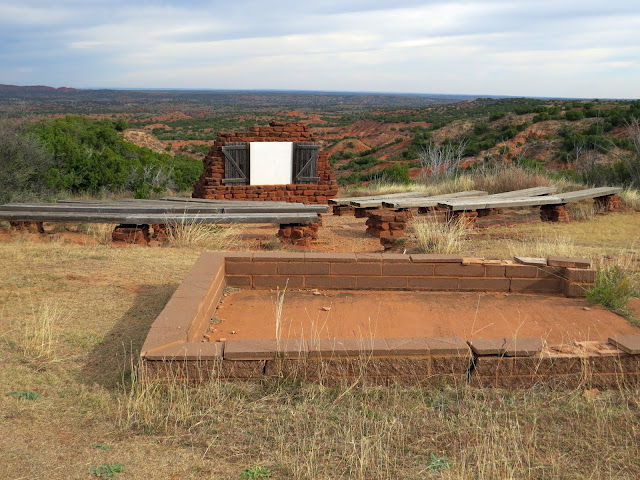 Behind the pavilion, looking out across the canyons, is an amphitheater complete with projection screen. 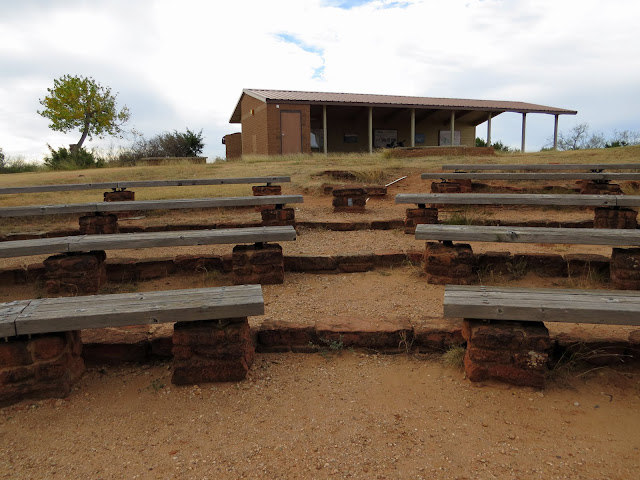 But there were no Ranger programs scheduled for the nights I was there. Off-season and all. 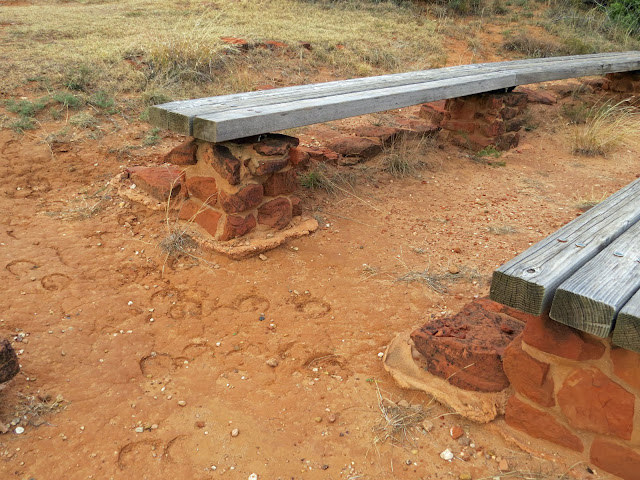 And yep, those are bison tracks!  I wonder if they get preferential seating during programs. . . 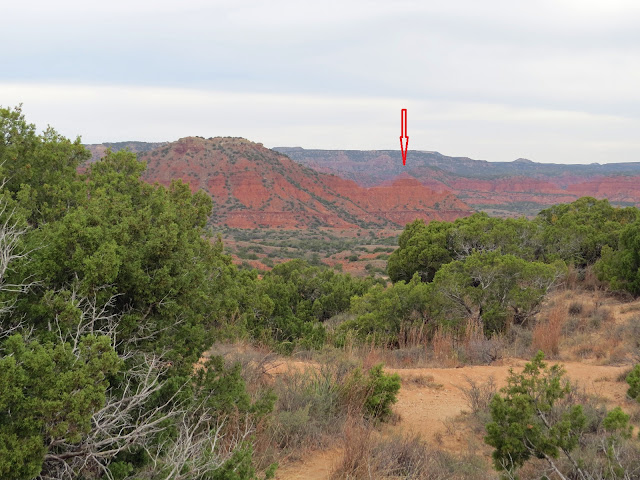 This is the view from just behind the amphitheater screen.

That smaller peak out there is Eagle Point and there's a trail that starts just to the left of the photo up here on the escarpment, drops down through the valley in front of you and makes a slight hook around Eagle Point before intersecting the park road down there. It's a 4 mile out-and-back hike and since the elevation drop is only a few hundred feet it's classified as a moderate trail. (But it doesn't feel 'moderate' when you're climbing back up to the escarpment at the end of  the round-trip!) 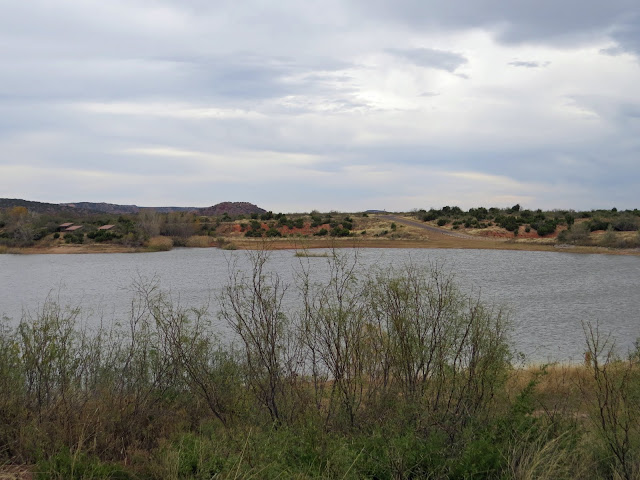 Just southwest of the pavilion, what used to be some small natural pools in the bottom of Holmes Canyon have been turned into Theo Lake by a low dam there on the far upper right of the photo.

It's a small lake but up here on the southern plains, a lake is a lake!

If you look close at the far shore over on the left you can see some shelter roofs. 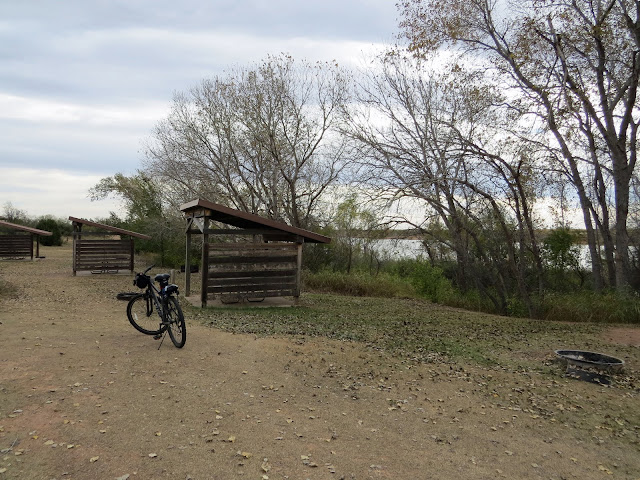 That is a walk-in tent-camping area but I wasn't impressed with the small size and close spacing of the sites.

This spot must be a bit chaotic on popular weekends. Good for family reunions maybe but I imagine you can hear the people in the next tent fart and unless you know the occupants well enough to at least sit around the Thanksgiving table with them every year that could be annoying!

The tent sites down in the canyons at the Little Red or South Prong areas are a little more spaced out and isolated from each other, but as I pointed out in an earlier post, all 'tent' sites in this park are walk-in and the closest you can get a vehicle to them is the antiseptic and exposed parking lots. 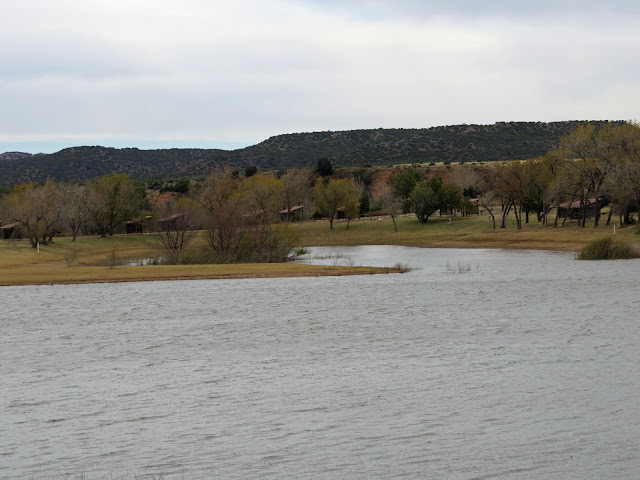 But there is a rather nice looking day-use area on that side of the lake as well. (If you look for a moment you'll begin to see all the shelters tucked into the trees over there.)

They're out of sight in this photo but there's a big playground there as well as flush toilets and a fishing pier.

There's also a boat-launch on the near side of the lake (No motors allowed) and since the lake is entirely within the State Park, no fishing license is required. 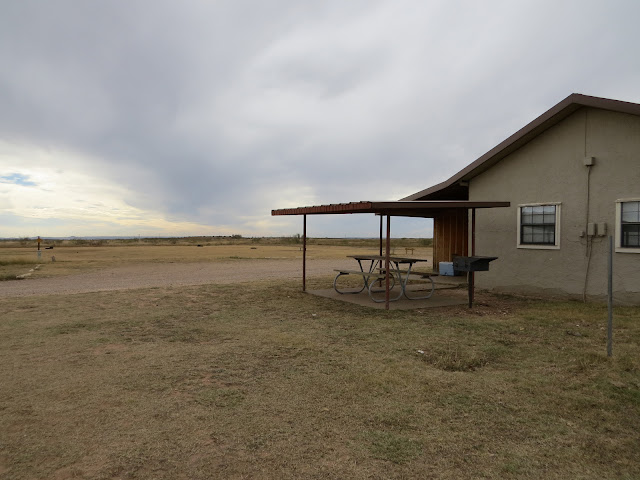 Along the southwest corner of Theo Lake, (But set back a little from the lake,) there's an overflow area for no-hookup camping but it seems very exposed up there, being just an open field on the plains and right in front of what looks like a residence that I'm sure is occupied during the busy seasons, so I'm not sure it would be very comfortable. 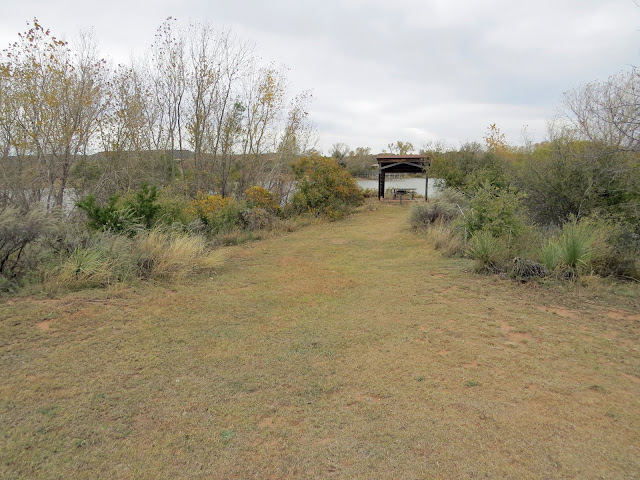 As you can see from the photos the park was virtually empty today so I had no trouble snagging this prime, secluded lunch-spot-with-a-view where I spent much of the afternoon hanging out 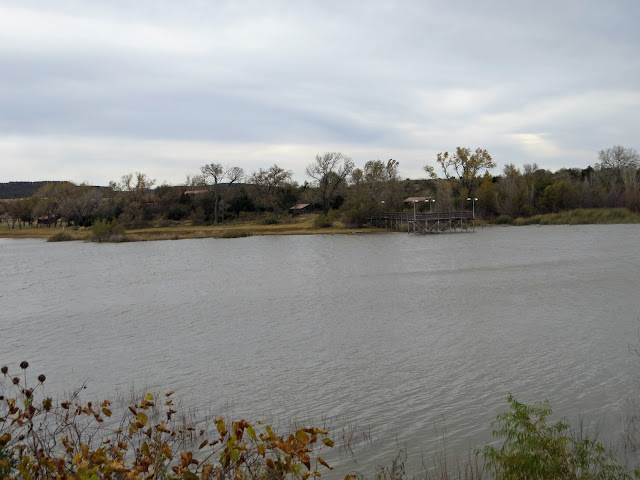 on a bluff 20 feet above the lake, kicked back and alternating between reading and just looking.

And no, I didn't swim across to the fishing pier like my track there at the beginning of this post indicates. The GPS just got a bit jumpy while hanging out under the steel roof of the shelter for a few hours.. . .

During the day the strong southerly winds of yesterday gradually moved around to the west on their way to becoming northerly, and with full cloud-cover to keep the sun from warming things up much, as late afternoon/early evening crept up it was getting just a little too cool for leisurely hanging around so I remounted the Quad-B and made my way lackadaisically back to camp. All rested up and ready for tomorrow's challenge.