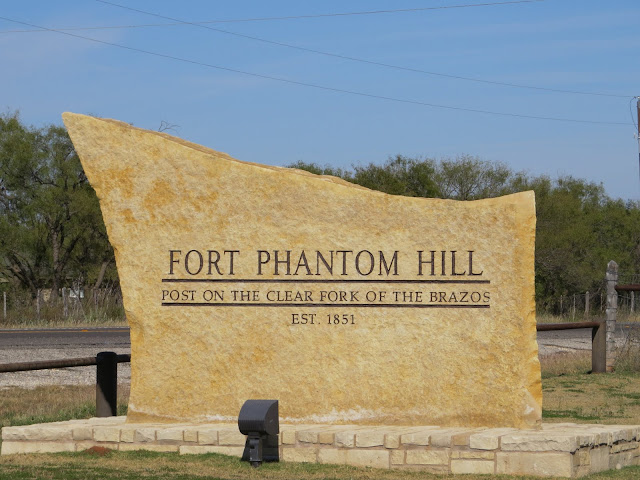 A few miles north of Abilene Texas FM-600 tracks along a low ridge between the Clear Fork of the Brazos River and Elm Creek.

When headed upstream along the Clear Fork the gentle climb up to this ridge has an imperceptible curve to it and apparently, back in the days of open range, long views, and no man made landmarks, that curve had the effect of making the ridge seem to keep moving further and further away as you approached and eventually, when you did 'arrive' at the relatively flat top, it didn't seem like there was ever a ridge there at all, hence the name. 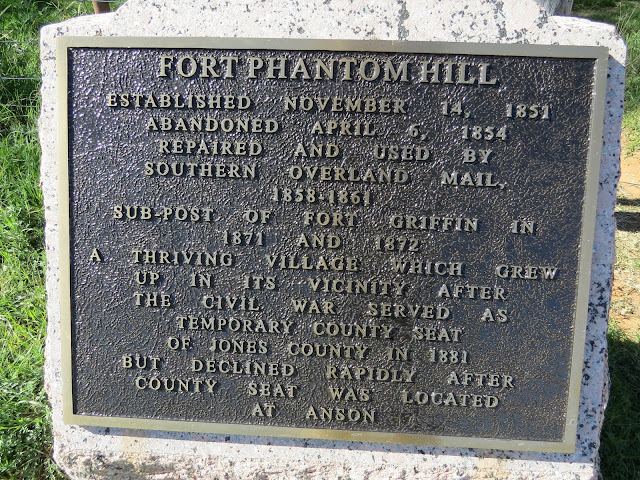 During the mid-1800's Texas hosted several, roughly north-south lines of 'Frontier' Forts designed to protect the growing pioneer population from the sometimes unhappy natives. (Never mind that the pioneers were the invading force of the day!) As the pioneers moved further and further west the line of forts kept shifting, so most of them didn't last all that long. 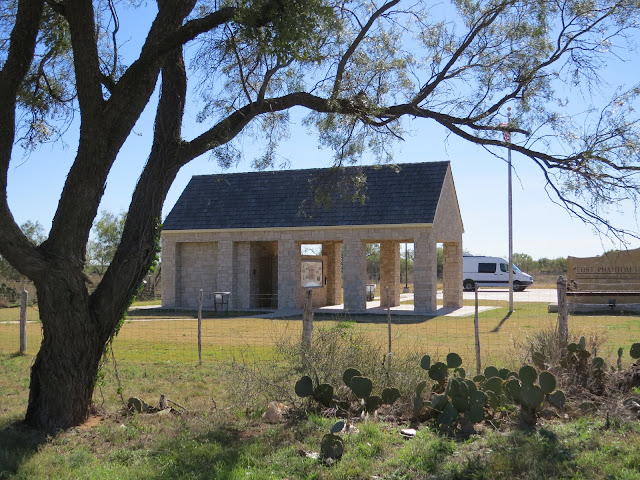 Today the remains of Fort Phantom Hill have been preserved and I spent a solitary, and windy, afternoon there one day.

It hasn't always been this quiet at the fort. during the late 1990's/early 2000's the fort was host to an annual rendezvous that had history buffs, reenactors and other like minded people swarming the grounds of the old fort, and an episode of the Travel Channel's short lived Dig Wars was filmed here about 2012, but there was no one around today.

The visitor center, sitting there alongside the 8 slot parking lot is unmanned and basic. Pretty much just an open-air pavilion with a couple bathrooms tucked in the back. 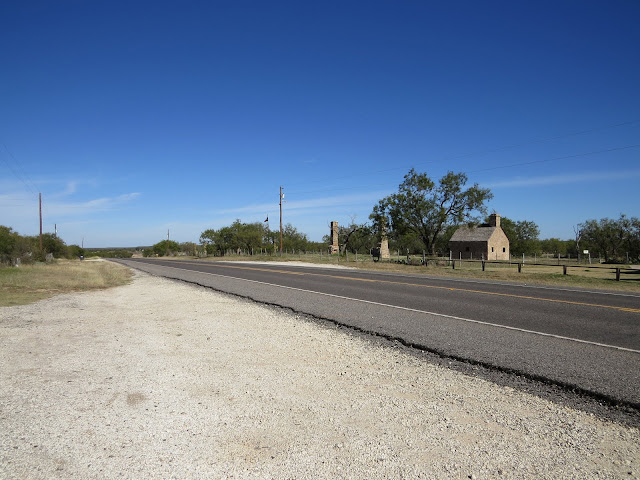 Large motorhomes, small motorhomes with toads and vehicles with trailers should not try entering the small lot but rather stay out along the shoulder instead. A short stretch of shoulder on either side of FM-600 in front of the fort is extra wide and there was very little traffic on the road the day I was there. 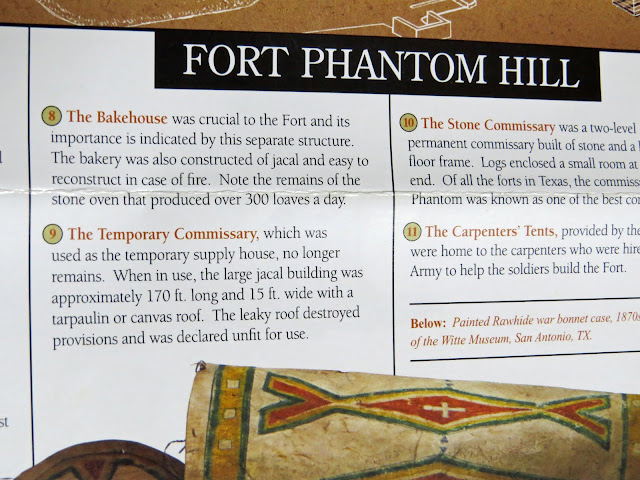 But, tucked in under that pavilion, along with the usual information plaques, you will find a dispenser with large (So large it was a challenge keeping it under control in the wind.) brochures with more information and a self-guided tour of the fort.

Note, the guided tour often mentions building as being 'constructed of jacal', but don't go looking in your handy taxonomy reference for the stuff because jacal is a building method not a tree, plant or other material. Jacal is thin branches (Much easier to find in many places than thick logs) driven into the ground vertically side by side, stabilized with even thinner material woven through horizontally, sometimes plastered with a mud/grass mix to make it even more weather tight, and roofed with thatch over more thin branches bent over and fastened along the ridge line. 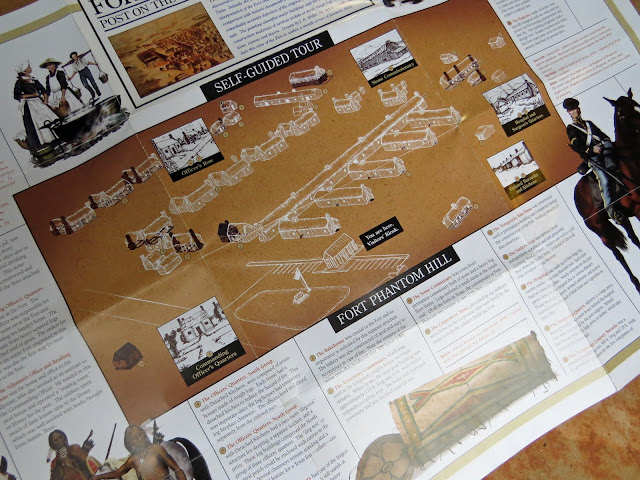 The fort had no stockade walls and was big, much of it built using the previously mentioned jacal method, which, as you can imagine, doesn't last as long as some other building methods.

The missing parts of the fort are shown on the map in white outline, (Because it can't support a wide roof, larger jacal buildings tended to be very narrow for their length, like the original barracks building which was over 300 feet long but only 18 feet wide.) but there are enough stone foundations and chimneys still standing, shown on the map in solid colors, to keep yourself oriented. 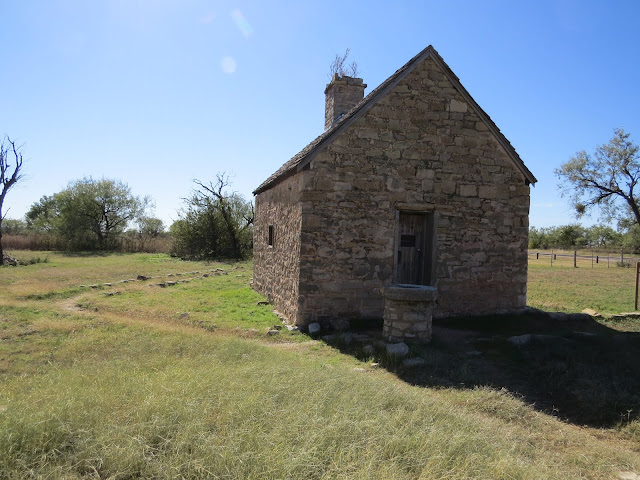 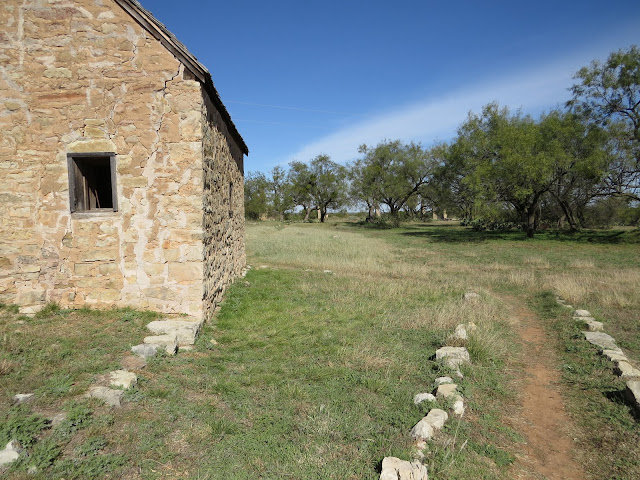 One end of the headquarters building, which included the commander's office and a small cell for those soldiers that just can't play well with others, was all stone and still stands today though the jacal part of the building which used to be there on the left of the photo above, is naturally missing. 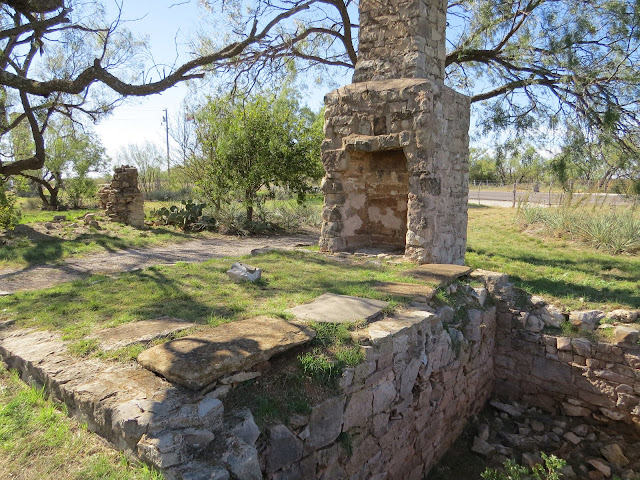 Unlike many of the building, including both versions of the aforementioned main barracks for the 5 companies stationed there, the commander's quarters was of log construction over a strong stone foundation and even a cellar, the stone parts of which still survive today. 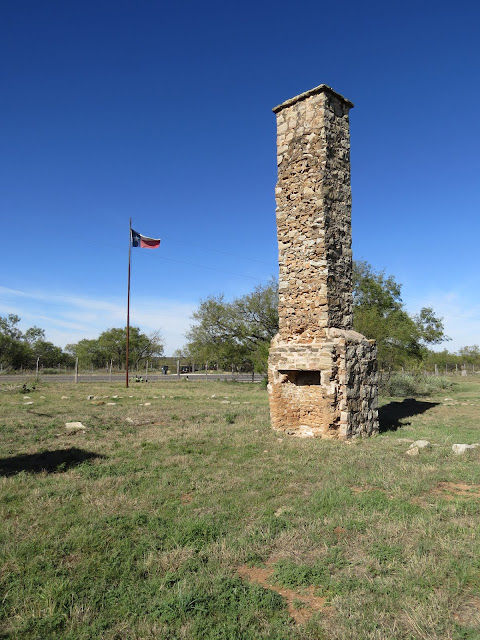 Lesser officers got the stone foundation and chimney (as opposed to the more common but shorter lived log and mud chimney.) but not the cellar. 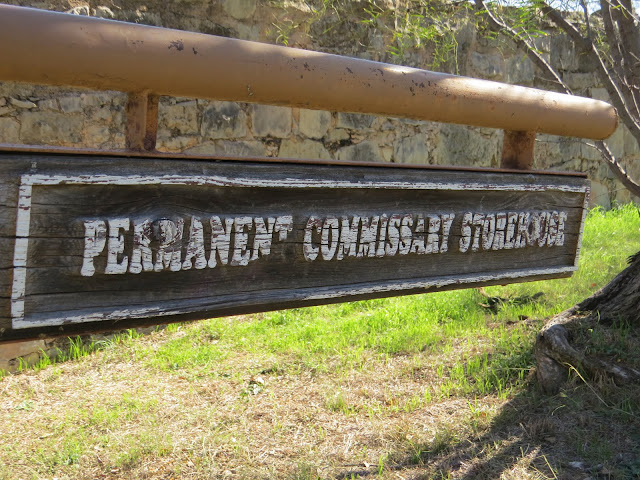 One place where they didn't skimp on heavy construction was the commissary/storeroom. 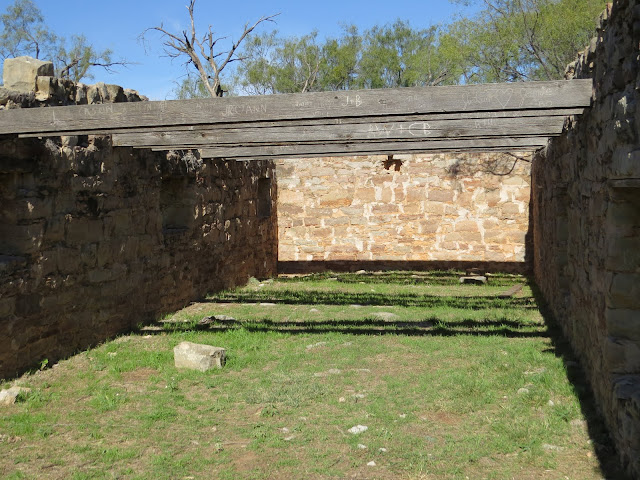 This two story building of stone and heavy logs was considered one of the best-built commissaries of all the Texas forts. 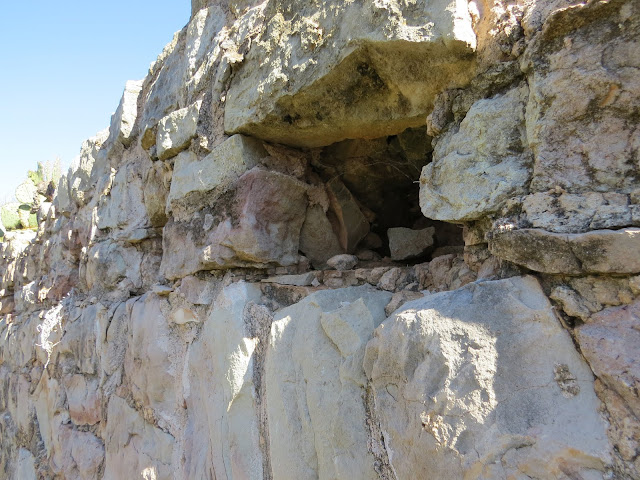 It could be that it was so well built because the roof of first version, now called the temporary commissary on the tour,  leaked badly and ended up destroying hard-to-come-by provisions. 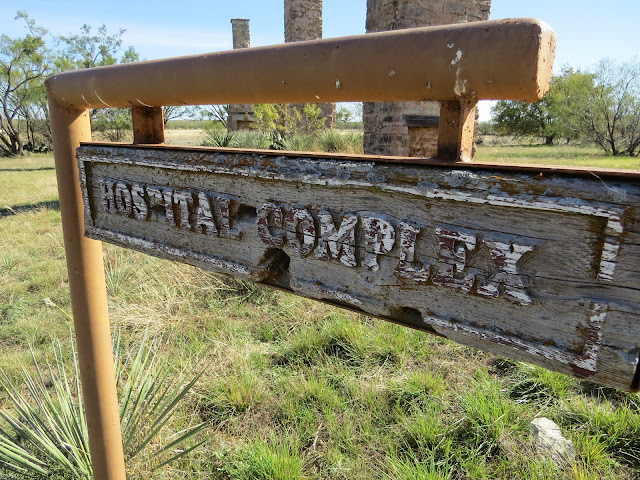 Life at a Texas fort wasn't at all like a John Wayne movie, full of drama, exciting patrols and frequent battles. 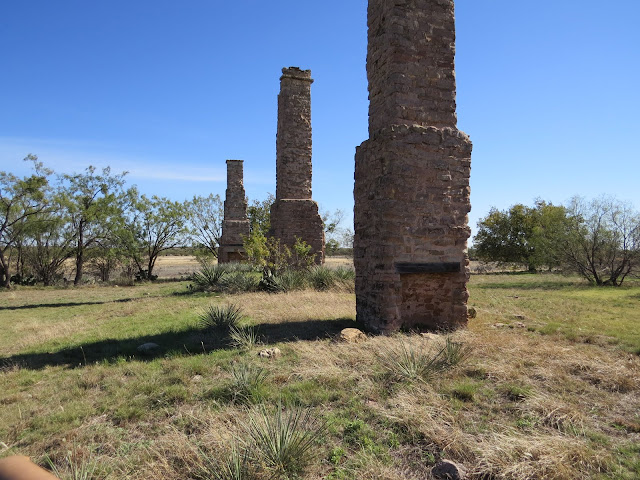 The reality was far more likely to be long, boring days of hard work, (The soldier of the day carried an ax or shovel far more often than a riffle.) bad food, close quarters and struggling with less than hospitable weather with limited resources and supplies. 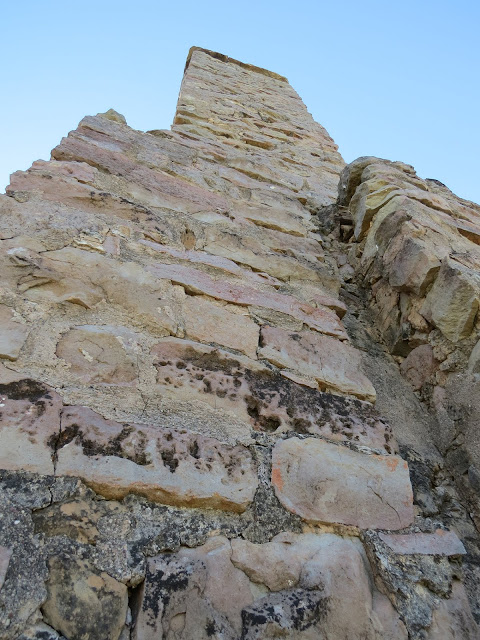 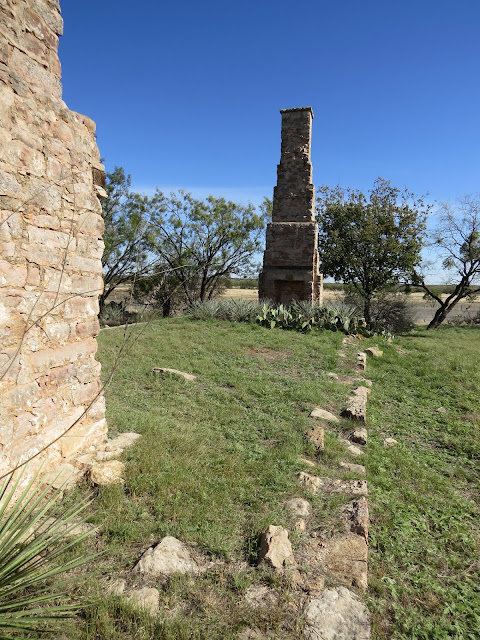 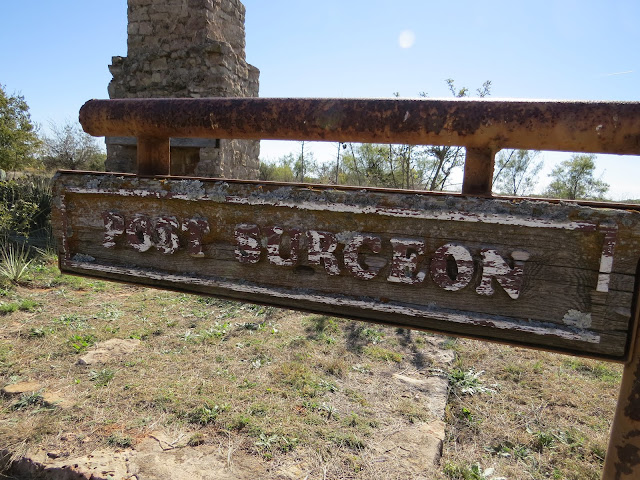 and kept the post surgeon, who lived in quarters close by, busy. 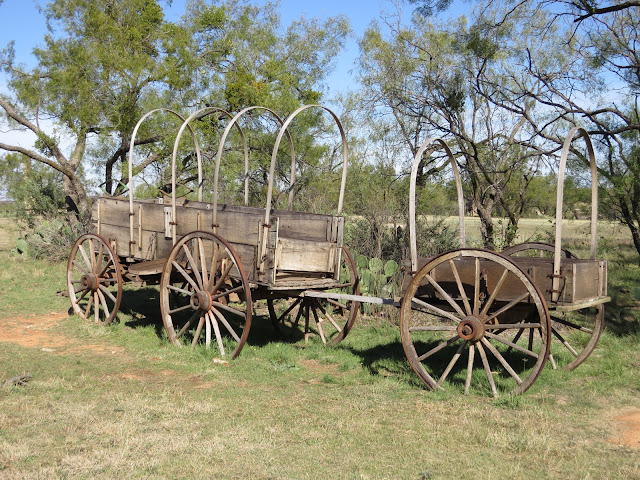 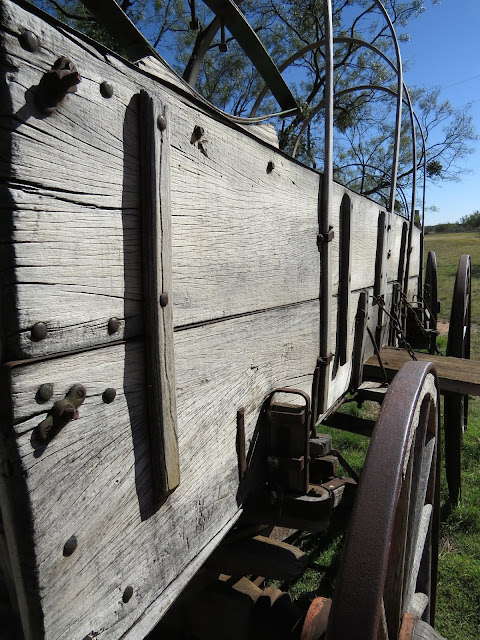 Present day Fort Phantom Hill is not a flashy place full of the colorful displays and interactive exhibits that would keep the electronics-age kids engaged, (For more on a place like that stick around!) 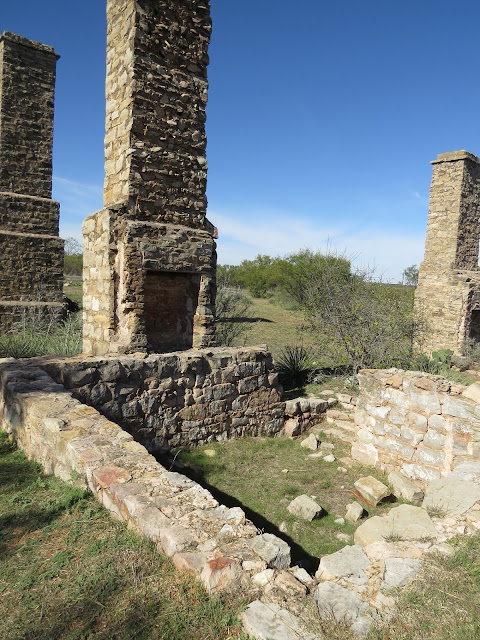 but I didn't mind. That, along with it's location somewhat off the beaten path is probably why I had the place to myself all afternoon and could sit quietly and absorb the history and feel of the place.

Which I took full advantage of.

Pondering the sort of drivers; tradition, poverty, racial oppression, new beginning, need for adventure; that might motivate a man to join the army with it's low pay, iffy living and working conditions, and few benefits.

Imagining the realities of living far from home, usually far from population centers. Living a life back-dropped by the incessant sound of axes producing the stacks of building material and precious firewood needed every day, the shouts of tired men dealing with unruly horses down by the stables and in the half-light of the leaky, drafty, dirty, stinking, overcrowded barracks the painful groans of men with losing hands almost lost among the whoops of those raking in their winnings, the games sometimes interrupted by the piercing but welcome squeal of worn wooden wheel hub on dry axle as a long-awaited supply wagon trudges, oxen paced, into the fort. 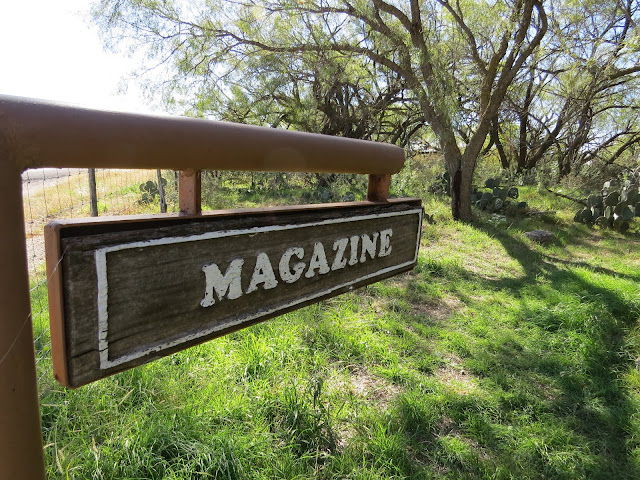 Ahem. Anyway. . . if you do stop by this lonely little place out there north of Abilene 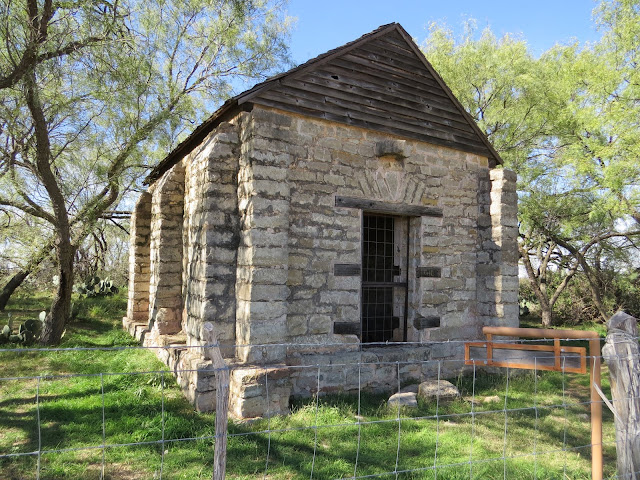 don't forget to cross the road, which was, at best, nothing but a faint track when the fort was active, 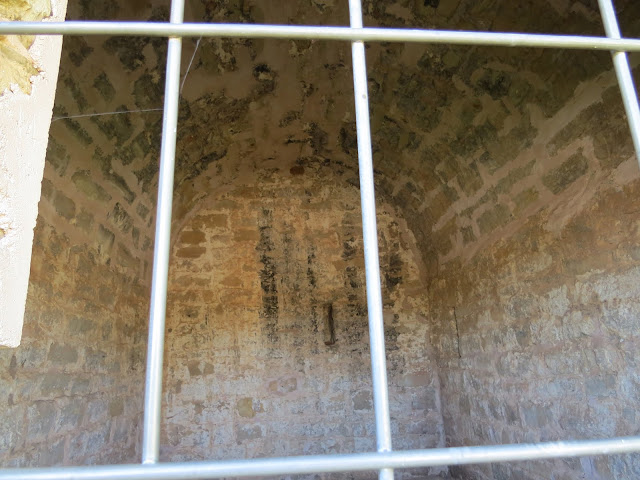 and check out the heavily, and beautifully, built armory where stuff-that-can-go-bang was stored well away from the populated part of the fort. 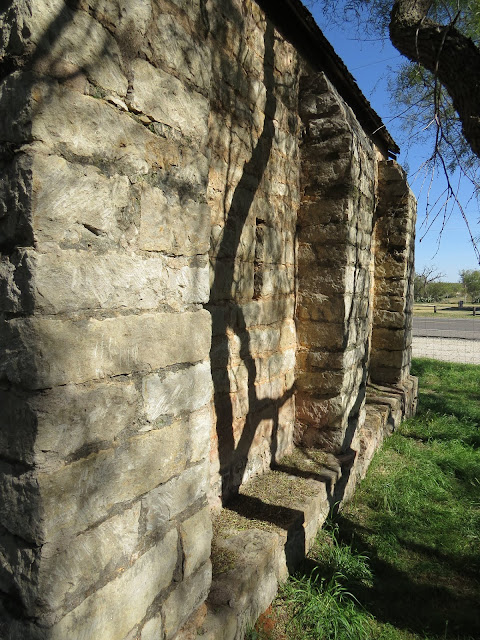