There was more than enough at Caprock Canyons State Park to keep me occupied and happy for another week, but though I managed to snag a Friday night site, come Saturday I was kicked out of the campground due to no room at the inn. (Whether you think it's a good thing or not or not, all Texas State Park campsites other than overflow are reservable with none held back for the plan-deficient wanderer.)

Fortunately, about 120 miles to the east-south-east is Copper Breaks State Park and, even though it's actually closer to the Dalas/Ft. Worth moshpit of overcrowded humanity than Caprock Canyons, it is far less utilized and there was plenty of weekend space there.

The drive between the two parks took me down a mix of county, state and US roads through several tiny south-plains towns and I happen to like these kinds of hard-working little towns. They're not especially pretty towns, focused more on function than showy architecture, on the business of farming and ranching rather than tourism, but the honesty of towns like this appeals to me. 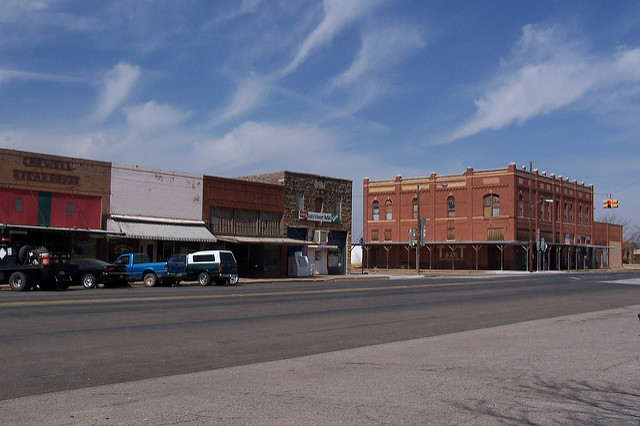 Each one has a co-op of course, one gas station, sometimes complete with a convenience store, sometime just some unattended card-only pumps out in front of the local fuel distributor, a bank, several churches, a grocery store in a building about the size of a Dollar General, and either an ice-cream parlor or a pizza place. (Rarely both for some reason. . .) 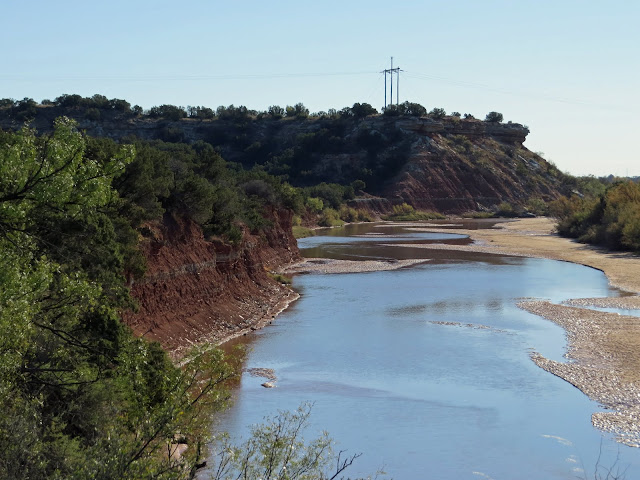 Copper Breaks, at 1800 acres only a little over one tenth the size of Caprock Canyons but still large enough to support a decent trail system, is bordered on the south by the Pease River and comes by it's name honestly 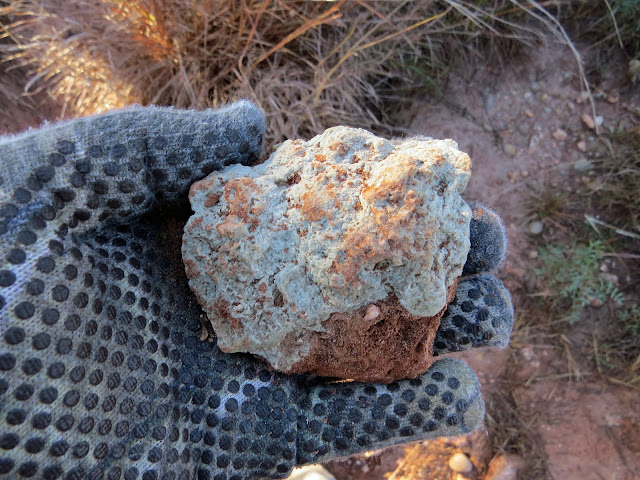 because of the veins of soft greenish-grey rock which can be processed to produce copper. (You can see one of the veins running through the bank above the river in the first photo.)  Several half-assed attempts were made to surface-mine the low-grade ore 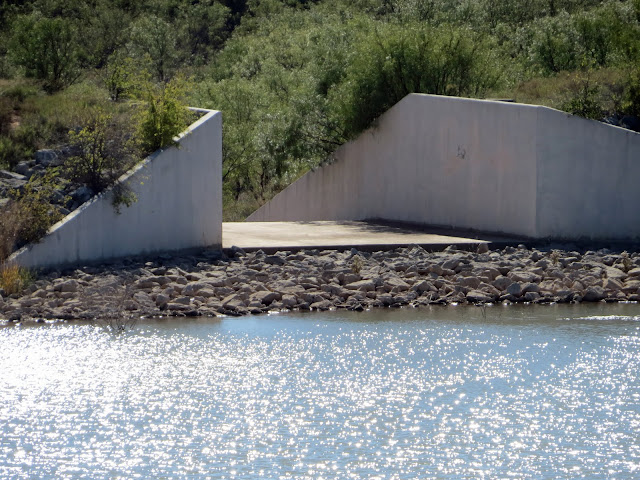 which left behind a couple of dams that were an unsuccessful attempt to supply the huge amount of water necessary for processing this kind of ore, and a few 'quarry' sites torn into the sides of the canyons.

When the speculators and miners gave up and left 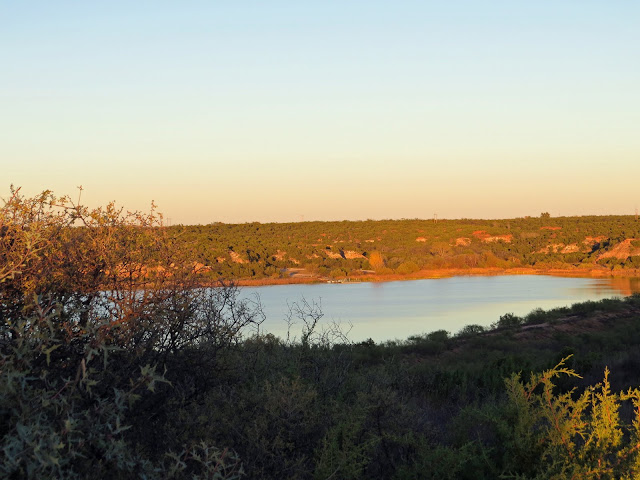 one of those dams survived 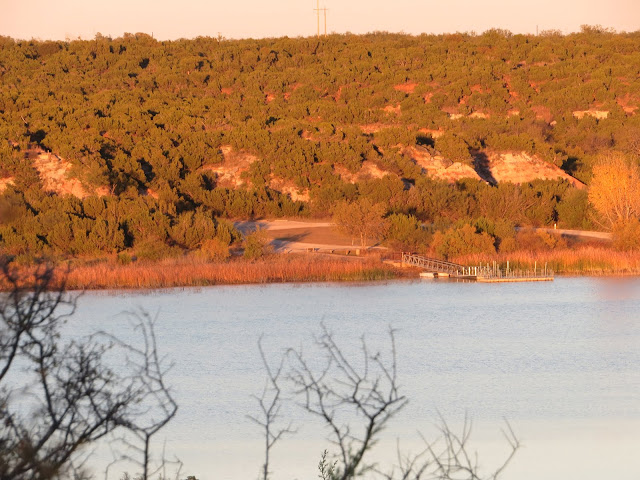 and is still holding water 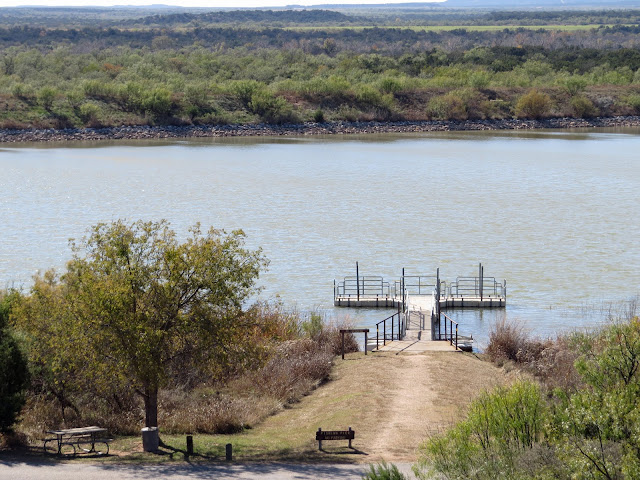 forming Copper Breaks Lake which became the centerpiece, first of a private property, then later the State Park. 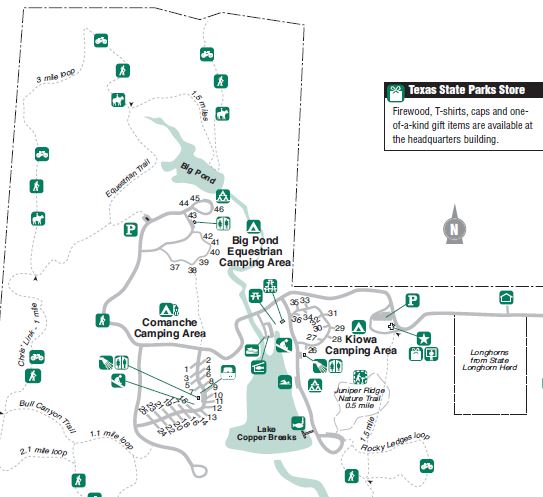 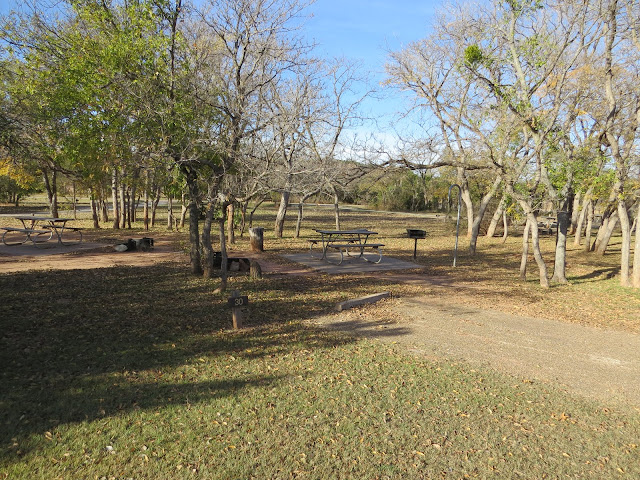 Kiowa is a water-only campground at the bottom of the hill and right up against the entrance road where vehicles are whining downhill in low gear. It's also adjacent to the day-use area which I imagin can get a little hectic at times. It's a small loop with little privacy between campsites. Sites 27 and 31 are the only ones with halfway decent solar exposure but this campground was a little to fish-bowl'y for me. On the plus side, the bathrooms include showers. 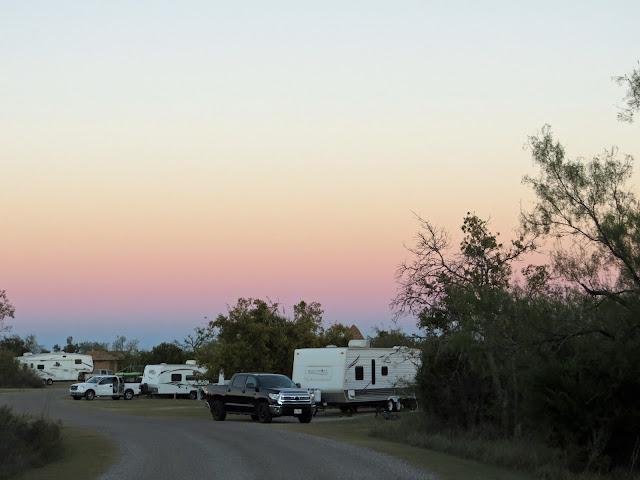 Comanche is a water-electric campground up on a bluff above the lake. It's fairly typical for State Parks with decent sized sites and hint of privacy, or at least breathing room. 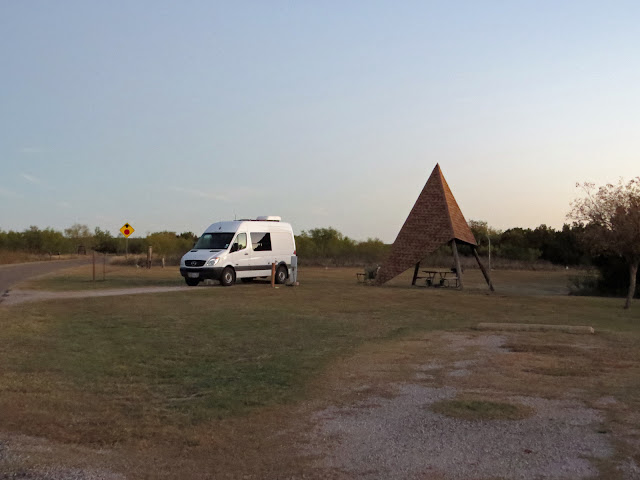 Unless you have kids and like being on top of the bath-house (Showers included) and playground it's probably best to stay away from sites 7 through 20. I found site 2, on one end and as far from either of those noisy, high-traffic zones as I could get, to be quite comfortable. This photo was taken near dawn on a Sunday morning and in the bottom right you can see one of the many empty sites still available in this campground. 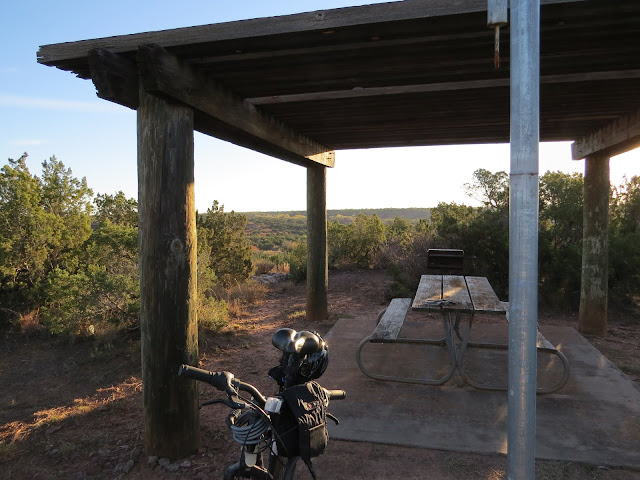 Toward the north end of the park, overlooking the canyon that feeds into Copper Breaks Lake, is a camping they call the equestrian area. These are also water only and some of them are really nice sites! The down side is that the bathrooms do not include showers, if that's important to you that is.

Later I checked with park headquarters and turns out I don't actually need a horse to snag one of these sites. I double checked just to make sure I was hearing the ranger properly and confirmed that I don't even need a stuffed horse on the dashboard to stay in one of these sites, which is where I'll be the next time I come back.

Sites 38, 40 and 43 are good sites with nice views, levelish parking, decent privacy and great solar exposure. The parking area for 39 is right up against the road, though there was no traffic, or people when I was there so that might not be a big deal, but sites 37, 41 and 42 are better suited to tents rather than vans, trailers, or motorhomes. 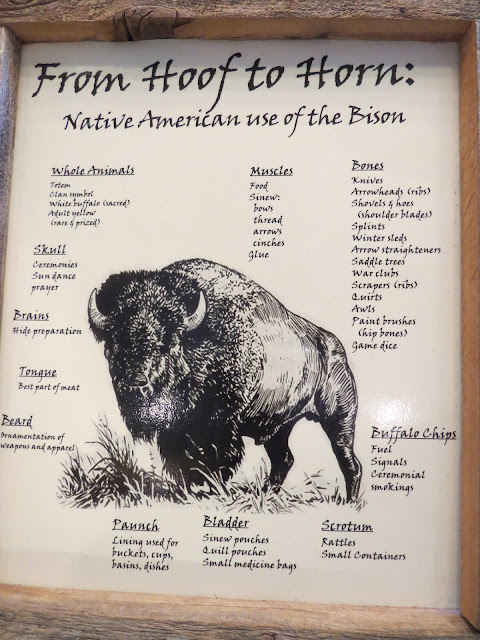 For a park this size the visitor center has a surprisingly large museum/interpretive center that will keep you occupied for a good hour without kids to drag around. (10 minutes with kids. . .) 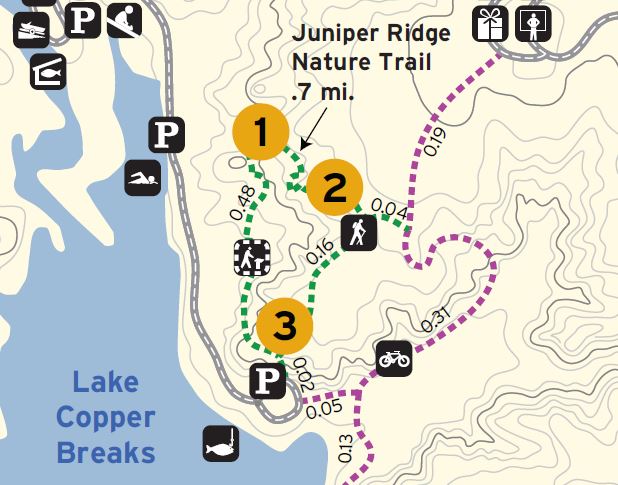 If you are going to try out the somewhat rugged nature trail, about a one mile out-and-back hike from the visitor center, be sure and pick up a guide first as the points of interest 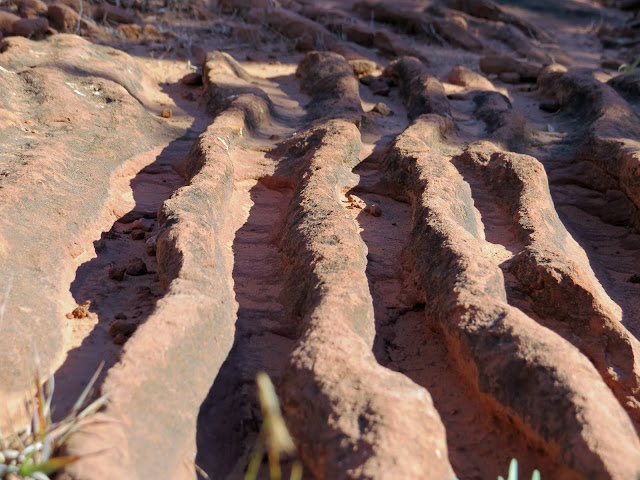 including these petrified Permian Sea tide ripples from millions of years ago, are marked only with numbered posts, not information plaques.

Coming up next: Hiking Copper Breaks and The Accidental Geocache'er. 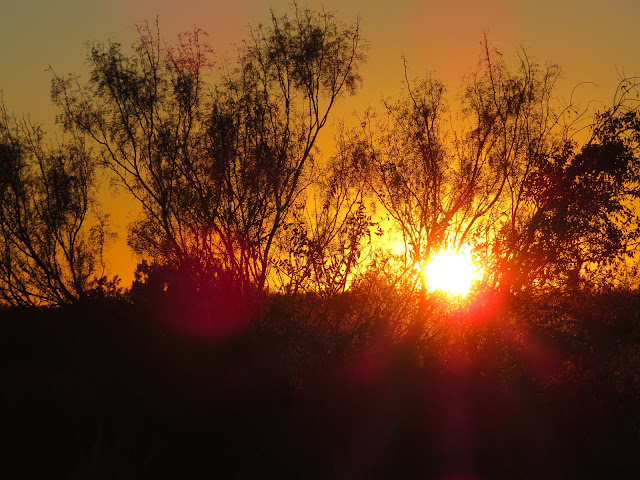