Oops, Not Quite Done Screwing With The Van Yet!


I had just spent most of a month standing at my workbench pretty much every day working on the remodel of The Van. After that you, as a sane and normal person, would think I'd be ready for a break; want to kick back; to come up for a little air; but apparently me, as a less than fully sane and not quite normal person, wasn't done yet!

Admittedly this hardly rates as a project since, other than the time for a slight diversion to pick up the supplies during one of our normal trips to town, (Actually not supplies but only supply, since this micro-project only required one thing.) it took me less than an hour, not much but less nonetheless, to tick off the 'done' box on this one.

But the change was noteworthy, at least to me, 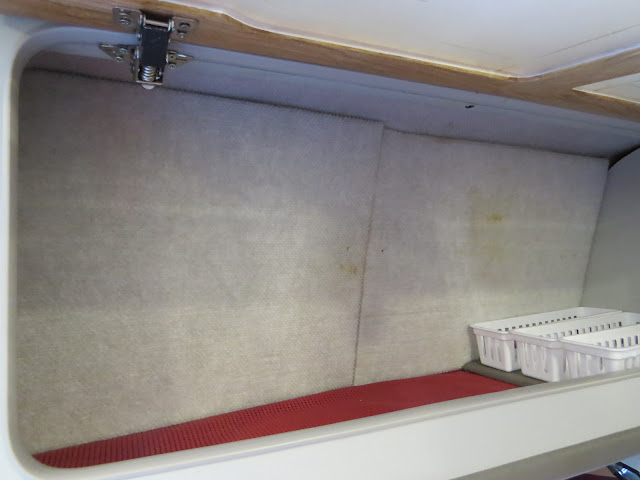 because I spend a lot of time looking at the back of this overhead cabinet where I keep all my dishes, mug, kettle and spices, and looking at those stains there on the back wall is annoying, not to mention embarrassing when someone else wants to take a peek in there too. (OK, that almost never happens, but it could!!)

I've tried doing something about the unsightly view, but those two panels (It has to be two in order to make each one small enough to get shoehorned into the cabinet in the first place.) are covered with a tufted, almost micro-carpet like, fabric that has successfully resisted all efforts at cleaning. 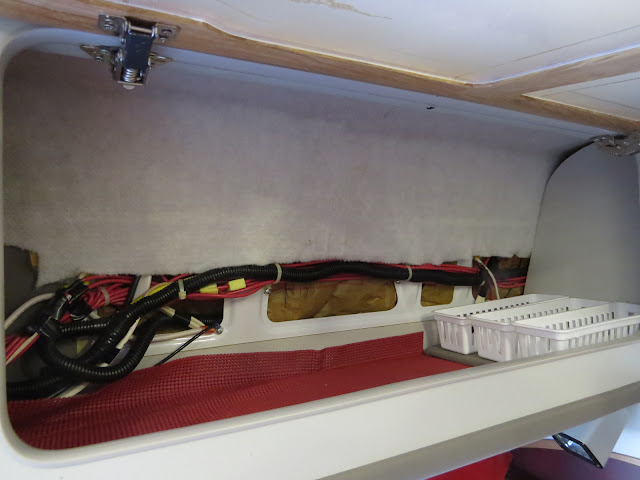 I can't do without the panels because of the jumble of wiring that lurks behind them. (My electrical panel, both 110 and 12 volt, is just to the left and this is the main raceway in and out of it.) 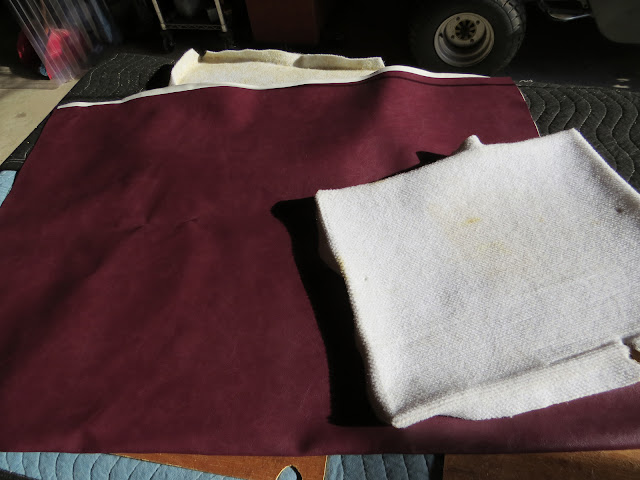 So the obvious solution was to cover the panels with something other than that very stain-prone carpet-like material. (The entire ceiling of The Van is covered in this same material and I'm dreading the day it needs replacing too!!)

I found this cleanable leatherette type stuff in a color that works well in The Van for $8 a yard and snatched it up. (I bought one yard and used about a third of it so I have some left over for later. I'm not sure for what later, but I have it.)

In order to fit into the highly irregular space at the back of the cabinet the panels themselves are far from square and regular, so the sanest way forward was to peel the stained material off the already cut and fitted backing boards and recover those boards with the new stuff. 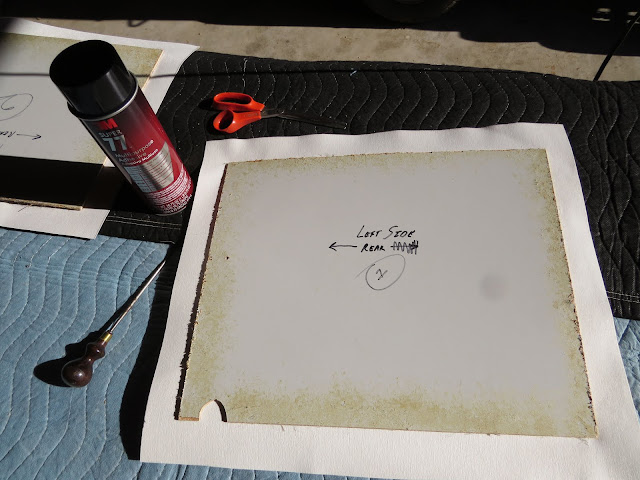 The original covering appears to have been glued on with some sort of contact cement that was sprayed on, and not always very neatly. I have some regular brush-on contact cement laying around but I chose to do my fastening with a spray-on adhesive as well. One that I know from experience I can control pretty well.

After cutting the leatherette to size I gave the surface of the panel a decent coating of adhesive, let it cure about 10 minutes, (If this was a stick and peel situation, such as when I am cutting masks from paper patterns, I would stick everything together as soon as I sprayed the adhesive, but letting it cure a little first makes for a more tenacious bond.) then pressed it, sticky side down, onto a piece of pre-cut leatherette.

At this point I used an awl to mark where the original mounting screws went so I could use the same holes later. 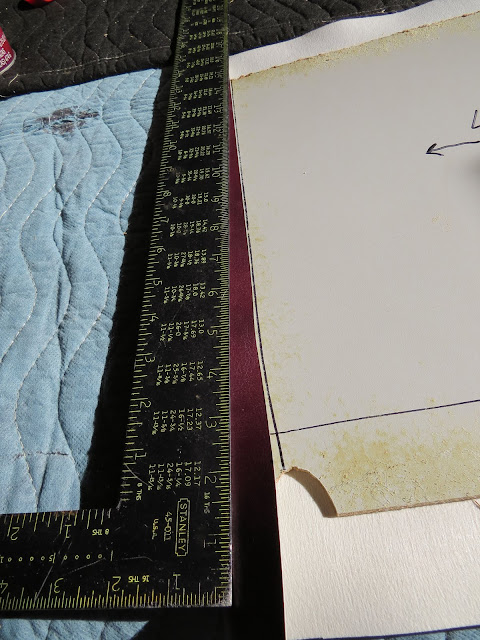 After laying down some guide marks to help show me the limits of where to spray the adhesive, (The yellow stuff is the original contact cement, my adhesive is clear. Sticky but clear.) 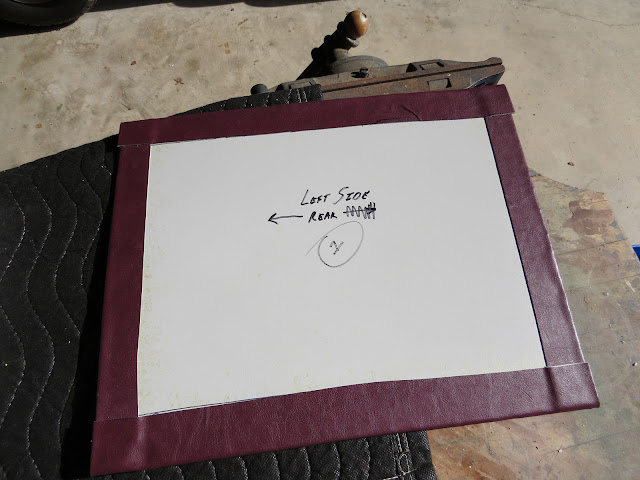 I folded the extra leatherette over the edge and onto the back of the board. Fast. simple, but effective. 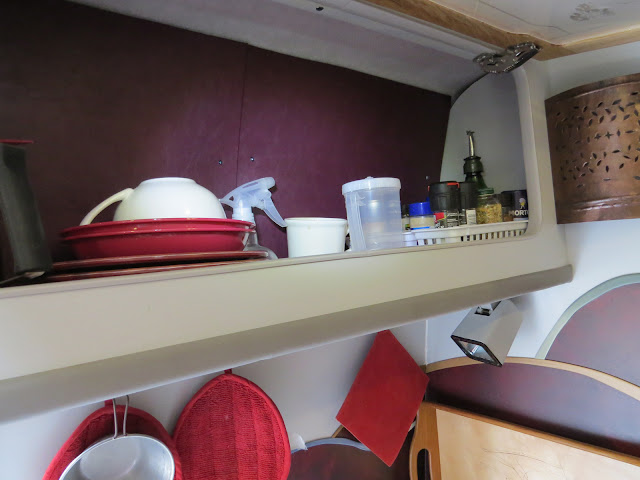 Slip the panels back into place, drive the 4 screws that keep them from falling back out, reload the cabinet, stand back and grin in satisfaction at how much better it looks now, and will look well into the future since the new panels can be cleaned with a quick swipe of a damp rag.

Notice how closely the new panels match the background color of the backsplash, which matches one of the colors in the rugs. 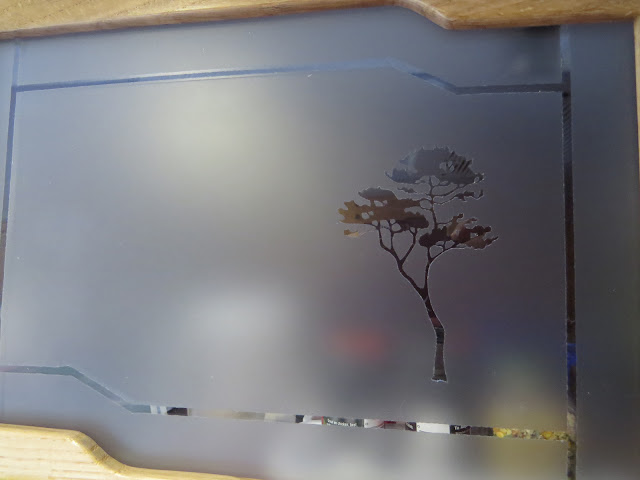 As an added bonus the darker background inside the cabinet makes the designs on the frosted panels of the cabinet door stand out better than they did with the white(ish) background in there.


All right! Time to put van projects on the shelf for a while. Otherwise it's bordering on obsession and I just might find myself on the wrong end of an intervention.

Come on in here and sit down greg.
Why? We're concerned and want to talk to you.
Who? Oh just some family and friends that care.

No, don't be afraid, just put the tools down.
That's right, just lay them on the bench.
All of them.
Including that screwdriver we all know you keep hidden in your sock.

Good, now everything's going to be fine. You'll see. This is for your own good.