OK, I've finally got a stack of 18 cabinet doors, but they're not doing me much good sitting in the shop gathering dust and taking up space. So now I've got to get them into The Van.

But, in large part because I'm reusing the hardware from the original doors, this step goes pretty quickly. 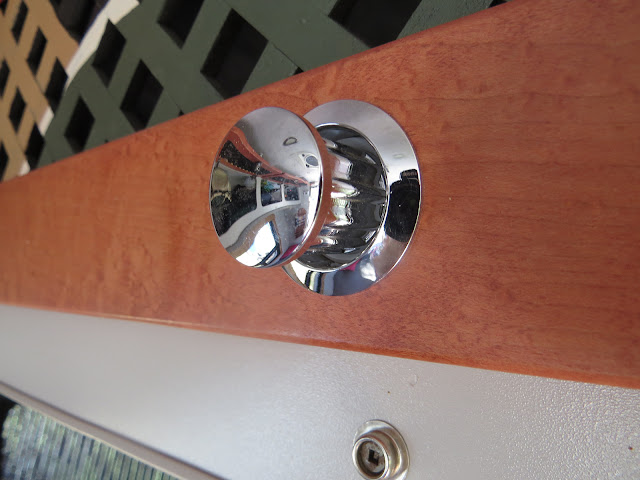 True, the pulls aren't exactly period-correct, but a mobile domicile has a few unique quirks, 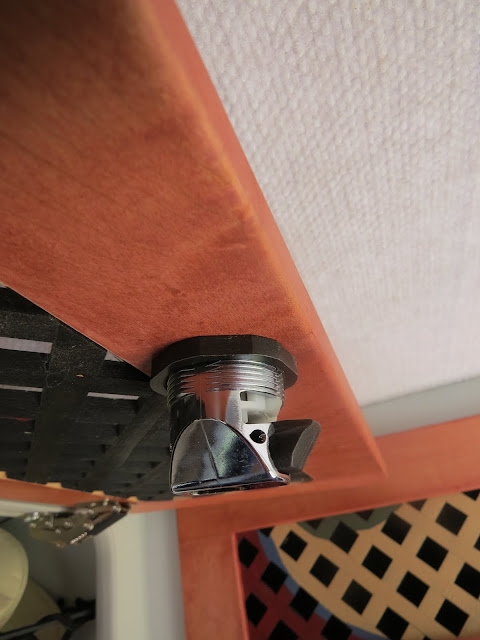 like when slamming and swaying down a Forest Service Road, it's kind of nice if the cabinet doors stay firmly latched. But at the same time I don't want to have to struggle with that latch every time I want to open one of those doors.

I've had up-close-and-personal experience with several types of pull/latching systems, and, in terms of effectiveness and ease-of-use the one currently in The Van wins by a long shot, so I'm reusing them, apologies to the Greene brothers. 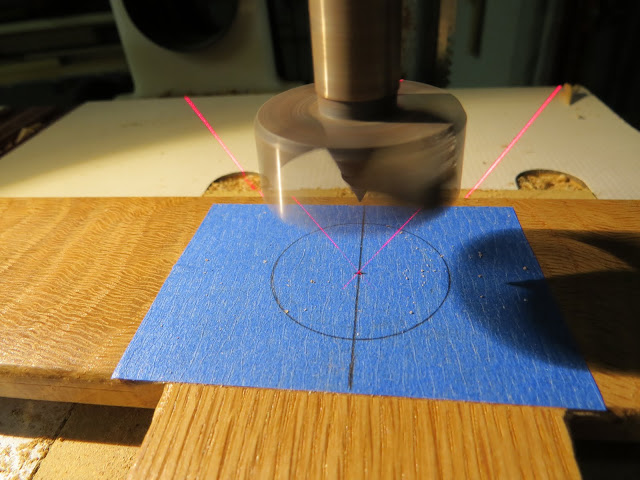 Mounting the pulls is a matter of removing an original door, stripping the hardware and using the frame as a template to mark where the pull goes on the corresponding new door. What I'm looking for here is to make sure I get the pull mounted the proper distance from the edge of the frame to re-use the existing latch-plate without having to adjust it.

Once I have the distance from the edge of the frame I make sure the pull is centered properly on the stile adjacent to many of the latches, then use a 1 1/4 inch bit to drill the hole.

This is probably the trickiest part of the process since I need to drill down from the first side exactly far enough for the centering-point on the bit to dimple the far side of the frame, then turn the frame over and finish the hole by drilling in from the other side using that dimple to keep me lined up properly. This is a bit of a pain but prevents chipping or splintering around the edges of the hole. 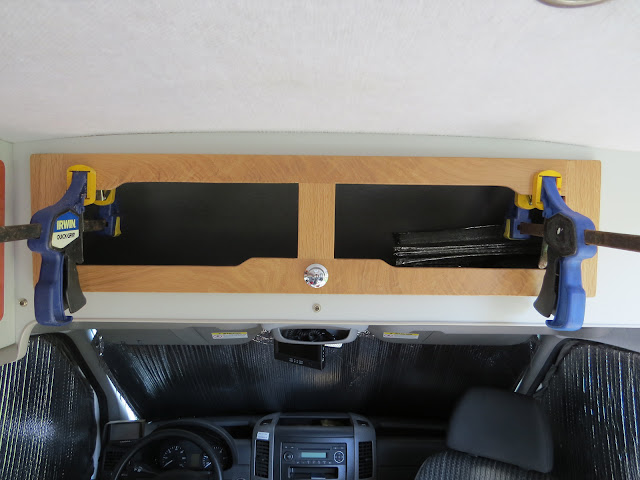 Getting the new frame mounted to the opening is a little more involved. Doing this step before I install the panels makes it a whole lot simpler though.

I hold the panel-less door frame up in place with one hand, using the latch as a guide, then reach through the panel openings and lightly clamp the frame directly to the hinges with the other hand. A little more fiddling and tapping here to make sure I've got the frame centered properly and the latch functions smoothly, and I tighten the clamps down a bit more to make sure nothing shifts during the next step. 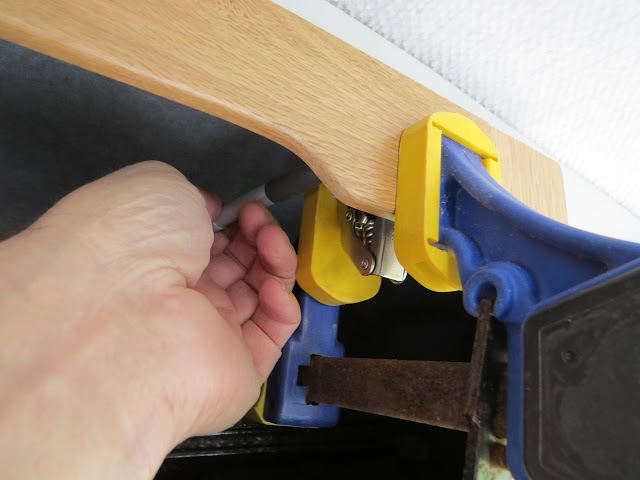 Which is to reach through the opening and by touch alone, mark the position of one of the oblong hing-mounting holes on each hing.

See how a part of the hinge facing the outer yellow clamp-pad is hanging down there below the frame? Well I didn't pay much attention to that but it was going to bite me in the ass later. . . 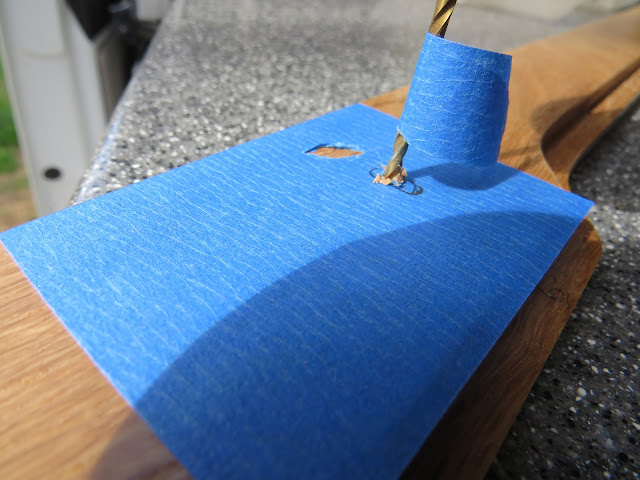 With the position of one hole marked on each hing I remove the door-frame and drill for a screw right in the center of the marked oblong slot.

Drilling right through the door at this point would be a bad thing, to say the least! You can buy stop-collars that fasten to the drill bit via a set screw to limit how deep a hole you can drill, and I have one of these sets hanging around here somewhere, but I've always found it works better to use a little bit of tape wrapped around the bit at the right depth.  It's handy, fast and dead easy to use. When I get down to the right depth the 'flag' of tape I leave hanging off the side of the bit sweeps the chips away giving a clear indication that it's time to stop drilling. (A stop collar could stop short because it's sitting on top of the chips or mar the surface around the hole because it was pressed down too hard.) 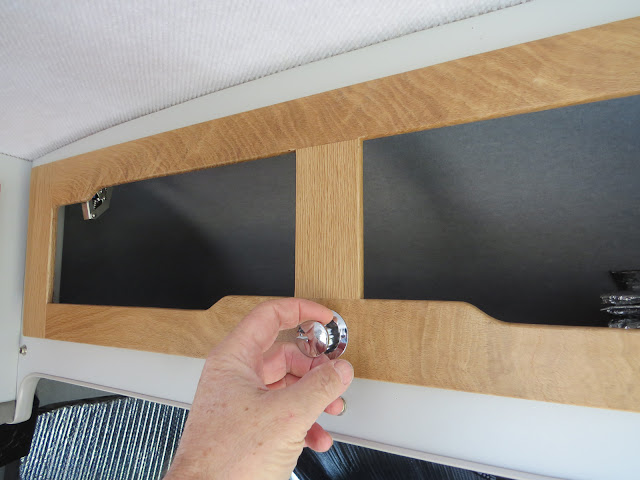 Then it's back to the opening where I mount the door-frame with one barely tightened screw per hing.  And make any final adjustments, (Which is why I use the oblong hole for this step.) before snugging the screw up to keep things from slipping at this critical point. 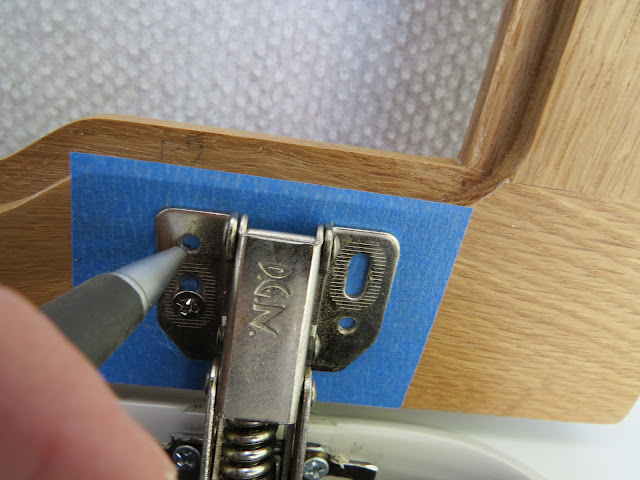 With everything adjusted properly and locked into place I can swing the door open and finally mark for the rest of the screws. (Note that in this case the screw in the oblong hole has been shifted off of center in the slot as I made the final adjustments.) 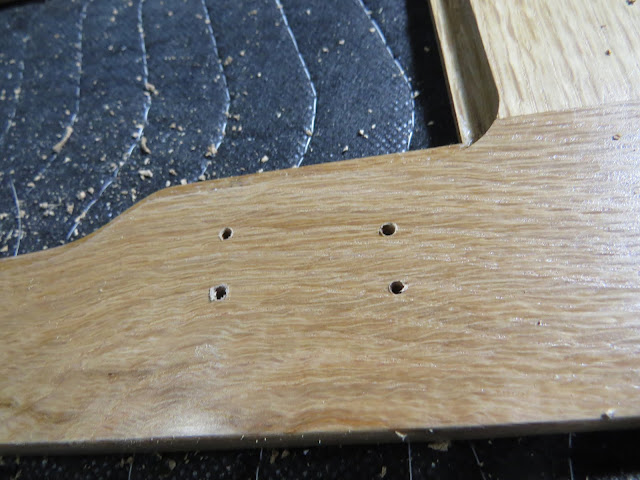 With all the holes drilled and the tape removed, the cabinet doors, with the panels installed, are ready for final mounting. 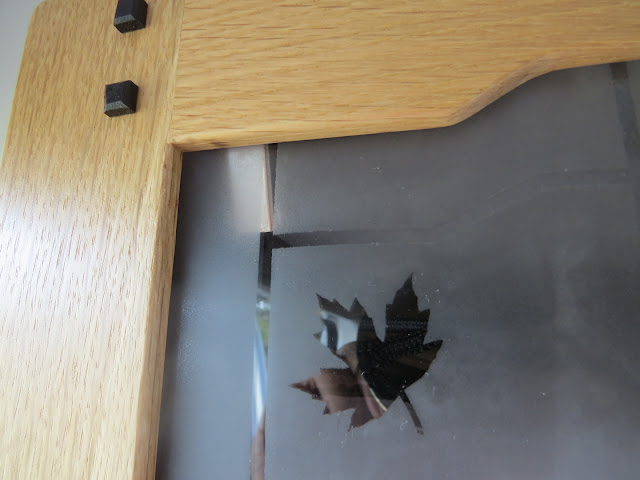 But remember that little bit of hing-part that was hanging below the door-frame earlier?? Yep, there it is, hanging out in the top left corner like a zit on prom night. 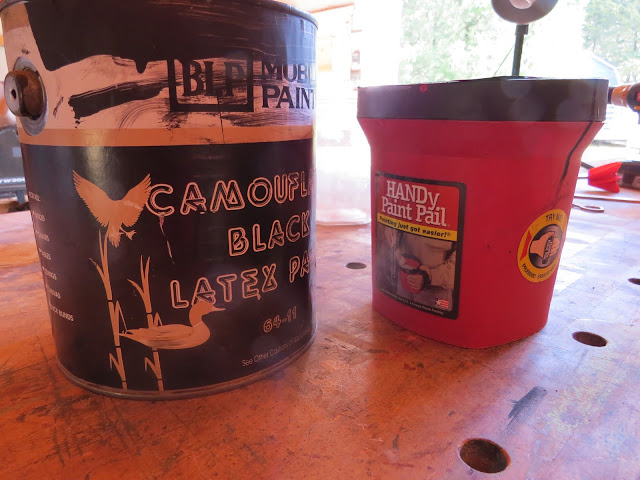 A little desperate casting around turned up an old can of flat-black paint. 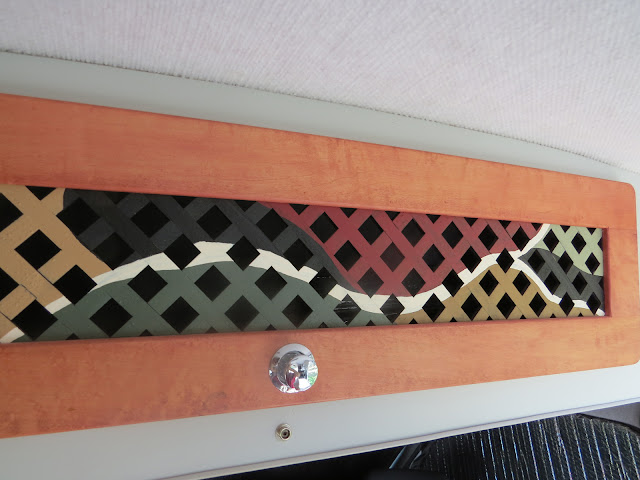 How old?  I originally used it on the lattice panels of the doors I built six years ago when I painted them to match the rug.

So, old enough that it was pretty lumpy no matter how much I ran the battery down on my drill while spinning the paint-mixer. 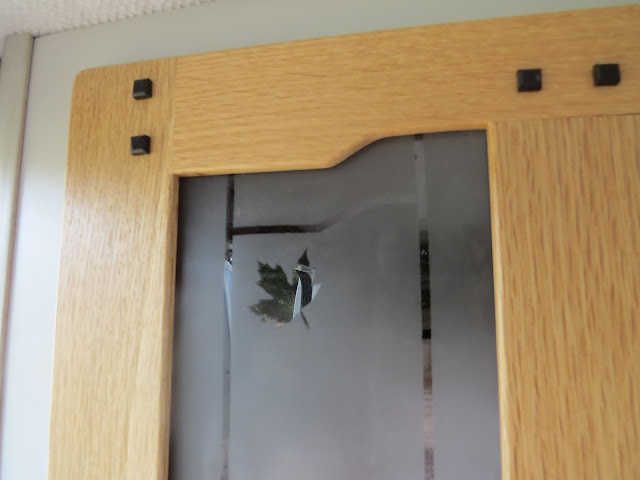 But I didn't need much and after some very careful brush-work, to avoid spills stains, drips and cursing, on that nasty part of the hing, the visuals are much more acceptable.

Next time: The Reveal!!