While I was doing this latest remodel I threw in a few extra things just for good measure. 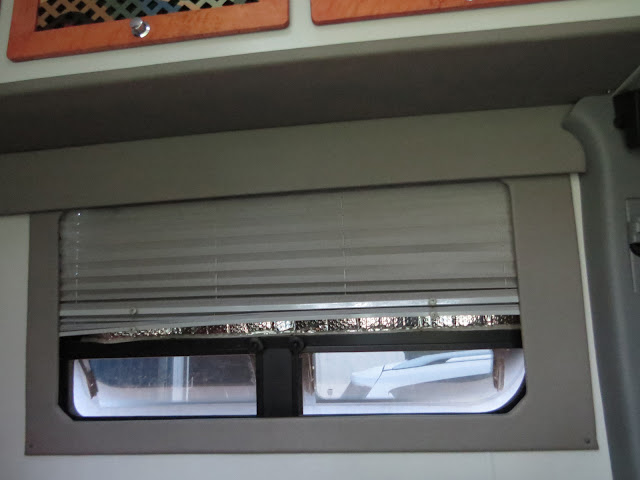 I don't know how y'all feel about the typical RV window treatment, but I haven't been a real fan for a long time. Not only does it often look cheap and predictable, but it also looks so - well - RVish.

When I first got The Van there was plenty of other things to focus on as I went about making it mine, so this window was just - well - there. But after looking at cheap plywood covered with foam and wrapped with less than inspiring grey leatherette, or whatever it is, for long enough, doing something different here became a priority. 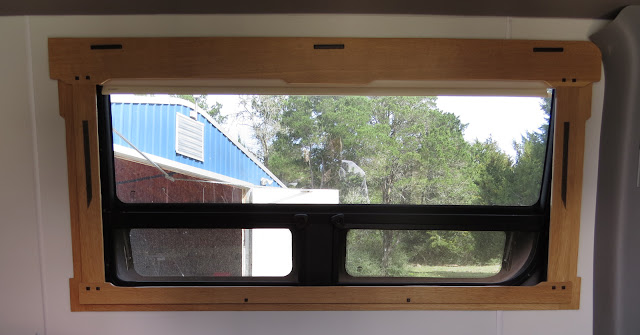 So I ditched the heavy,leatherette covered bolster above the window, (Not entirely sure what the point of that was in the first place. ) as well as the original valence, and replaced it with my own version. 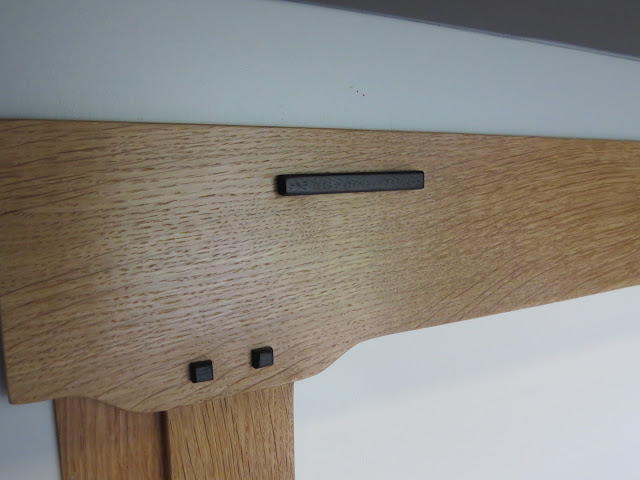 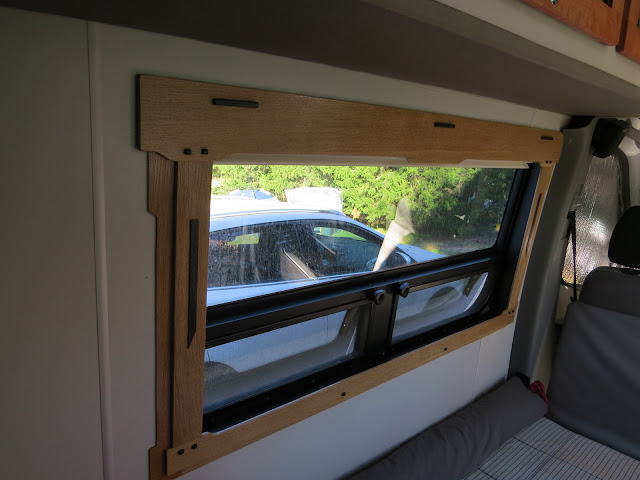 I also got rid of the day-night shade. It's a good concept, but it takes two hands to operate and wrestling with the dang thing was becoming annoying. The replacement is a simple roller shade just barely visible here at the top of the opening. 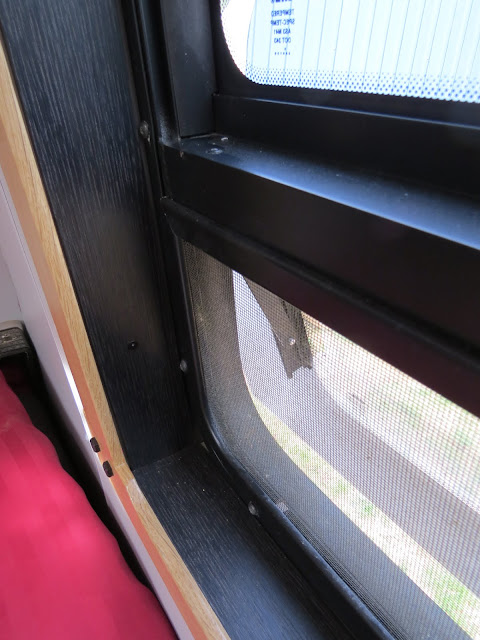 And while I was messing around with the window, I ebonized some 1/8th inch thick oak and cleaned up the sill and side-jams by screwing it down over the grey leatherette that had been glued, not always neatly, over the blocking around the window, using a black marker on the screw-heads to make them less obvious. 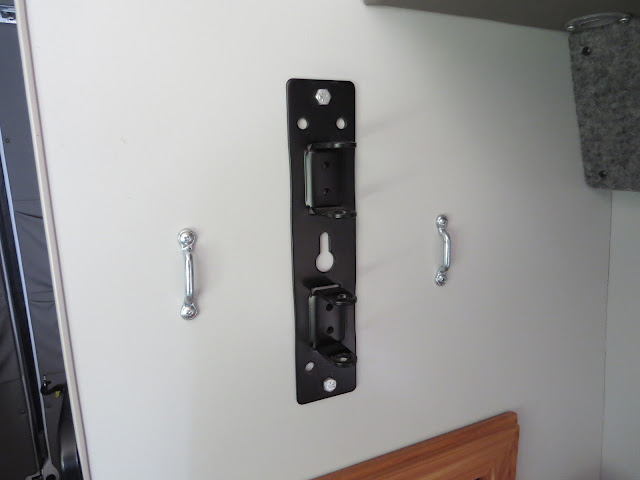 And remember when I removed the TV from The Van and was left with all this mounting hardware, and the holes that went with it? 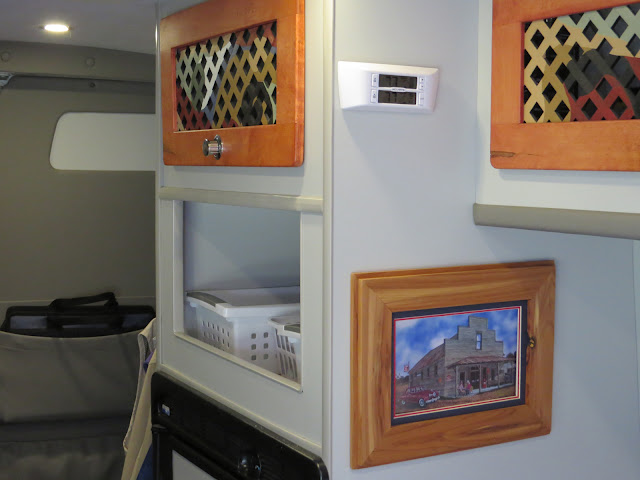 Originally I covered up the holes by moving a picture-frame I already had, but it didn't take long before I figured I could do better than that. 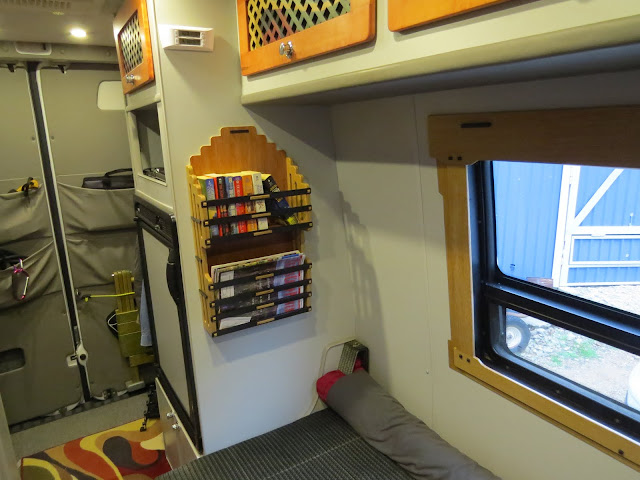 After a bit of brain-storming (Oh yeah, that gave me a headache!) and tossing a few ideas around to see what stuck, I came up with this combination paperback/magazine rack. 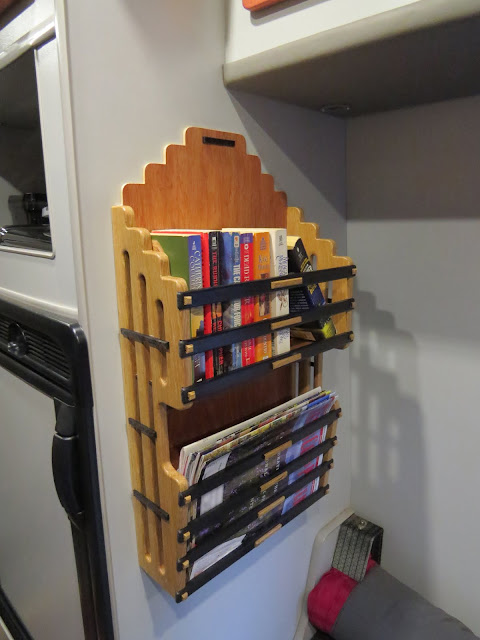 Something that would actually be useful 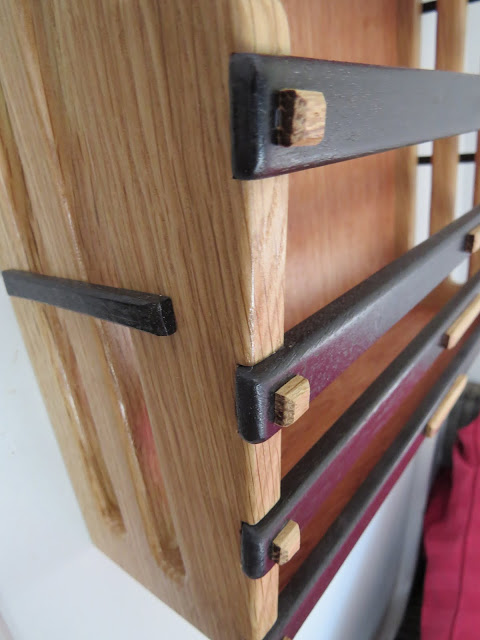 and, as a bonus, it gave me a chance to add at least a hint of the finger-joints that the Greene brothers were so fond of. 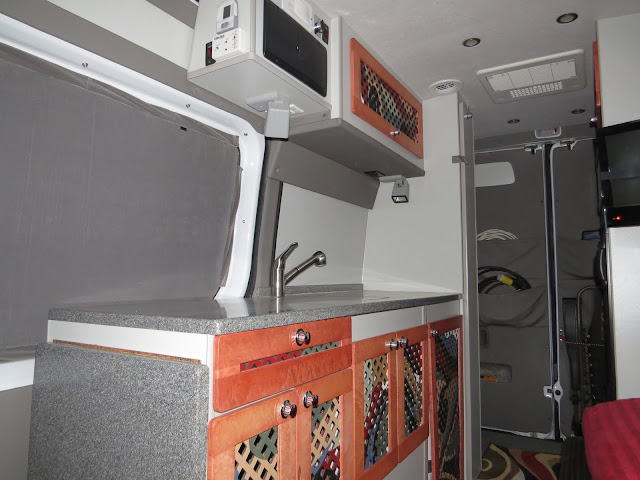 This next 'extra' was really simple, but it is part of the project so I've included it.

The Van came with one of those heavy leatherette covered bolsters over the counter, like the one on the window side of The Van, there just under the overhead cabinet. 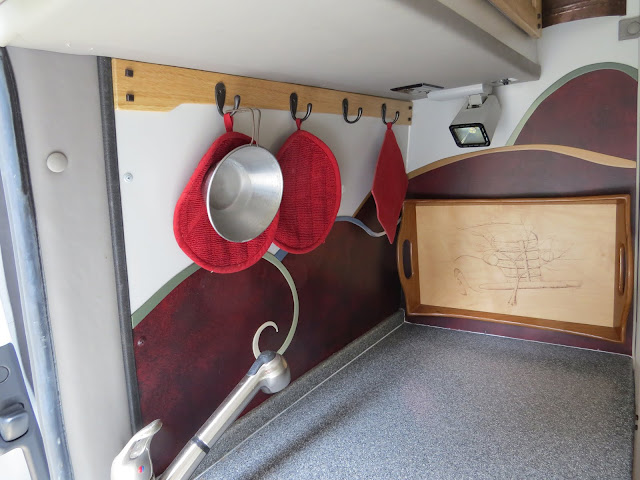 It was a no-brainer to pull that out and replace it with something simple but much more appropriate. 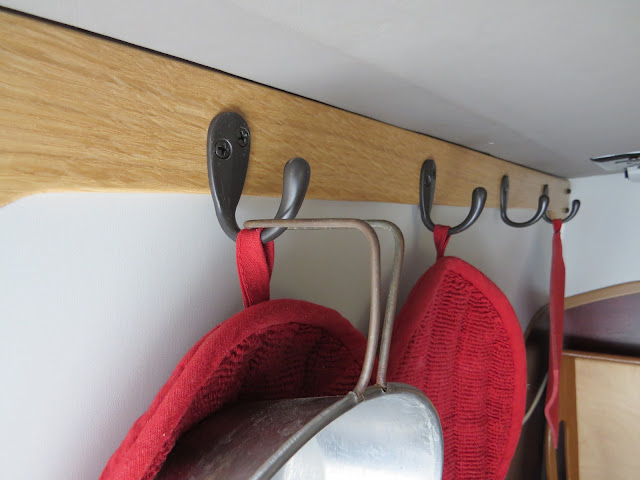 The hooks aren't exactly authentic to the Arts and Crafts hand-wrought iron work, but they did fit my budget much better than the real thing. 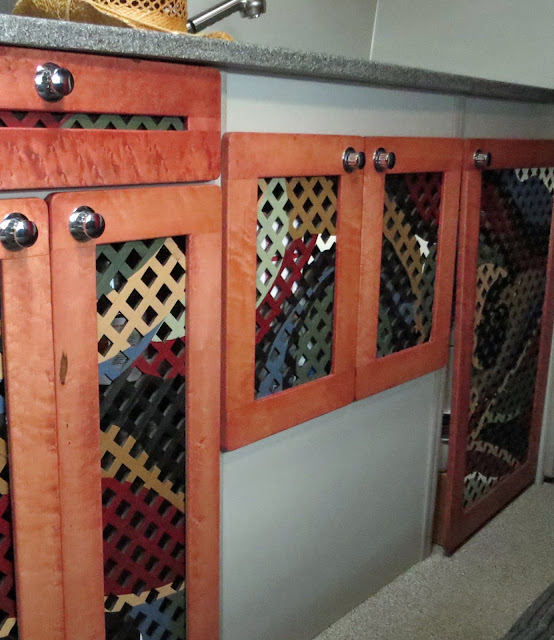 The Van's water tanks, 10 gallons each of potable and grey, are there below the sink behind the white panel. Experience has shown that I go through about a gallon of water a day so 10 gallons is a reasonable capacity. That same experience has shown me that having the tanks, as well as all the plumbing, inside the heated envelope of The Van greatly simplifies camping during the colder months.

When designing The Van I asked for a couple of portals to be cut into that panel so I could see the tank levels. Well that fell through the cracks and didn't happen, but I can see the grey-water tank when the side door is open all the way, so it wasn't that big a deal, though I did have to limit myself to about 3/4's full before dumping/refilling because not all the water pulled from the potable tank ends up in the grey-water tank. 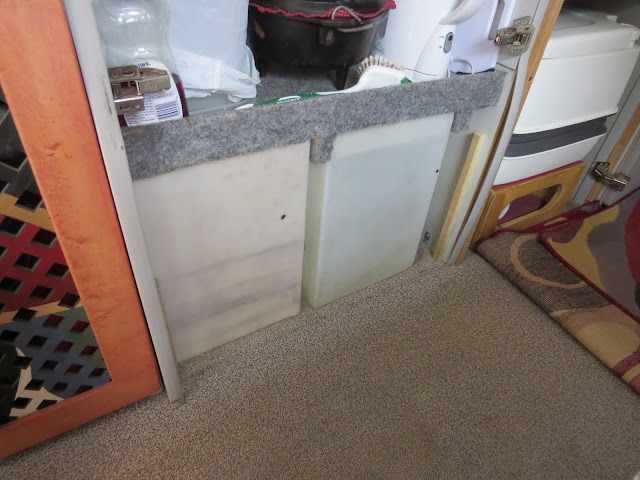 But as long as I was tearing things apart I figured I would remedy that design over-sight by removing the panel, 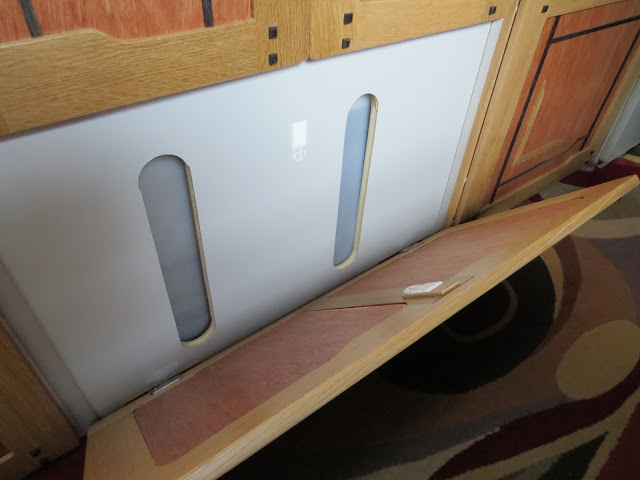 cutting a couple of portals in it so I could easily see the level in both tanks. (Much more reliable than in-tank sensors and costs less too!!) 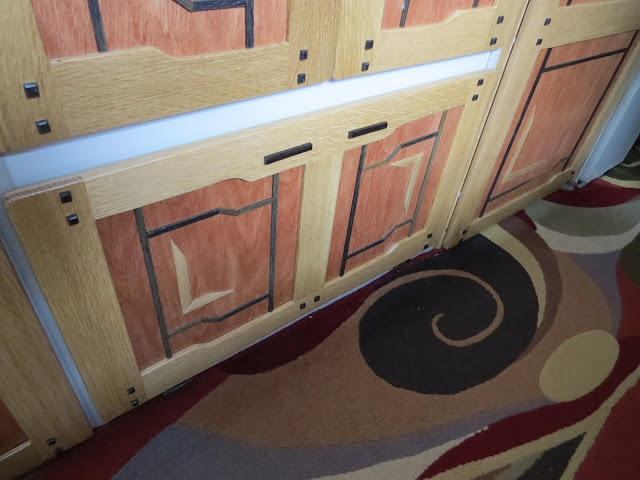 And tuck it all away behind a second hinged panel that matches the rest of the decor. 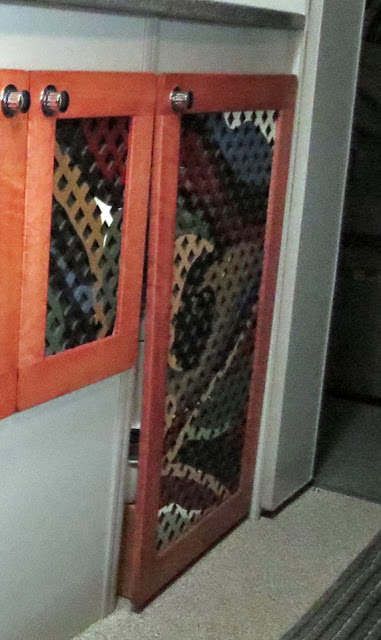 Another long standing issue I had was that when my portable toilet is snugged up against the wheel-well inside this lower cabinet it was still about a quarter inch too wide. Depending on the weather (Which dictates how much the door flexes.) this went from hardly noticeable to hardly ignore-able. 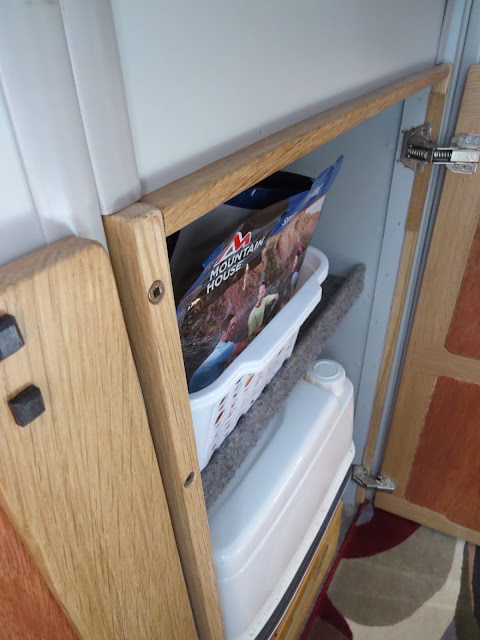 So while I had this area torn up putting in the water tank portals I added a half inch to the framing around this cabinet, remounted the hinges, 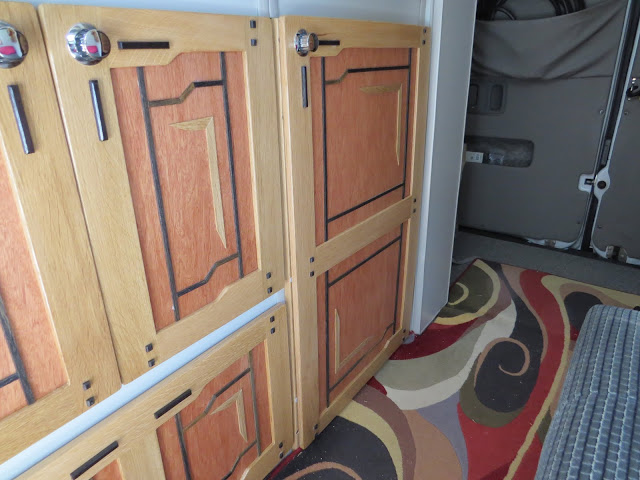 and finally the door closes properly every time!! 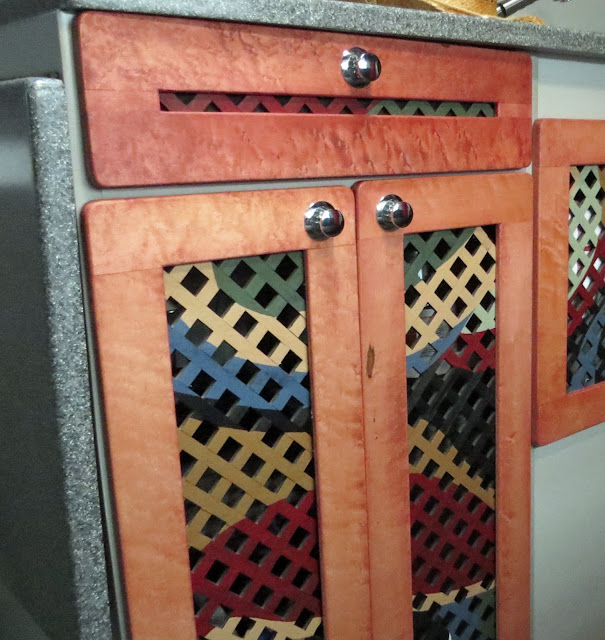 Speaking of doors, the last 'extra' I'll mention has to do with this set of double-doors under the drawer. These doors are each 10 inches wide, not quite wide enough to get my frying pan, or much of anything else, through, so every time I needed something from this cabinet, (Which is where, in addition to the frying pan, the stove, stove fuel, potable water hose and my tool-bag live, so I need something from here a lot!) I had to open both doors, which either took two hands or two operations with one hand, and it was getting old. 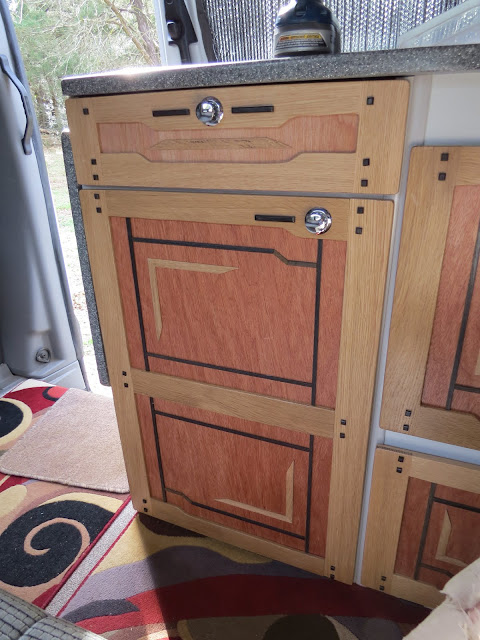 So I replaced the pair with a single door. 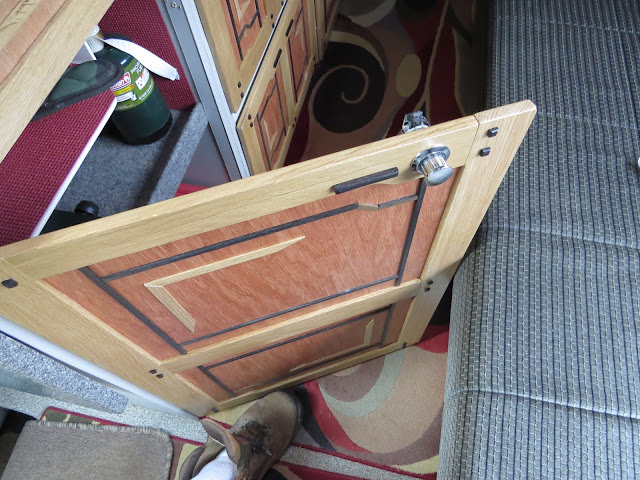 Of course there was a reason for the two narrow doors. A 20 inch door and an 18 inch isle-way just don't go together very well.

But not to worry because this time I was paying attention, 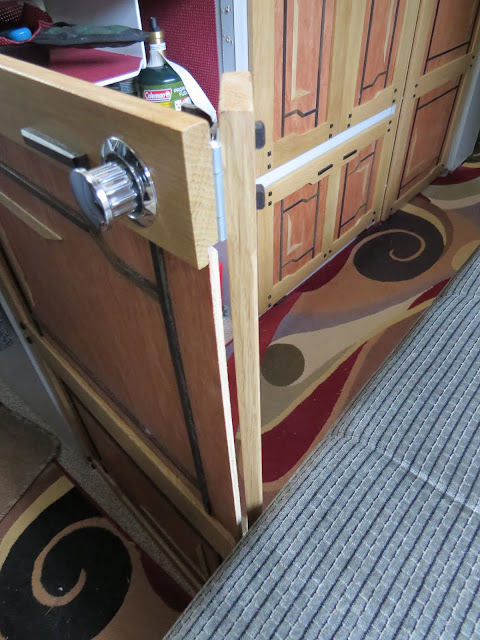 and built a magic 20 inch door 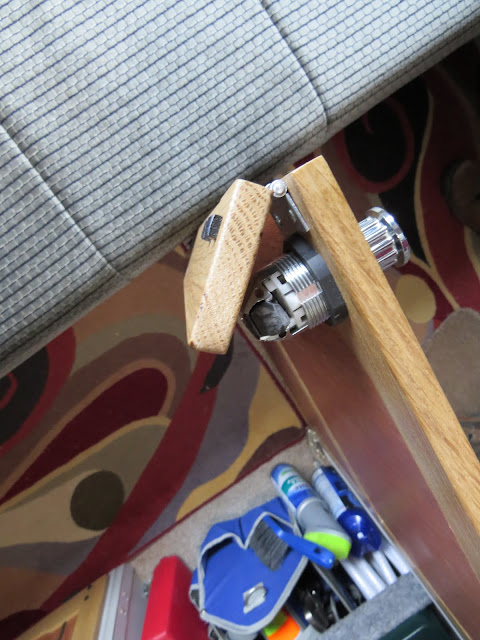 that opens into an 18 inch isle-way just fine!!

OK, you can relax now because that's it for this remodel project. 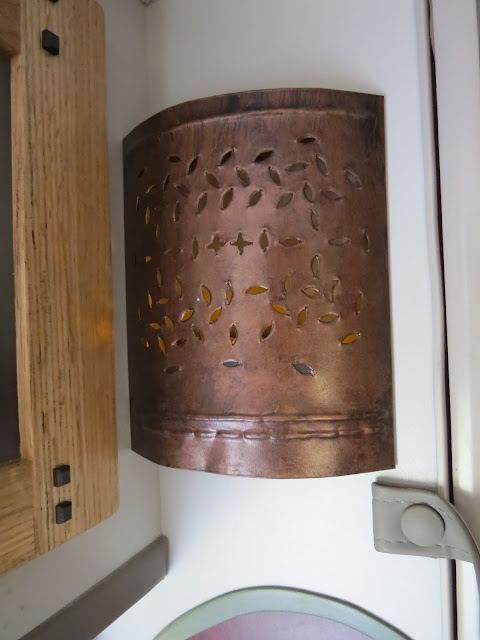 Wellllll. . . Remember a couple years ago when I built this mini fireplace of sorts??

Doesn't that seem like the perfect place to build a Greene and Greene inspired sconce instead??? 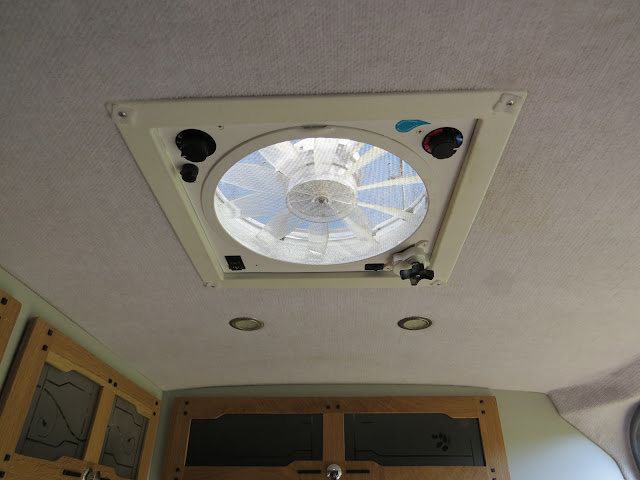 And I really should think about trimming out the vent fan with something better than white plastic, and - OK, you're right. Maybe I better give it a rest for a moment and perhaps start a puzzle instead.

Besides, there's the rampant blackberrys on the far side of the pond that need to be cut back before spring get here, and a couple of dead trees I should really take down before they fall on something important, and the dead lawn mower needs looking after, and . . .