Apr 11 2013
This morning I headed north out of Silver City on SR15. This is not a road recommended for large RV’s, but of course I’m not large.
Just a few miles north of Silver City I took a short detour down Main St. in Pinos Altos. This was a mining town that, like many, flourished for a short while then pretty much became a ghost town, but has since been revived as a tourist destination and, if they aren’t original, many of the buildings on Main St. look like they are. Well worth the detour and a few photos, but today the pines, streams and mountains were calling so, though I did detour, I didn't linger long enough to take any photos but rather just drove on through.
﻿
Shortly after passing through Pinos Altos I crossed back over  to the west side of the continental divide and into the main part of the very large Gila National Forest. From here on the road twists and turns as it negotiates its way up the Pinos Altos Range and across Wild Horse Mesa before dropping down towards Sapillo Creek. 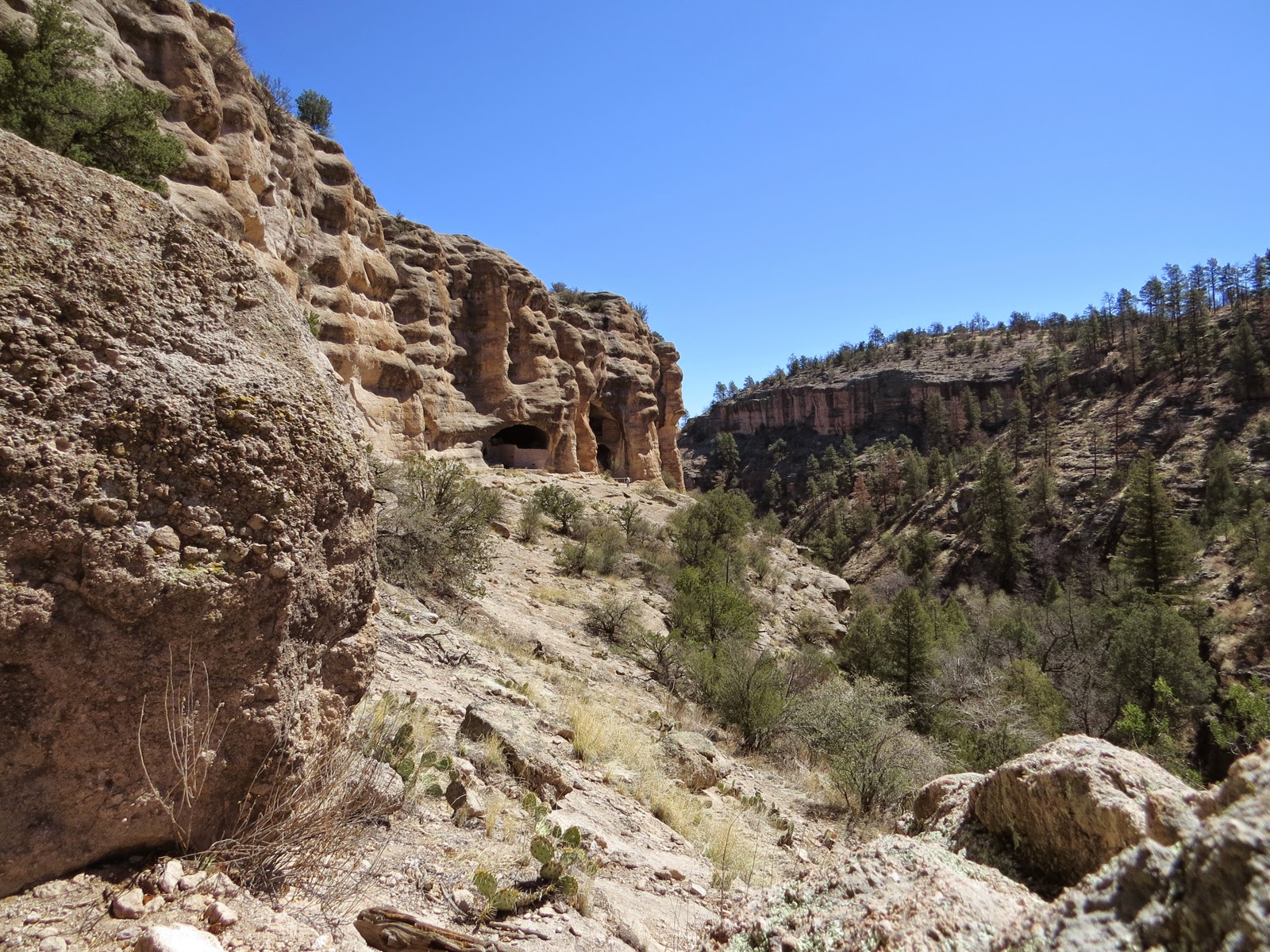 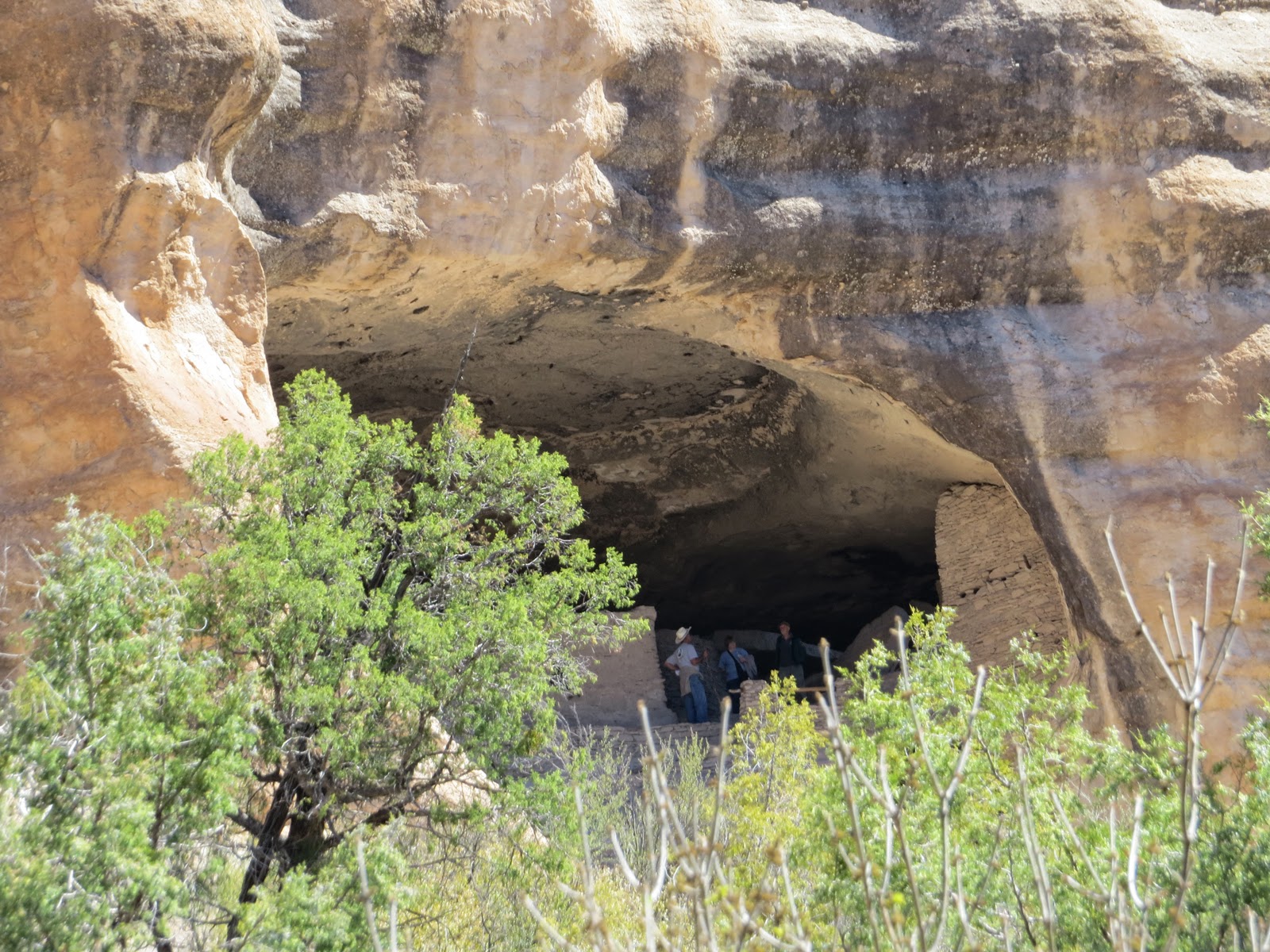 After one of my numerous stops to take in the scenery, dabble my toes in one of the irresistible creeks, or poke my nose just a little ways down some of the trails, I climbed back into the van and it promptly threw an EDI at me. EDI is a fancy term for the check engine light and believe me, an EDI is not something you want to see when you are 20 miles from anywhere, including cell service, and all alone on the road!! Heart pounding I used the touch-screen on my Dash Daq to read the fault code but that didn’t help much because even then I couldn’t figure out what the heck it actually meant. (Update 2014: After the trip I asked a Mercedes service manager, and several of his techs, what the code meant and they couldn’t give me an answer either!). Using the Dash Daq I cleared the code and breathed a sigh of relief when the EDI light went out. About two minutes down the road I started sweating bullets again because the EDI came back! 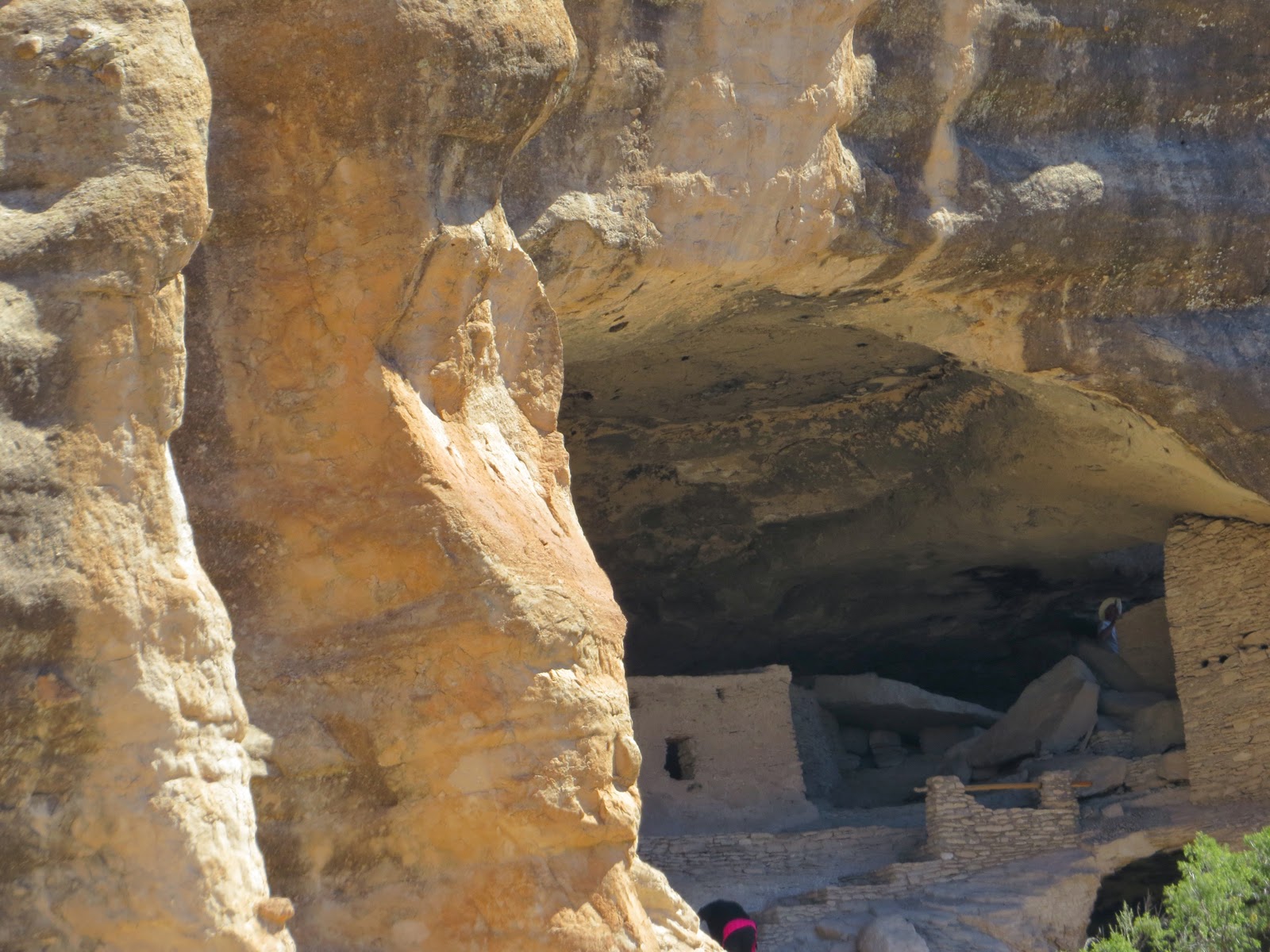 Everything seemed to be running alright, and I kind of doubt there is a Mercedes or Freightliner service shop in Silver City anyway, so I mopped the sweat out of my eyes and continued on my way. Ignore it and it'll go away - right? 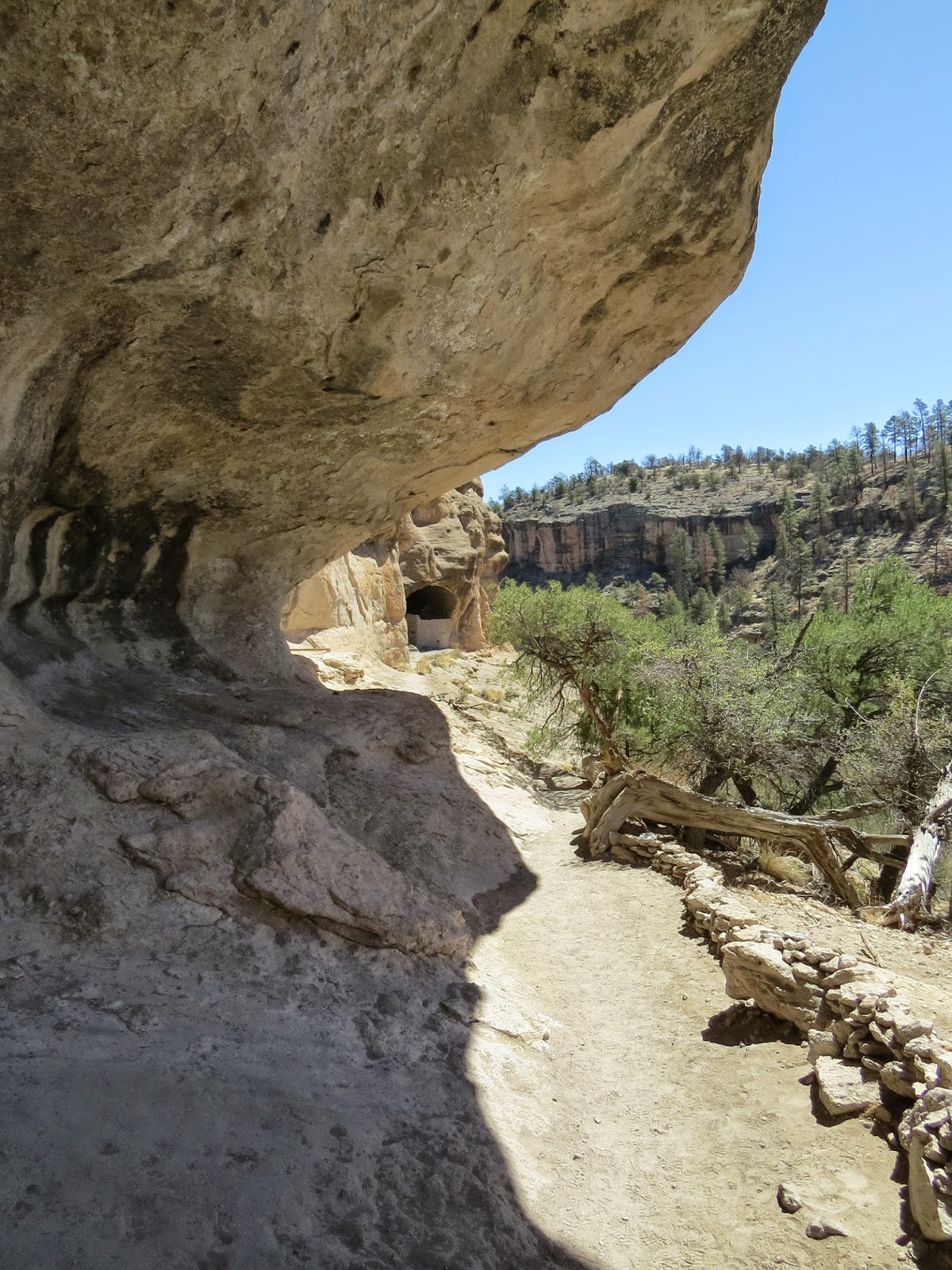 Just after crossing Sapillo Creek SR15 intersects with SR35. SR35 is the recommended route for large RV’s, but, large or small, from that intersection on the only way to go any farther is up SR15 as it continues its twisty, windy, up and down journey to the small community of Gila Hot Springs, then on to the Gila Cliff Dwellings.

The scenery did its best to distract me from that bright amber light on the dash but it was still a relief when I eventually pulled into the Gila Cliff Dwellings Visitor center and made it go away by turning the van off.
After checking out the exhibits at the visitor center I went on up the road just a little farther to the trailhead for the climb up to the cliff dwellings themselves. In fact there are several trailheads here as the Gila National Forest is crisscrossed with tempting trails. 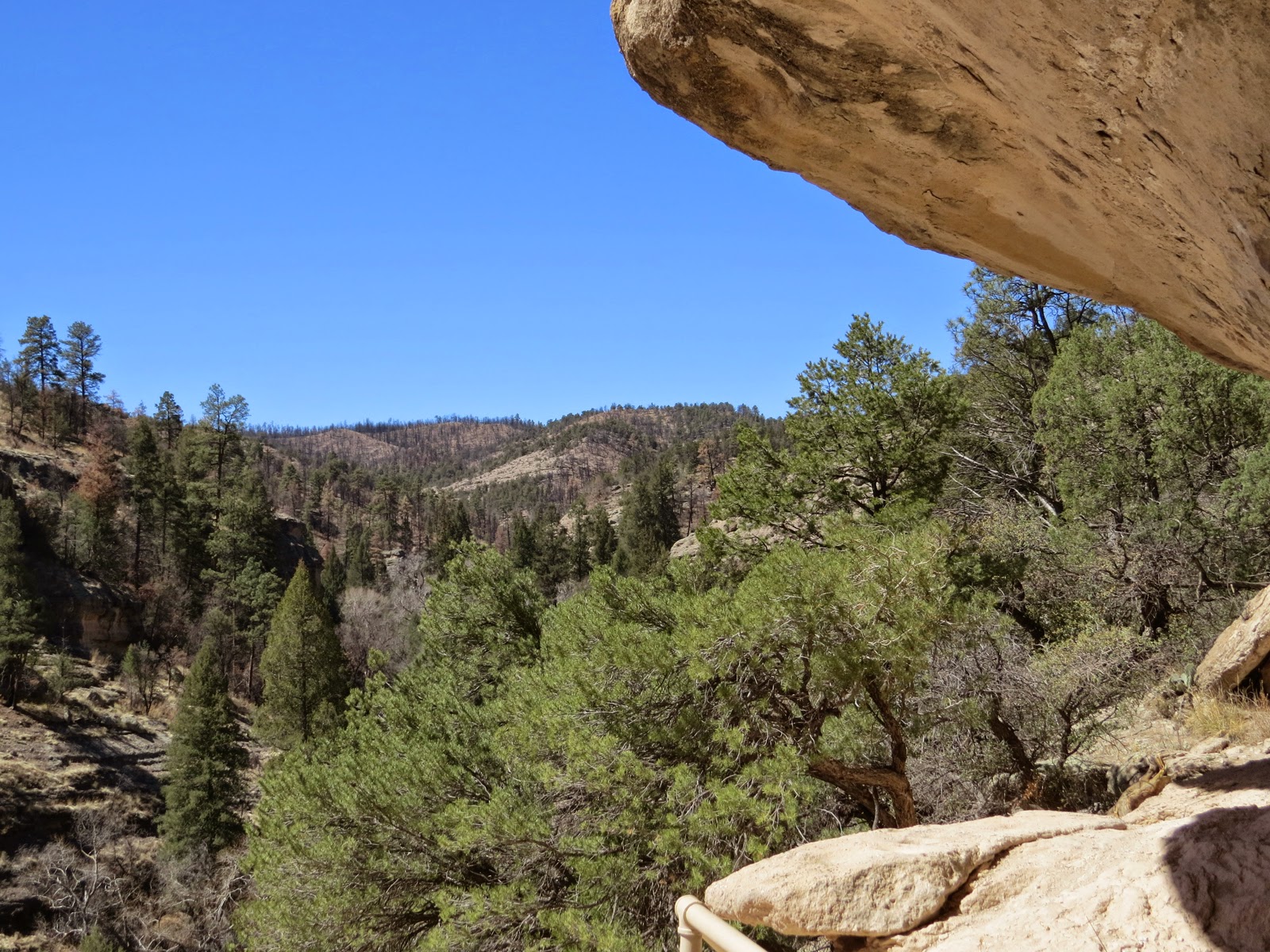 From the trailhead it’s a short climb up a narrow ravine then some switchbacks to the dwellings. These are pretty impressive cave dwellings that were inhabited by people not normally known for making their homes in caves, but once you get up there and see how they are situated in a promontory with a feeder stream down in that ravine on one side and the valley of the west fork of the Gila River on the other you can understand why they picked this spot. 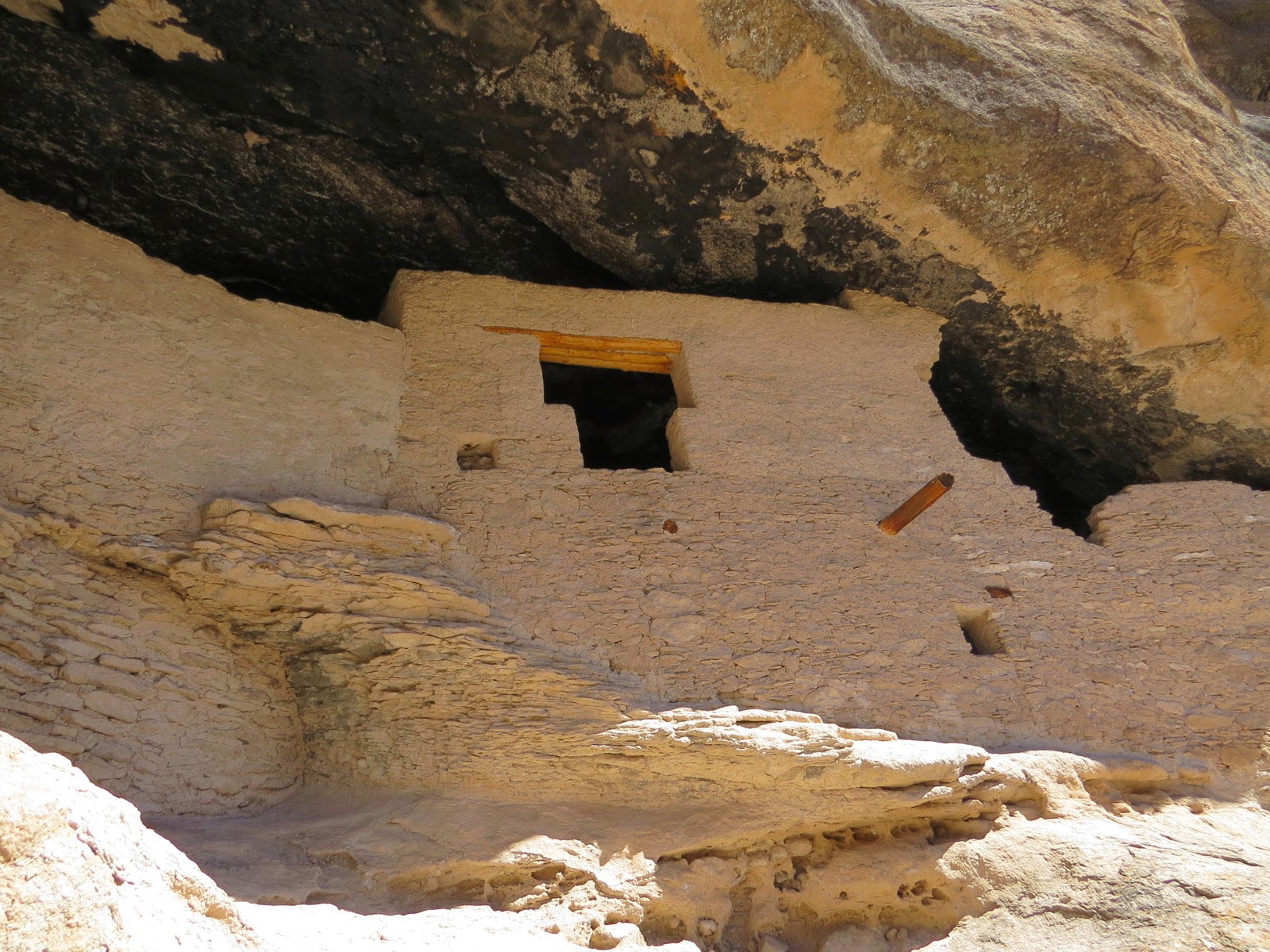 At first it seemed to my 'modern' eye (Face it kids, it won't be all that many years before today will be the good ol' days of the past and 'modern' will have moved on.) that this place is an awfully remote and isolated spot to create a community. But once I found a quiet spot, sat down and thought about it, I came up with a different perspective. 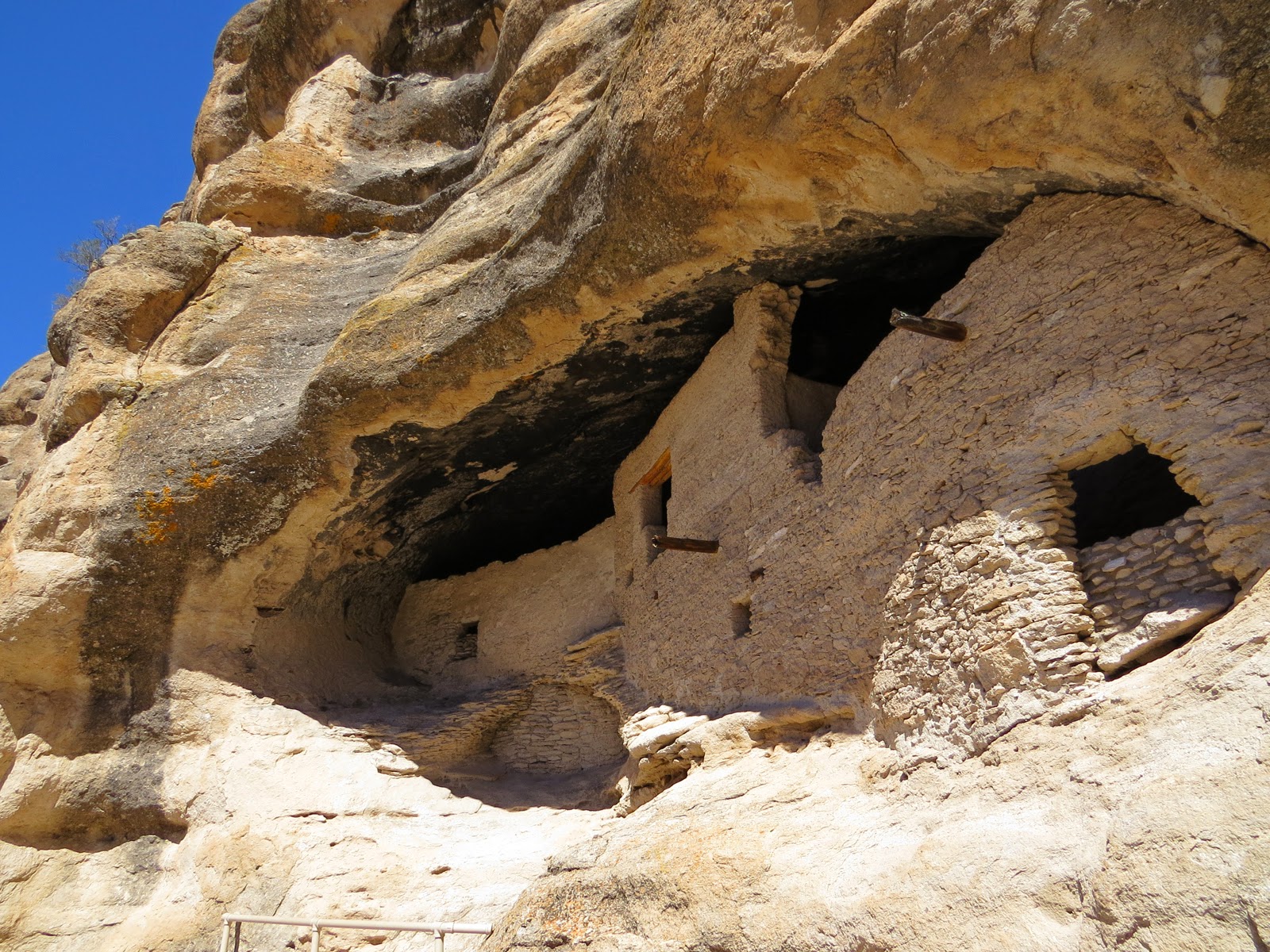 I once heard that half of the human's that have ever lived in the past ten thousand years or so are still alive today. (If you take a look at the chessboard and grains of rice exercise that's easier to believe. Put one grain of rice on square one then double that for square two and double that for square 3 and so on. By the time you get to squares 24 & 25 you jump from over 8 million grains to more than 1.5 billion. If that's the era you live in it makes the 64 measly grains sitting on square 7 rather difficult to put into perspective. in fact, take it all the way to square 64 and the second half of the chess board will have over 2 billion times more rice on it than the first half. Square 64 alone will have 9,223,372,036,854,775,808 grains of rice on it!)  All of which means that our current sense of population and isolation is wildly skewed from that of people that lived even just 700 years ago. 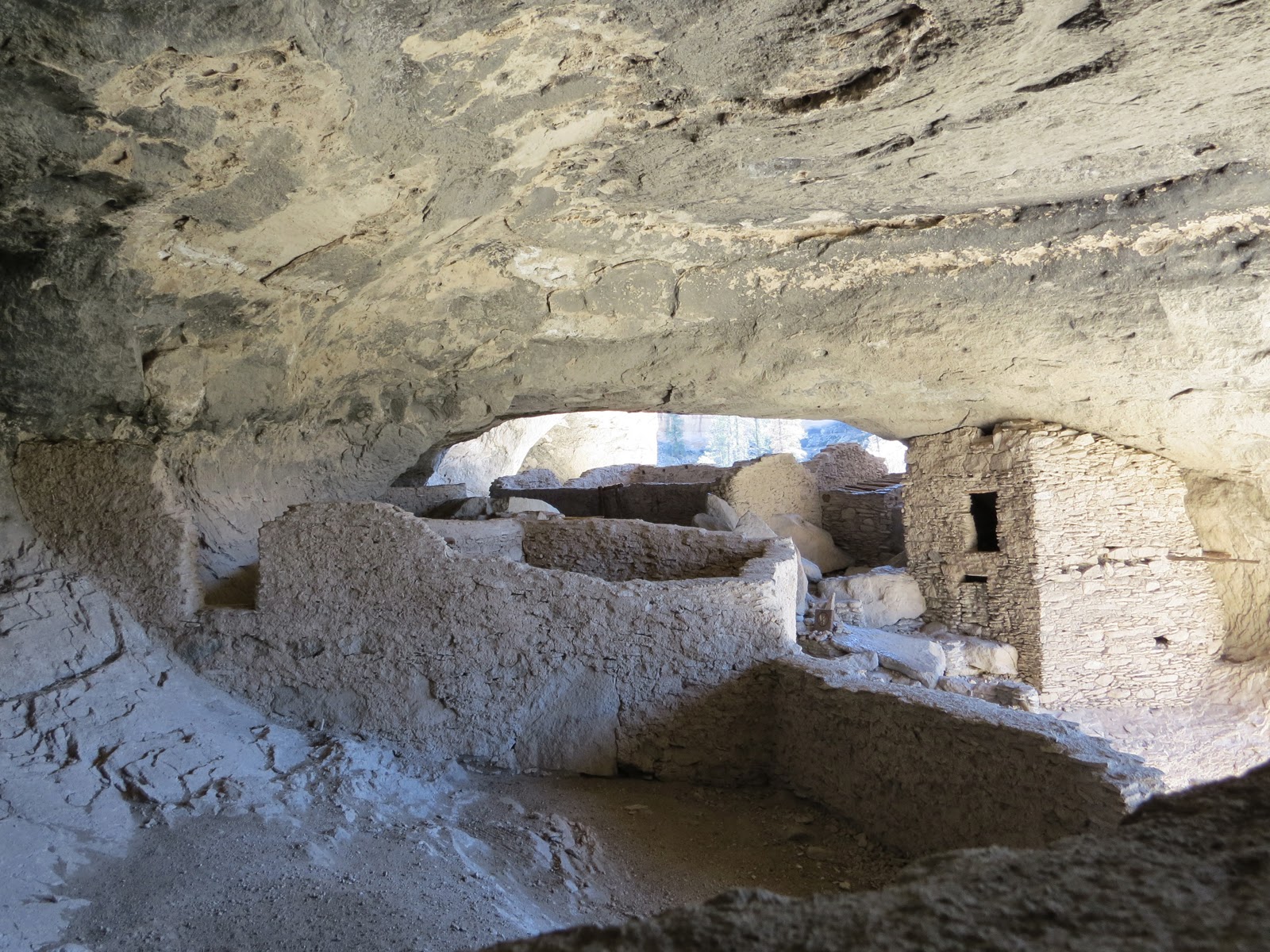 In the sixteenth century Machu Picchu was the political and spiritual center of the Inca empire, the capital as it were, yet the total population of 1000 would barely be considered a village today. So in the context of that I don't think it's too much of a stretch to think that the 100 or so people that lived here at Gila Cliffs in the fourteenth century made up a significant population center and weren't nearly as isolated as I might think from my perspective today in the 21st century. 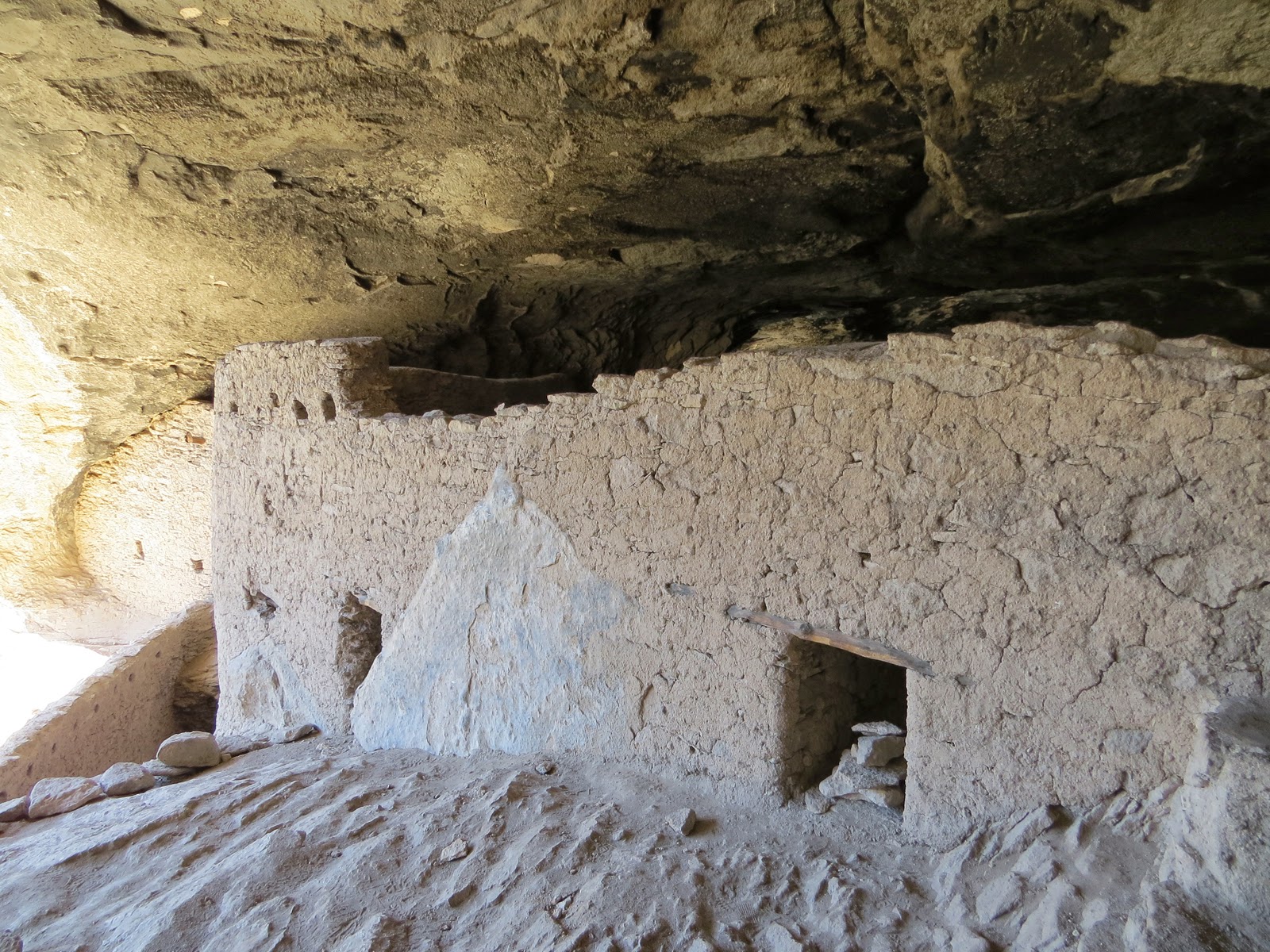 But that doesn't change the fact that I’m pretty sure I wouldn’t be able to feed, clothe and protect a family out here with the tools available to them seven centuries ago, probably not even with the tools available today! It makes you think about the work and hardships these, and pretty much all, people faced for simple survival and how vulnerable we are today because we have lost so many of these basic skills. 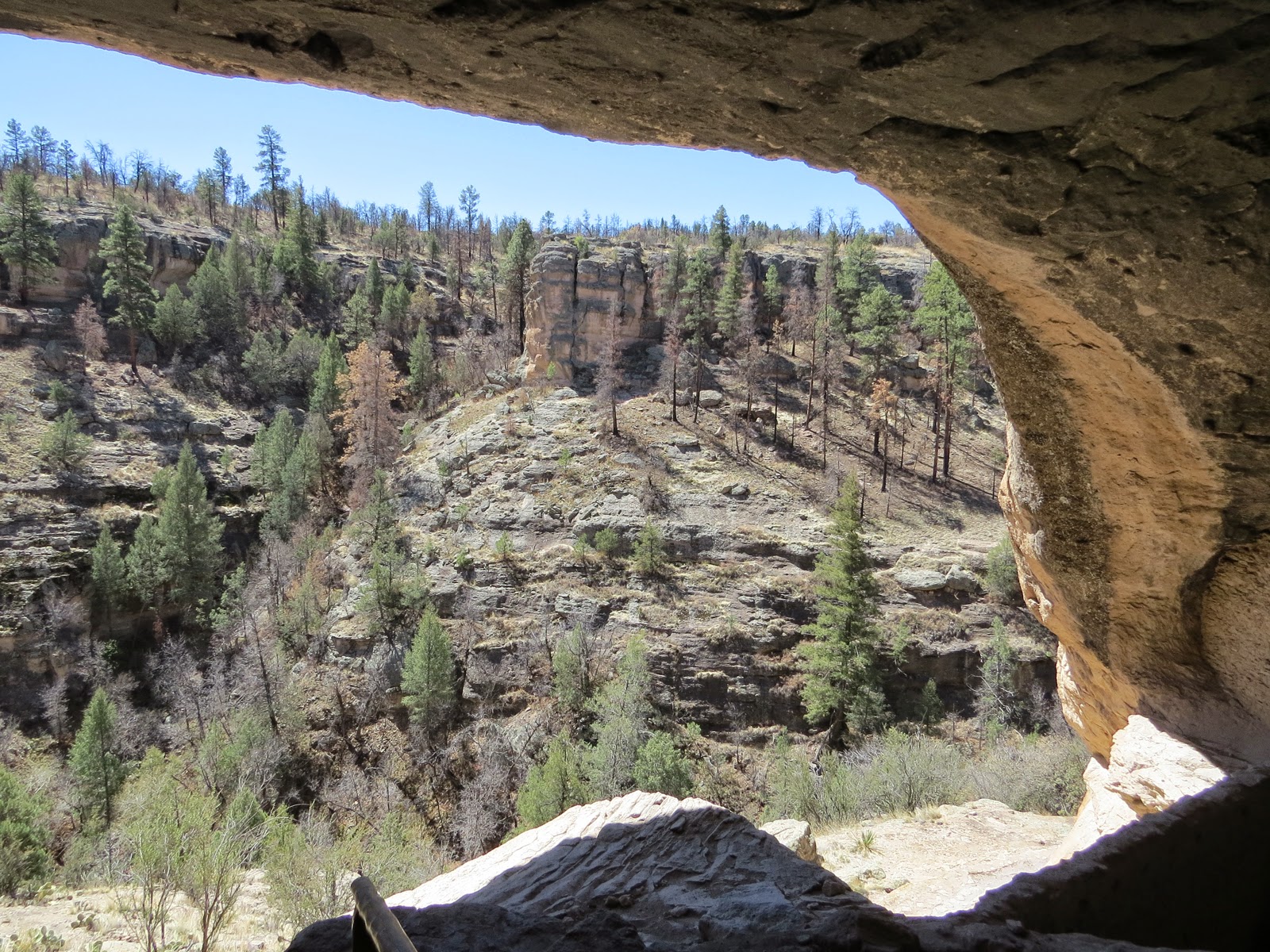 OK, after scaring myself with thoughts of vulnerability, on the way back to Silver City I took the gentler SR35 route. I had planned to do this anyway to see that much more ground, but with that yellow light staring out of the dash at me I probably wouldn’t have tackled SR15 going back the other direction anyway.

Even though SR35 crosses back over to the east side of the continental divide along here it still seemed like a nice gentle, valley-bottom drive. Along the way it passes a couple of lakes and campgrounds and several trailheads as it works its way back to SR152 which takes you across to US180 and Silver City. 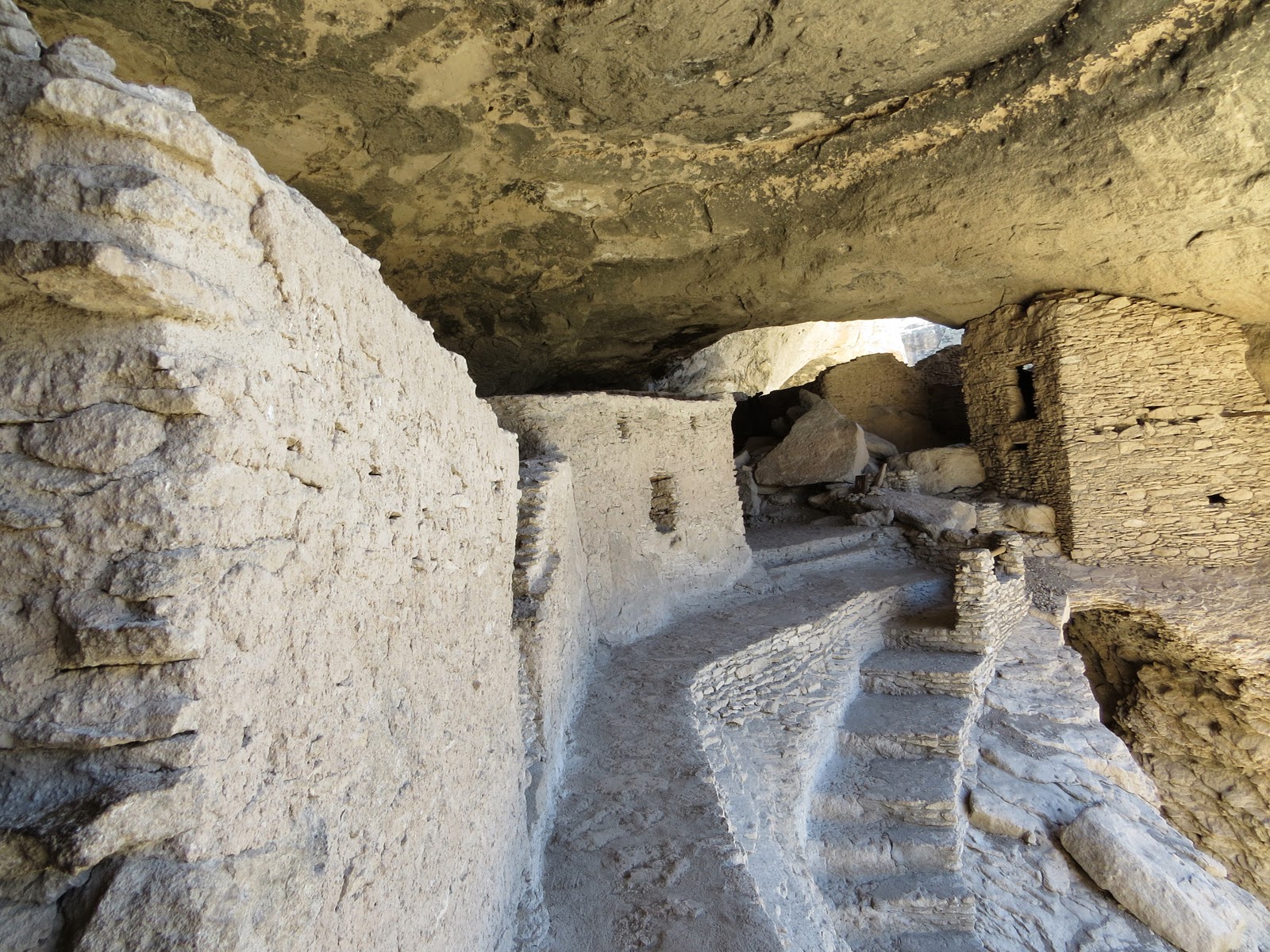 This evening closer inspection of my map shows that I should have cut the corner between SR35 and SR152 on Georgetown Rd. I see now that it is designated a scenic byway but missed that when I was out there.

I did stop at an overlook for the Chino mine, a massive open pit copper mine that you can actually see from Silver City once you know where to look. 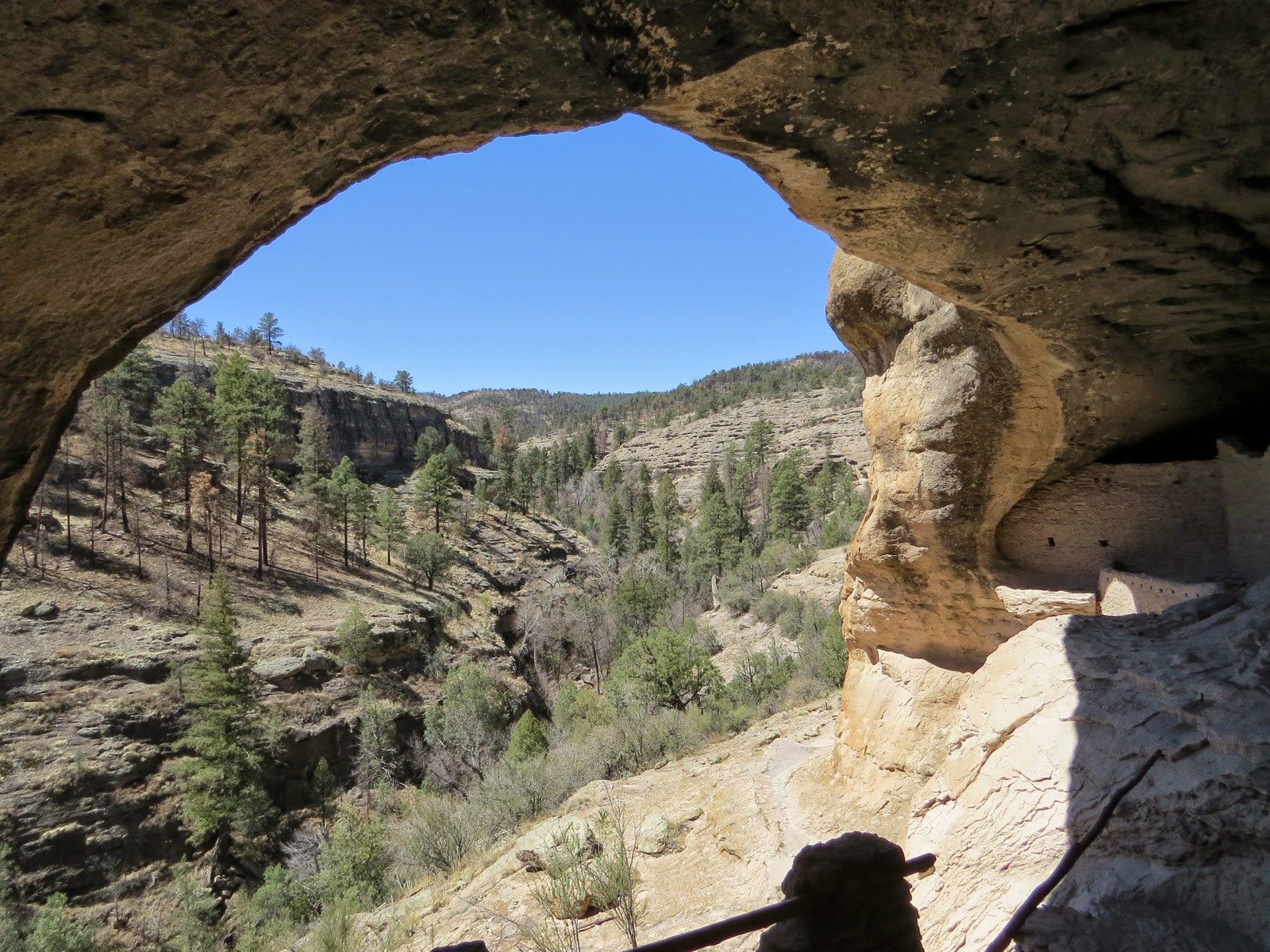 I must have stood there at the fence for over an hour with my binoculars watching massive machines digging up huge hunks of earth and others hauling ore and overburden out of the huge hole. Some of the trucks would load up way down in the pit of the mine on various precarious man-made ledges then climb the spiraling ramps up and around and eventually dump their loads at a collection point for ore. Others would climb even higher and backup to the edge of dizzyingly high and steep slopes and dump the overburden over the side. 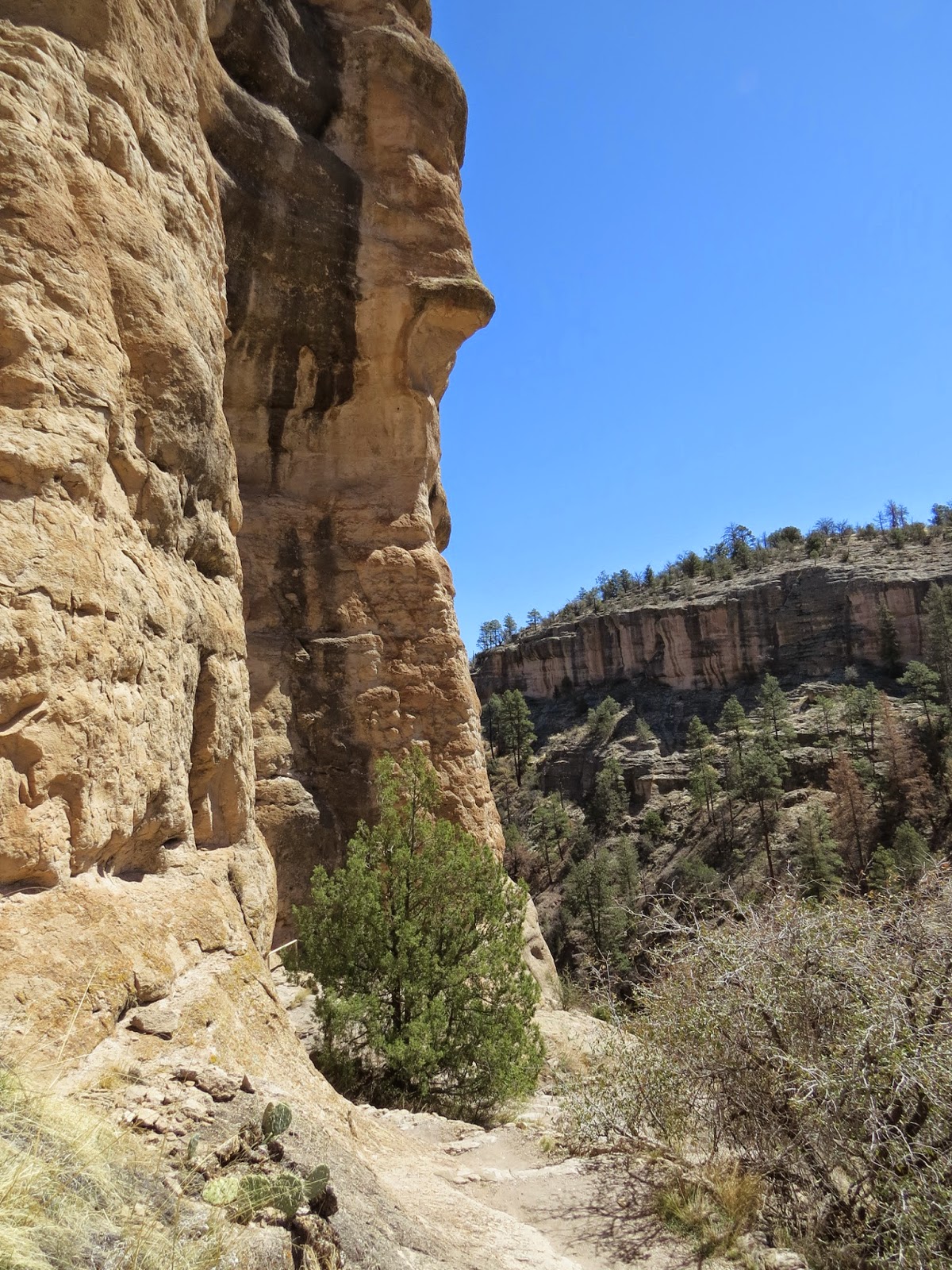 The town of Santa Rita had to move several times as the mine swallowed up more and more land until it eventually just faded away altogether in the 1960’s.

Like the massive piles of tailings that bury the original land forms in the area between Questa and Red River New Mexico, it kind of makes me queasy to see the land ripped apart and scared like this, but at the same time I’m certainly using my share of the products of these mines and would not be happy doing without. 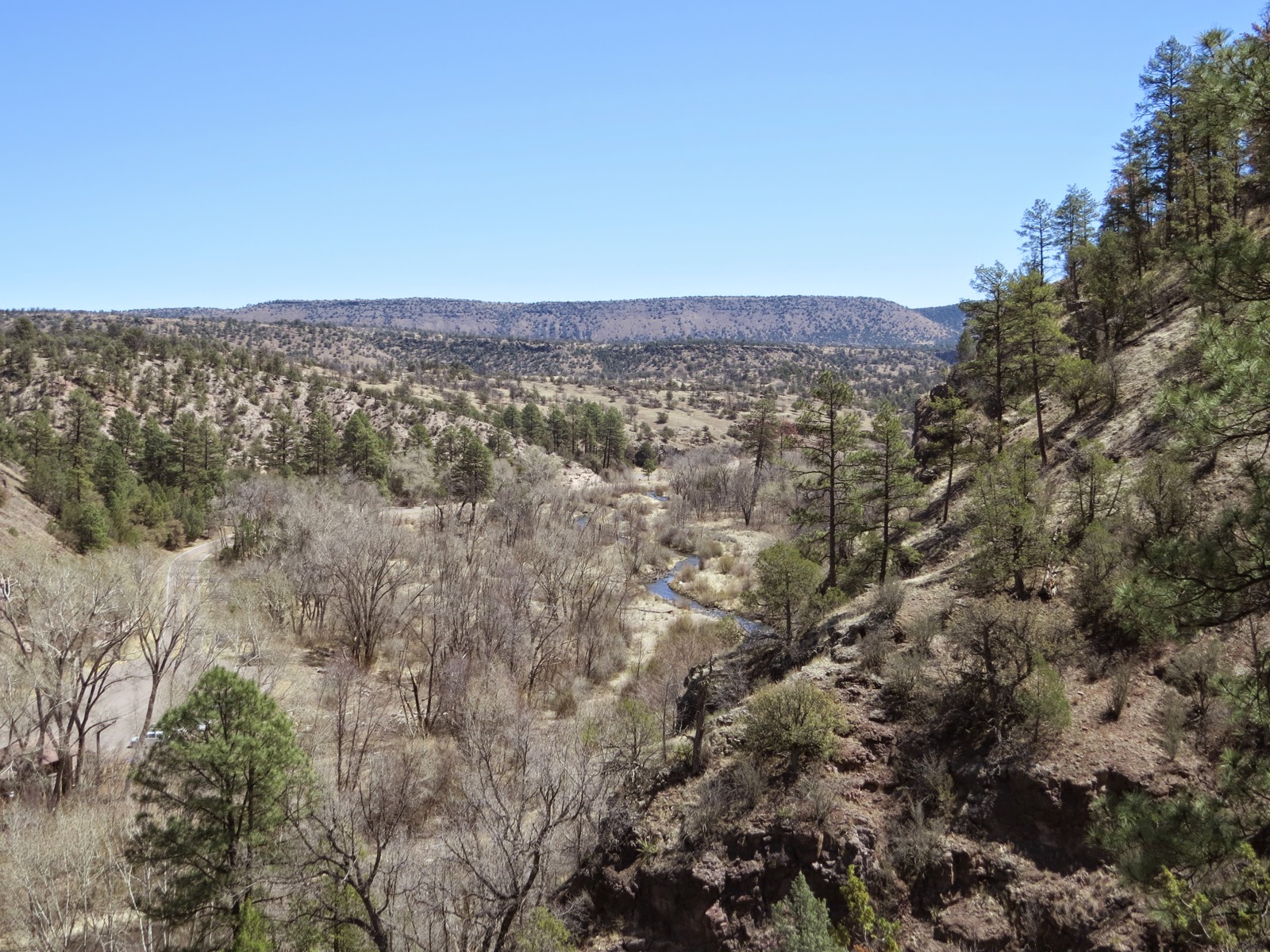 And I think the ‘environmentalists’ in this country that would like to shut down mining of this type altogether are being very short sighted. Our demand for the products of these mines will not diminish so one of the primary results of driving mining out of this country is to increase mining in other countries, often countries where the regulations, oversight and safety measures are not so strict, therefor increasing the potential for real ecological damage.

So, you could raise the argument that the people working in US mines, feeding their families, driving the economy of their communities and adhering to the strict (Compared to many other countries.) regulations we have to minimize the impact of the mining process, may actually be better ecologists that our own home-grown Eco terrorists.

Oops. Some nights I need someone to just come along, take the keyboard away from me, and knock me off my high horse. . .