Today we left Tucson and headed north through Phoenix and on up to Camp Verde.


After finding such convenient accommodations in Tucson I spent quite a bit of time on line and on the phone trying to find something similar up in this area but didn’t have any luck. The few parks/campgrounds I found with rental units wouldn’t rent them out for anything less than a week. So instead I found a campground on one side of I17 and a hotel on the other. 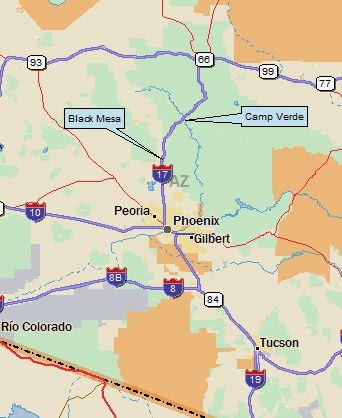 North of Phoenix, as we approached the Black Mesa area, chatter started up on the CB about a wreck in the northbound lanes that had the freeway closed down. Fortunately, right there at the high-point of Black Mesa there’s a rest area; fortunate because there’s not a whole lot of other options right through here.

Going northbound you pass the rest area, which is on the west side of the freeway, then get off and cross back under the freeway and go back up a ramp to the shared north/south bound rest area that looks out over a steep valley with Black Canyon Creek in the bottom of it. The slopes were steep, we were up high and it was very windy! 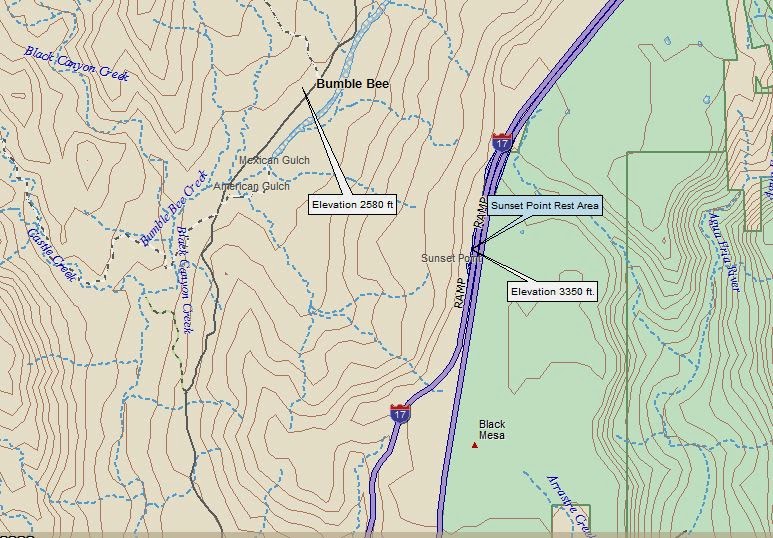 There’s a road down there in the bottom of the valley threading through cool sounding places like American Gulch, Mexican Gulch, Dead Cow Gulch, Tiger Canyon, (You have to wonder how that got its name!) Rattlesnake Canyon (I think you can figure out where that name came from.) and a spot on the map called Bumble Bee with no visible buildings or streets, but after careful examination with the binoculars and much perusing of the map we decided it wasn’t a viable by-bass so just sat still and had a long lunch while waiting for word on the CB that traffic was moving again.


The hotel we booked Mom into is the Cliff Castle Casino Hotel on the tiny Yavapai Apache Indian Reservation on the north side of Camp Verde. You get off the freeway, take the first right off the round-about, then go up the hill, passing under a big sign for the place. As I approached I could see they have valet parking, which I loathe and was not about to use, so I dropped Mom and her bags at the front door and drove on to find my own parking. 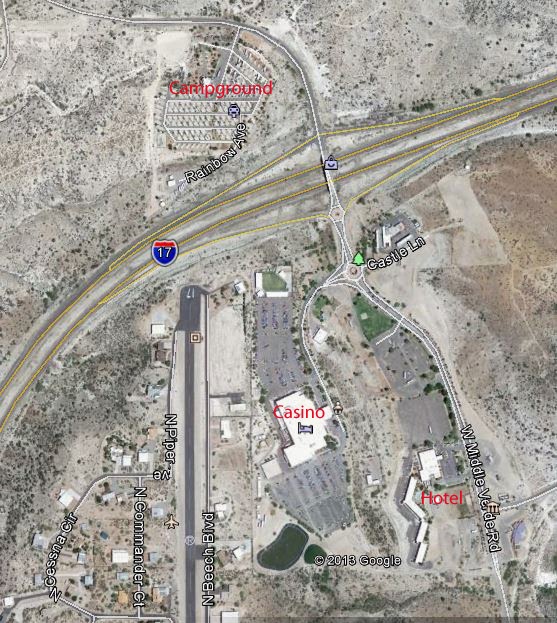 As I was walking towards a side entrance to meet Mom at the front desk, I saw a little old lady tooling around the corner in the distance dragging her suitcase behind like a bag lady. Hey that's Mom! Turns out the Casino Hotel is not at the casino, but rather back down the hill and around to the second right off that round-about.


We finally got that sorted out and once Mom was established in her room I went back across to the west side of the freeway, which is outside the reservation, to the Distant Drums RV park and settled myself into a small back-in site off in one corner. This is a RV resort type campground with very nice facilities and makes a good base camp for what we have planned.
Not as good a setup as we had in Tucson but certainly serviceable.