This morning I fetched Mom from the hotel and brought her back to the campground where we had breakfast and planned the day.
We started out at the Montezuma Castle National Monument which is just north here on the west bank of the Beaver Creek. There’s a pretty good interpretive center explaining some of the history of the area as well as a very easy paved trail below the 800 year old cliff dwellings. We even managed to catch a talk by one of the rangers while out on this trail.
We ambled along and imagined life in these cliff houses stacked one above the other in some places. As a mother at what point do you let your child leave the house, which involves negotiating very narrow ledges above big drops, on their own, ? How long does it take before you stop dreading carrying water or firewood from the valley floor up to the front door? Or does it never stop until the kids are big enough to take over? What was it like coming home in the dark, perhaps slightly tipsy, after a dance or other gathering?
Eventually we decided we were not going to get answers to questions like this unless we lived it ourselves, and that wasn’t going to happen! So we eventually made our way back to the van.
It’s a good thing we got here early! We had a parking spot right near the visitor center but by the time we left, the parking lot was full and vehicles were creeping around playing musical chairs, pouncing on any vacated slot. That should have been a hint but I still don’t know what was so special about today that had so many people out and about. True, it’s a Saturday but I thought we had delayed our trip long enough to miss the worst of the spring-break madness of March.
Anyway, blissfully unaware and having done our quota of hiking for the day we shifted to road-trip mode and headed on up the road to Sedona.
Along the way we stopped at the Red Rock Ranger district visitor center which has another nice museum/interpretive center and spent quite a while strolling the exhibits. They have some big, and I mean BIG, clay pots in there!
Little did we know that nice drive up SR179 was to be the last quiet stretch of road for a while!
The closer we got to Sedona the more time we spent just sitting. The traffic was horrendous! Of course this did give us a chance to inspect all the houses of varying architecture, some little and some obscenely big, and businesses along here, though we weren’t tempted enough to stop – any more than we were already stopped that is.
Finally working our way through the heart of Sedona one car-length at a time, we shifted over to SR89A and continued north through Oak Creek Canyon. The road here clings to the canyon wall above Oak Creek and though there’s not actually a lot of road in some places it seemed like any little patch alongside it, big enough or not, was under a car, many of which didn’t quite get all the way off the road before stopping. It was very pretty through here but the place was crawling!
Where there weren’t cars, parked or trying to move along, there were people on foot. I say people but the truth is they were mostly, by far mostly, kids, I assume college students with a smattering of high school wanabees, looking for a place where they could scrabble down the canyon side and claim their butt-sized patch of the already very crowded Oak Creek.
The whole Sedona area has lots of trails and ruins and forest roads and is in a national forest large enough to have three separate districts and looks like it would be a great place to spend some time exploring, but not today.
Today we stuck to driving. We drove to the head end of Oak Creek Canyon where the road negotiates 6 switchbacks as it climbs up to the mesa above the canyon. There’s a rest area/arts & crafts market/overlook up there. We walked to the end of the path and looked down on where we had been, turned around and watched some climbers working a cliff just to our northeast, and did some shopping at the many booths set up along the way. It was a pleasant break.
Not wanting to run the gauntlet of the canyon again we continued north on SR89A. It was, by comparison, a very relaxed drive through some great forest scenery. Not all that far south of Flagstaff we picked up I17 and headed south towards our respective temporary homes again.
﻿
By the time we ate dinner light was fading and I took Mom back to her room where I promptly broke her!
As she stepped out of the van and headed towards her ground floor room a curb jumped up in the way and she went sprawling. The sound was awful, a bump, cry, scrabble, thud. 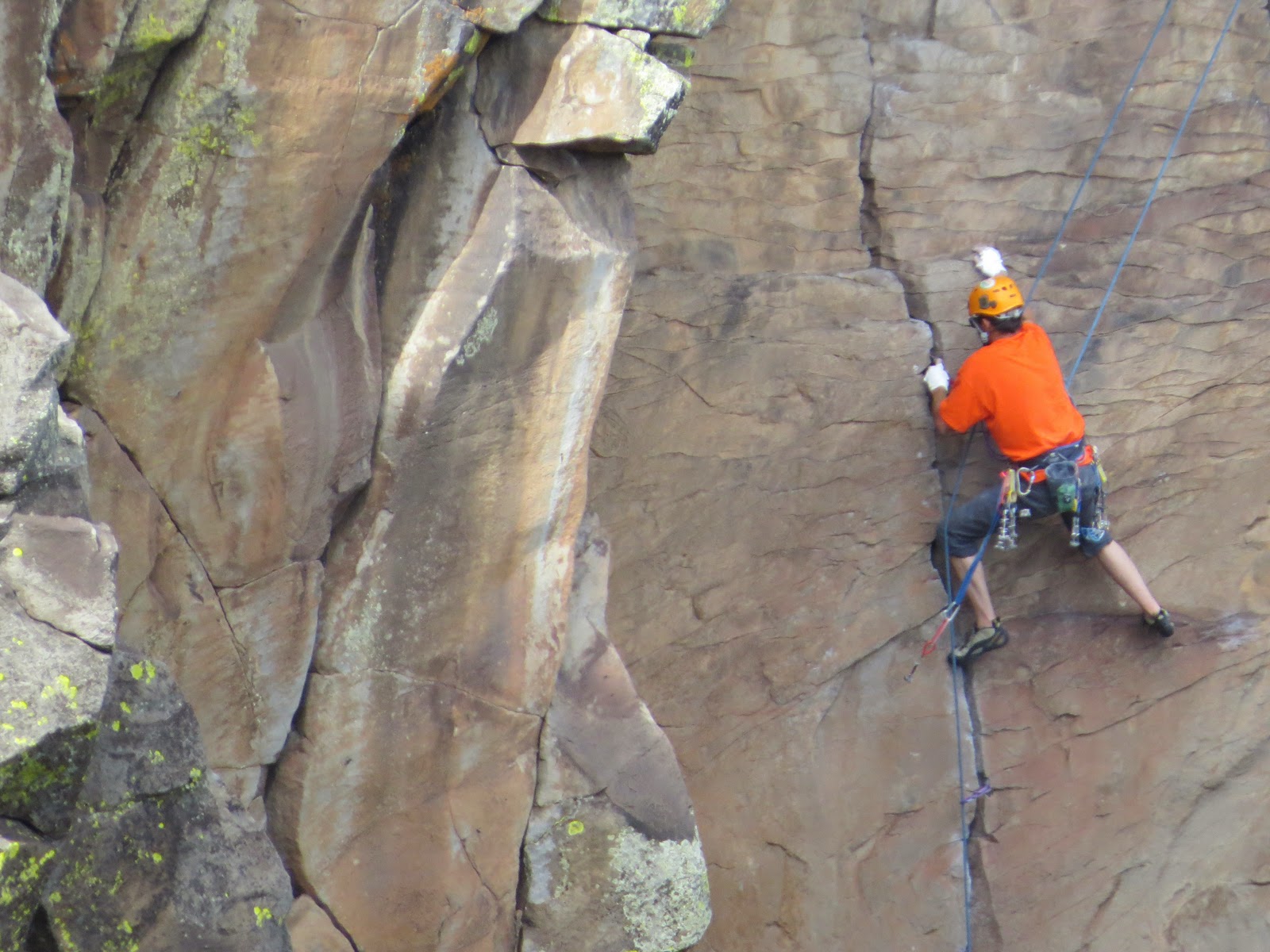 Oh crap oh crap oh crap!! My sister is going to kill me! As this trip approached she made it emphatically clear, on several occasions, that I was to take good care of Mom on this trip, and there were some thinly veiled threats about the consequences of not doing so. Now look what’s happened!
Mom is now settled in her room with her knee iced down and a full ice bucket within reach, and I’m sitting here in my campsite freaking out! I might have to move and not tell anyone, especially my sister, what my new address is!