We interrupt out regularly scheduled programming for this special bulletin.

What a glorious day!! 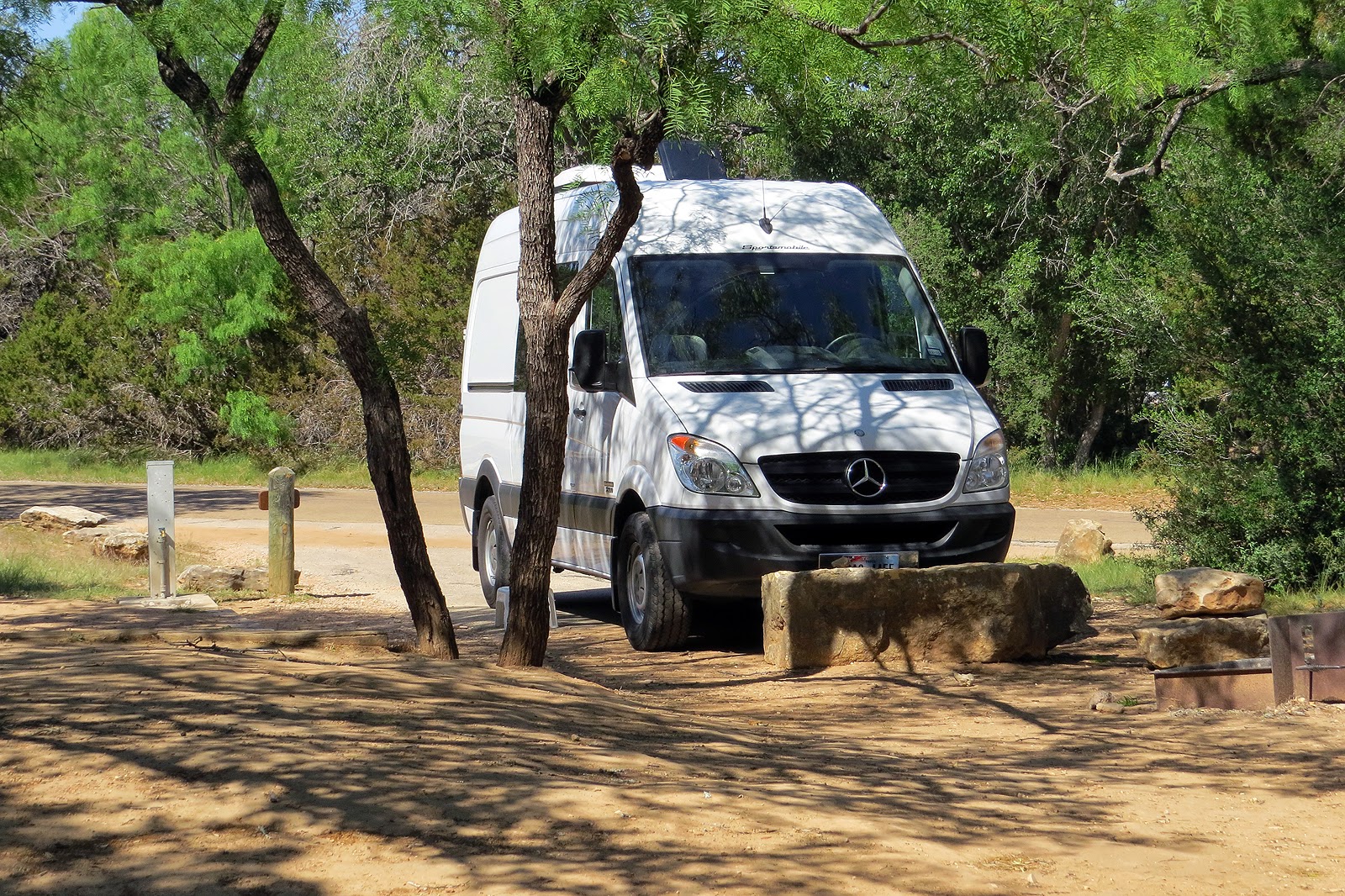 Which is why I'm back at Pedernales State Park tonight. It got up to the 70's today and is heading for the low 40's tonight. The forecast for the next several days is for more of the same and this could very well be the last really comfortable camping weather around here until fall.

Since I can, I took off this morning to take advantage of the opportunity. 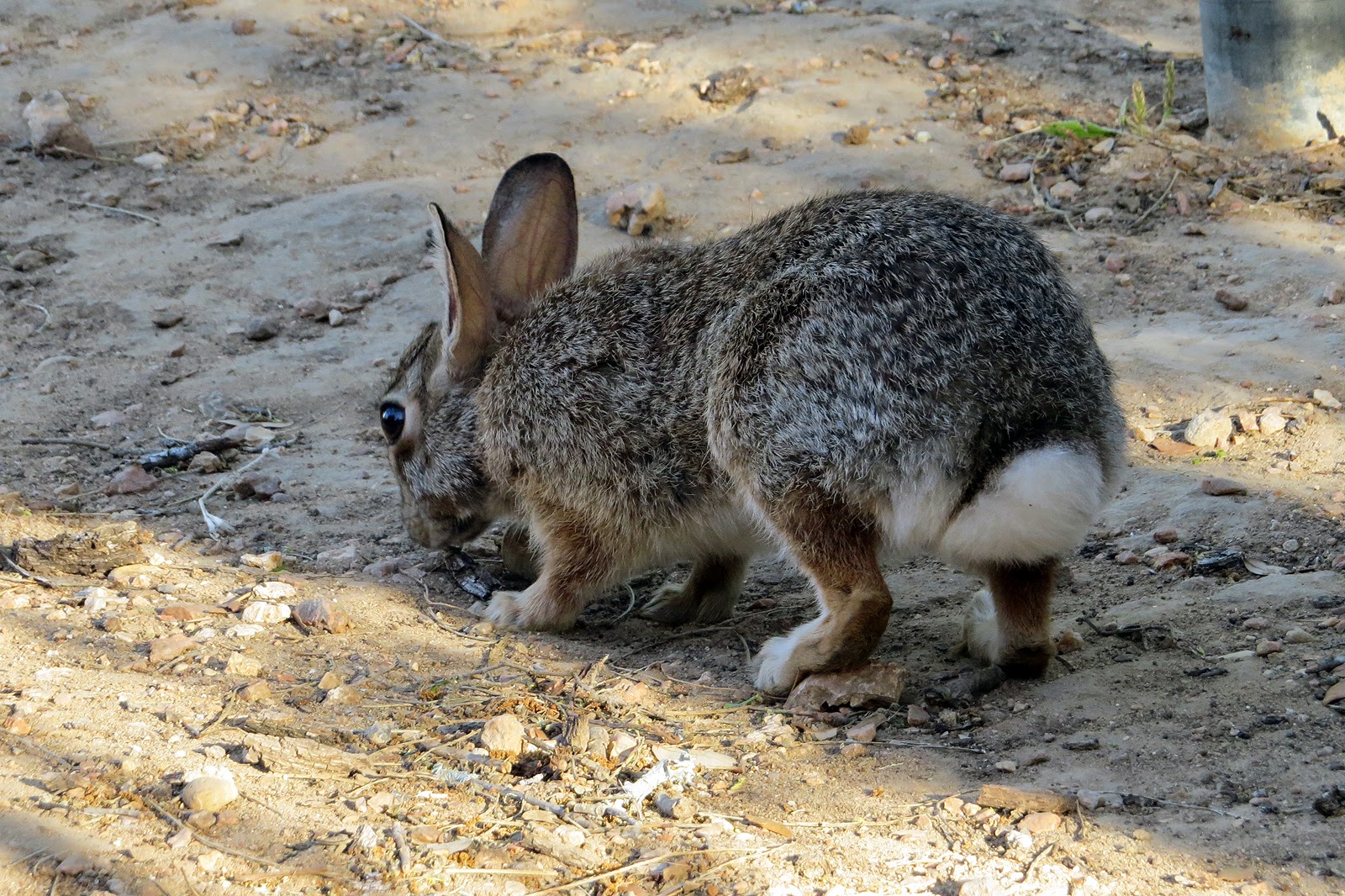 I left the van sitting in the campsite this morning and headed out with my pack on my back. After some serious bushwhacking up a ridgeline to the west I intersected a horse trail I knew was up there and turned north to follow it towards that end of the park. It seems a bit early for school to be out but for a Tuesday night the campground had quite a few 'family units' in it last night and I like the equestrian trails at times like these because people on foot seem to avoid them and there really are few if any riders out on weekdays. 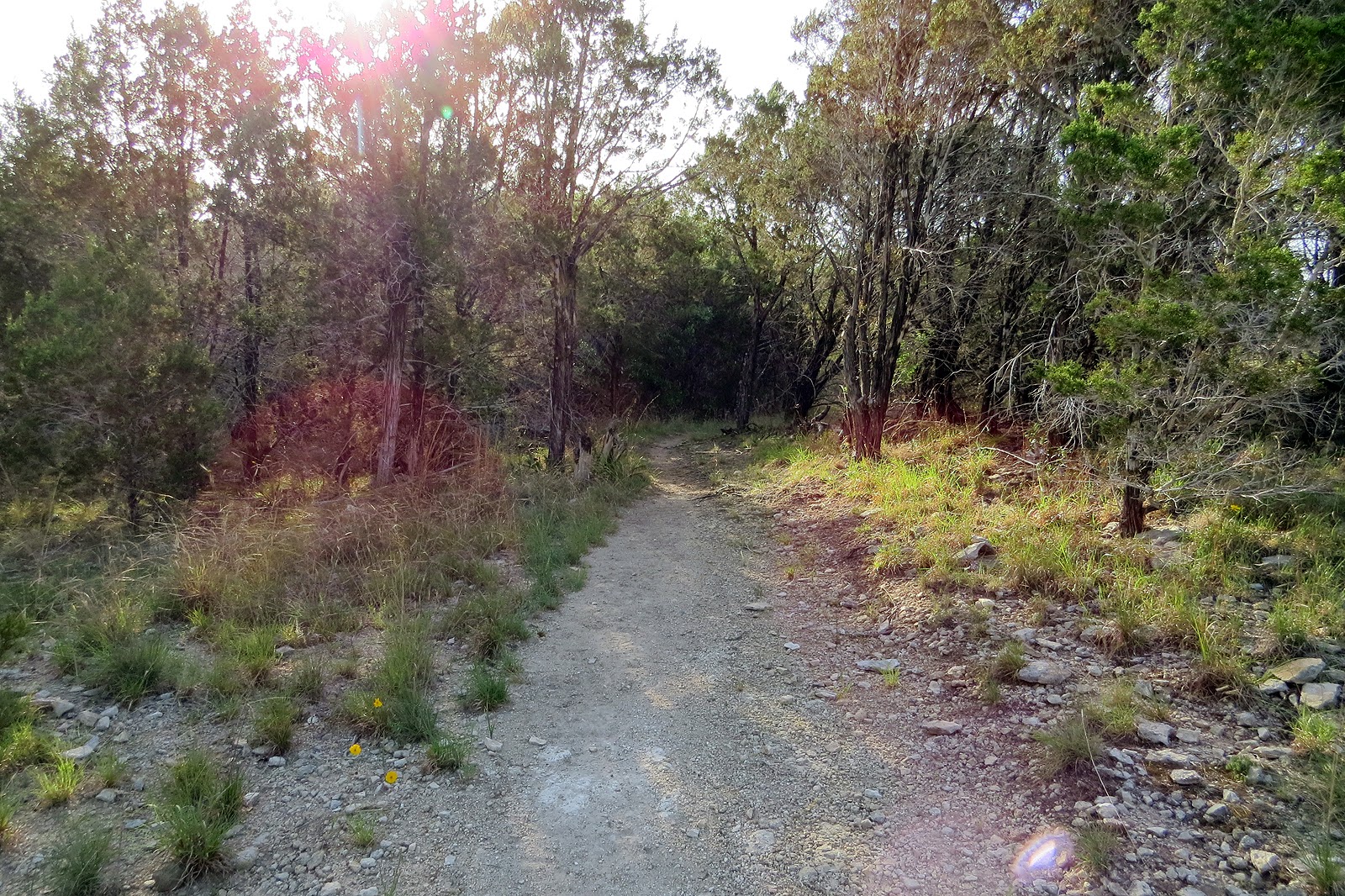 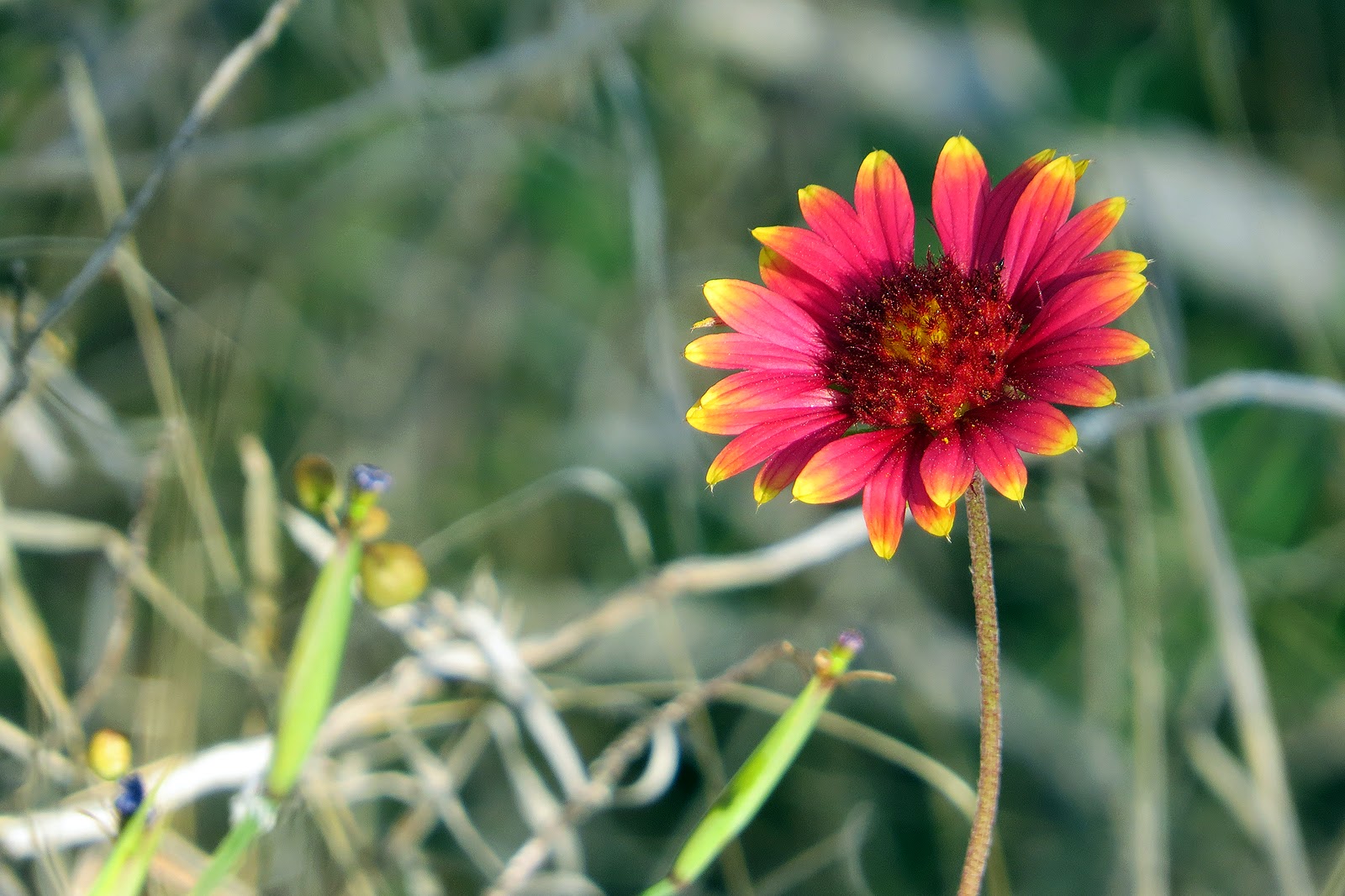 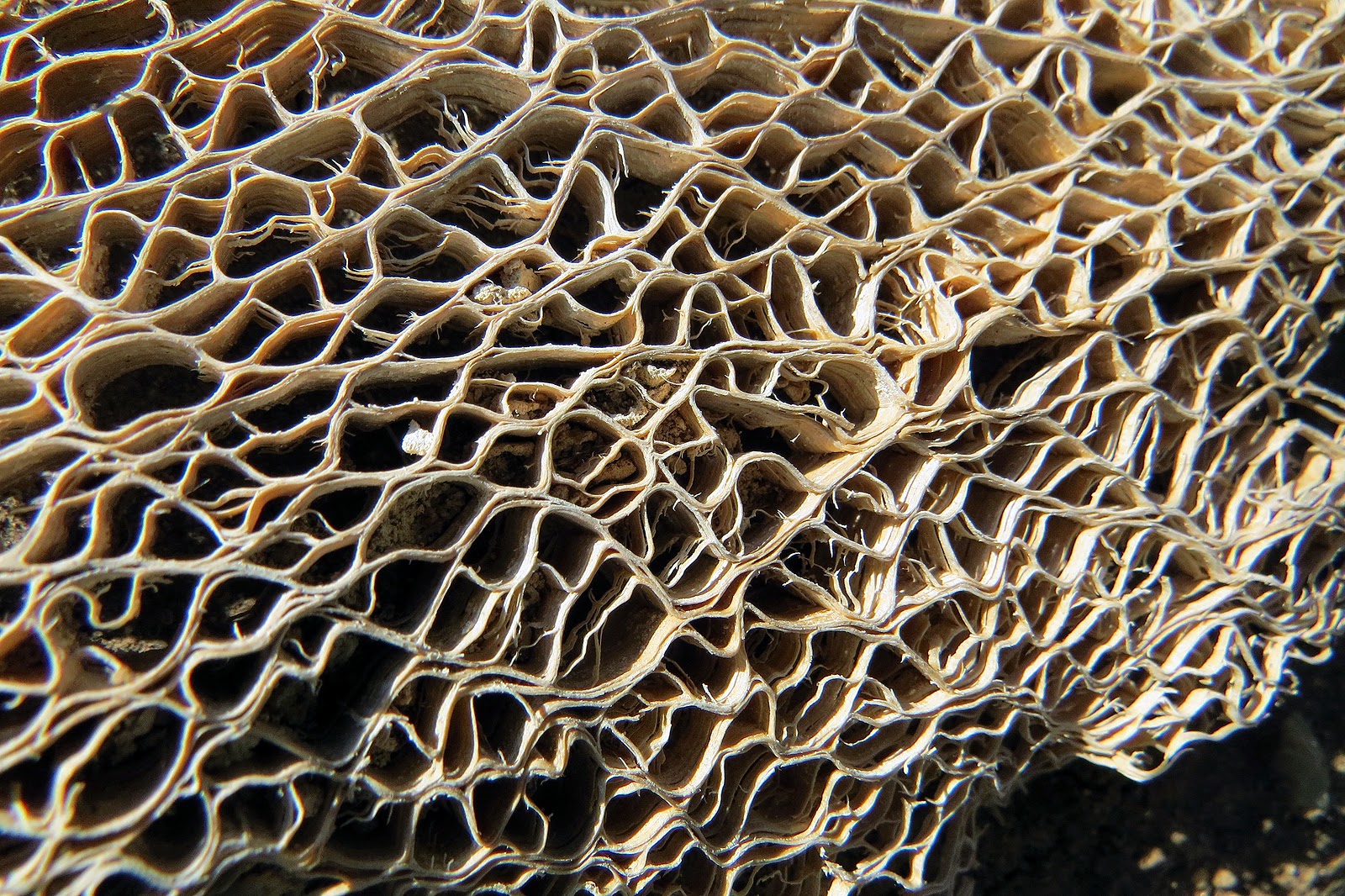 This is what's left when all the soft parts of a prickly pear pad
decay away. Pretty cool isn't it? I can just imagine shrinking
down and playing 'fort' in this maze! 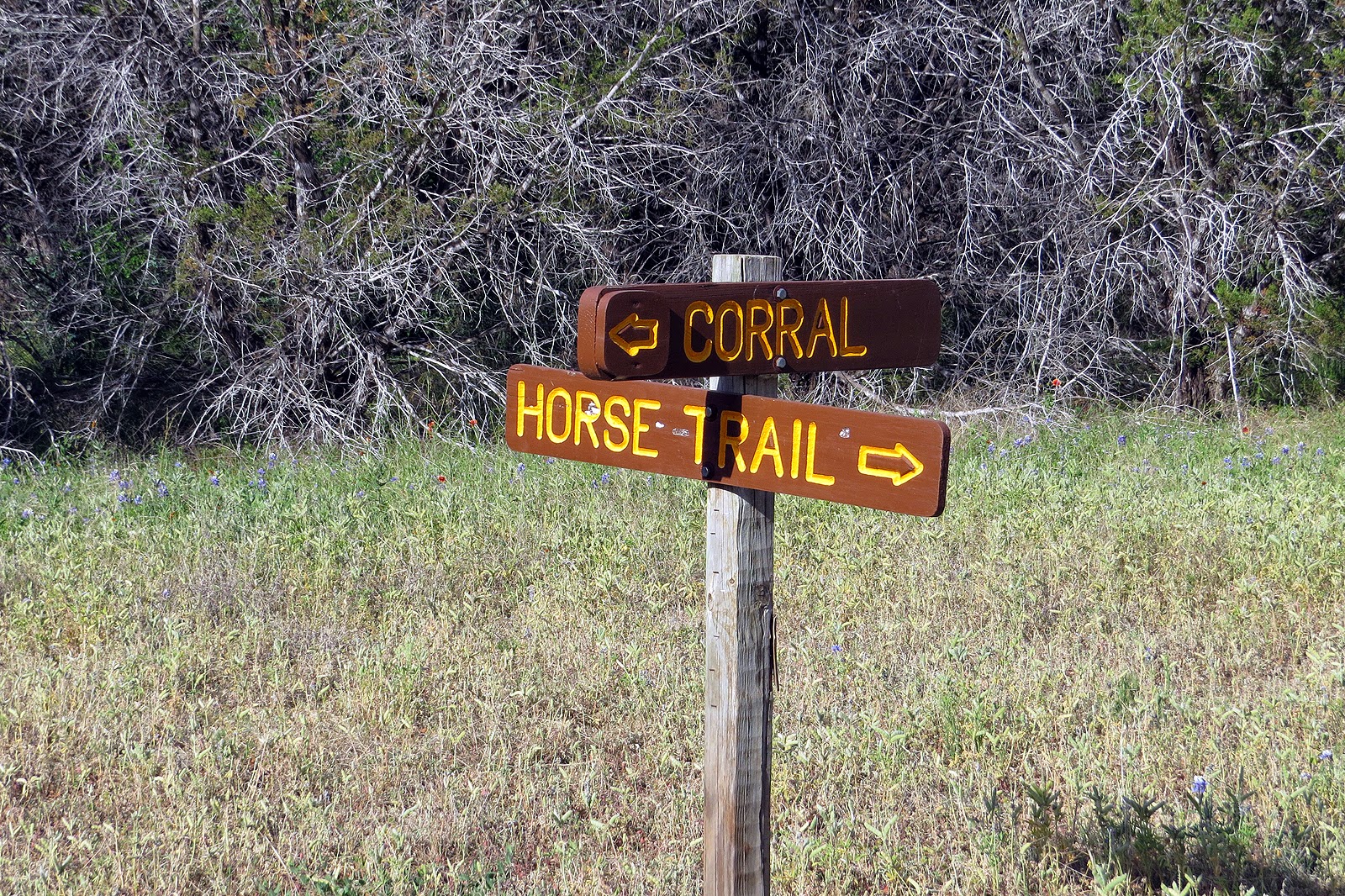 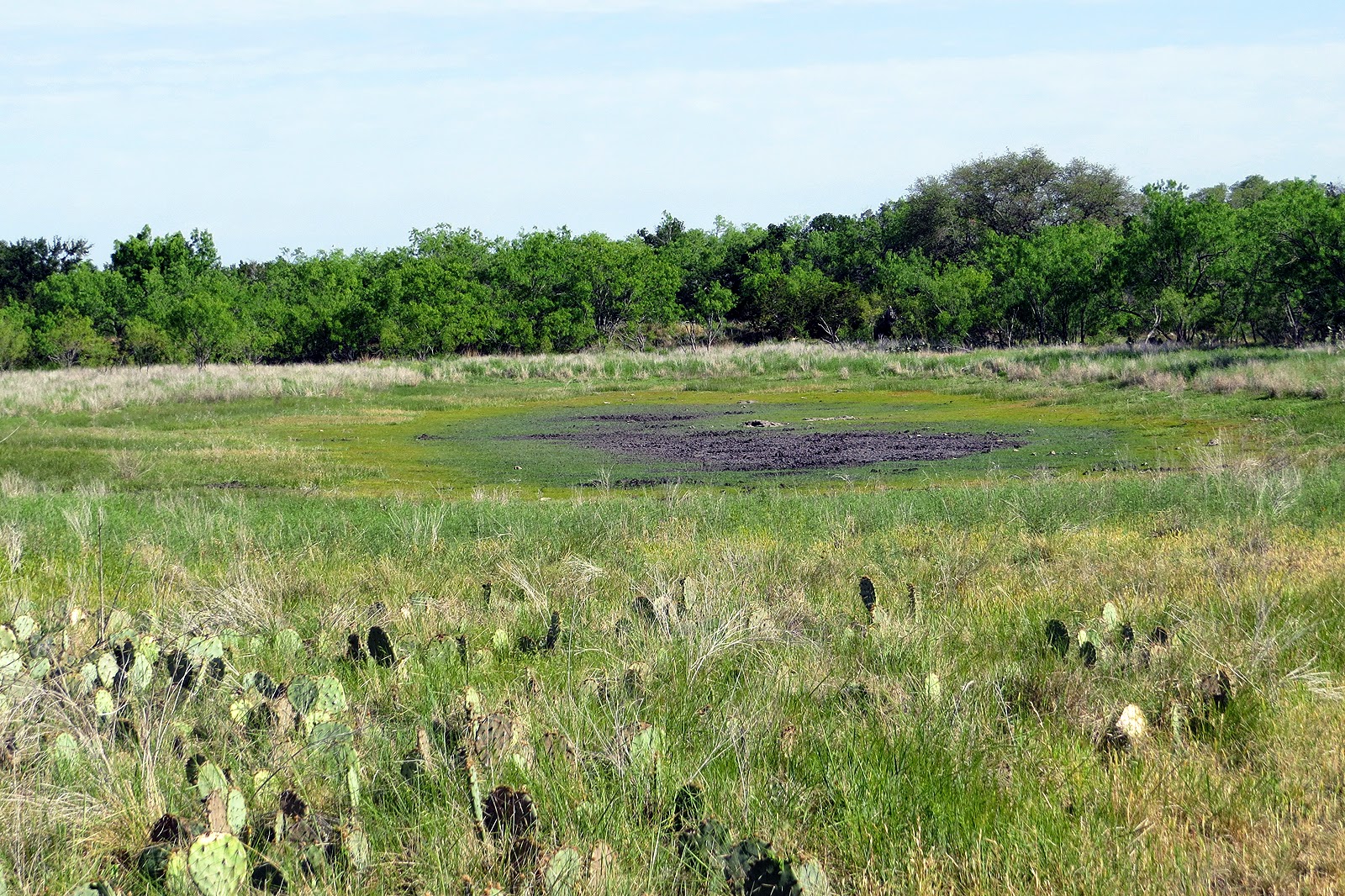 The owners of the ranch that became the state park built this pond in the mid 1900's, called the duck pond, to create habitat for migrating waterfowl. On my way there I had in mind sitting around and doing some bird watching of my own, but when I got there this didn't look too promising. Of course the area has a drought classification of extreme right now so it wasn't all that surprising to find the pond in this condition. 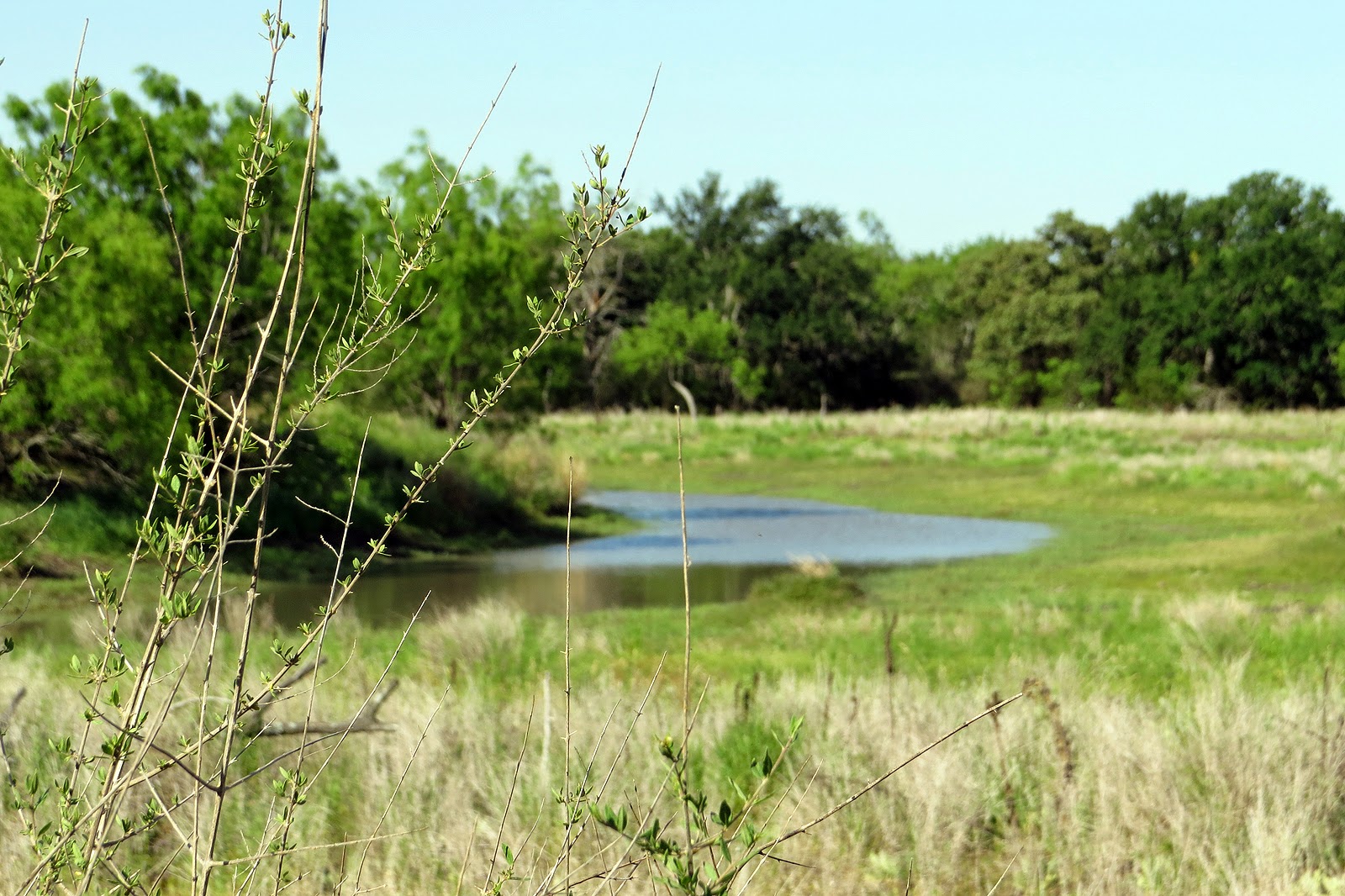 But I hiked on around the corner and found this little surprise at the base of the dike that forms the pond. When I first stumbled on it there was a turkey at the edge of the water but he took off running then flew on over the trees before I could get my camera on him. This shot here, which I really like with the foreground in sharp focus and the pond and trees in the background fuzzy, (Photographers like to call that soft focus but it's still fuzzy.) was supposed to have a purple finch sitting on the spindly plant in the left foreground, but he pulled his cloak of invisibility on (OK, maybe he just flew away.) just as I clicked the shot. 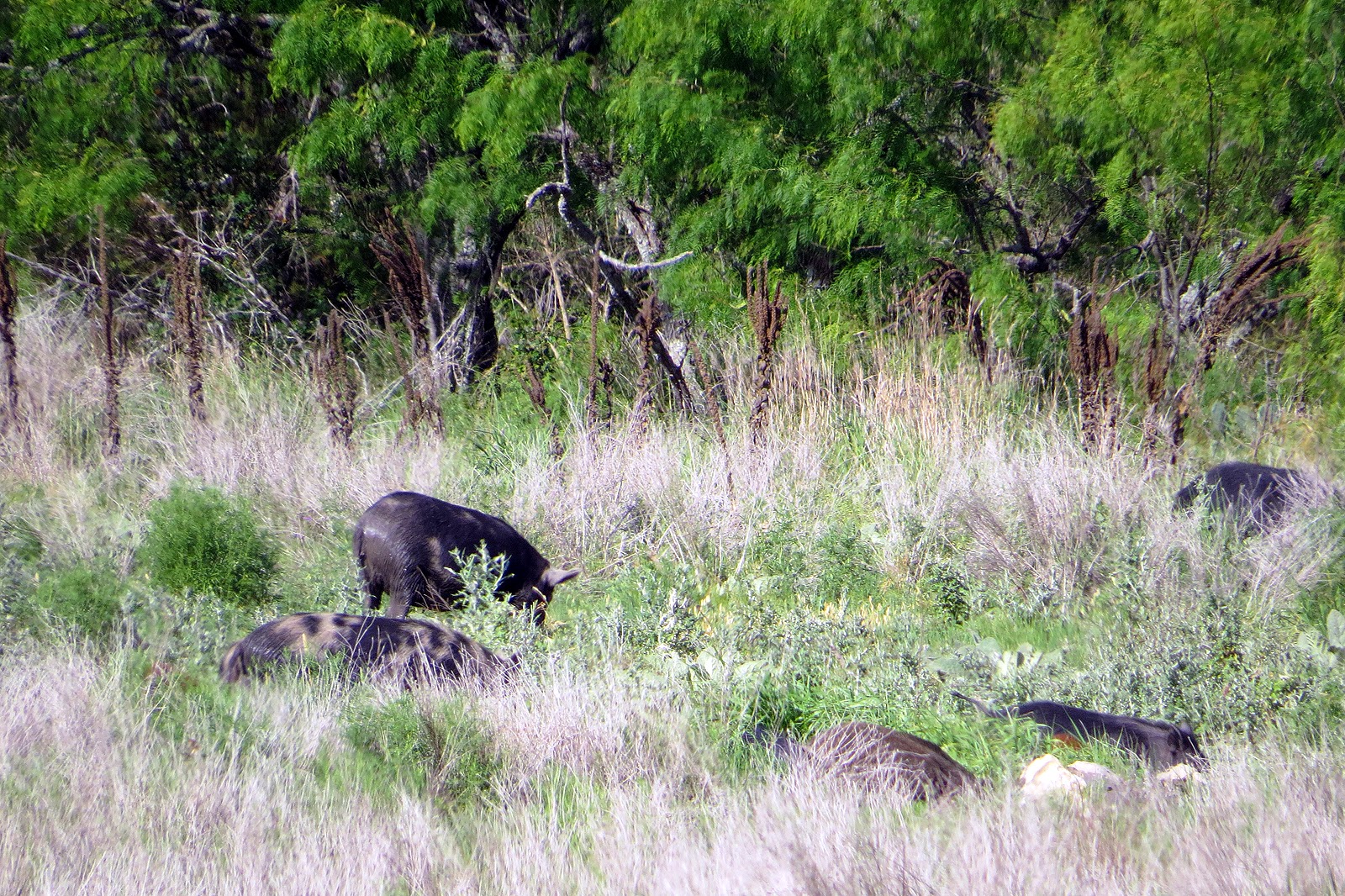 But this little gem of a spot wasn't done with my yet! Soon I spotted a herd of feral hogs wandering into the area as they fed. It's very unusual to see these creatures out in full daylight like this! Fortunately they stayed towards the far side of the little meadow there in front of me as these things can put the hurt on a person! I couldn't spot any boars, which isn't unusual as the females usually want a man around the house only for as long as it takes to - well - you know, then they kick him to the curb again. It's difficult to see them because of the height of the grasses, but there was a whole mess of brown little ones mixed in there with the bigger ones. 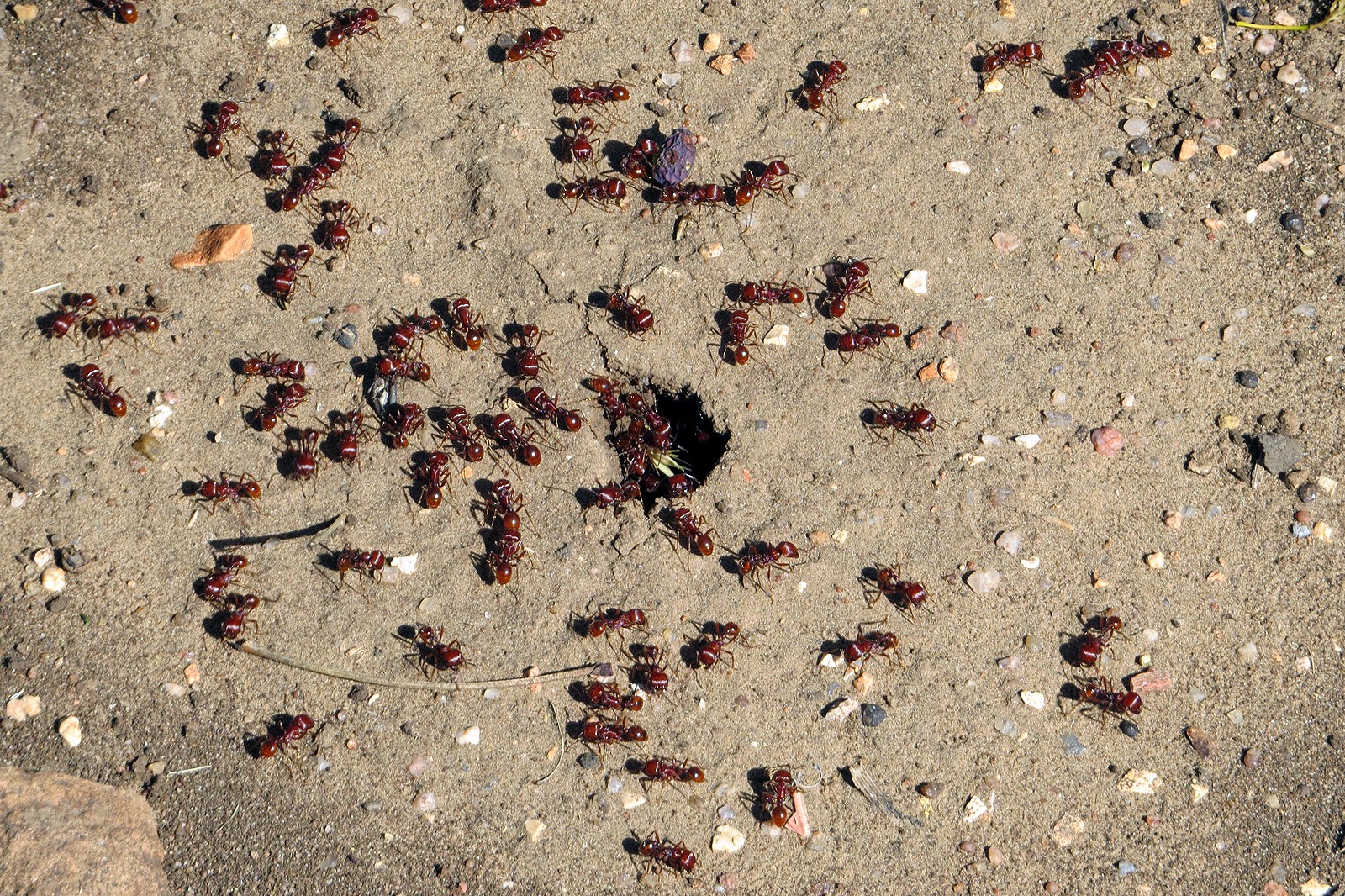 I don't know if these big ants, about a quarter inch long, create circular hard-pan areas with their activity, and boy are they active, or if they are drawn to places like this that already exist, but I saw quite a number of colonies during my hike. 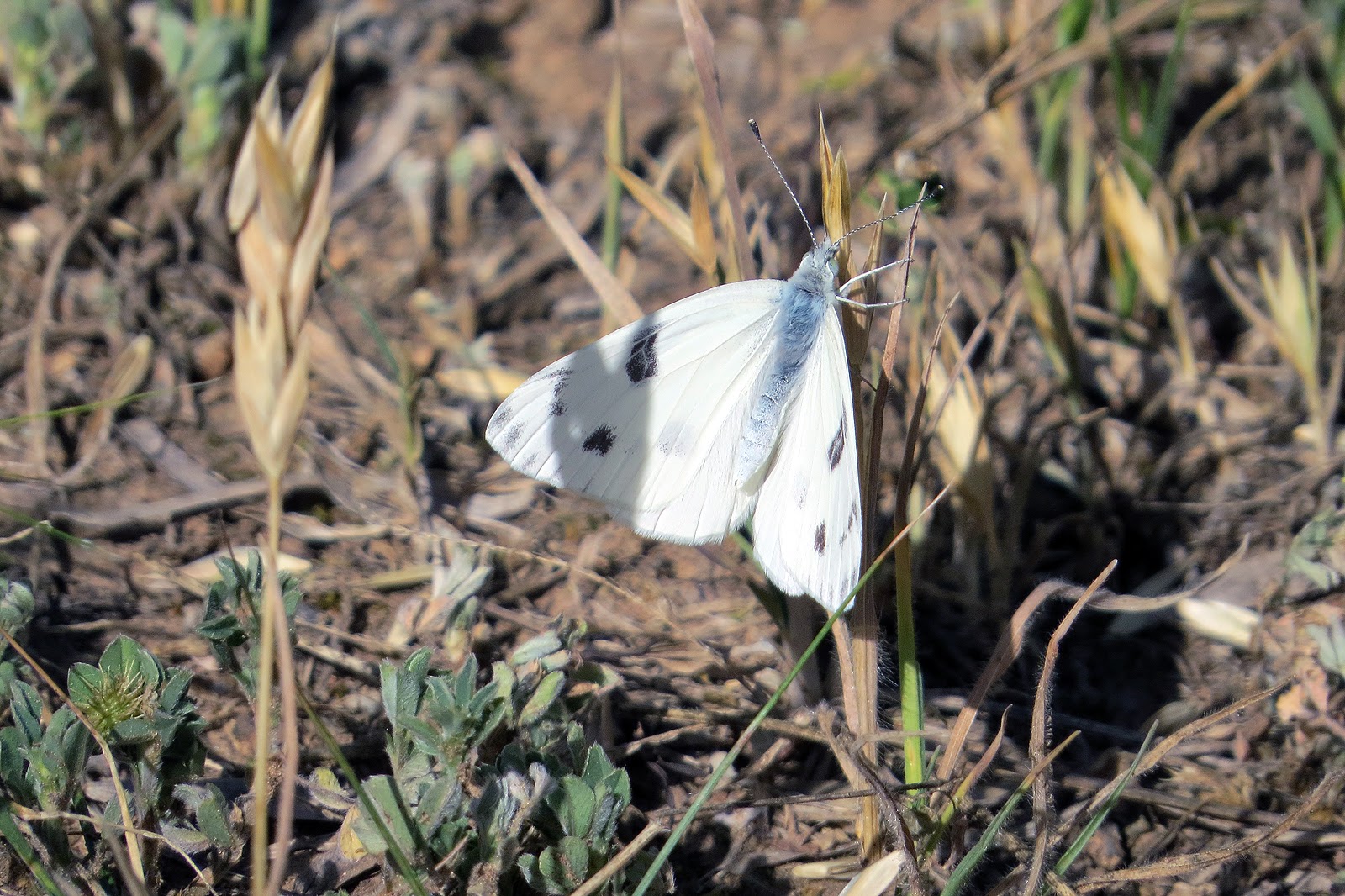 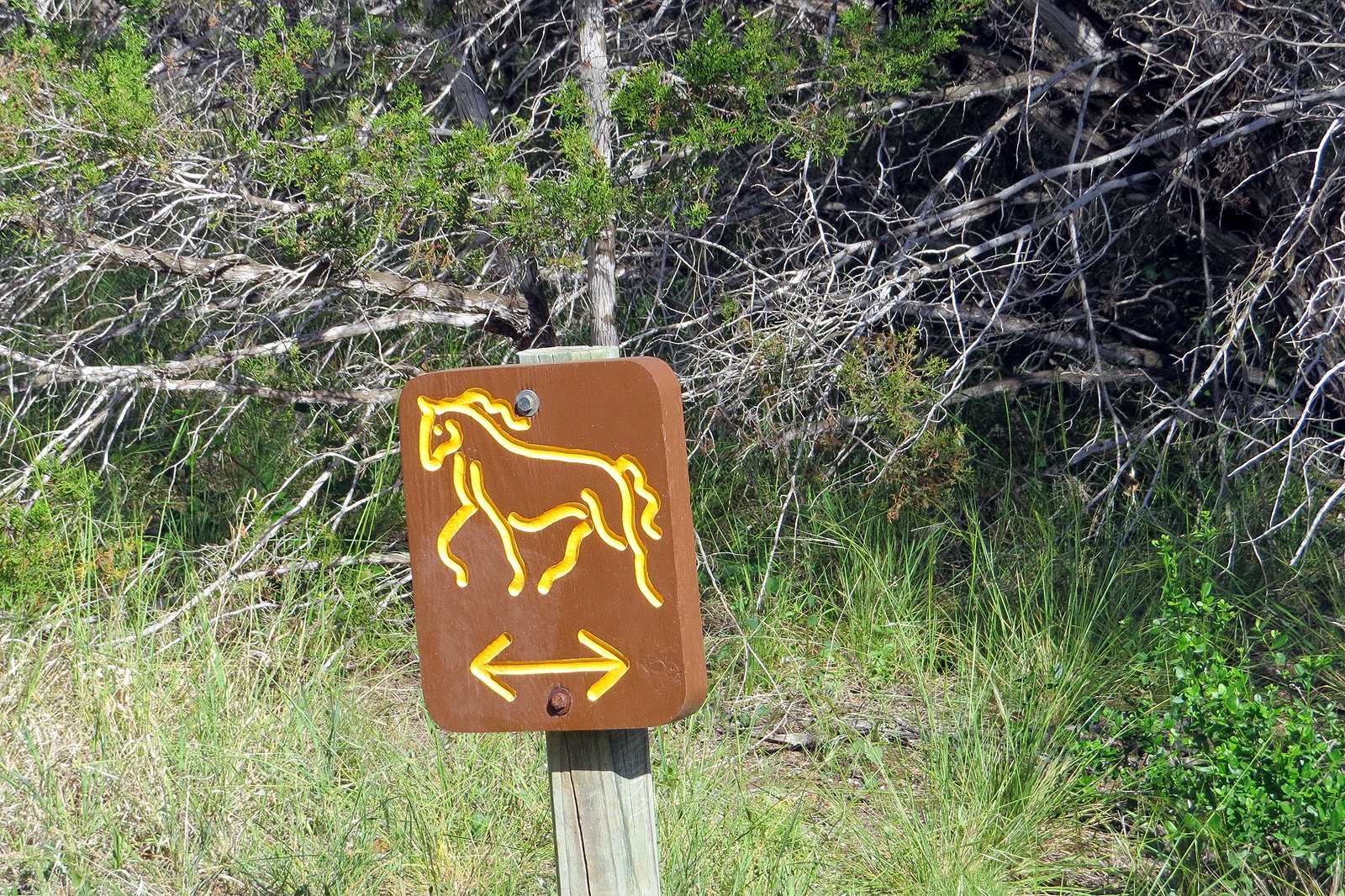 This was as close as I came to seeing a horse all day. 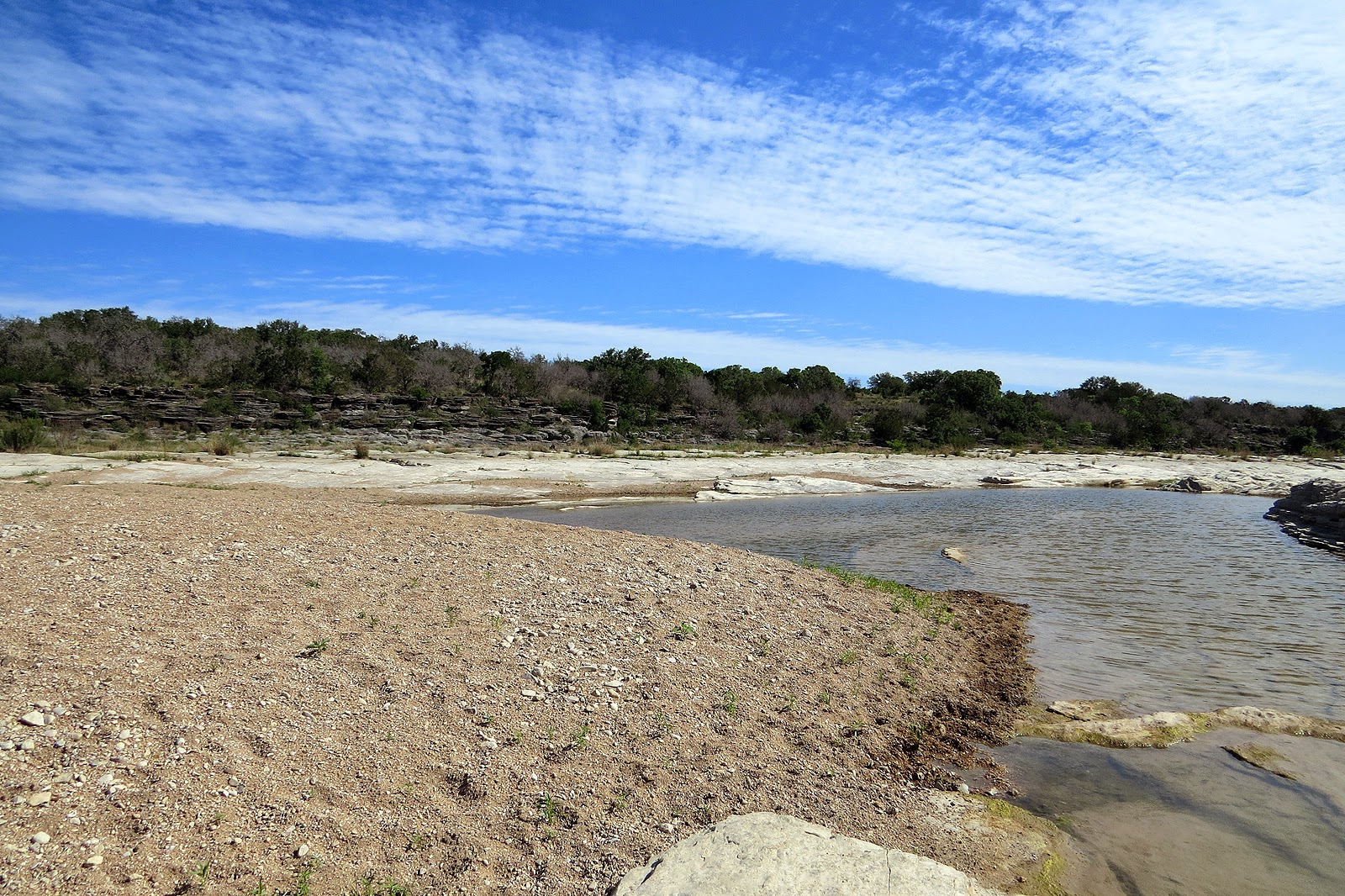 The northern limits of the park are defined by the Pedernales River and I eventually ran into it, but don't let the photos fool you, it was quite a climb to get down this close to the river! 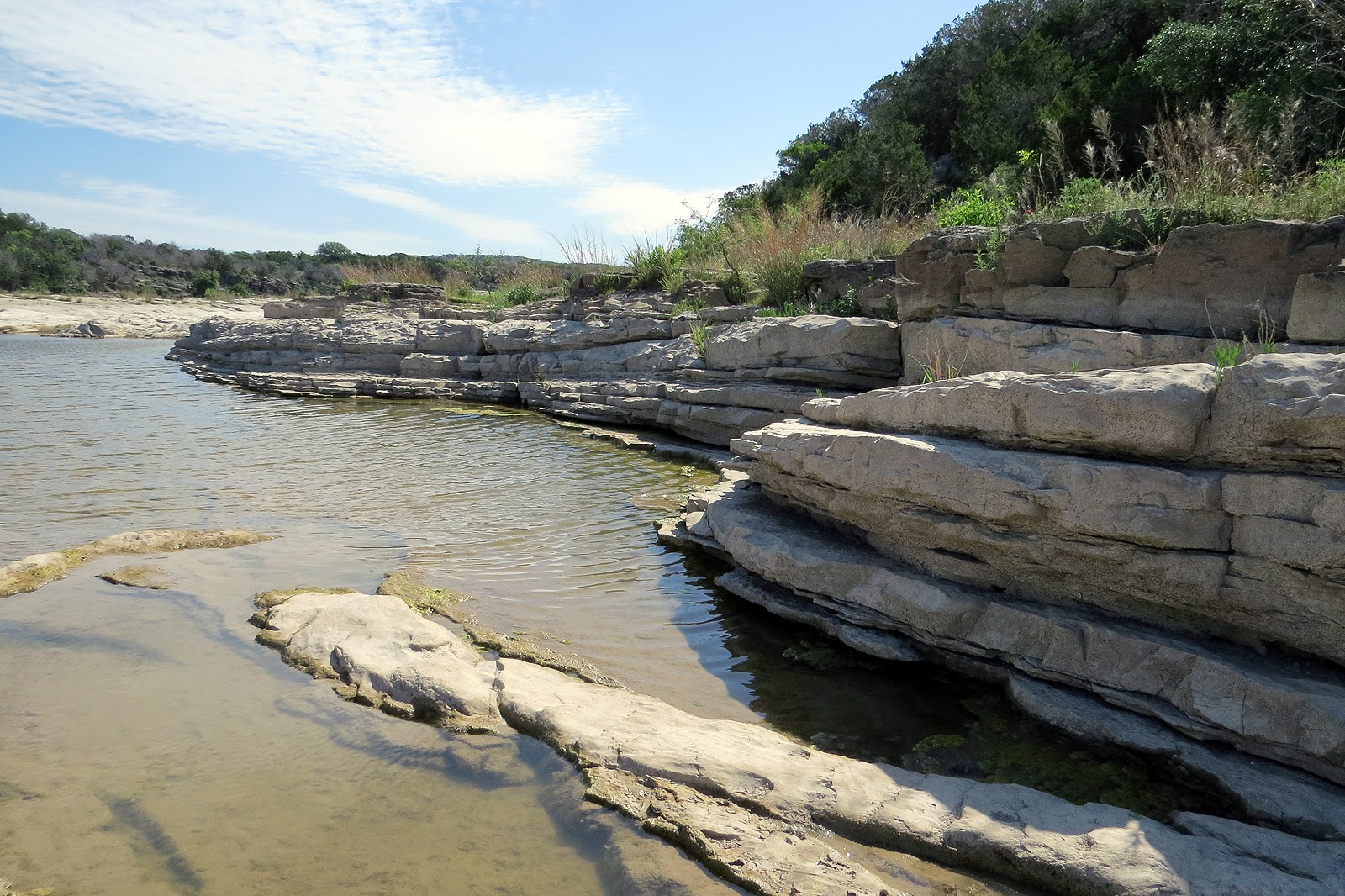 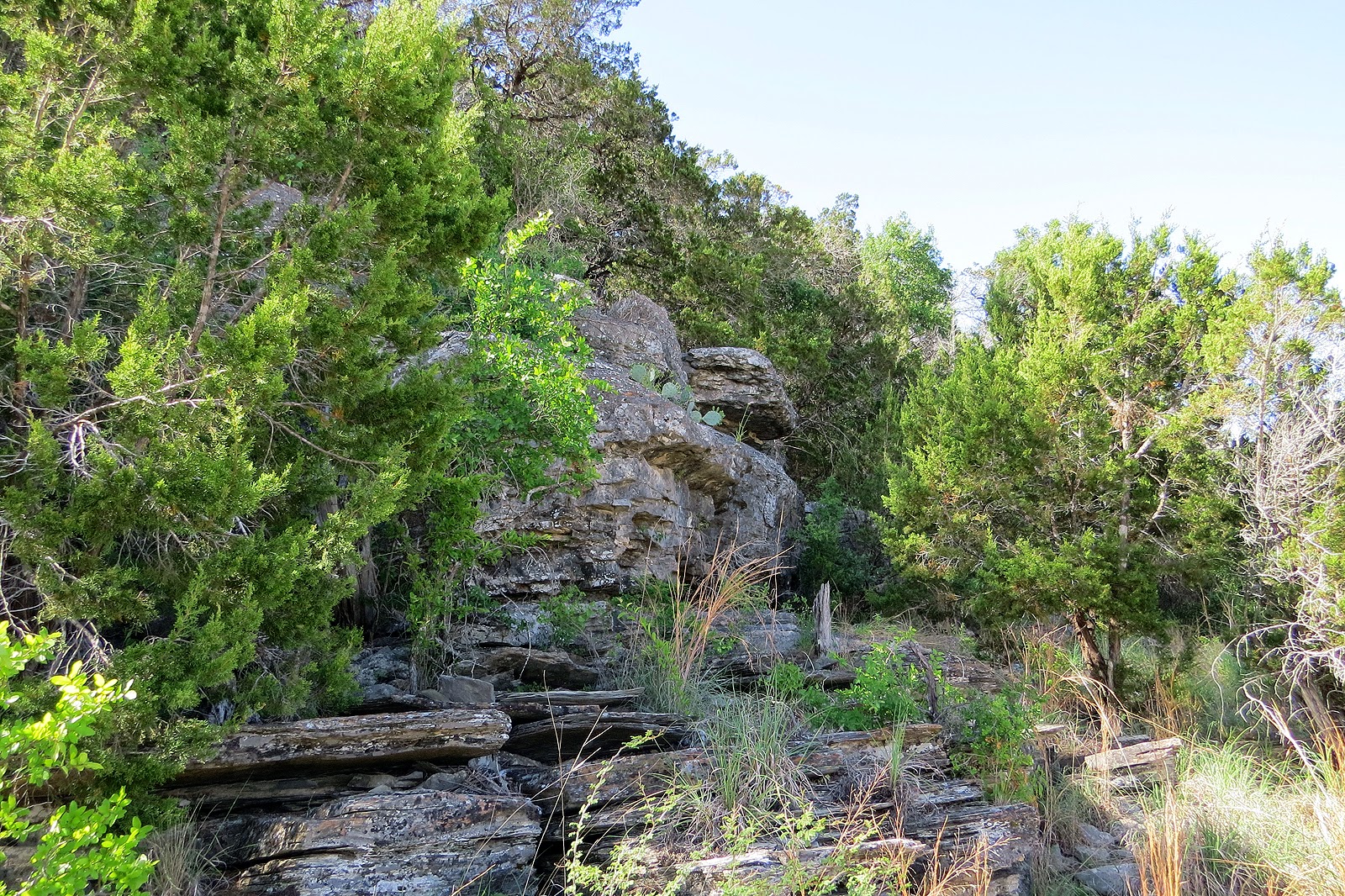 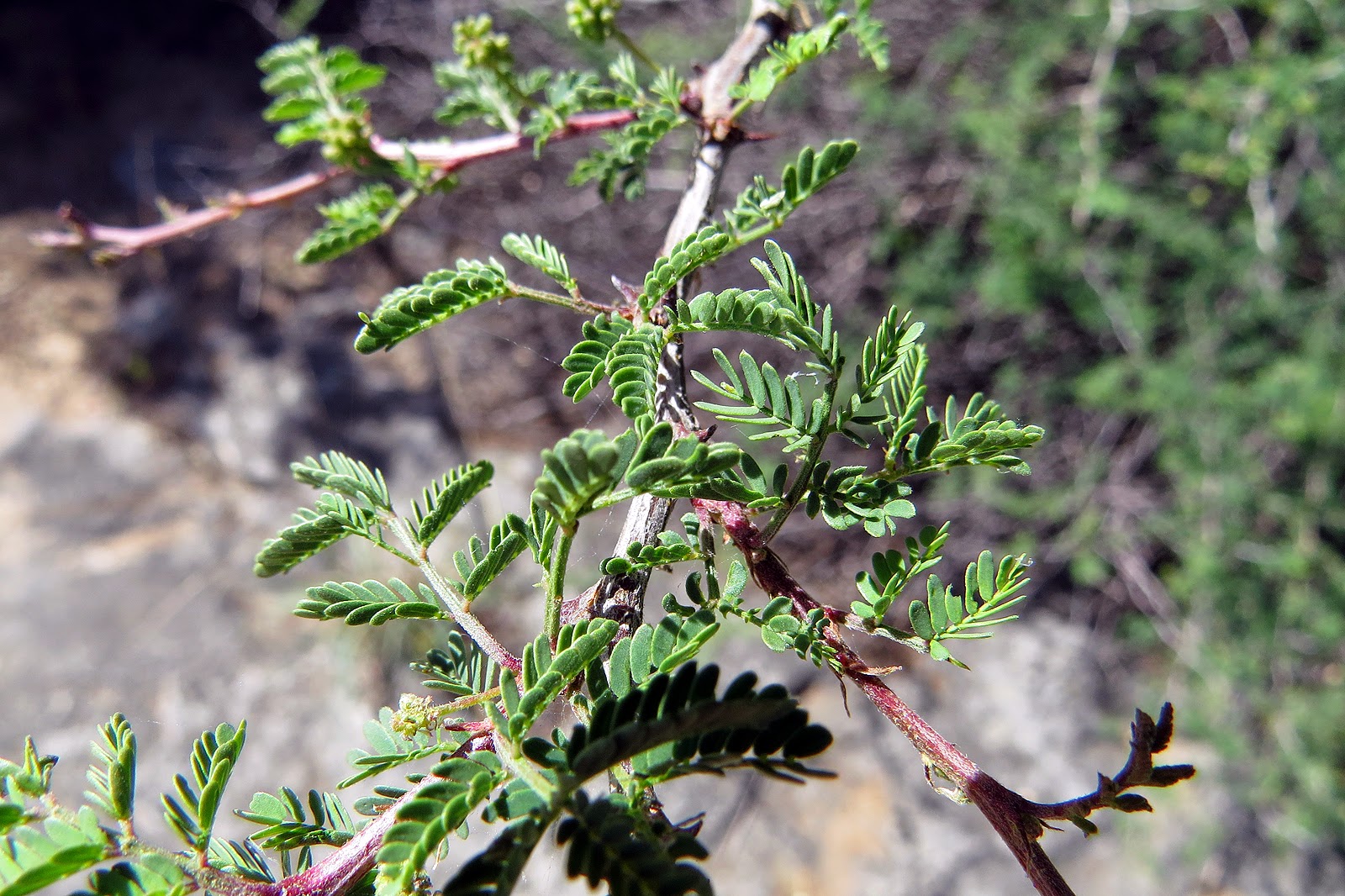 And on the way down you have to do battle with these little guys. They look so sweet and delicate with their tiny quarter-inch leaves. 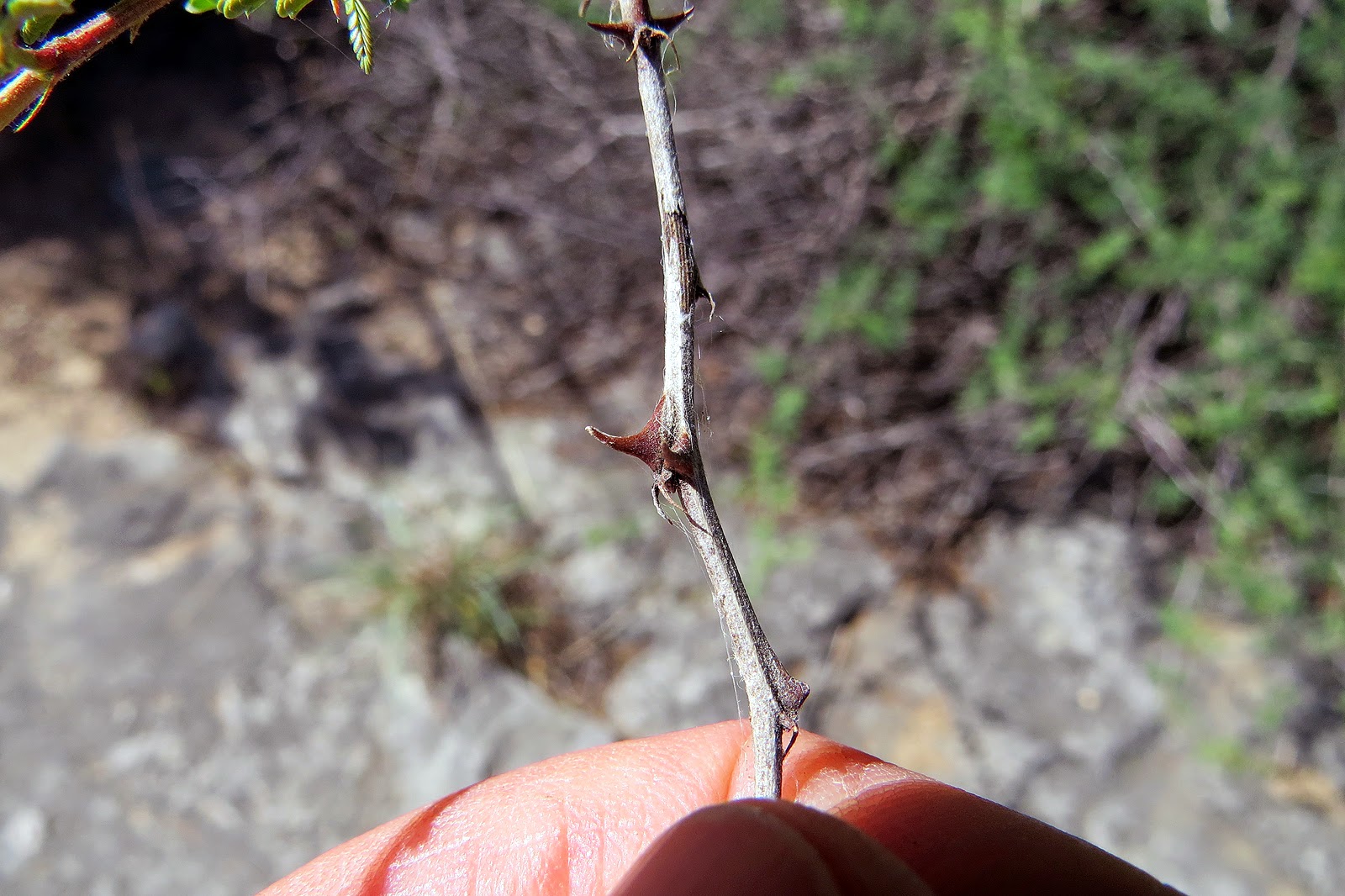 But like so many things out here they have their dark side too. And it's always the dark side that gets you! 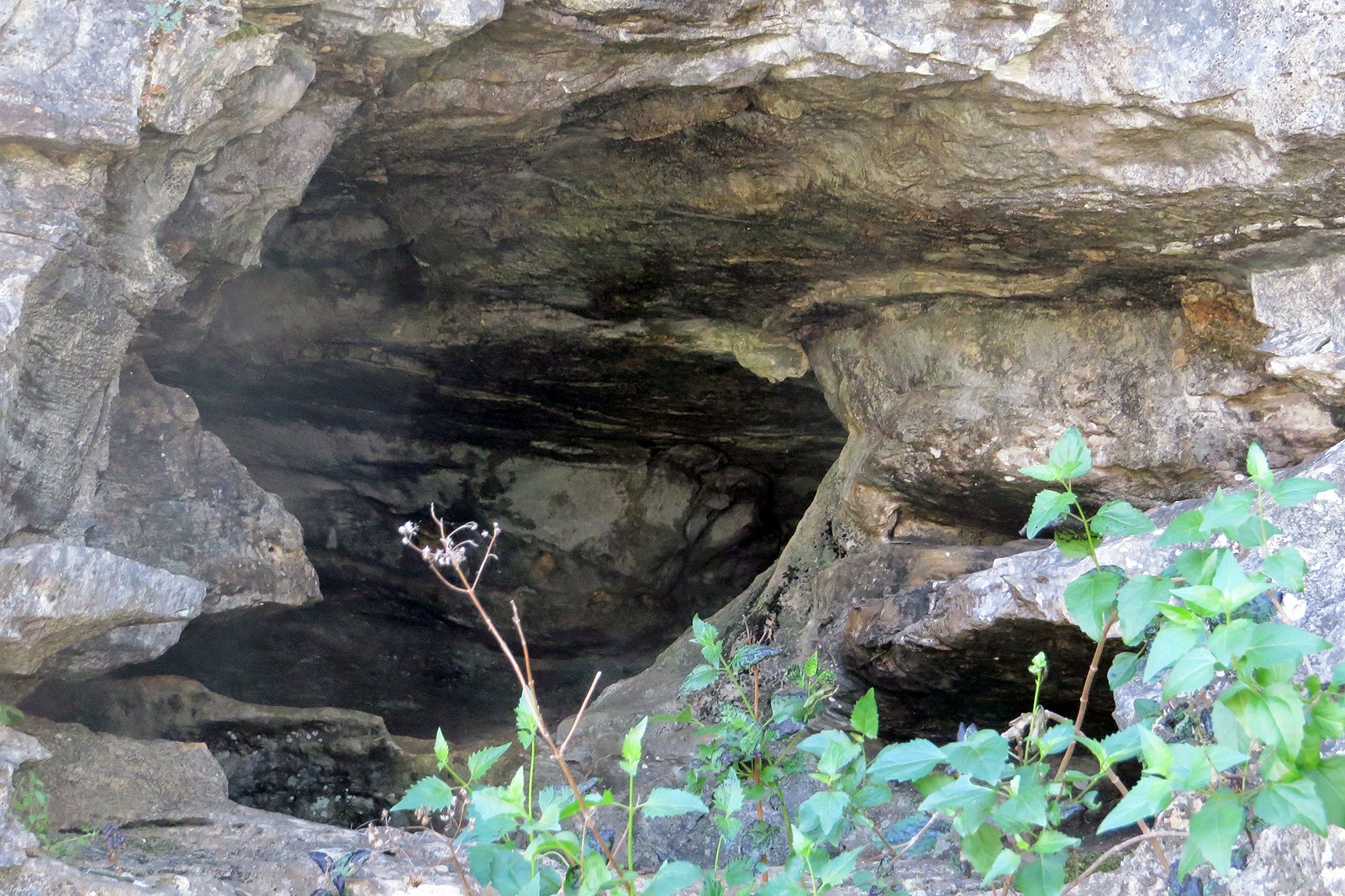 Over time the flood waters of the river (Seems kind of surreal to think about floods in this currently parched landscape but I personally witnessed one of these floods many years ago and it was impressive to say the least!) have carved the occasional cave into the limestone. As I came up on this one I caught a glimpse of a bird that flew inside. Thinking there might be a nest in there I sat down with my camera (On a not too comfortable rock I might add.) and waited, and waited, and waited. 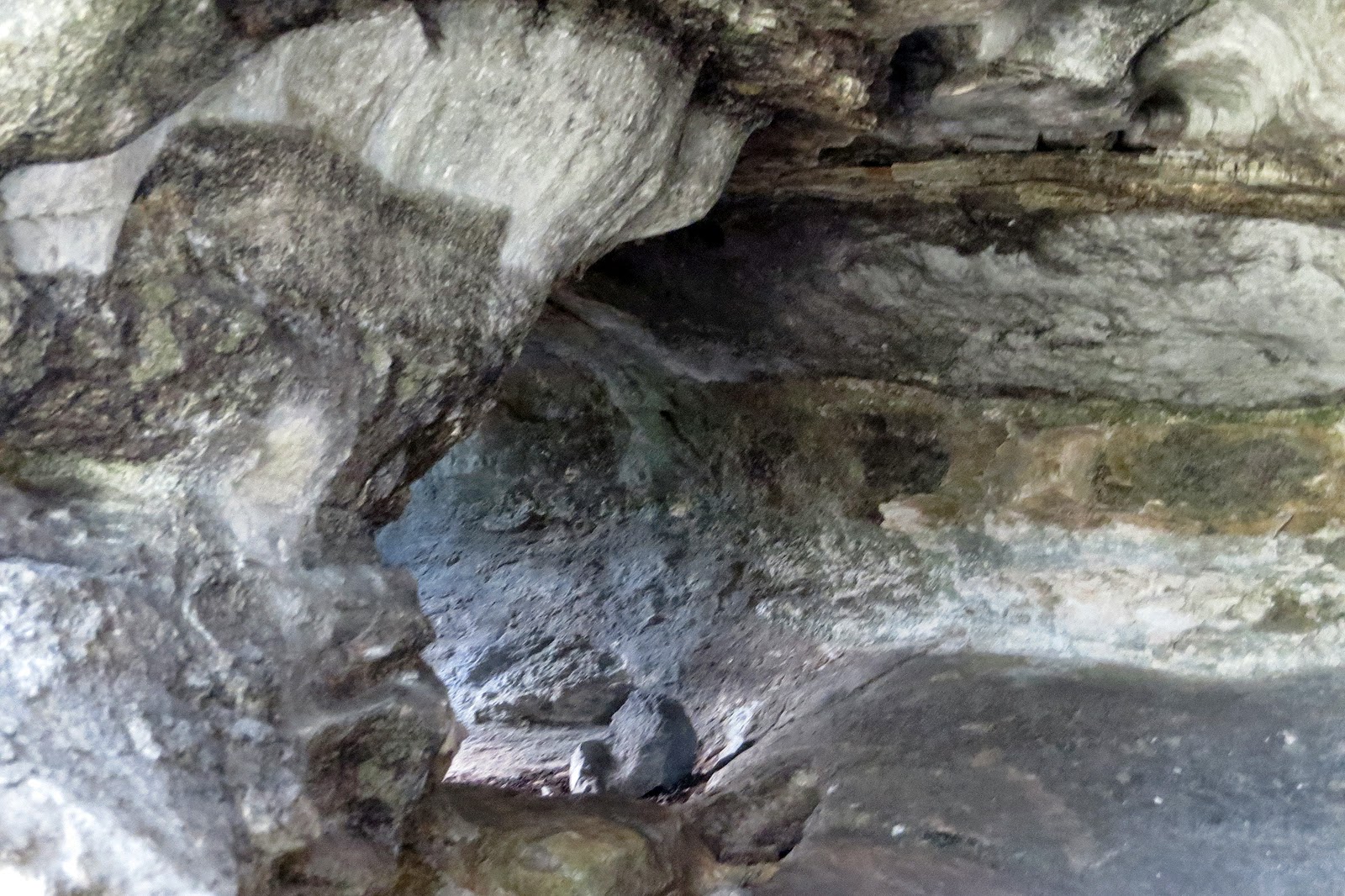 Eventually I got impatient (And my butt hurt.) and I very cautiously stuck my head into the cave, only to discover that it was only 5 or 6 feet long with an opening on both ends. . . 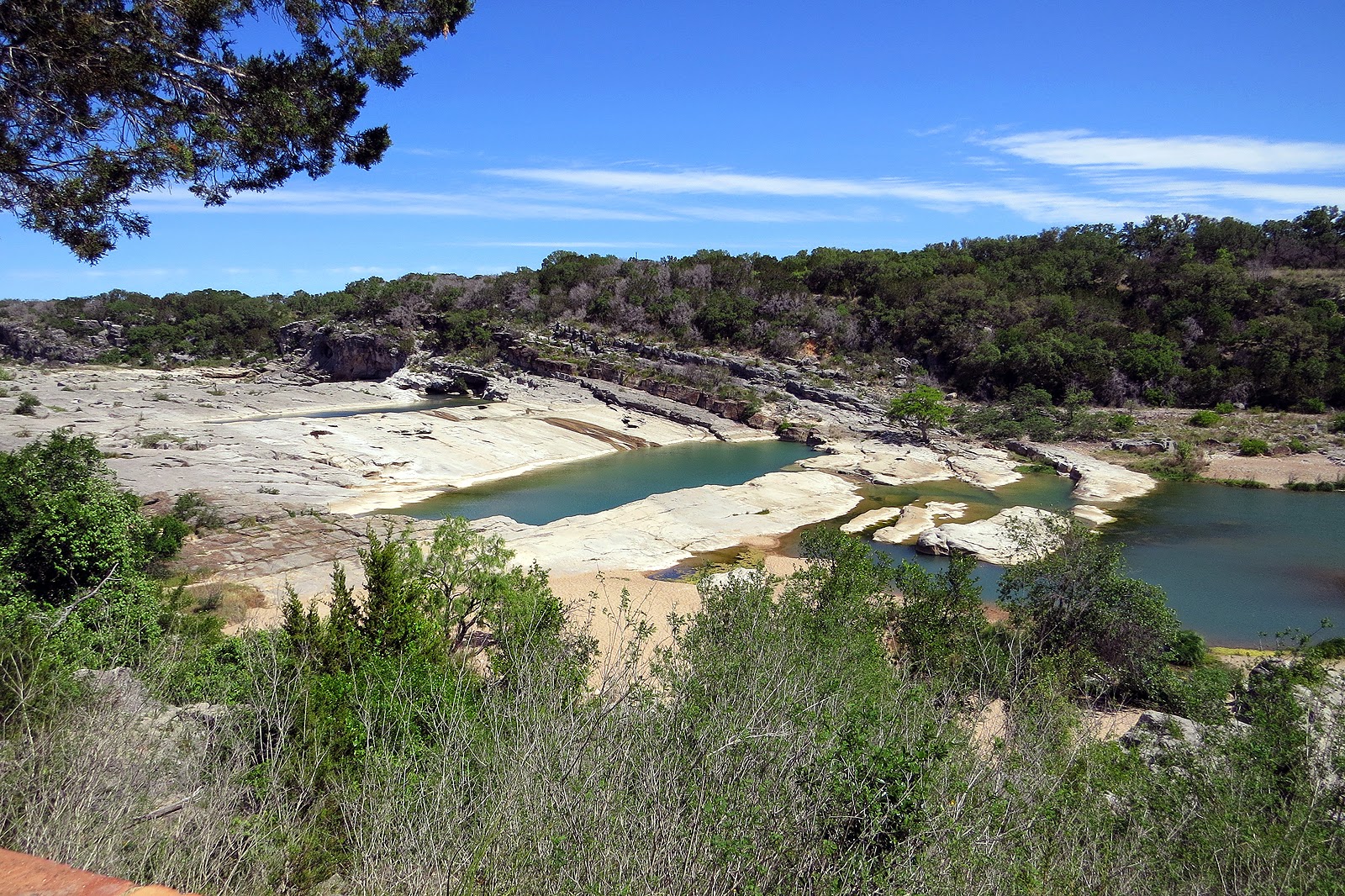 I eventually made it to the feature for which the park is named. 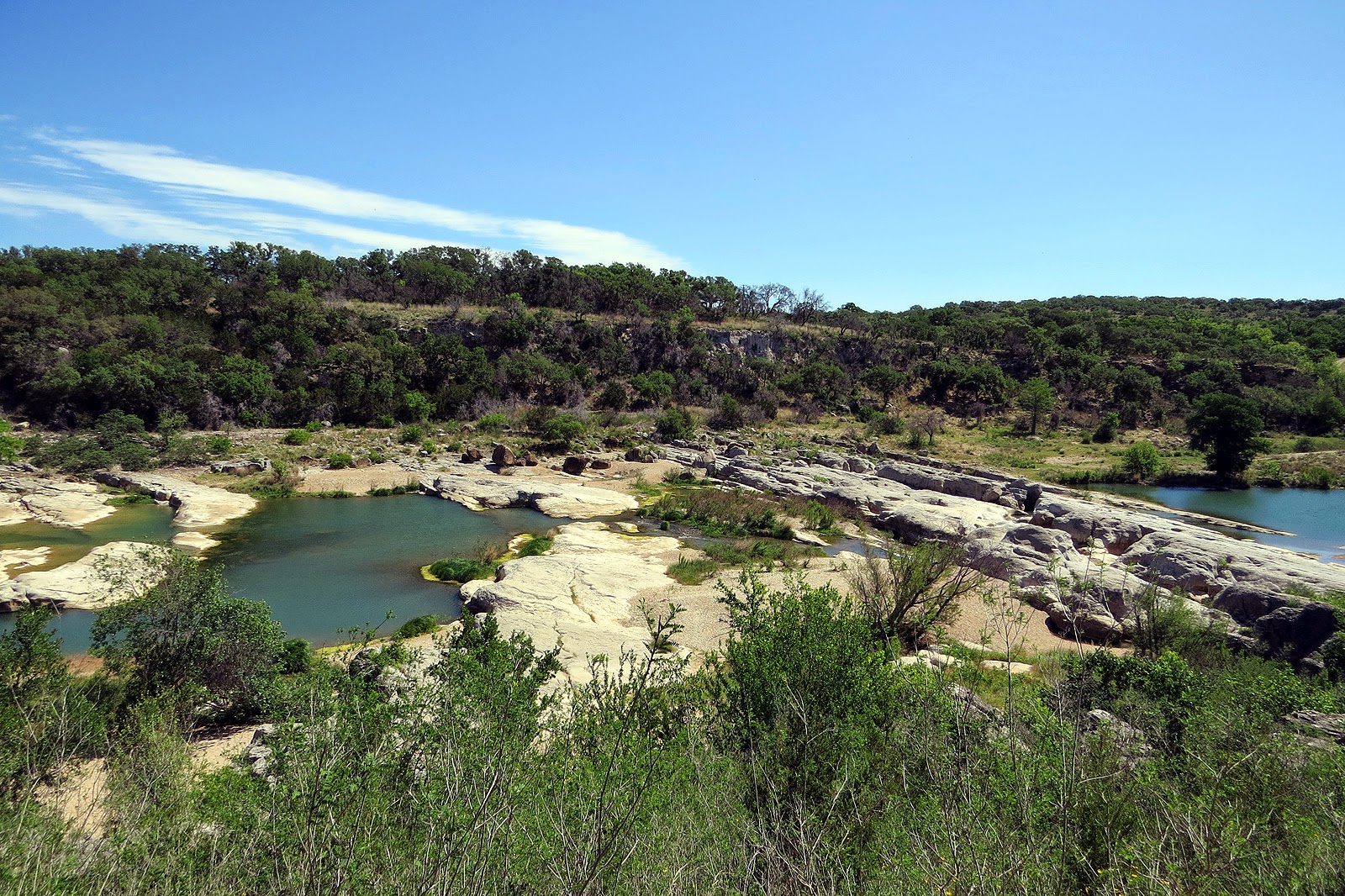 The 'falls', created by giant slabs of inclined sandstone interspersed with marble, might not look like much right now but when the water is higher they are scary. 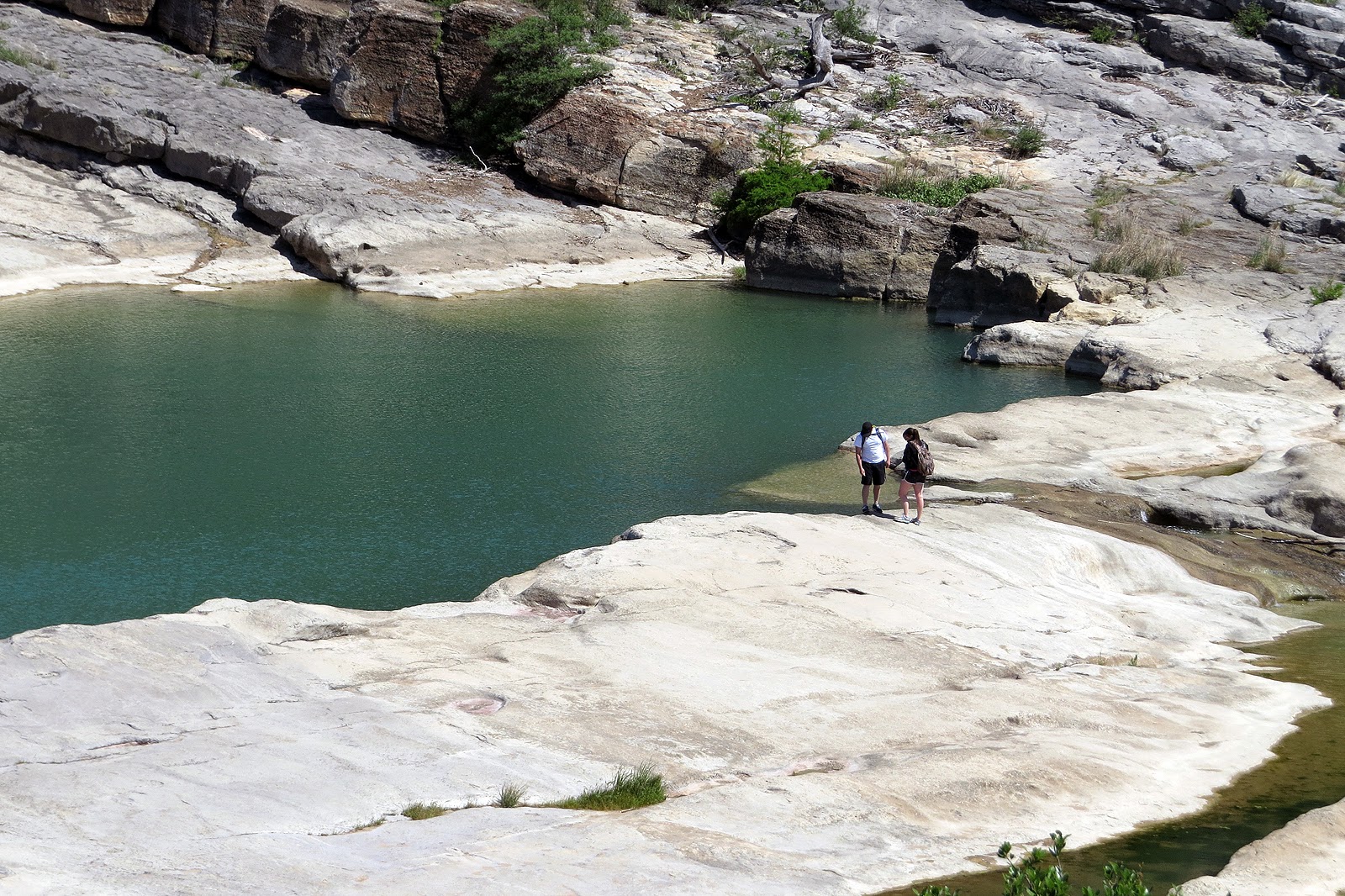 It can be a sunny day like this, but if it rains over to the west on this hard landscape the water can rise 20 feet in 5 minutes. No rain forecast, anywhere around here, for the next 8 days but I'm keeping a close eye on the water level anyway! 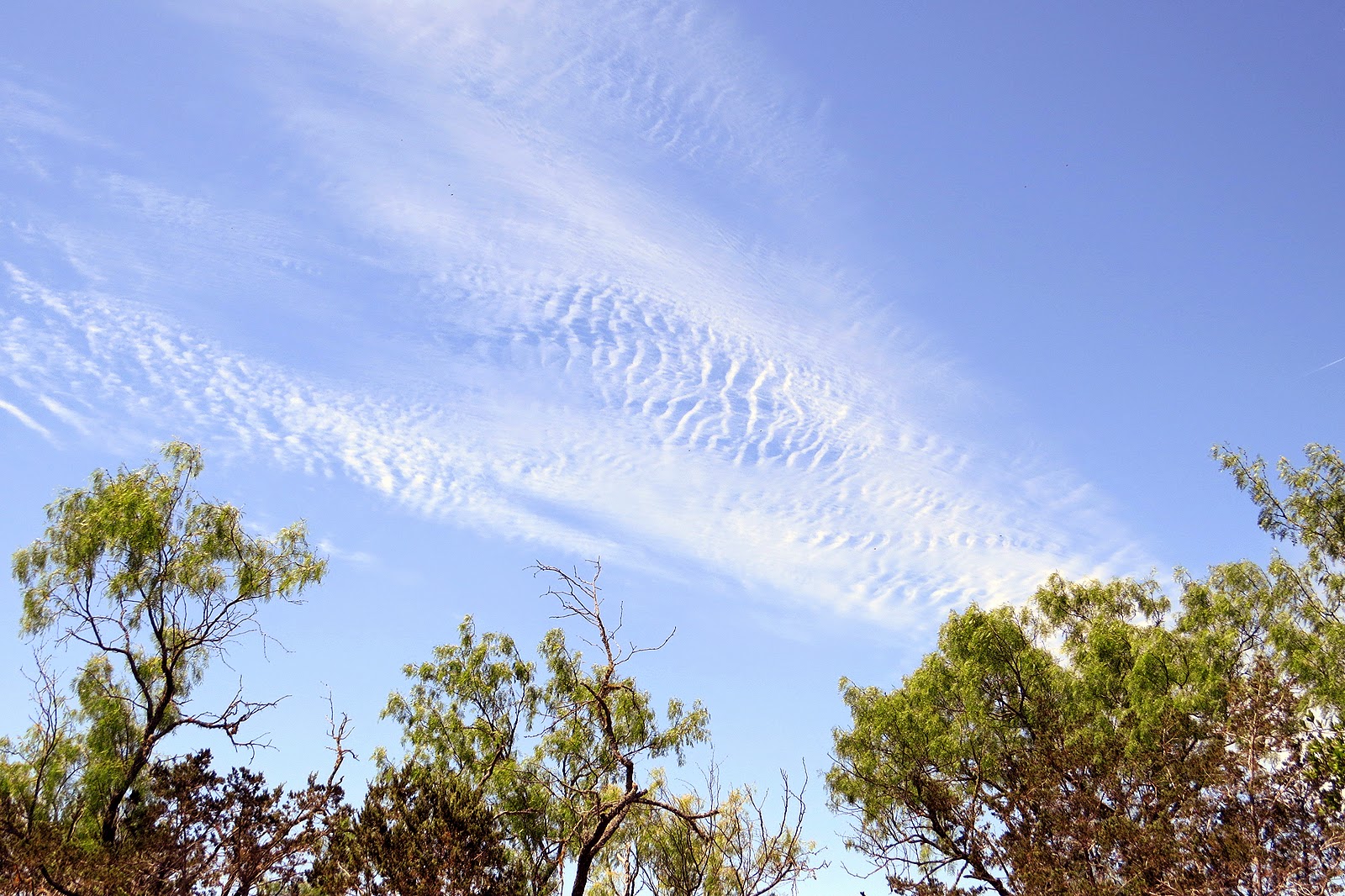 These ripples in the sky reminded me that gas and fluid, air and water, have very similar flow characteristics. 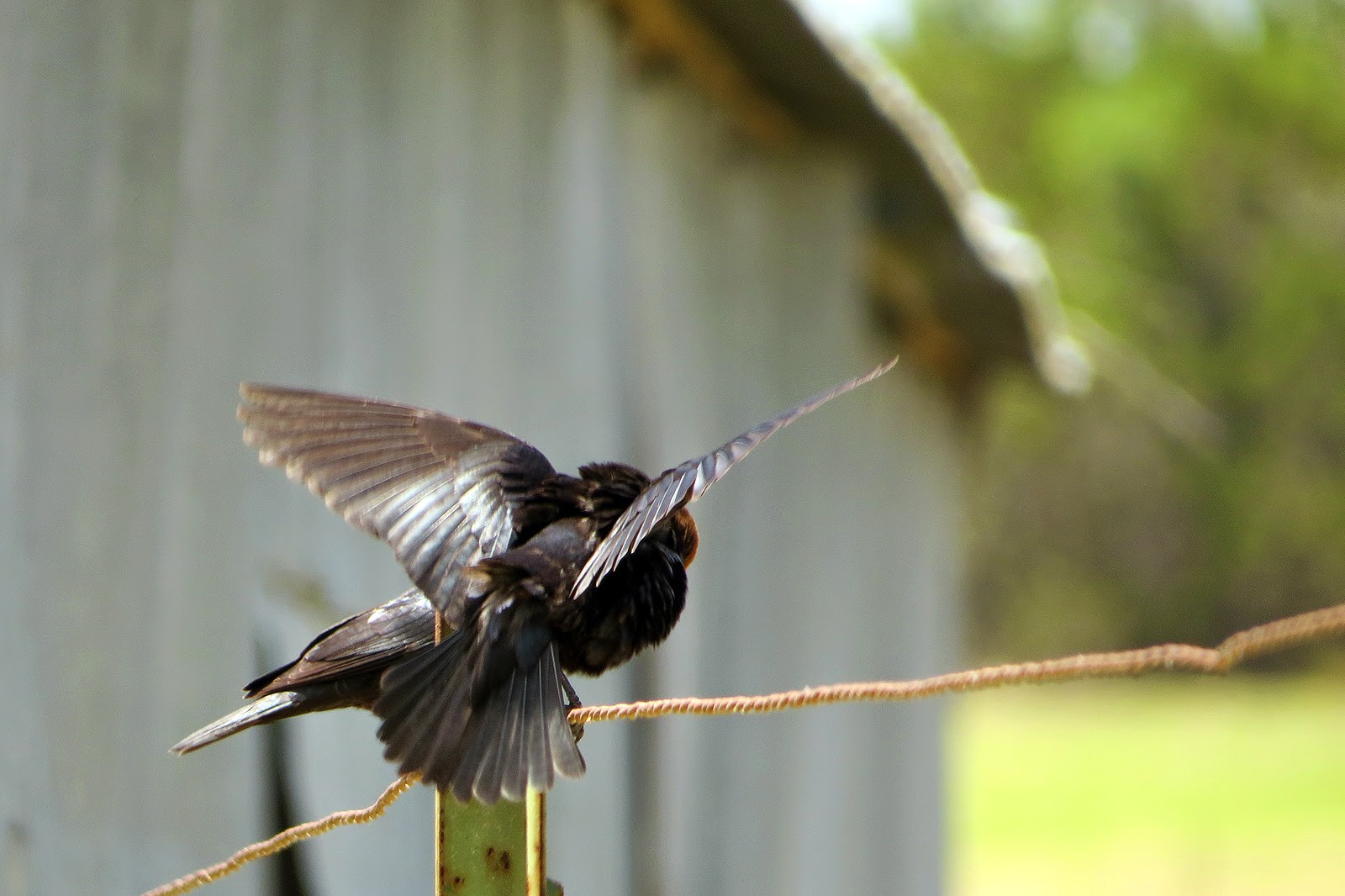 On my way back south towards the campground I make a stop at the coral right next to the bird blind and spot these guys doing spring stuff. Or rather he's doing the spring stuff, she's just sitting there. 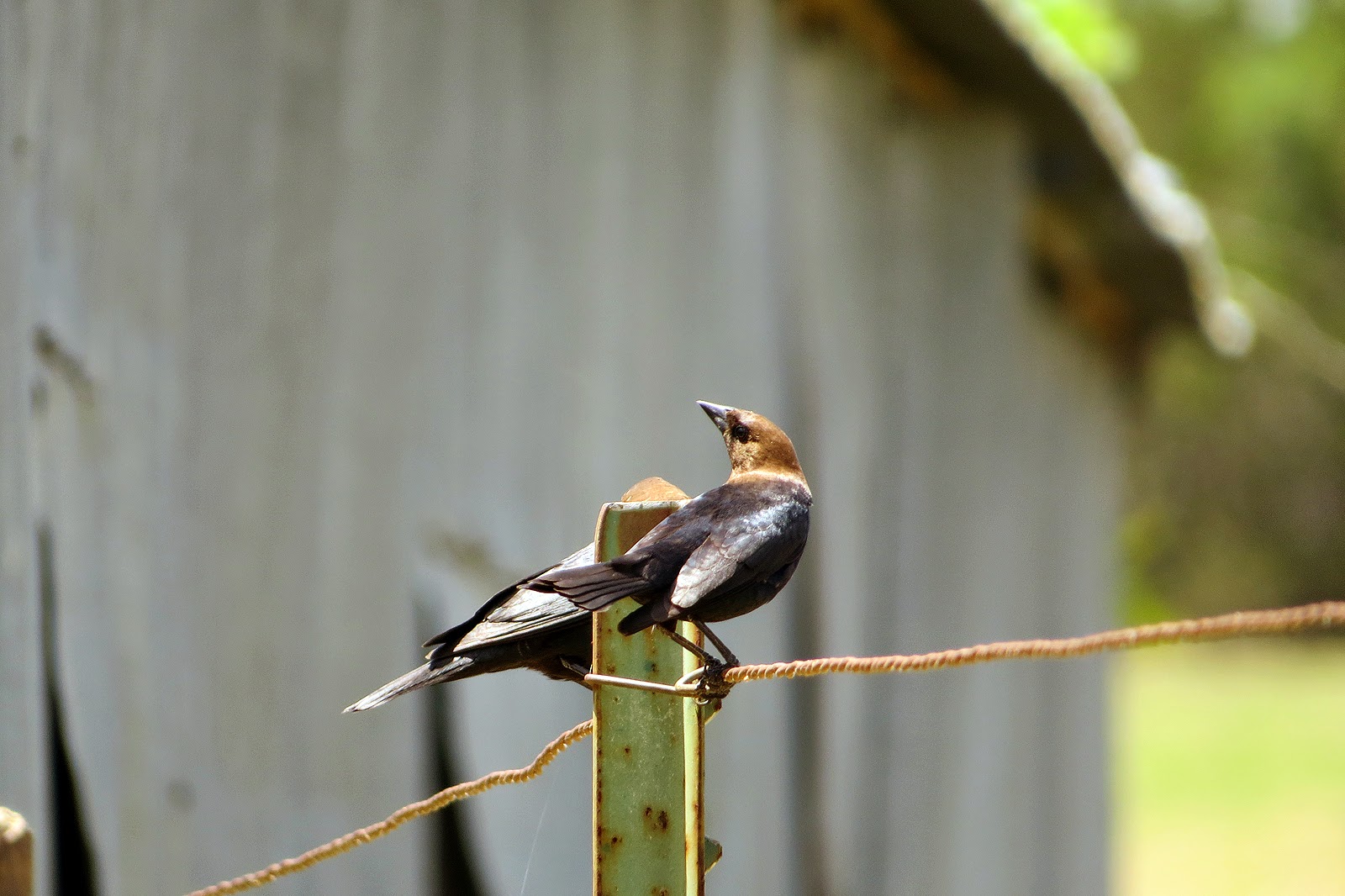 These brown-headed cow birds are not the most beloved of birds around here. Like the cuckoo, they lay their eggs in other bird's nests and the large hatchlings throw the smaller 'native' nestlings out while the confused parents work their beaks to the bone trying to keep the large chicks fed. The endangered Golden Cheeked Warbler, which will only build nests with the shredded bark of the particular juniper that grows around here, is often the victim of this game of duck, duck goose. 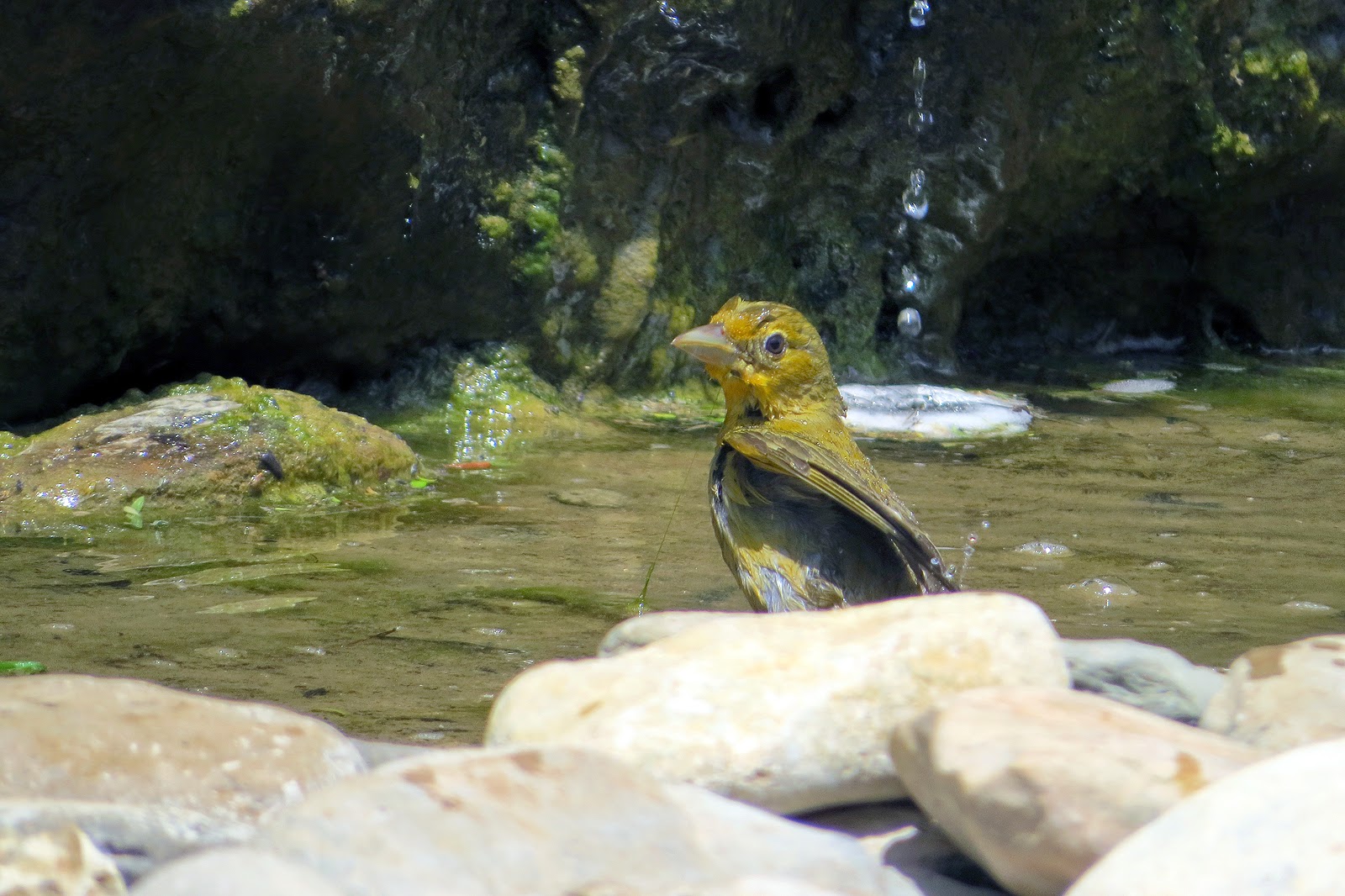 Nope, not a Golden Cheeked Warbler, but rather a female Painted Bunting. Oddly enough, the garishly colored male is spotted more often than the completely differently costumed female. 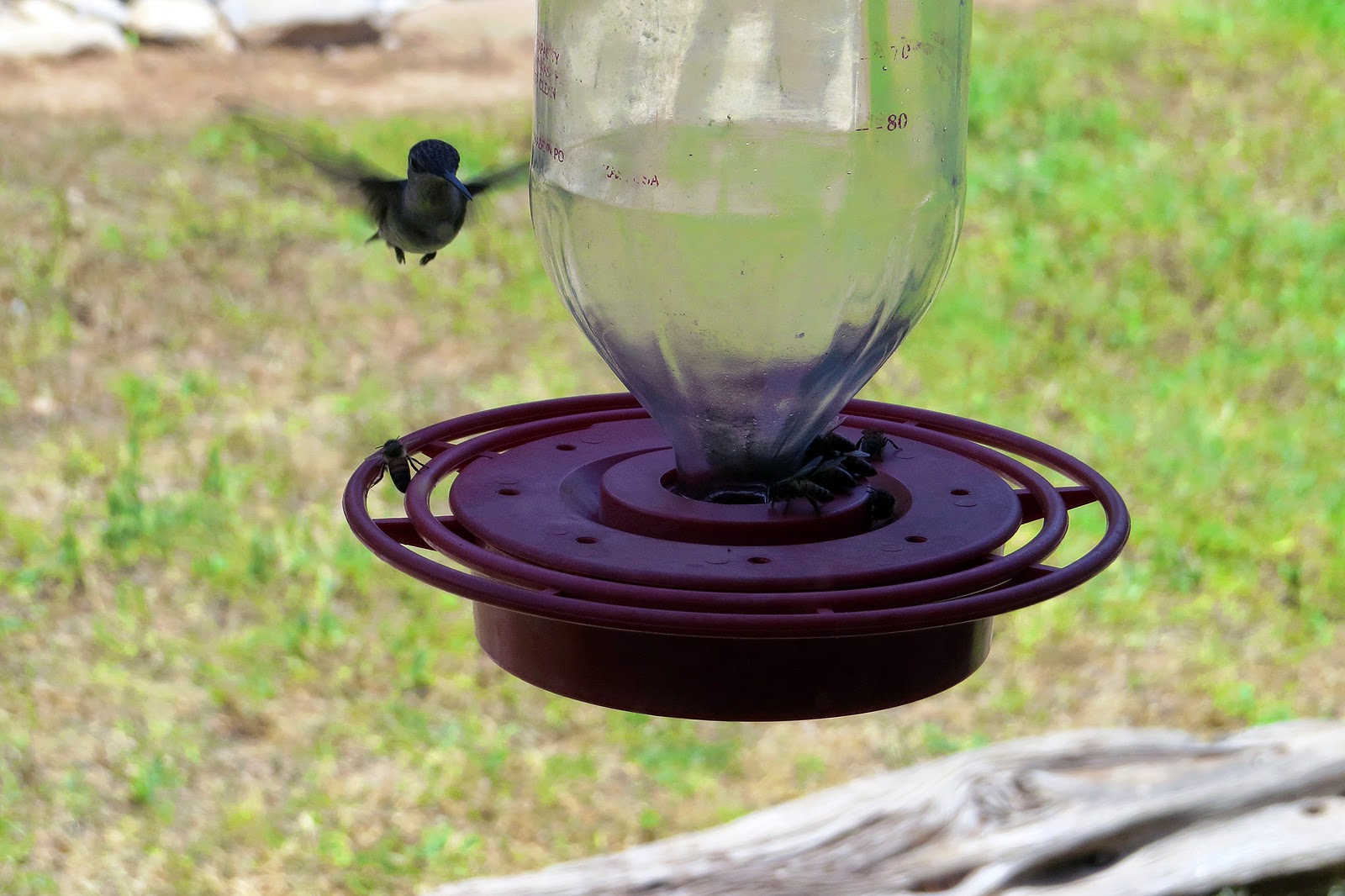 A female Black Chinned Hummingbird coming in for a landing on one of the feeders at the bird-blind. Obviously the bees also like this particular spot but in this case the birds and bees seem to cohabitate well. 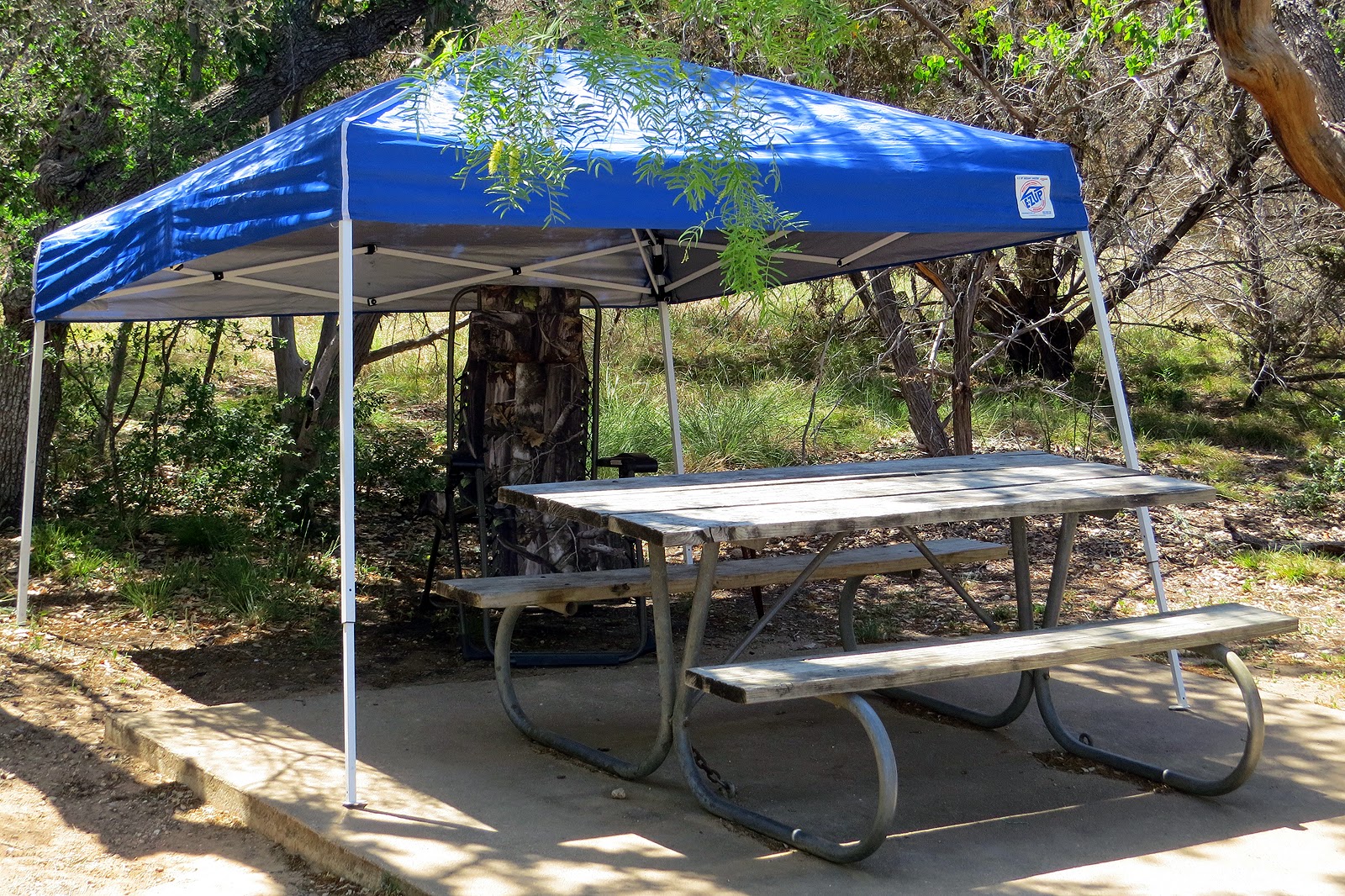 After some more cross-country bush-whacking, this time across flatter, savanna type terrain which was easier to negotiate than the steep, heavily wooded bush-whacking I did first thing this morning (But the trade off is there's far more prickly and stickery things out on the savanna than on the rocky sides of the ridge.) I eventually end up back at the campground for some rest and relaxation. 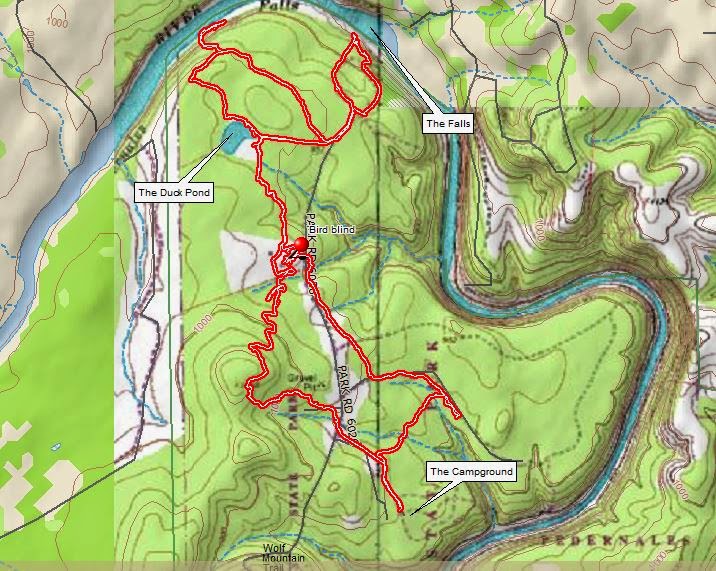