Have you ever spent Thanksgiving dinner trapped between the table and the china-hutch with one divorced parent to your right and the other to your left, putting you right in the crossfire??  Sat through the palatable tension in the midst of a miasma of malice? (I mean more so than a normal Thanksgiving dinner.)

No, me neither. But try to use your imagination anyway and multiply that dinner by a whole long weekend!

I'm asking because I recently had the opportunity to participate is just such an event. Now that could have been a bad thing, a really bad thing, but fortunately I had the maliciously delightful honor of being one of said divorced parents!!!  (Oh, excuse me. I seem to have some spiteful glee dribbling down my chin. . .) Definitely a weird situation, but then again sometimes life is just weird.

In preparation for the Weekend of visitors-from-hell I moved The Van from Oliver Lee to The Daughter's (Son-in-law too of course.) house in Alamogordo. (which translates as Fat or Thick Poplar)

Very conveniently their house comes complete with a double gate into the side yard that I can just squeeze The Van through. While doing so I only have to run over a little bit of the neighbor's yard in order to avoid scraping the solar panel off on the eave of the garage. (Desert yards are gravel so all you mid-westerners freaked out about The Van trampling the manicured-to-within-an-inch-of-its-life grass can relax.) 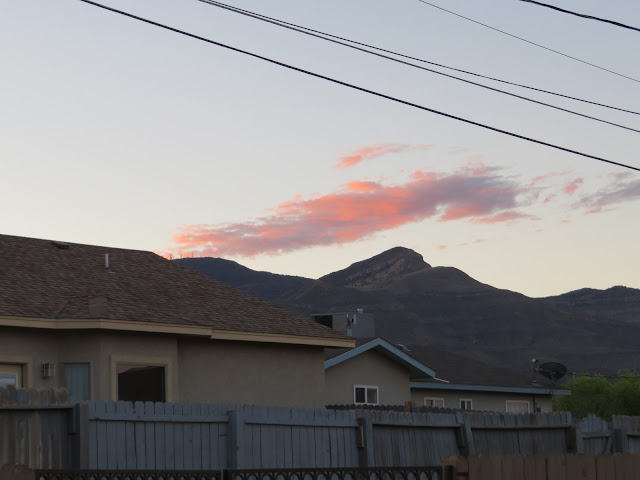 This meant that even though TD & TSIL (The Daughter and The Son-In-Law) only have the one guest room yet two "guests", rather than being relegated to sharing the couch with Lula, (A big dog that I'm not sure would welcome a couch-mate with open paws.) I could repose in the luxury of my own domicile yet be right there ready to go in the morning. 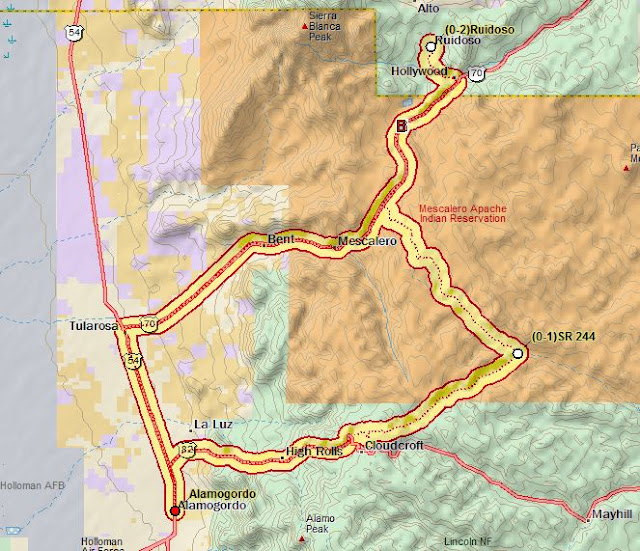 Morning came with a (strangely disappointing.) lack of rancor between The Parents that could have even been mistaken for civility. (I mean come-on! Where's the fun in a 35 year old divorce if you're going to be civil about it??!)

Anyway, the plan for this day was drive up to Cloudcroft, from there take SR 244 and US 70 through the Mescalero Apache Reservation and on into Ruidoso. From Ruidoso we'd drop back down through the reservation on US 70 to hit, arguably, the most important stop of the day, dinner at a favorite place in Tularosa. (The kids are foodies in case you wondered, and they specialize in independent (Never chain!) restaurants of merit, merit by their own standards, and frankly so far they have only discovered a few in the area that meet the grade and we were headed to one of them.) 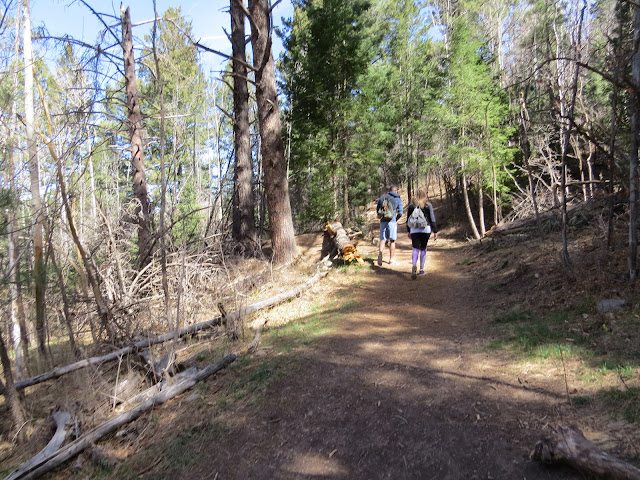 The first stop of the day was Osha Trail. Yep, the same Osha Trail where dame altitude thoroughly molested me, and not in the good way, a few days ago.

But in deference to the old-farts tagging along, (Hey! I resemble that remark!) we only tramped the short distance up to the overlooks then turned back and thunked our way one heavy step at a time down hill again. I don't think the TD & TSIL relished the thought of having to carry one or both of The Parents back down to the car so they were taking it easy on us.


All of us, young and old, survived that little slice of Osha Trail, and piled back into the car for a short detour to a brief stop at an overlook along the Sunspot Highway south of Cloudcroft. 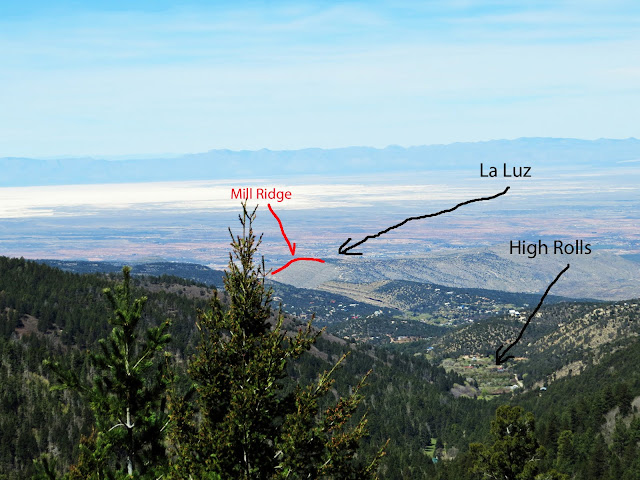 The view from here is down into the Tularosa Basin, which was formed when this whole area from the Sacramento Mountains on the east to the San Andres Mountains on the west bulged upwards like a giant zit on the face of the earth some 25 million years ago. Like a fisherman with one foot on the dock and the other on a boat drifting on out into the lake, eventually this big bulge stretched things to the breaking point and a big chunk in the middle, as in 4500 square miles worth of chunk, dropped some 3000 to 4000 feet in order to plug the growing gap, thus the basin was formed.

From here the little community of High Rolls is visible about 4.5 miles down Haynes Canyon (10.5 miles by road.) and La Luz, sitting on the edge of the basin 10.5 miles away by air, (nearly 19 miles by road) is tucked in there behind Mill Ridge,

La Luz sits just below the confluence of the La Luz and Fresnal Creeks where there was plenty of water and it was the main community in the area until the railroads made Alamogordo king.

The Alamogordo and Sacramento Mountain Railroad used to go through La Luz and on up Fresnal Canyon to High Rolls, pretty much where County Road A60 runs today, but the interchange with the El Paso and Northeastern railroad was actually in Alamogordo, which, like railroad towns did in those days, grew into the commercial center of the area.

This is kind of fishy since Alamogordo sits in a spot where only one small canyon, Marble Canyon, splits the Sacramento Mountain escarpment that it's nestled up against. This means that in the late 1800's there was virtually no reliable water source nearby, in other words no discernible reason for Alamogordo to prosper over La Luz unless you count shady back-room dealings. (Even today Alamogordo is largely run by a loose affiliation of business leaders referred to by locals as The Shifty Fifty.) 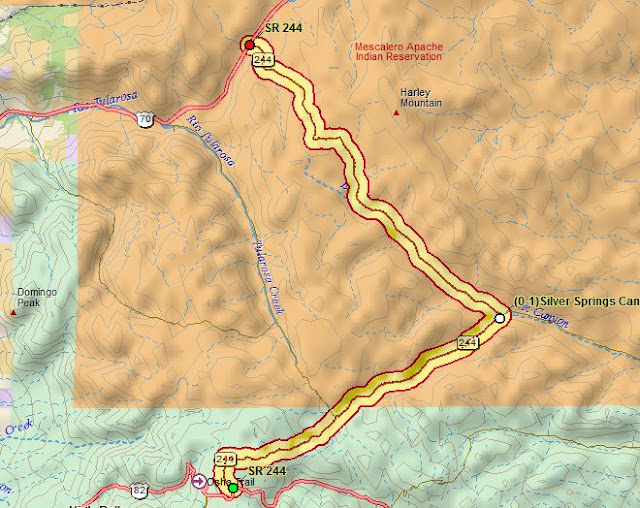 Just east of Cloudcroft SR 244 heads north and quickly crosses into the Reservation as it slips along beside Silver Springs Creek before taking a hard left at Elk Canyon to eventually come out on US 70.

The drive through the reservation on the 4-lane US 70 is pretty, but the views along the alpine valleys traversed by the two-lane SR 244 beats that all to hell. But I was in the back seat and didn't even try to get any photos along the way so you'll have to drive it yourself to see. 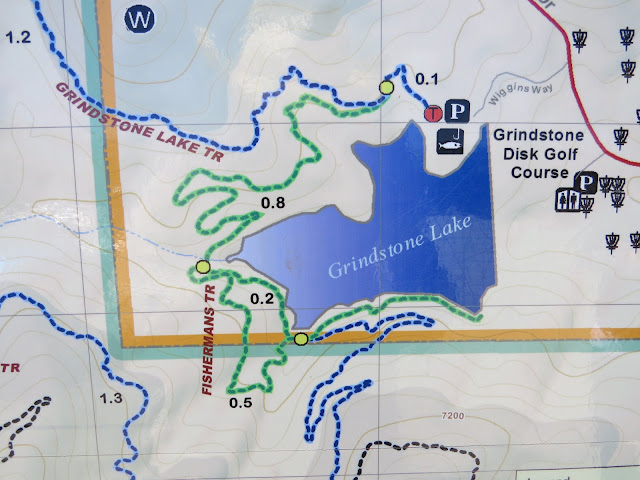 Our destination was the resort town of Ruidoso (Which, rather appropriately given the draw of the 'resort' stuff in the area, translates as Noisy or Rowdy.)

More specifically we were headed to Grindstone Lake. Sitting there right along the southern edge of Ruidoso this is a popular spot with plenty of trails to keep the hiker, equestrian or mountain-biker happy. 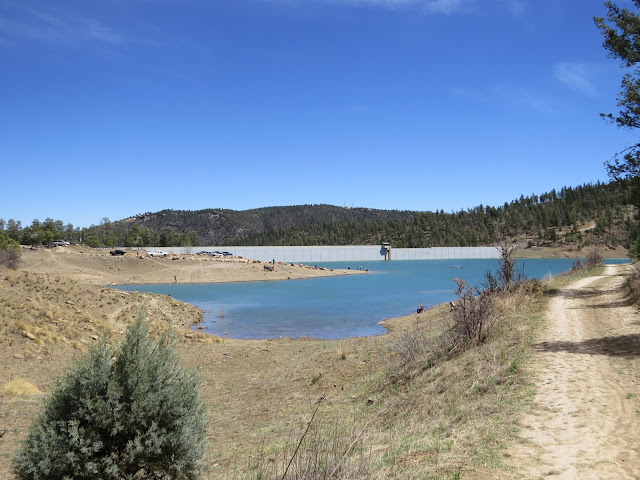 Grindstone Lake is a man-made water-supply reservoir and it's starkly apparent that this area has been going through a drought lately. 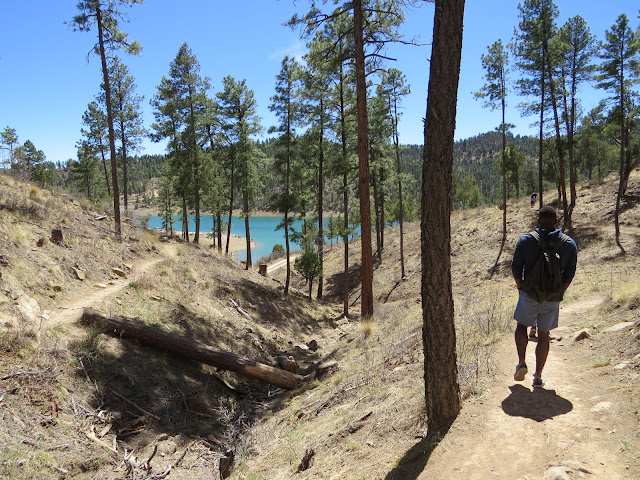 But that didn't stop us from sampling a couple of the many trails in the area. 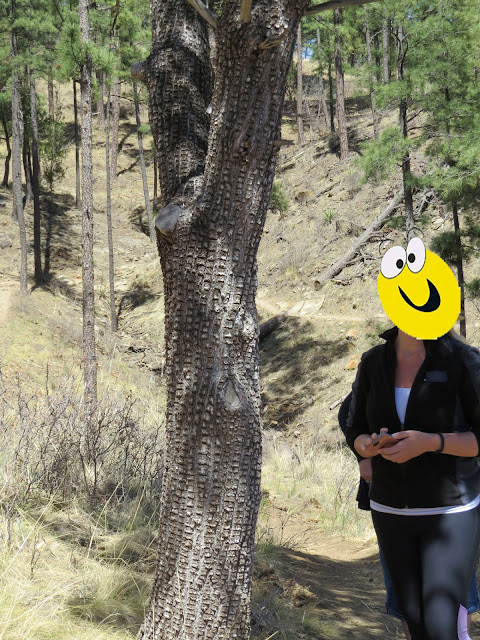 Being at around 7000 feet the area surrounding the lake is within the Alligator Juniper's range. With it's odd looking bark this is a hard tree to miss but not one you want to rub up against!

The Daughter is not shy about photo bombing  and being of the social media age and not as cynical and suspicious as her old man, doesn't mind her face being posted, but I'm not going to do it for her, though I'm not sure she will appreciate my choice of cover-up here, 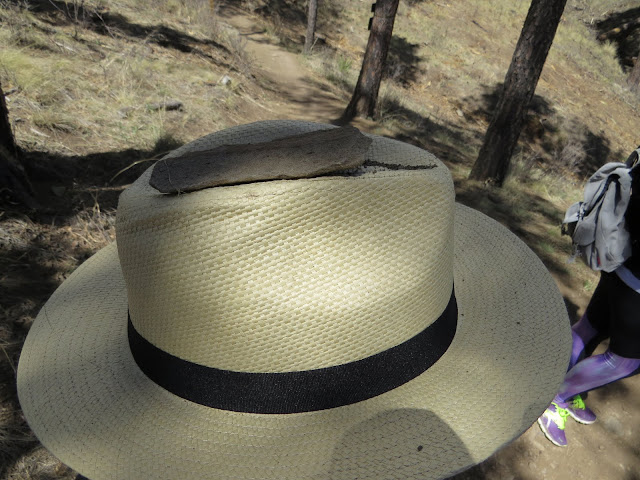 OK, here's a riddle for you. When it's windy as hell and your hat has no chinstrap to prevent it pinwheeling down the trail ahead of you, what do you do???

Why, you put a rock on top of course!! 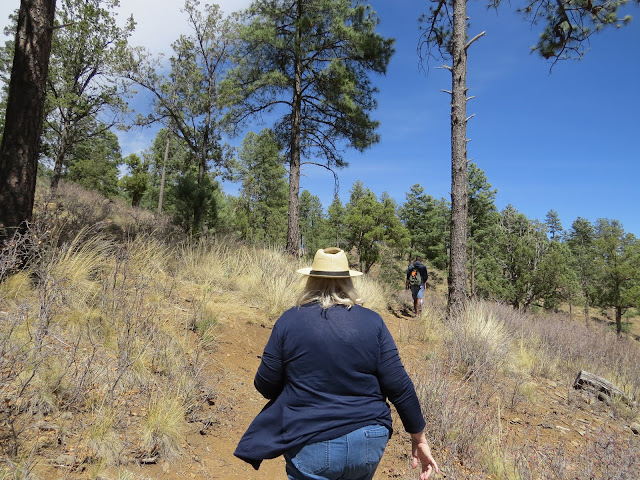 Then you can hike hands-free to your heart's content. . . 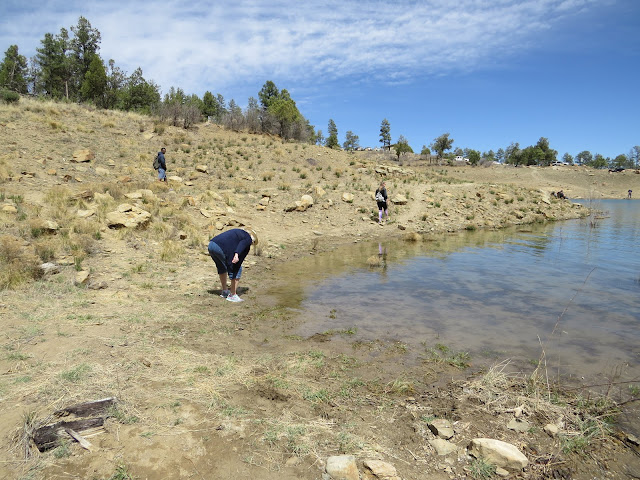 Of course if you're going to play in the water, which admit it, is an absolute requirement, (Every single one of us had to test it at one point or another, and yep, it was wet.) you just might loose your rock!!


We didn't get too carried away with the hiking, after all this is up around 7000 feet, but somehow we managed to use up a good part of the day just poking around various places in the Sacramento Mountains and it was now time to think about heading back down to the basin where food was awaitin'!!

Way back in the dark ages when I was a kid riding in the back seat with my two siblings things didn't always go too well back there. So far The Parents have managed to share that same space all day without any overt sign of a pinch, punch, eye-gouge, foot-stomp or even a hint of a squabble. Frankly I'm kind-a disappointed in myself. I mean where's the fun in parenting if you can't torture your kids with a little payback? But hey! The weekend isn't over yet!!