The Riparian Trail and The Mysterious Death of Frenchy 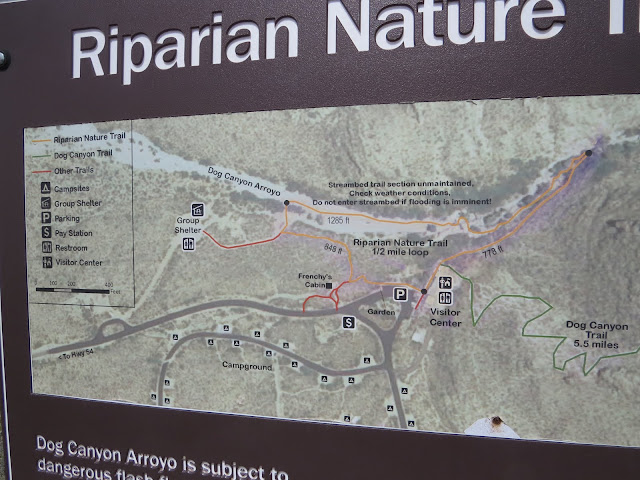 Having been chewed up and spit out as unworthy by the Dog Canyon Trail (officially the Dog Canyon National Recreation Trail but I'm pretty sure there's not much Recreation about that trail!) the last post closed with me standing in front of this sign for the Riparian Trail. I use 'me' in the singular here since, even though I drug a mess of you up Dog Canyon Trail with me, as soon as we got back off the mountain y'all disappeared!

And all because I innocently suggested a slight detour before calling it a day.

I mean sure, my knees were noodlely, my back ached, my hand was raw from leaning on the hiking stick for those countless downhill steps, and I wouldn't have been surprised if my feet were bleeding from jamming too-long toenails into the ends of my boots on that long descent, but it says right there on the sign that the Riparian Trail is just a little bitty half-mile loop so it wasn't that much of a detour. 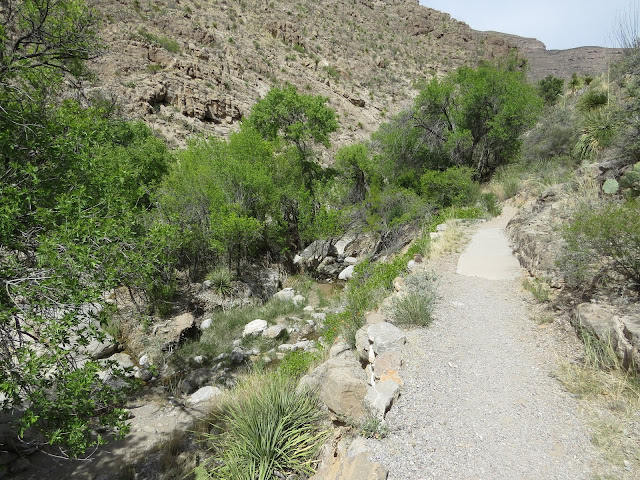 Anyway, I was all alone as I headed down the right-hand leg of the trail towards the bottom of Dog Canyon. This trail, at least this part of it, is much more civilized than the canyon trail 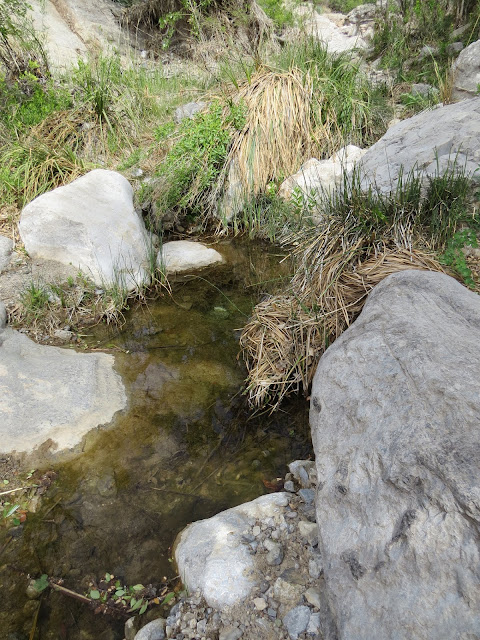 and it doesn't take long to arrive at a picnic table sitting on the bank just above open water.

Water coming down Dog Canyon is actually running underground most of the way, but here near the mouth of the canyon it trickles out of the rocks and makes a brief above-ground appearance. (All water that flows into Tularosa basin quickly disappears underground never to be seen again. (Well, OK, technically some of it does come back up out of pumped wells but you get the idea.) 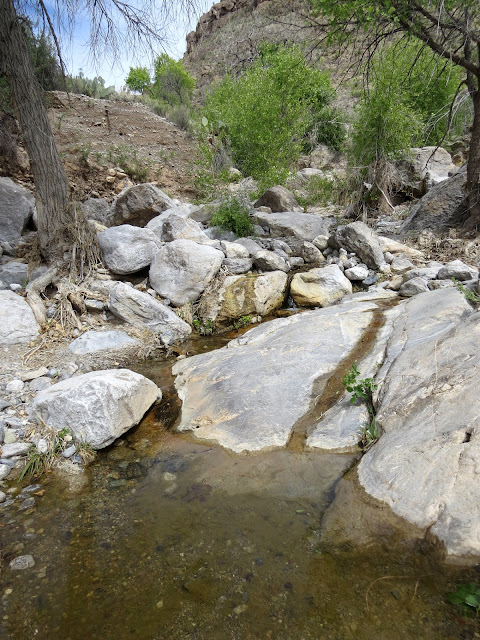 This view up the canyon from near water-level gives a hint as to why the Dog Canyon Trail does not follow the canyon's bottom but rather hangs high up on the south side until up there near the line cabin, about three miles away, where it does come back down and cross the canyon bottom to the ruins of a cabin used when cattle were up the canyon for the season.

Even if I wasn't already as worn out as grandma's old bathrobe (eww! I didn't need to see that! Close your robe grandma!!!) the thought of trying to scramble up that jumbled mess of boulders would have turned me back. 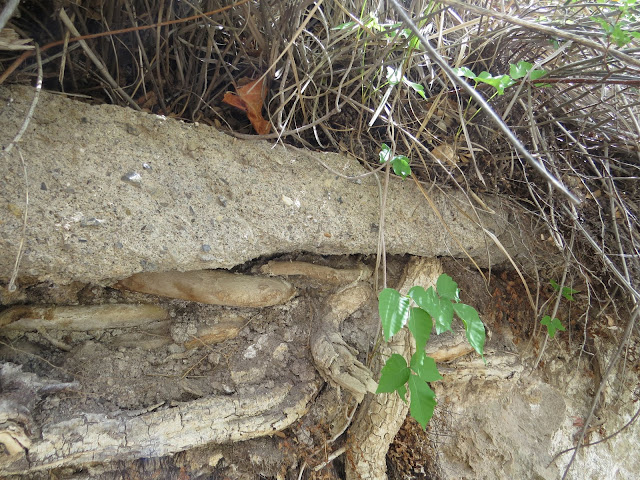 As you might imagine, water has always been an important commodity down here in the Tularosa basin. and what you are looking at, there between the heavy roots below and the dried stalks above, is a piece of concrete flume laid by Oliver Lee as part of an irrigation ditch that runs the mile and a half down to his ranch-headquarters. 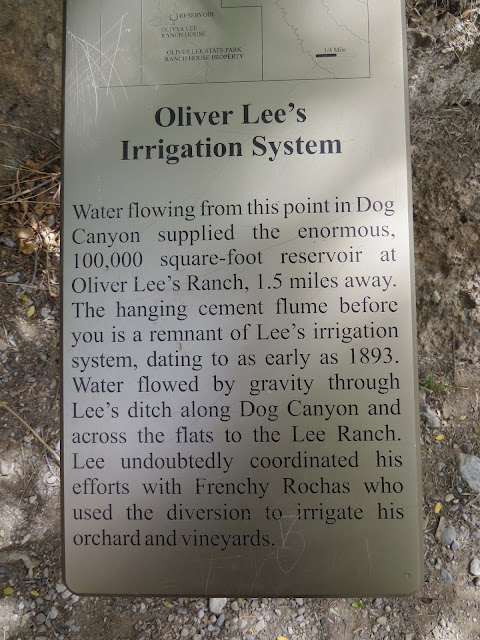 This plaque suggests an amicable relationship between Frenchy, whose claim is now occupied by the state park, and Oliver Lee, who's ranch was just to the southwest, but there are suggestions that that might not have been the case. In the late 1800's, early 1900's the Tularosa basin was more like the wild-west of our childhood movies and TV shows than most of the west ever was. A contentious place with rivalries, corruption, land-grabs, water grabs, murders, disappearances, and all the other stuff that made for legends and Lone Ranger TV show plots.

To get a more balanced and modestly unbiased account of that part of the history of the basin than you might get from a place called the Oliver Lee Memorial State Park, check out this PDF. 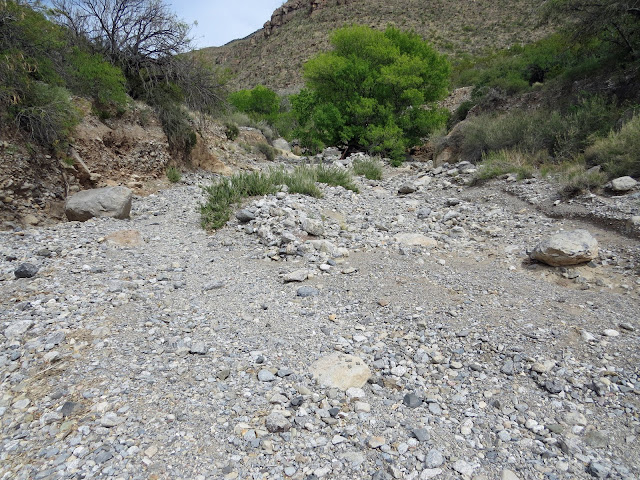 From this point the trail heads westward, right down the middle of the wash in the canyon's bottom, but fortunately the canyon is starting to spread out here as it intersects with the basin so things aren't quite so jumbled up and the walking isn't too bad. 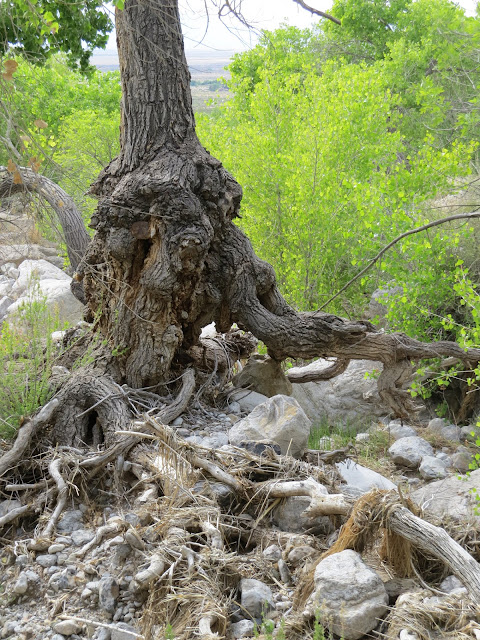 But if it's been raining up in the mountains you might be better off skipping this part of the trail and sticking to the high ground!

Clearly this tree, which is still living by the way, did a significant part of it's growing when the ground level was a good 5 feet higher than it is now. Water is a good thing a lot of the time, but when there's more of it than usual it changes from being a resource to being a mountain-mover as it tears it's way down through solid rock. 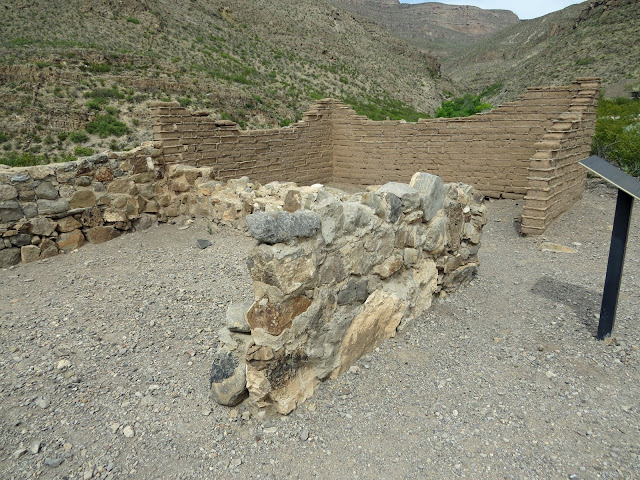 As I've mentioned before Oliver Lee State Park is actually sitting on top of Frenchy's claim while the Oliver Lee ranch is a good mile to the southwest. Frenchy built his cabin on a bench just above the wash at the mouth of the canyon. Nowadays the campground road passes within a hundred feet of the cabin site. 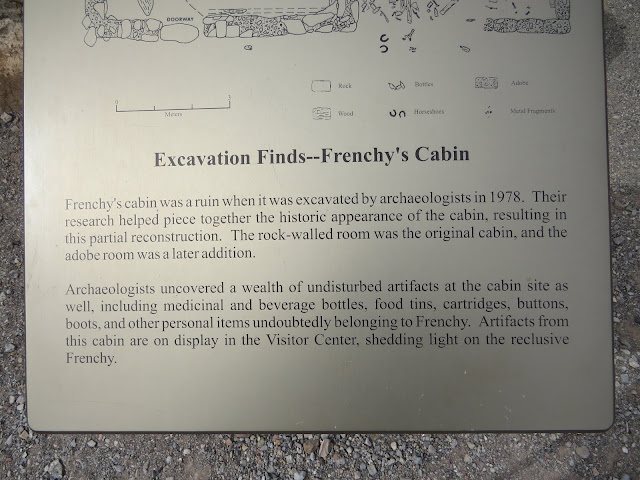 But this is harsh, and largely empty land, even today, which means Frenchy's place was pretty much left alone following his mysterious death due to a big ol' hole in his chest from a gunshot, either by murder or, for the wildly fanciful among us, possibly suicide, in 1894, allowing a 1978 archaeological dig 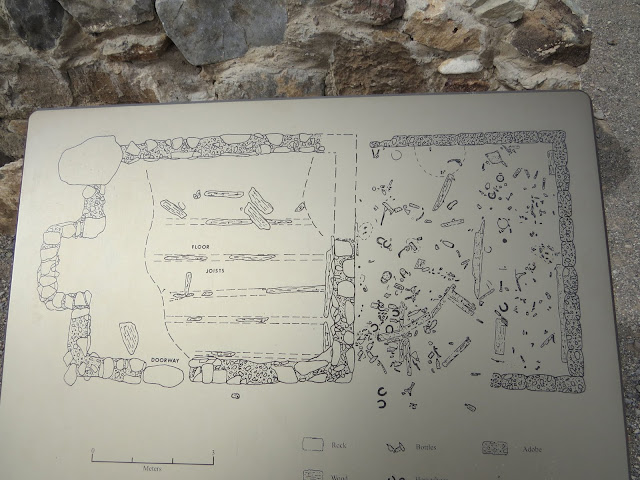 to map his cabin and recover a number of artifacts nearly 100 years later. 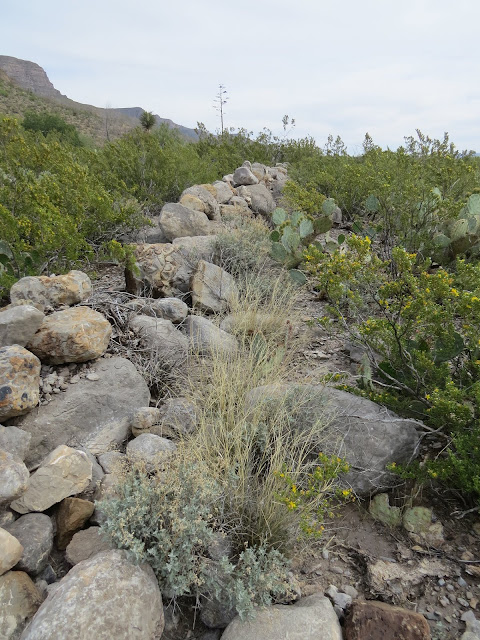 Another thing left behind by Frenchy that can still be seen today are his rock walls. Despite the amount of labor they must have required they are all over the campground, his former homestead, 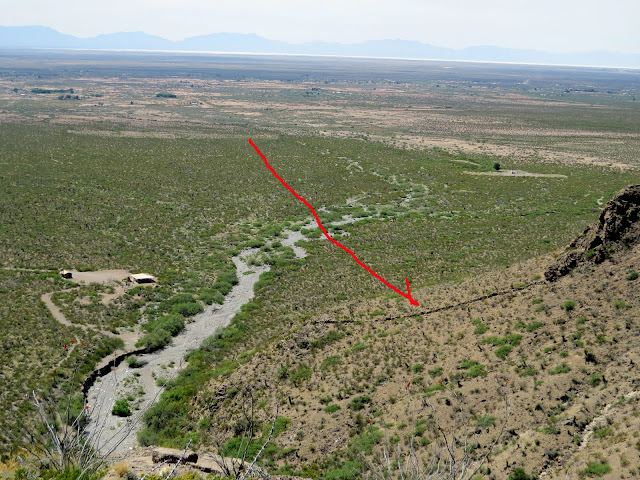 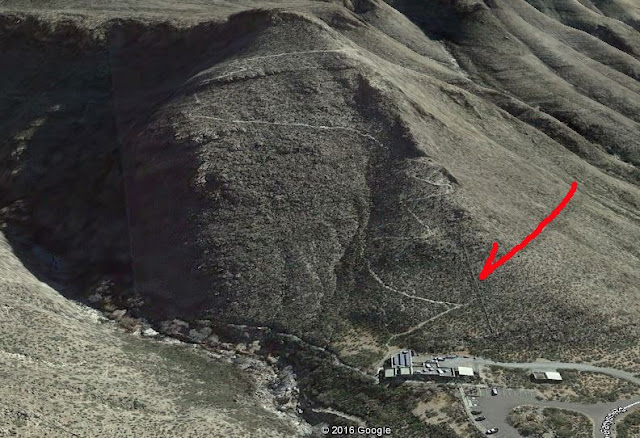 and this one closing off the south flank of the canyon mouth.

That was pretty much the extent of the Riparian Trail and I finally drug my weary self back to The Van. 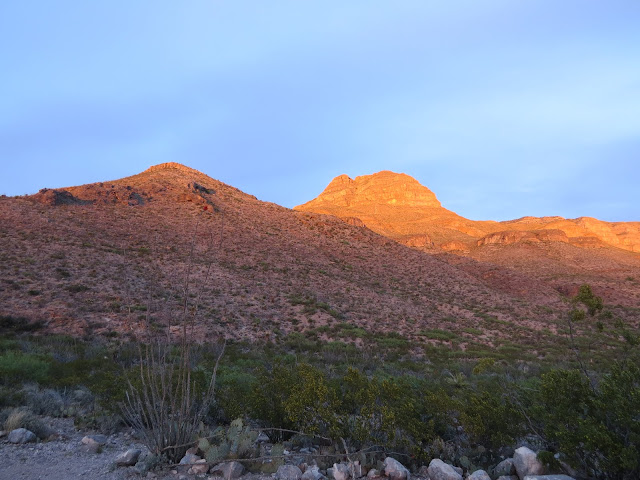 In addition to nearly wiping myself out on the canyon trail, by now I had pretty much wiped out the day and just had time to get back and chill for a few minutes while watching the sunset. 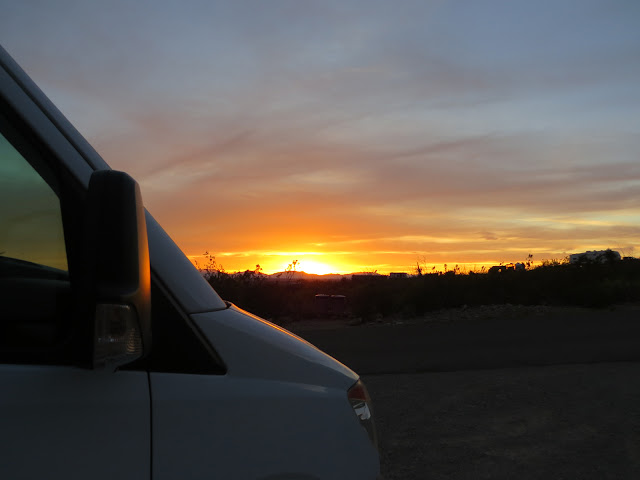 And I even managed to dredge up the energy to take a few photos as my ignominious day ended.