Again, as with Living Desert Gardens and Zoo, Dog Canyon, and Three Rivers Petroglyphs, there could be location confusion here too. 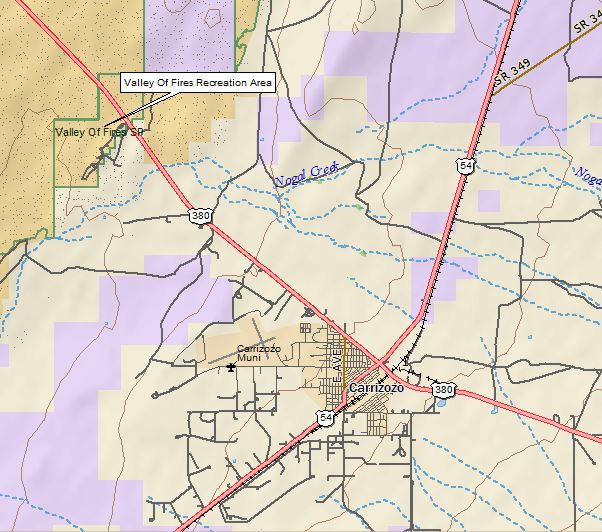 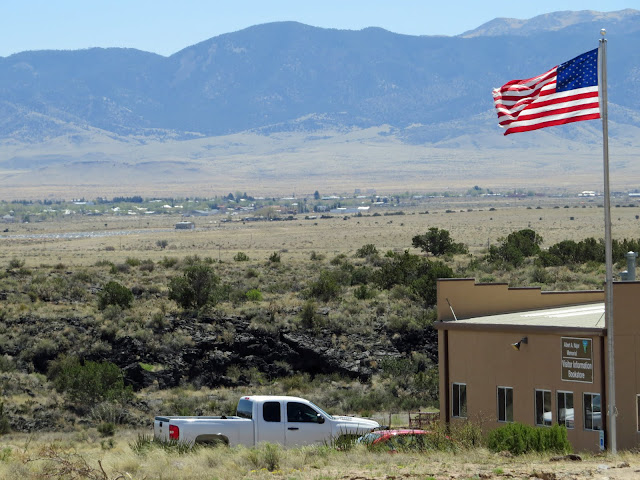 We're still here in the Tularosa Basin, about 4 or 5 miles northeast of the basin town of Carrizozo on a low ridge poking up in the middle of the Malpais lava flow. (More confusion possible since malpais is Spanish for bad-lands and there are many other places, including at least one more right here in New Mexico, named that.!) 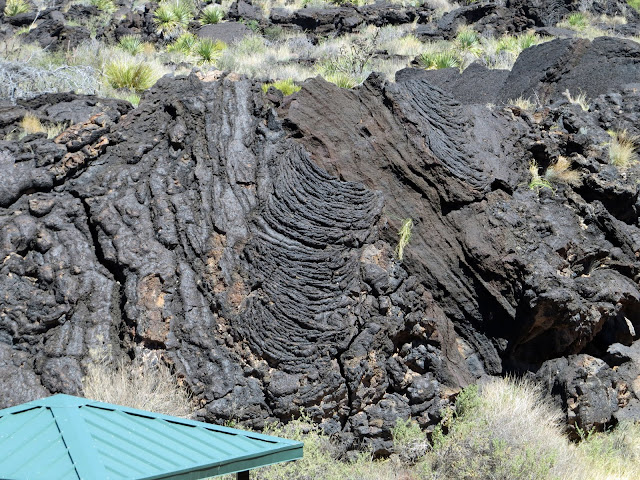 At 1500 to 2000 years old, this is among the youngest lava-flows in the 48-states, but looking out at this I'm kind of glad I wasn't hanging around to watch it happen! 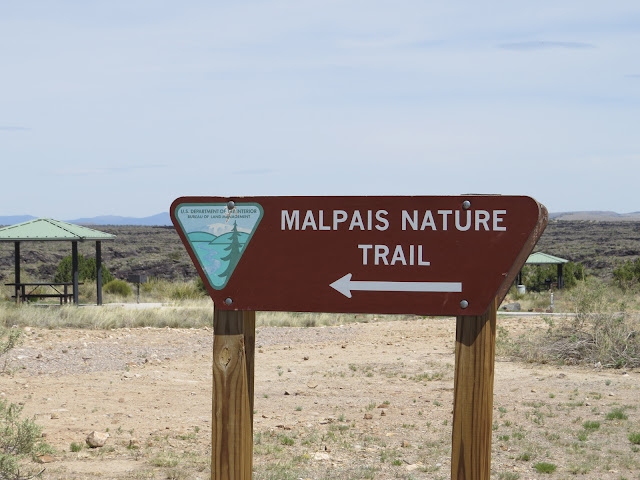 For most visitors the key attraction here is the Malpais Nature Trail that wanders out onto the lava flow itself. 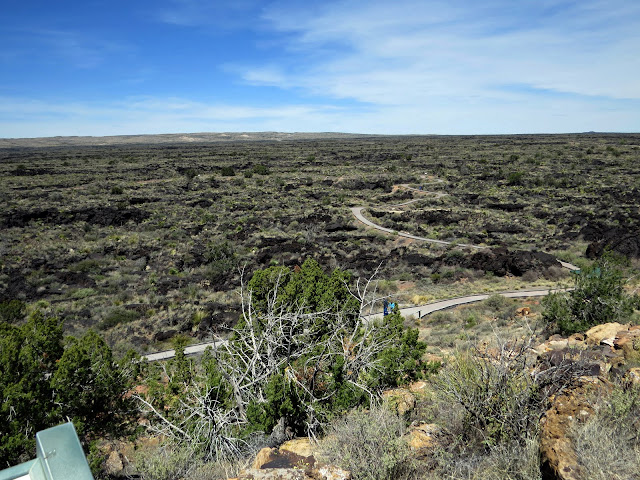 This slightly less than one mile loop is paved and fully accessible, 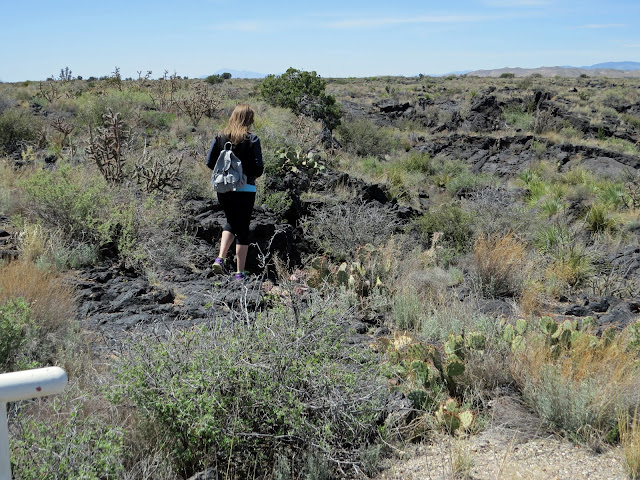 but there are also spots along the way where the intrepid can wander out onto the lava itself. But the footing out there is not very forgiving so be careful! One slip and you could get sliced up worse than a tie caught in a shredder at the office Christmas party, and footwear won't fair any better so opt for sturdy if you plan on wandering off the paved trail. 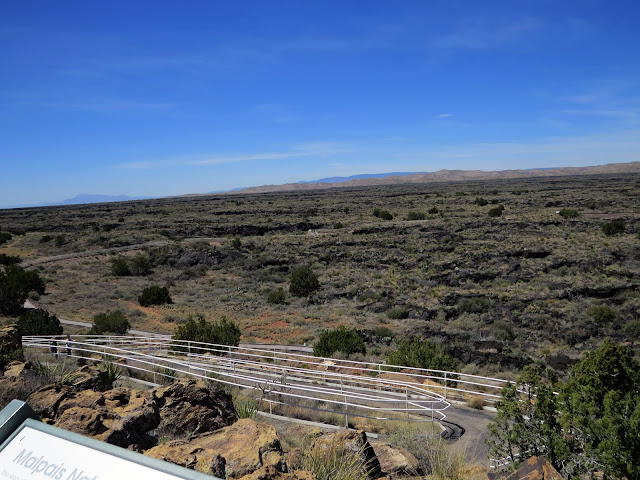 There is a bit of a drop from the trail's start, there up on the ridge, down to the flow itself, but the gentle, ADA compliant switchbacks take care of that. 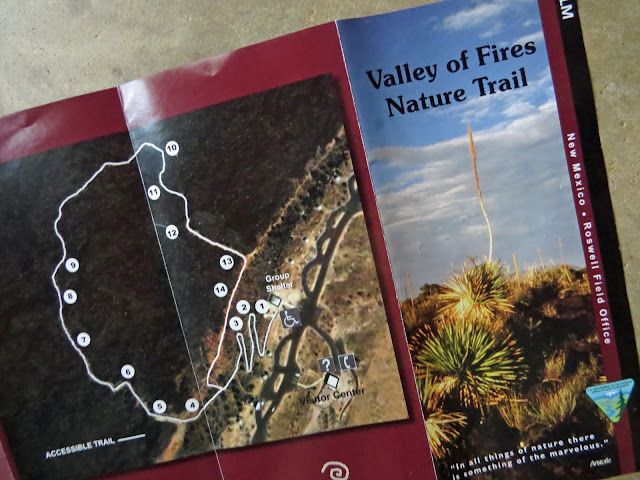 This is a fee area with a self-pay station at the entrance out by the highway, but it's still worth-while going on down to the visitor center to pick up a guide to the trail before setting out on it. 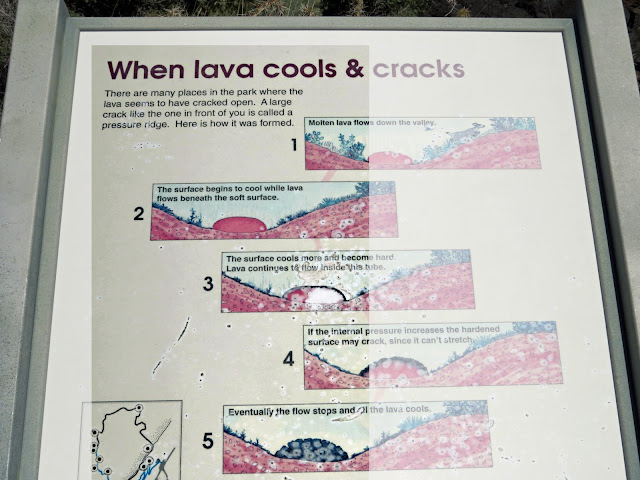 In addition to the numbered stations with their corresponding information printed in the trail guide, there are a number of additional information plaques along the trail. These are getting rather sunburned and a little fuzzy, but are still readable with some patience.

The right side is as they actually appear, the left is where I have used an editing program to enhance the clarity. 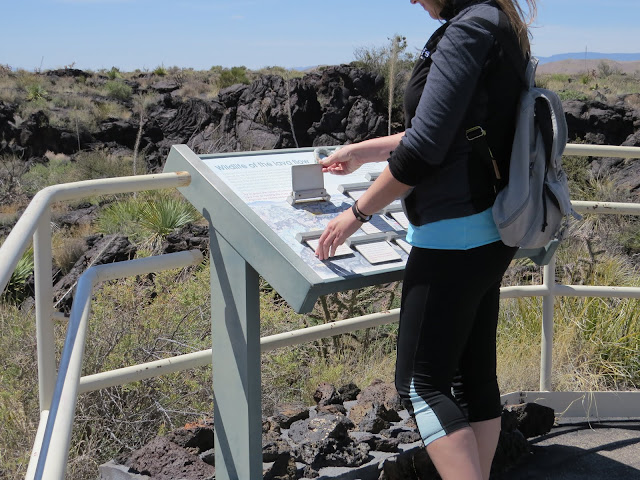 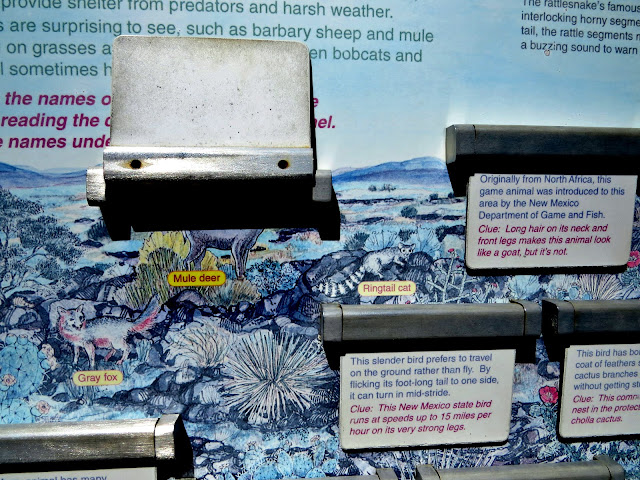 along the way like this fauna-themed one. (Again, this image has been enhanced through editing for clarity.) 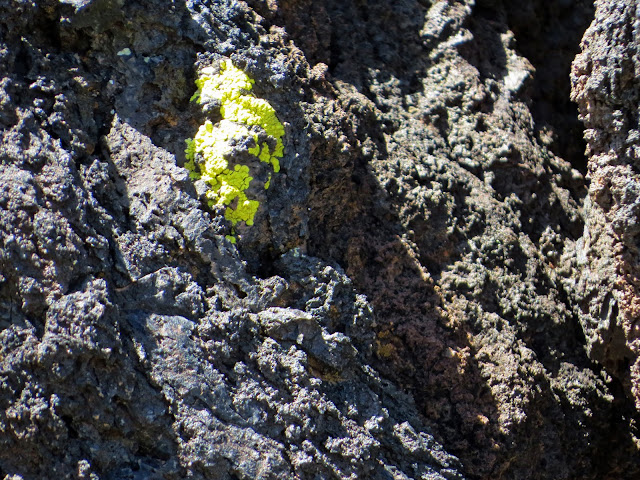 It's amazing what will grow on the lava, (Can you imagine how hot this stuff gets in the summer sun!!) everything from lichens 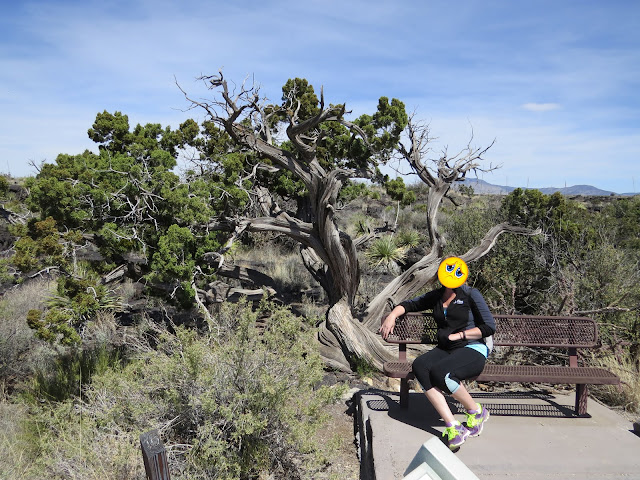 to this 400 year old thing!  No! I mean the Juniper, not The Daughter!! (Though, come to think of it, it has been a long time, and I mean a really long time, since she took her first plane trip at the age of one month. . .) 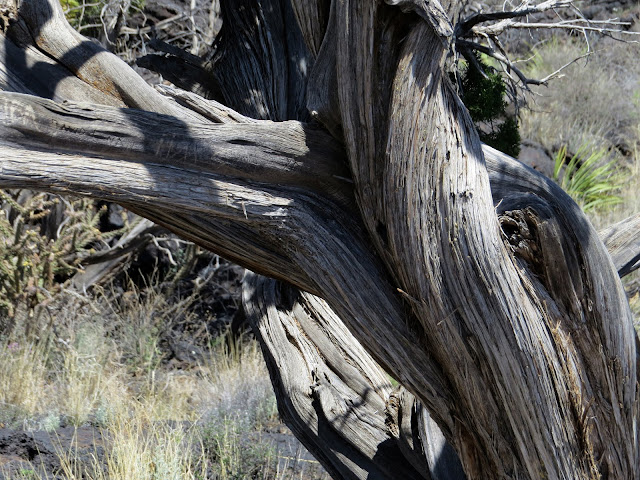 It doesn't really look all that alive does it?  (The Juniper dammit! I'm talking about the Juniper!!) 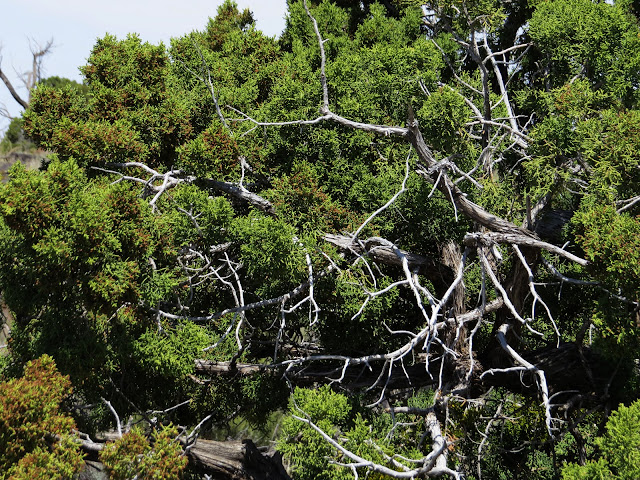 But it is!  Robustly alive in fact. 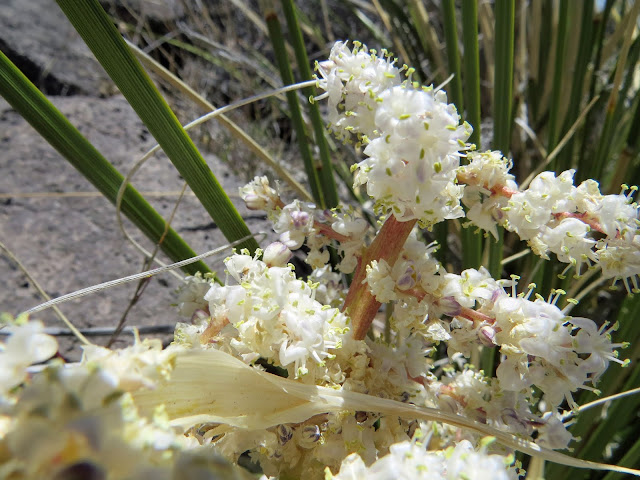 We were there the week before Easter 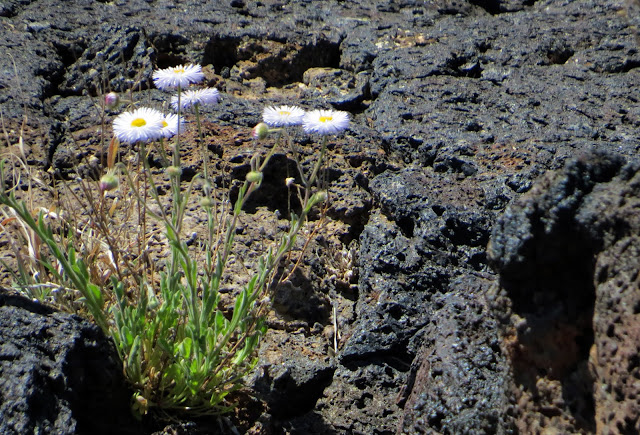 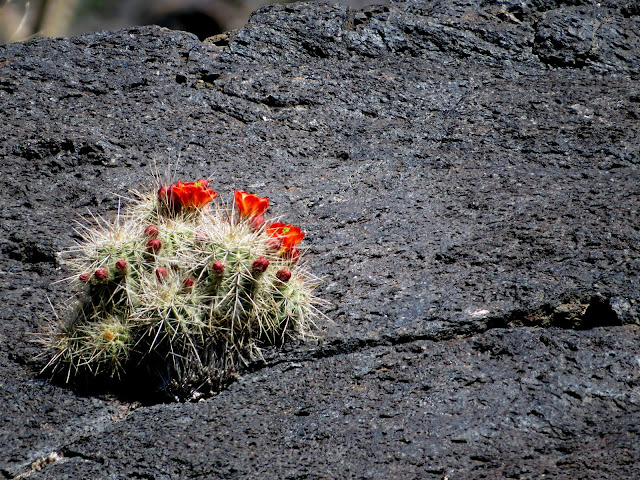 were blooming nicely, thank-you very much! 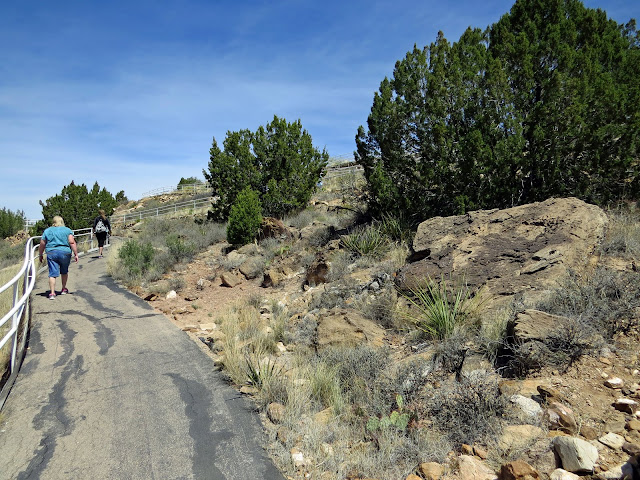 Eventually we'd wandered the entire loop and it was time for us to start the climb back up to the parking area.

There is a much more primitive trail across the lava down at the southern end of the ridge the campsites sit on, We were told that this trail has seen some recent maintenance and improvement, but once we were back in the comfort of the car that was off the books for us. Something to check out next time.