Getting My Ass Kicked in Dog Canyon

For around 15 years now I've been sticking 'pins' in my map. Each pin is a place I would like to visit one day. (Many have already been visited but I'm reluctant to remove pins in case I want to go back. Who knows when I might get a hankering to stop by the One and Only Hippie Memorial again.)

But there is one pin I've always been sure of for some reason, one of the very first pins I stuck in the map those many years ago. It's for the Dog Canyon National Recreation Trail.

This is not your neighborhood nature trail! In fact the 5.5 mile (one way) trail is ranked as difficult and for experienced hikers only. (By the way, that means people with the legs of a teenager in heat!) The trail map I picked up at the visitor center describes the hike as 'a rigorous day-hike up the escarpment of the Sacramento Mountains that climbs 3100 feet'.

This trail has been used for thousands of years as a route between the arid and hot Tularosa basin and the cool forests of the Sacramento Mountains. First by the original human inhabitants of the area, then by what we now call Natives, followed by the US Cavalry that was persecuting those natives in accordance with the hideous policies of the invading government, (Policies that are horrifying but not unique as, with the notable exception of Alexander the Great, throughout man's recorded history, this is usually the way conquering or invading peoples deal with the current inhabitants.) and more recently by ranchers moving livestock up and down the escarpment in tune with the seasons. Oh yeah, and most recently by half-crazed hikers. . .

I was a decade and a half younger when I pinned this trail on my map, but I've never quite gotten it out of my mind.

Though primarily a National Forest trail the lower trailhead is located just there on the north side of the Oliver Lee State Park Visitor Center. And if you remember from the previous post, that's where I just happened to pull in and grab a campsite this morning! 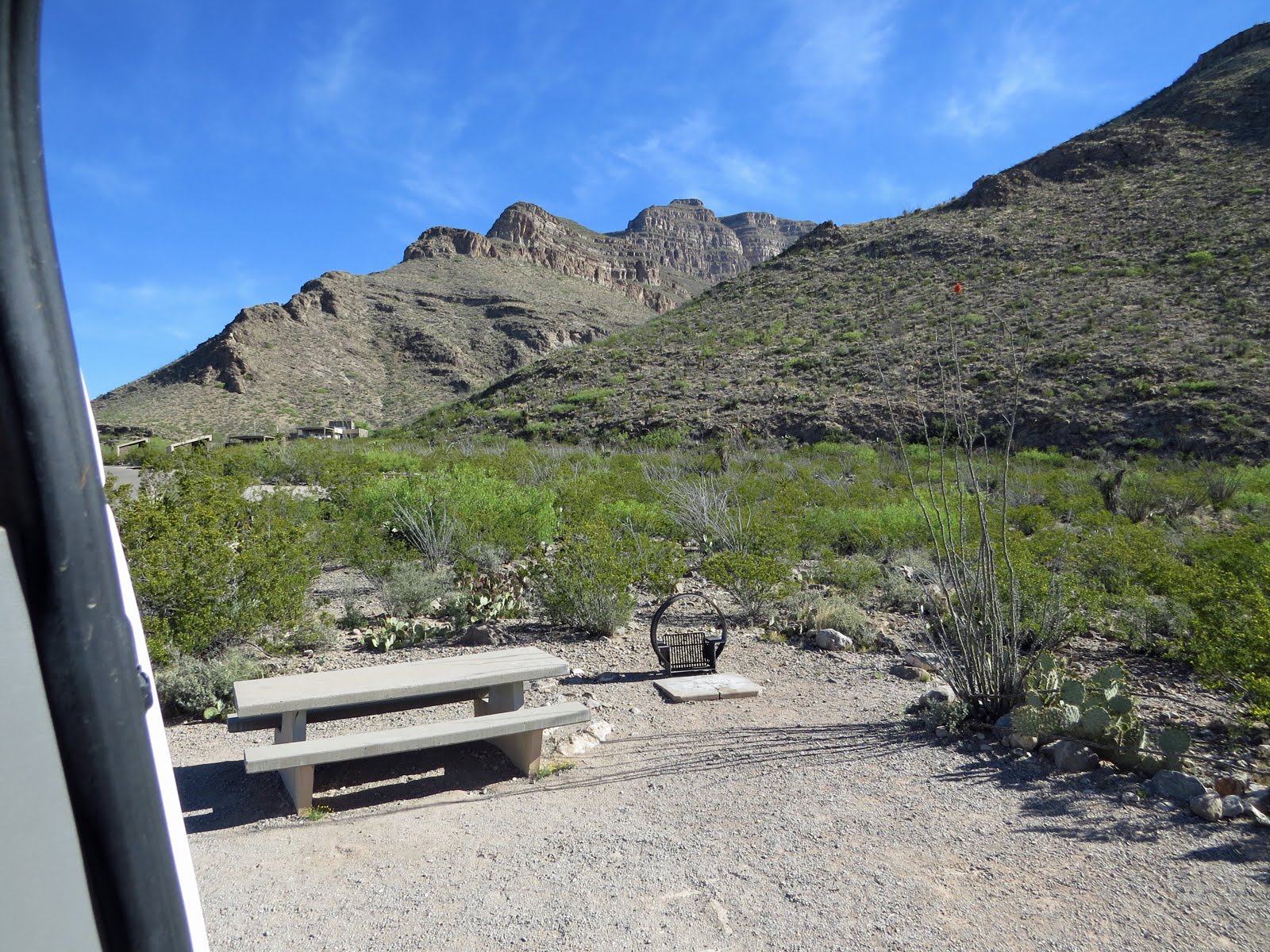 So why not climb aboard and we'll check this one off my list!

The Oliver Lee Visitor Center, where the trail starts, is that bit of rectangular cluster there above the center of my picnic table. Right there at the toe of the slope that continues up and out the top right of the photo. 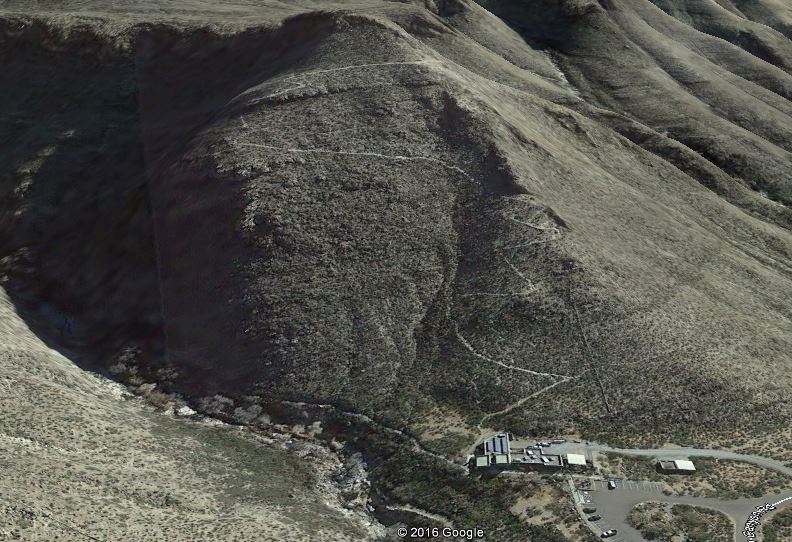 In fact the trail switchbacks right up that ridge-line and initiates the hiker quickly as it climbs 600 feet in the first 6/10th of a mile. 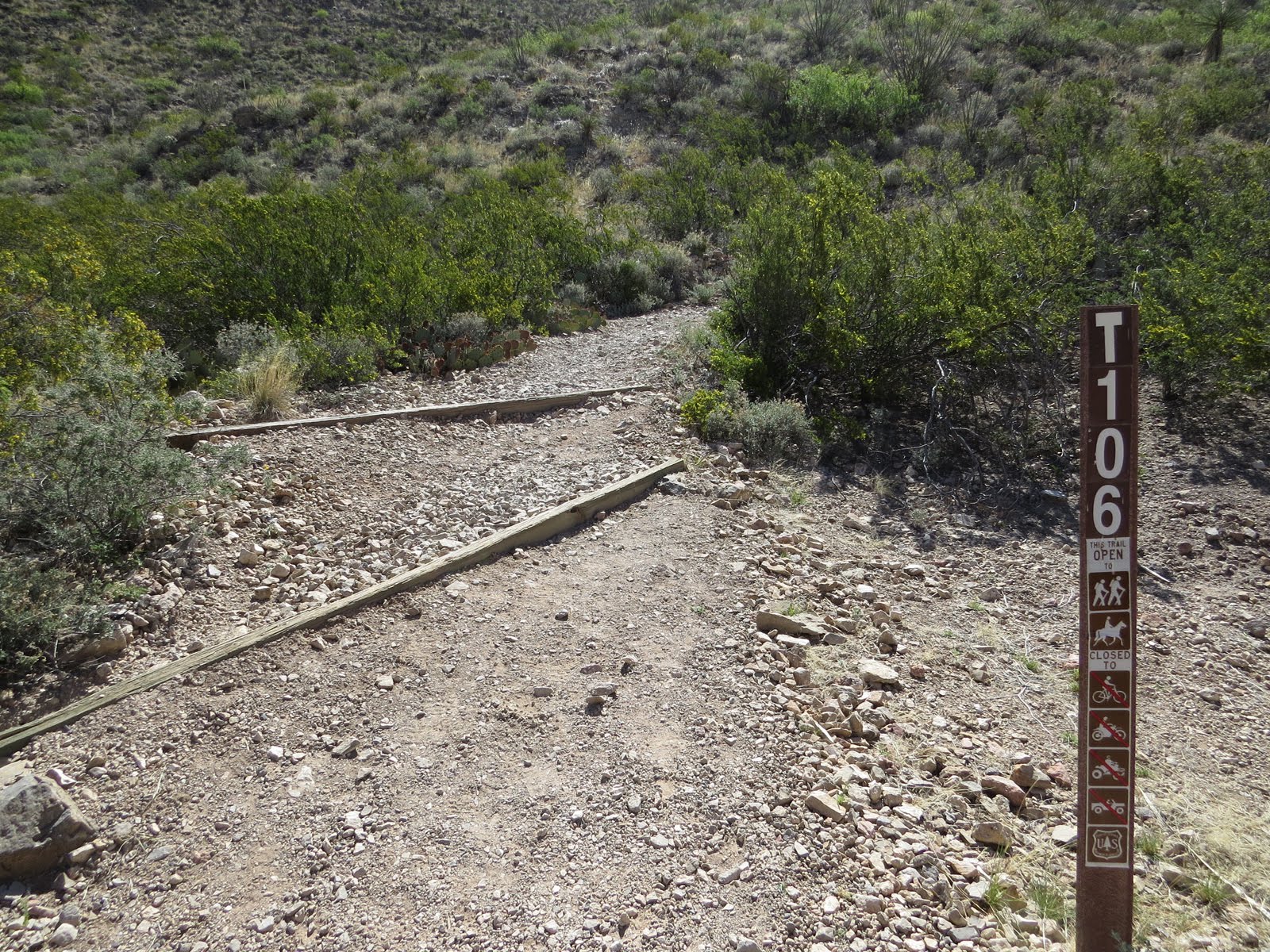 So if everybody has their gear on let's go!  It's already after 10, a good 3 hours later than I normally hit the trail so we better get a move on! 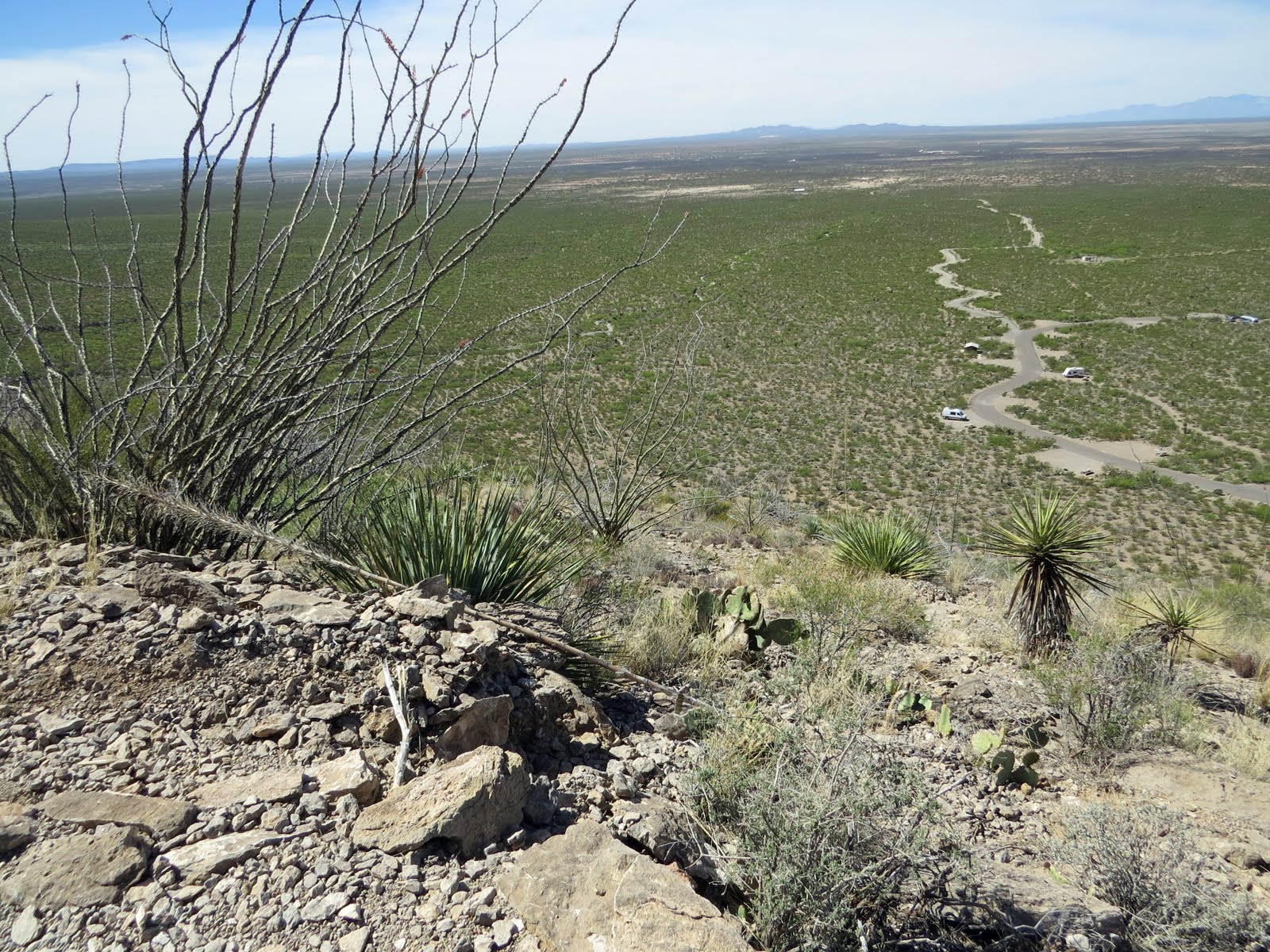 Whew! (Huff and puff.) This is quite a workout! Like climbing a nearly endless set of stairs, one with few actual steps, plenty of loose gravel and no handrail!

Hey look!  There's The Van down there in site 33!   But enough of pretending to gawk while I'm actually sneaking in a rest period, let's get a move on.. 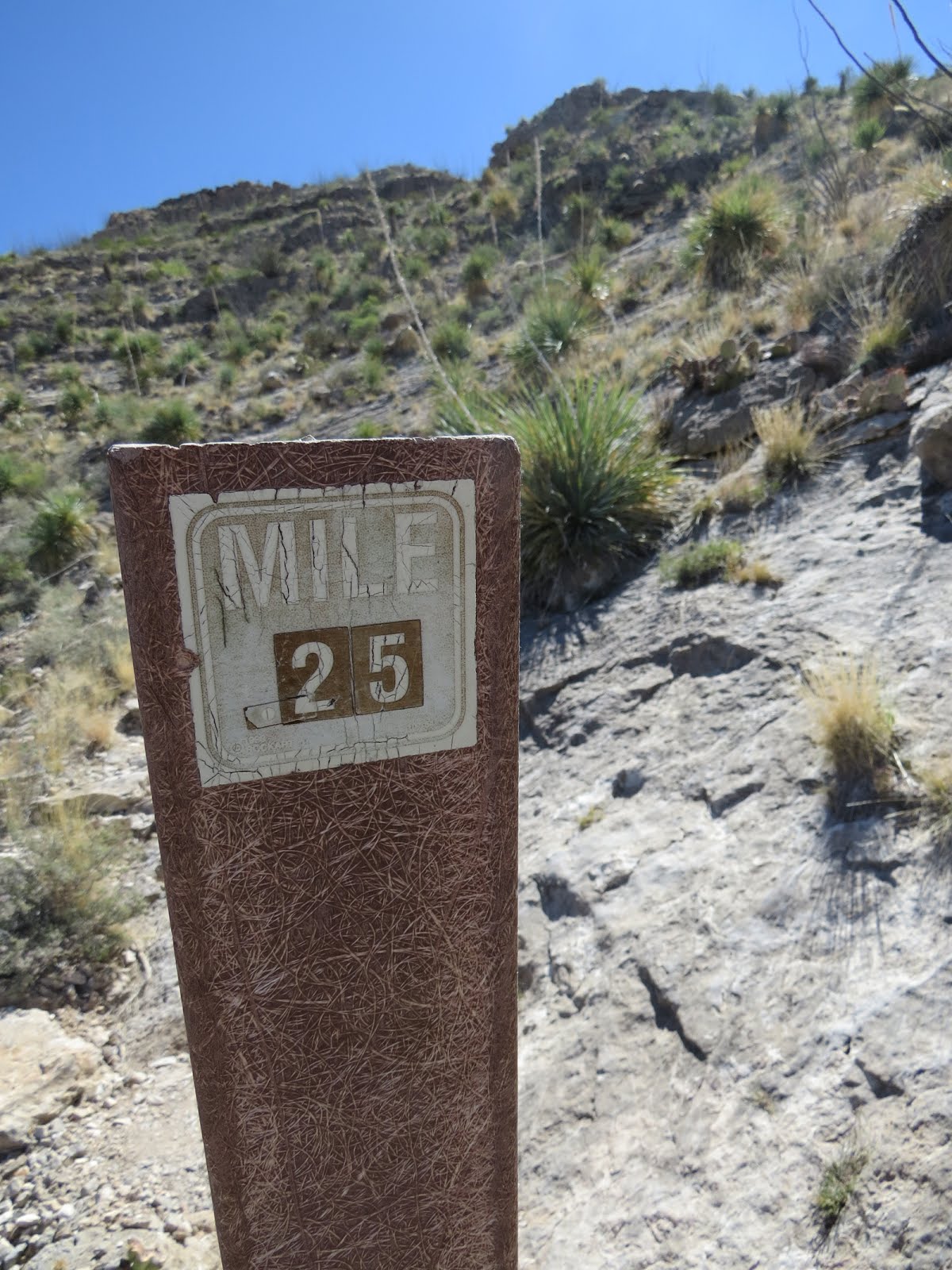 What!! Oh you have got to be kidding me! We've only come a quarter mile?? 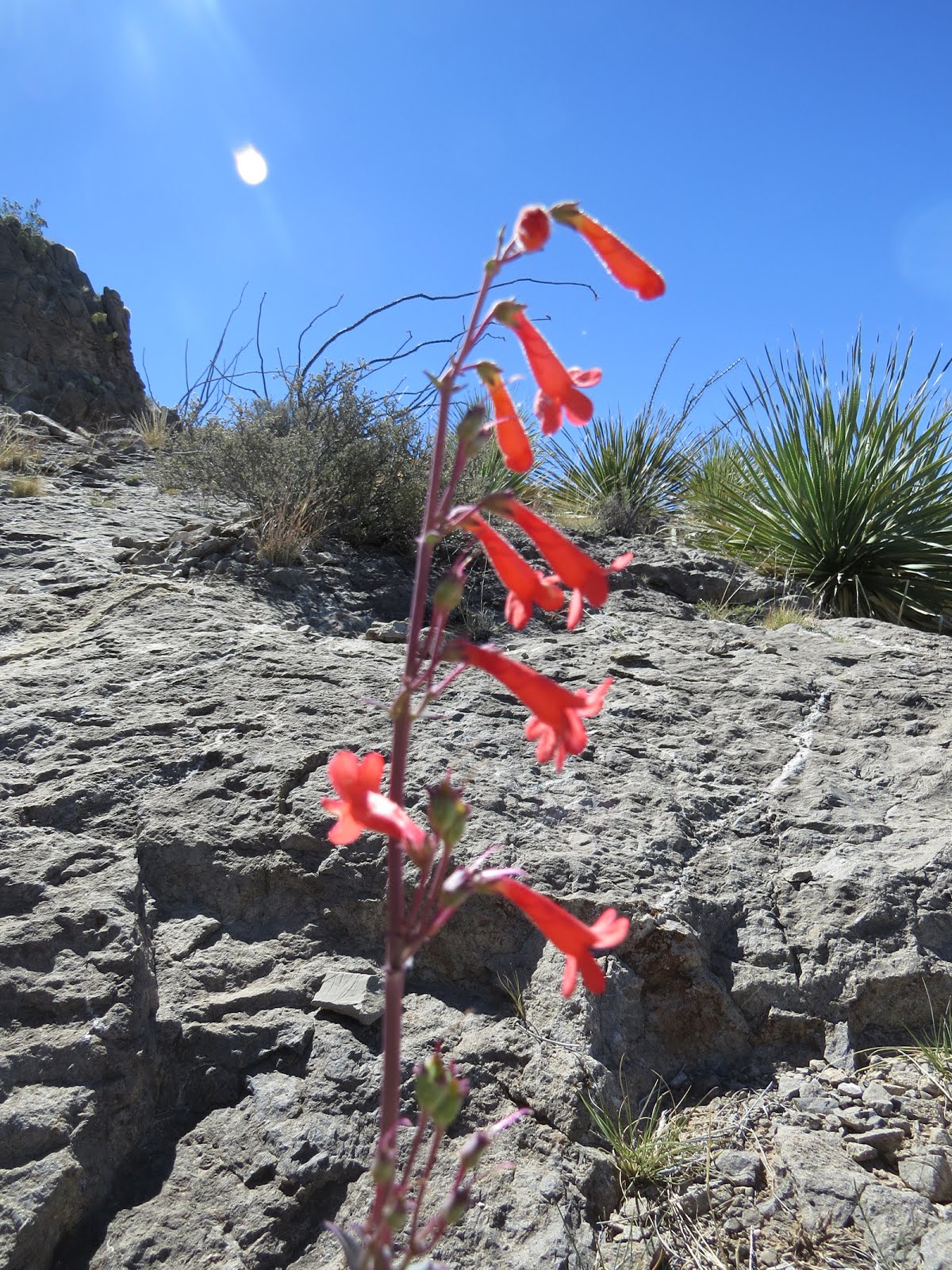 OK, don't think about how much of the mountain is still up there overhead. 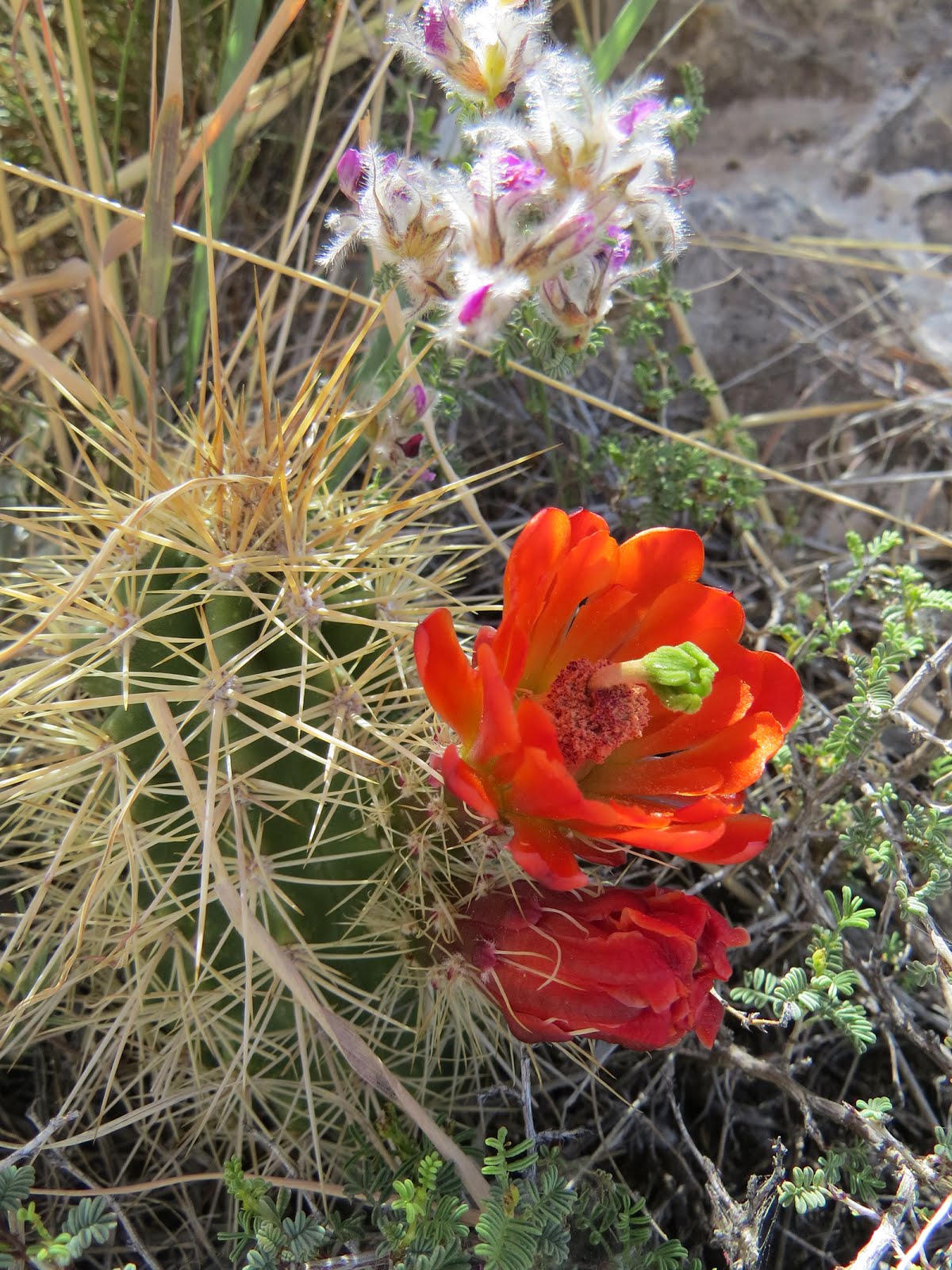 Don't think about the fact that we are already at nearly 5000 ft and based on the wheezy noise my lungs are making, dame altitude is warming up her vacuum. (True, I'm a good 4000 feet lower than I was when hiking a couple days ago, but if I don't blame altitude then I have to acknowledge that I'm never going to reach the level of 'young and virile' on the scale of physical conditioning, ever again, and nobody wants to have to admit to that!!) So just focus on the pretty flowers instead. 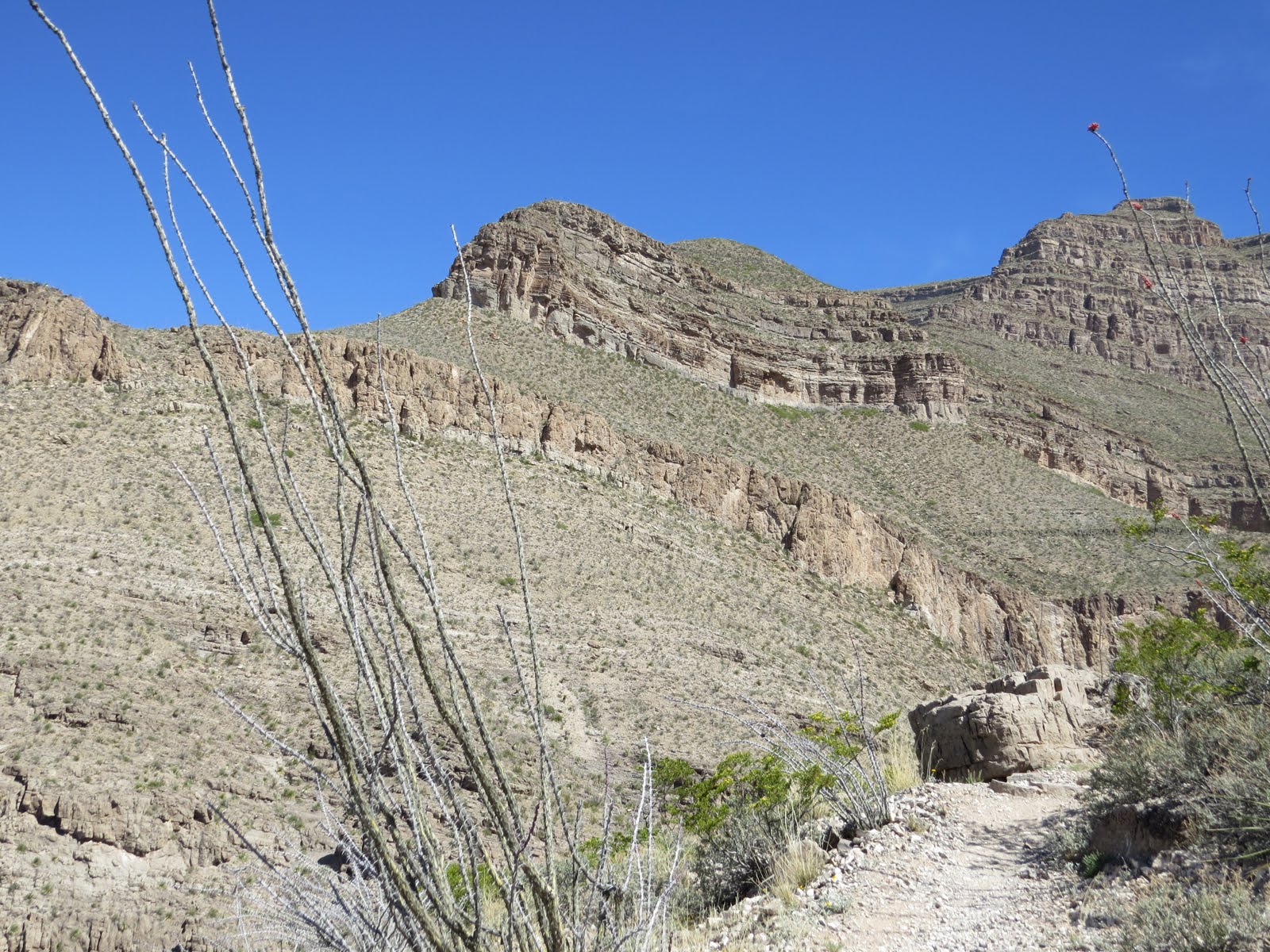 Oh man, the other side of the canyon over there looks pretty intimidating! I wonder if this side is the same way. (Nope, nope, think about the flowers!) 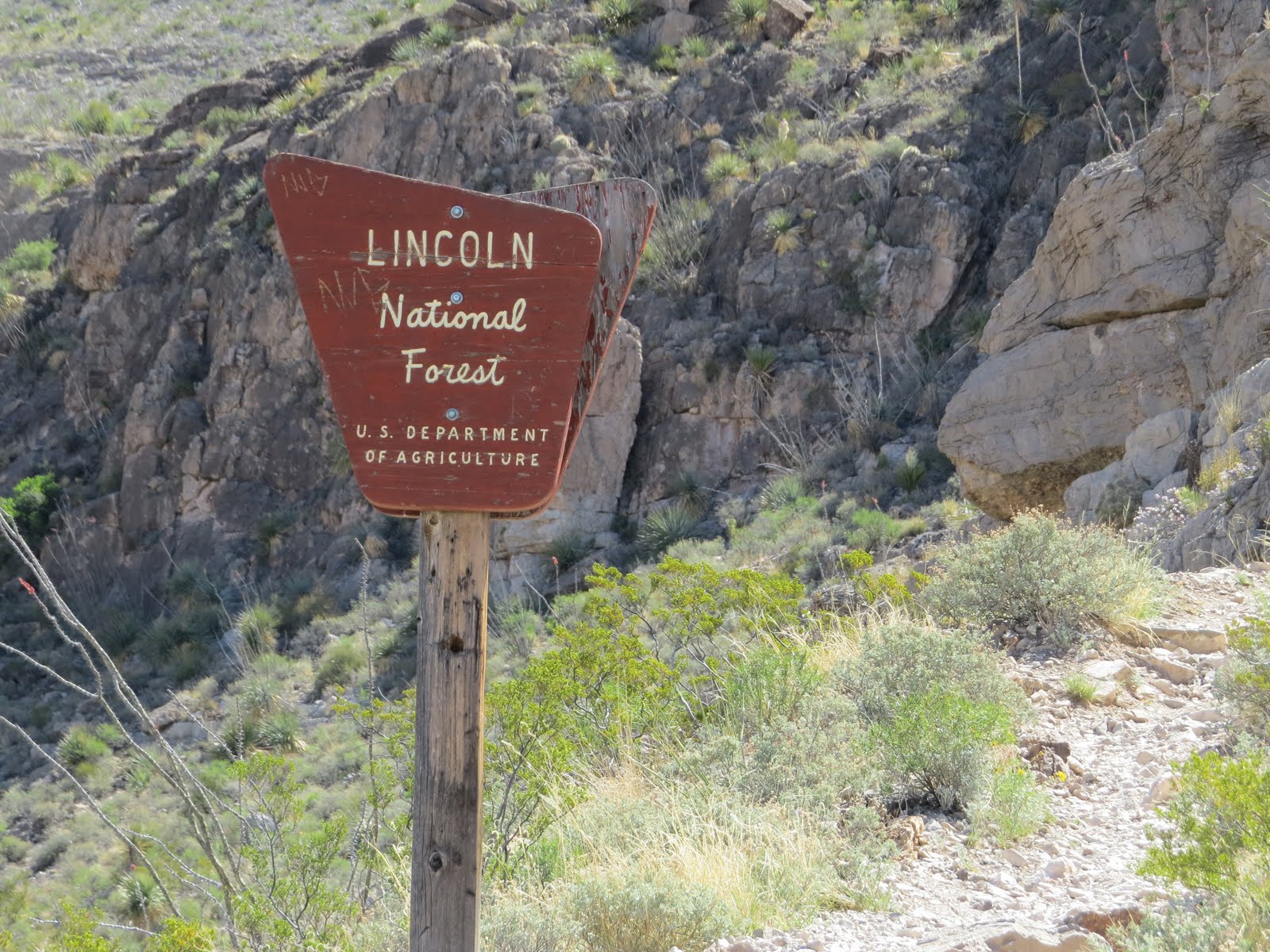 Hey, hold up a minute guys, I need a break!! 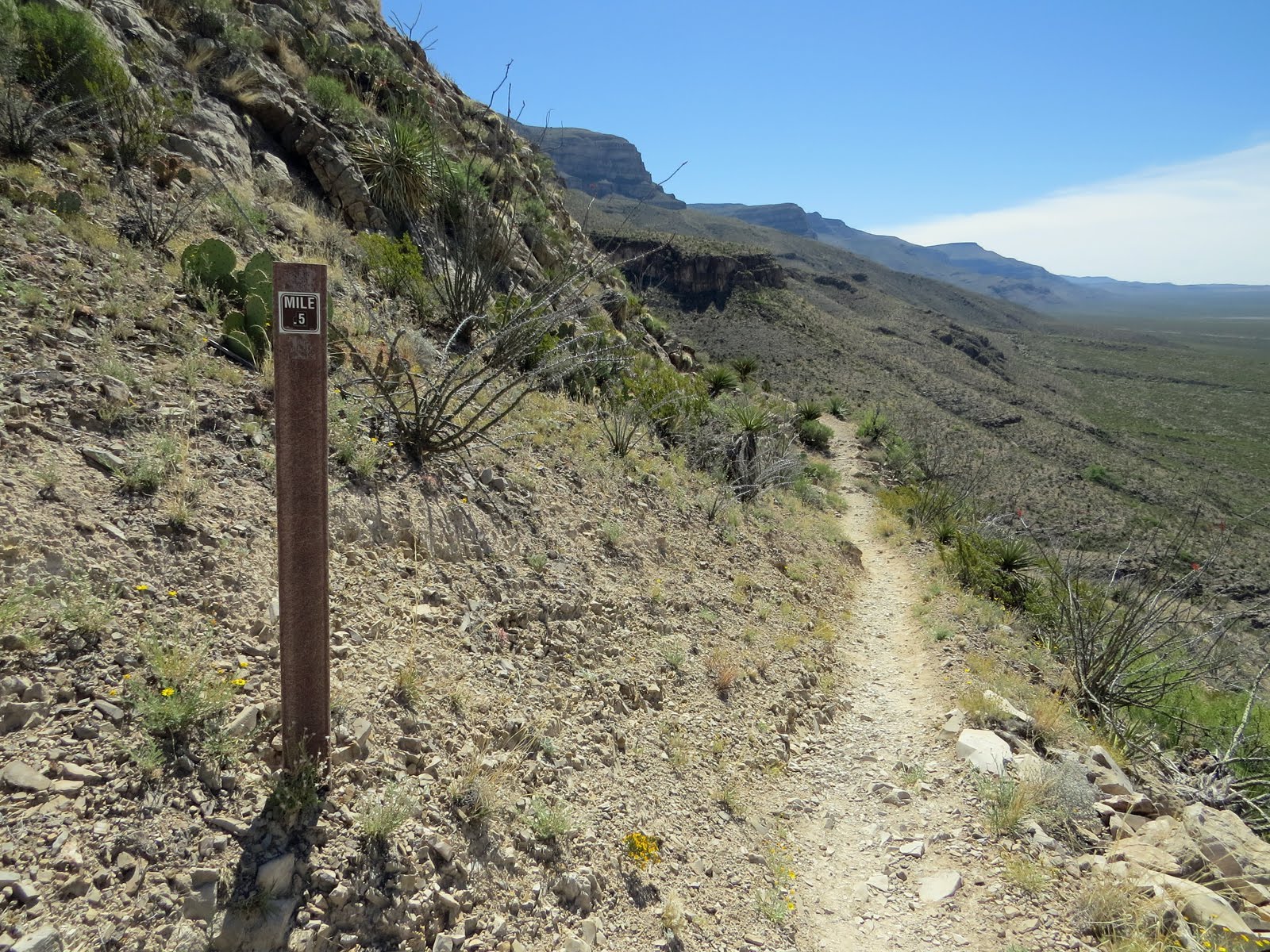 Except I can still see The Van down there just past my toes and now, after all that climbing, the trail takes a little dip getting around this shoulder of the ridge, and you just know we're going to have to recover that lost altitude all over again, then climb even higher. . .

Finally, after 6/10ths of a mile and the equivalent of 60 flights of stairs, we make it to what the trail guide calls the 'first bench' .

Only the guide is not talking about your gentrified cast-aluminum park bench reached after a civilized amble from where you parked the tricked out Lexus, and where you can sit in cultured comfort and look out on the city duck-pond, 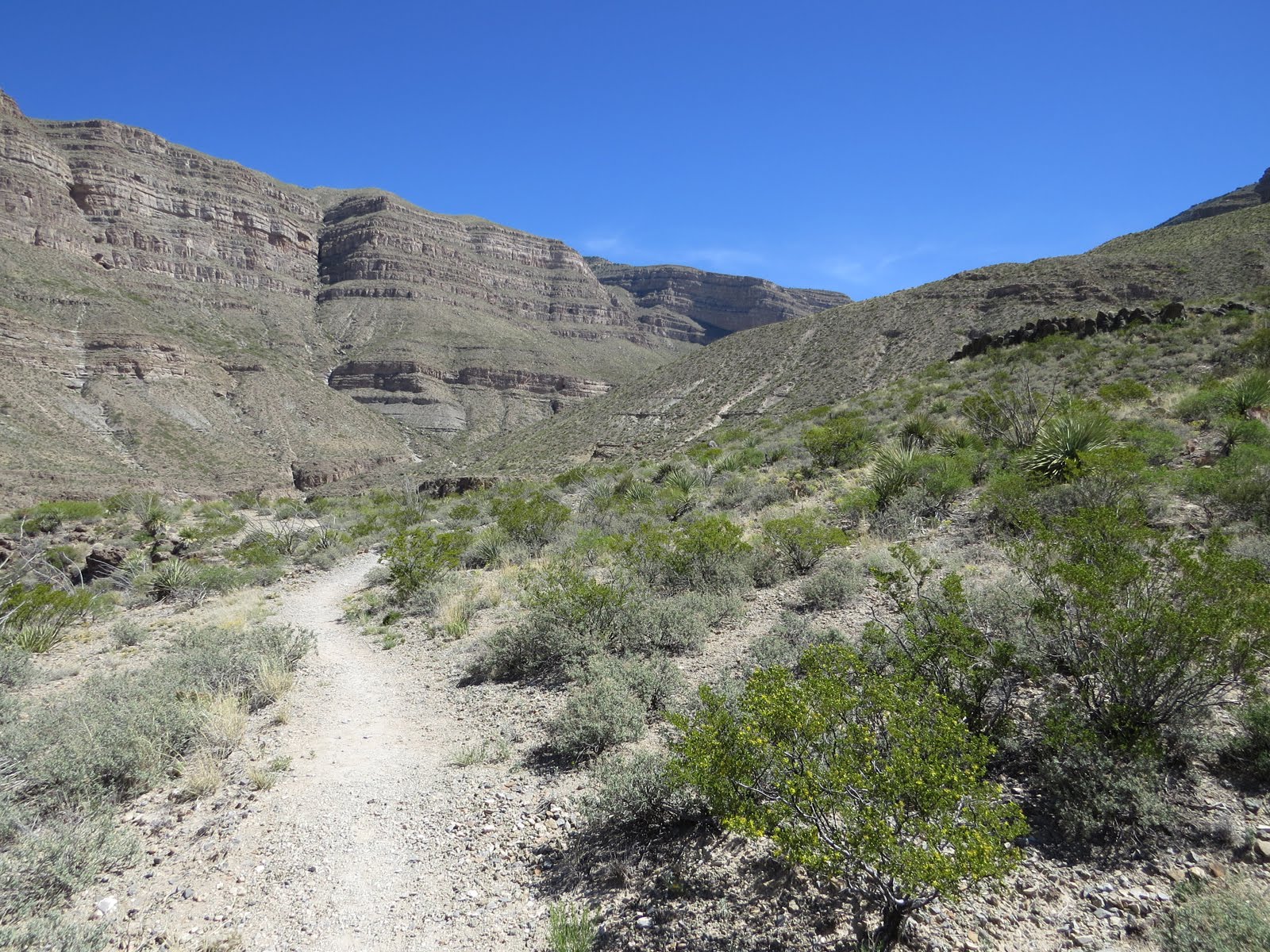 rather this bench is a kind of marginally-wide, not quite as steep but still noticeably tilted, spot hanging on the side of the canyon.  And I don't know about you guys but bench or not I really would like to sit down for a while; except everything around here is either hard or pointy. Sometimes both at the same time.

Anybody bring a folding chair?? 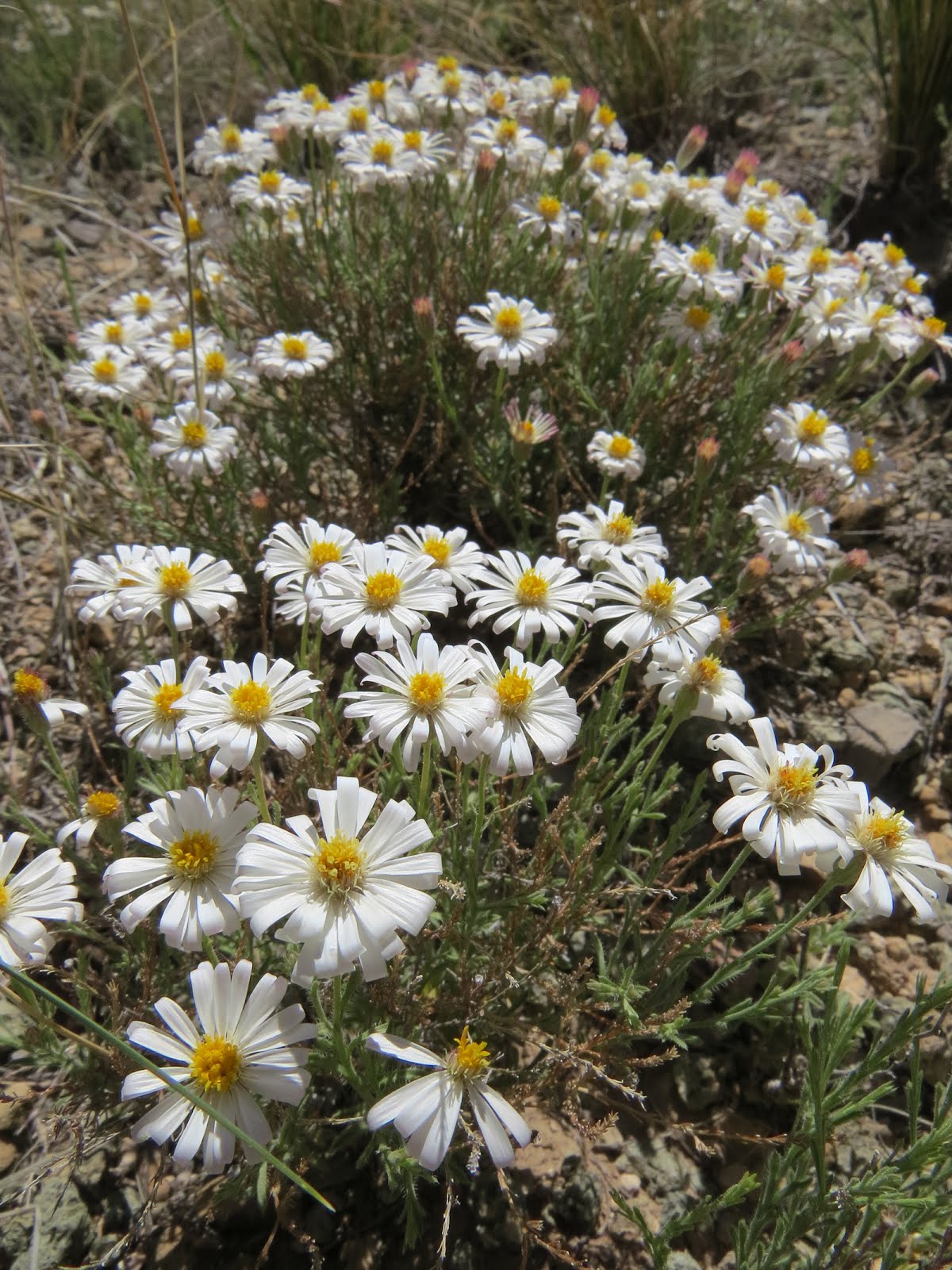 But never mind.  The walking here is easier than that first bit 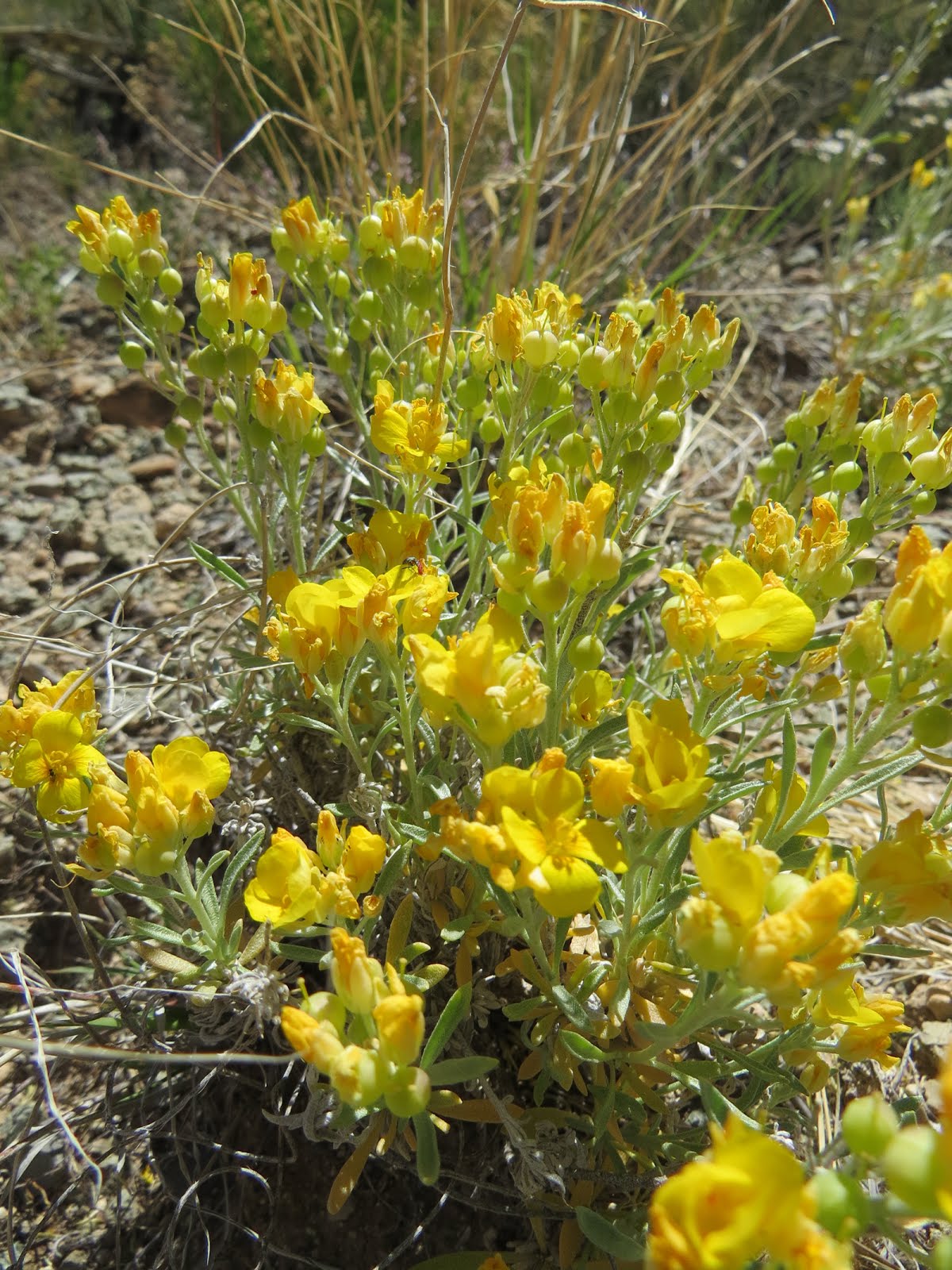 the flowers are still pretty 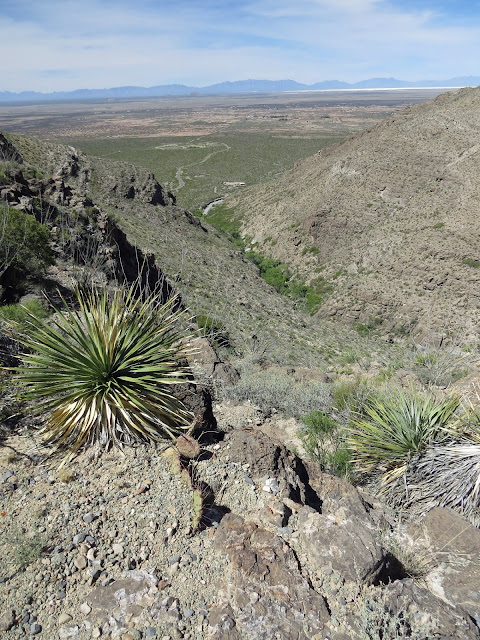 and the views aren't to be ignored either!

No, seriously; don't ignore the view because if you step in the wrong place it's a long ways down! (And after all the work it took to get here in the first place that would be a shame!)


It's hard to imagine cattle so willing to climb up what we just scaled that a fence is required to hold them back, but now I can see how they would love to spread out across this bench with lush spring grasses to keep them ecstatically occupied. 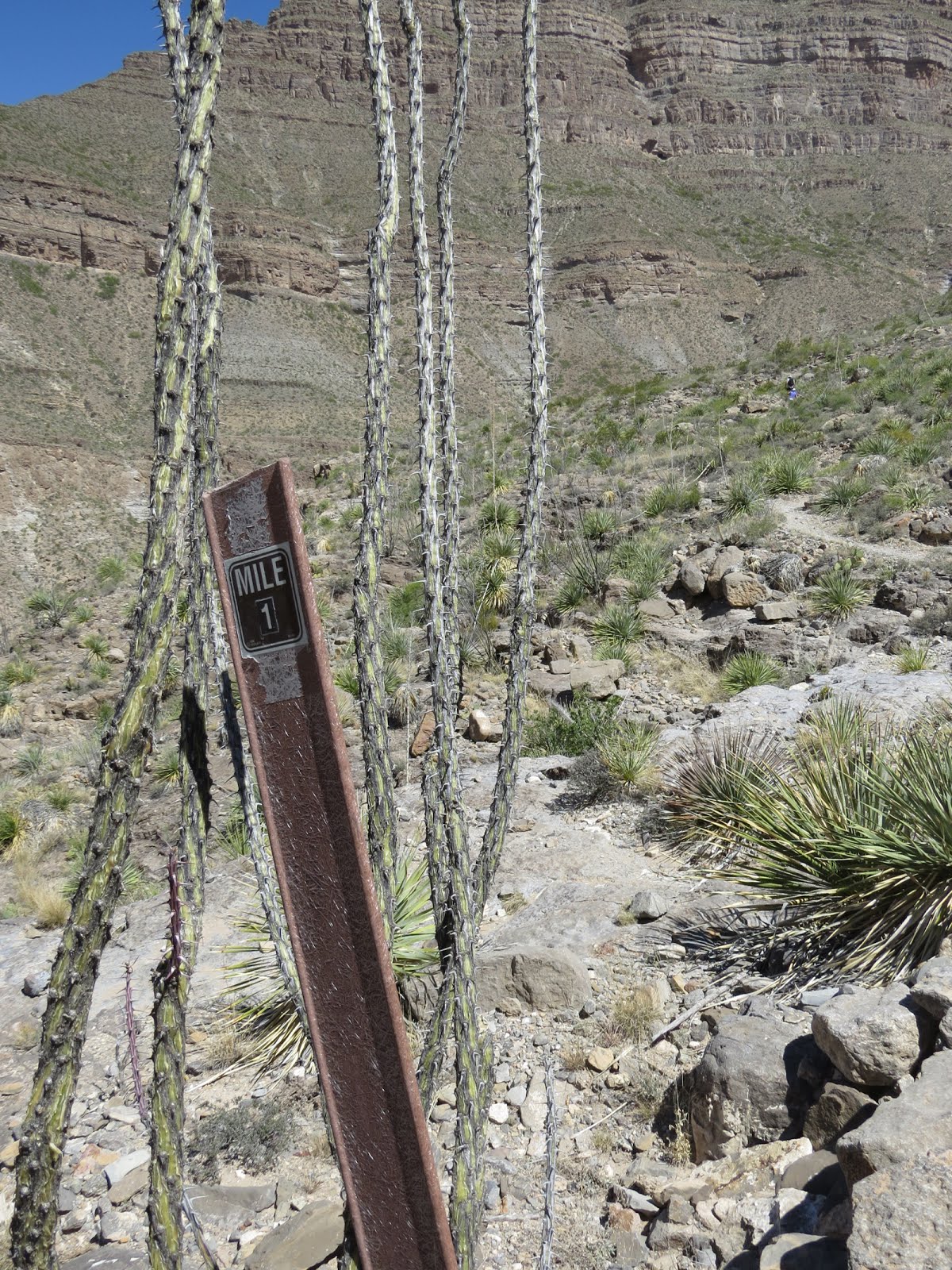 But barely a half mile later, about the time we hit the one mile mark, things are looking a bit rugged again and the upward tilt of the trail beneath our feet is becoming more and more noticeable.

And it's not long after that that the trail leads us off the other end of the bench; over on the right in this image; and around a corner as it skirts the margins of a big, water-carved notch in the canyon wall. 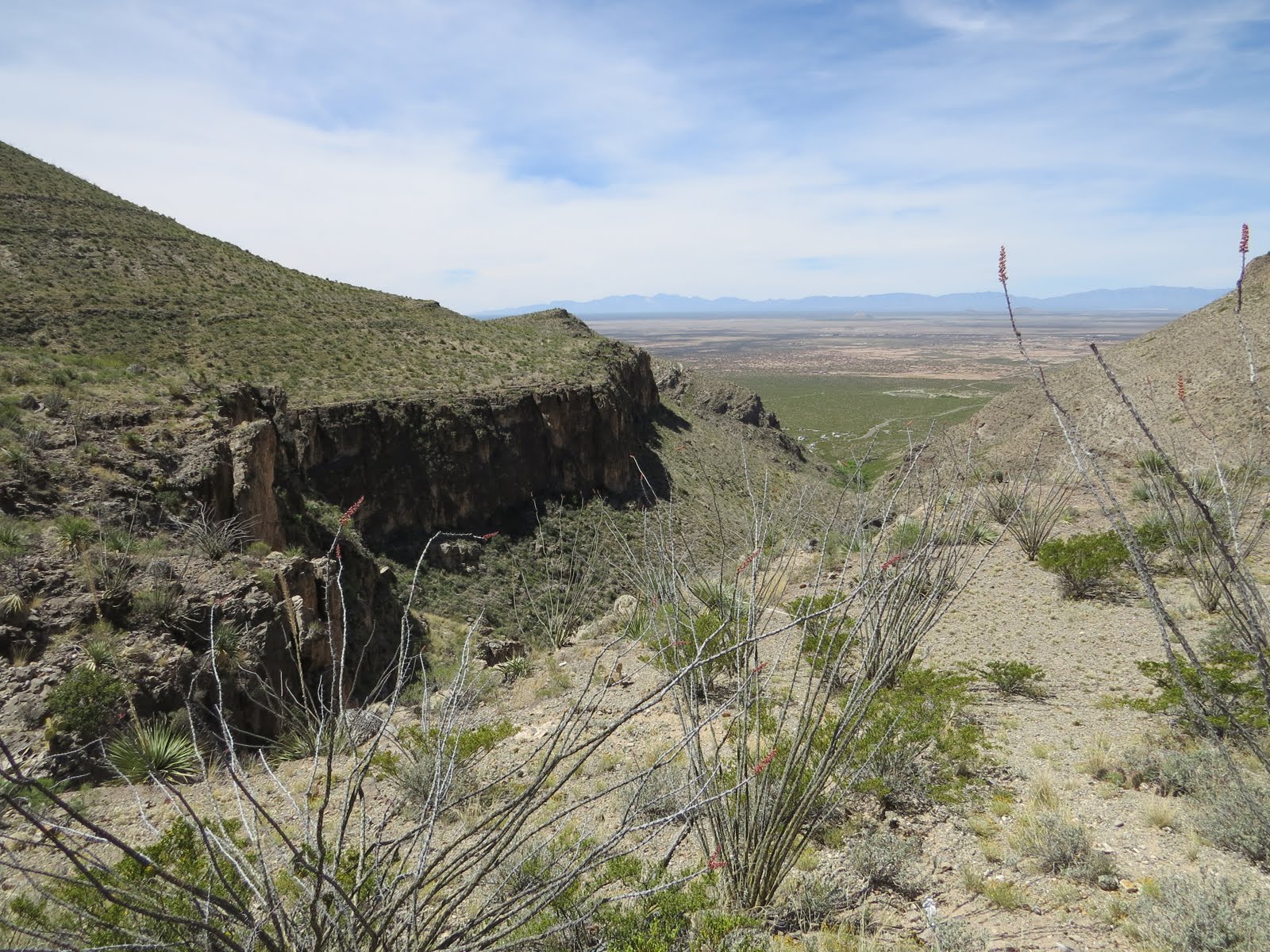 Things get a little narrower and decidedly more tilted on the other side of that notch, but the payoff is that once we're around the corner we can look back down the canyon to where we came from with the bench we just traversed there to the right of center.

Only is it just me or does the campground down there look disappointingly close considering all the effort it took to get here?? 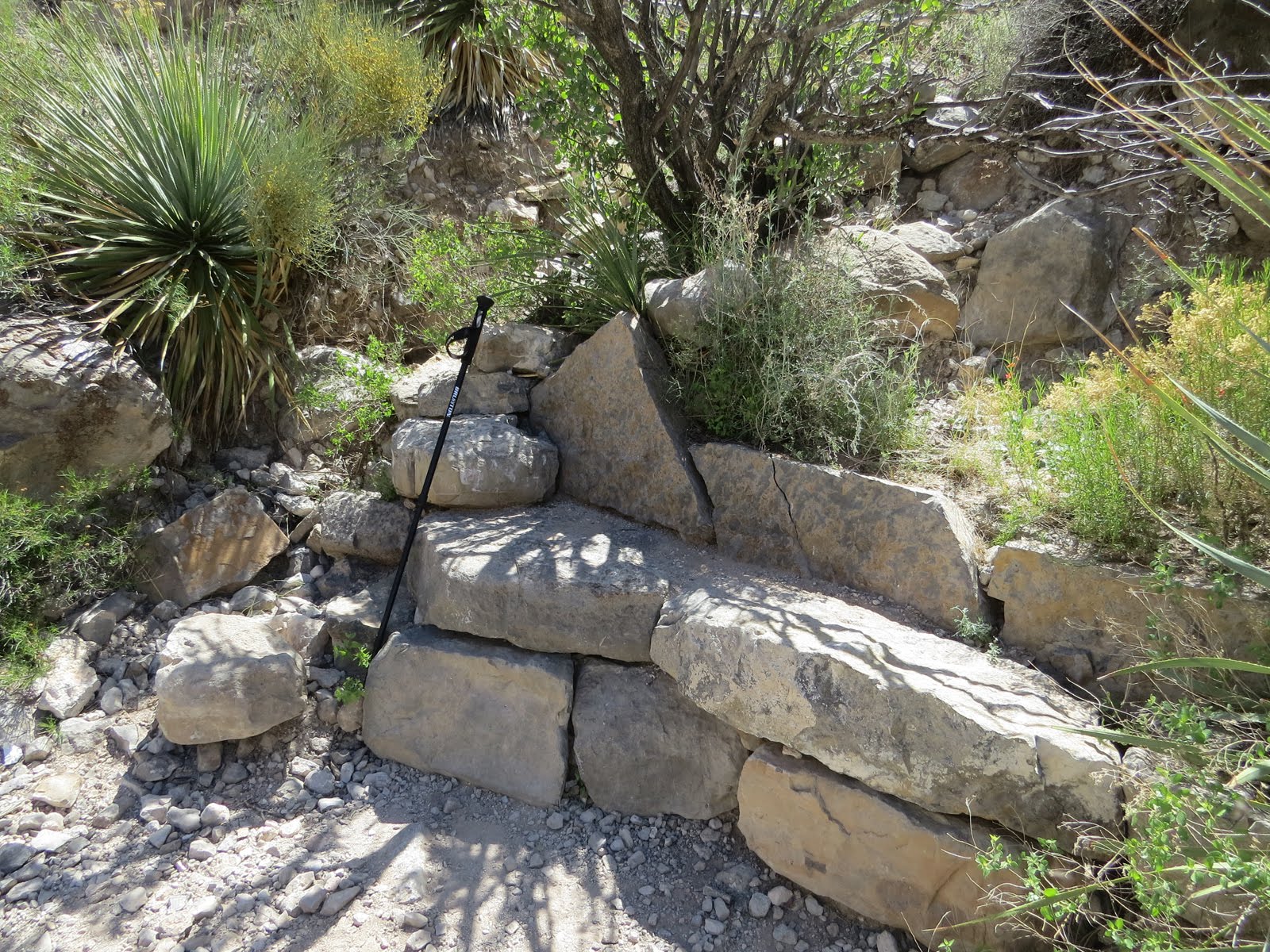 Oh wow!! Look at this bench tucked into a bit of shade!  Dibs!!! 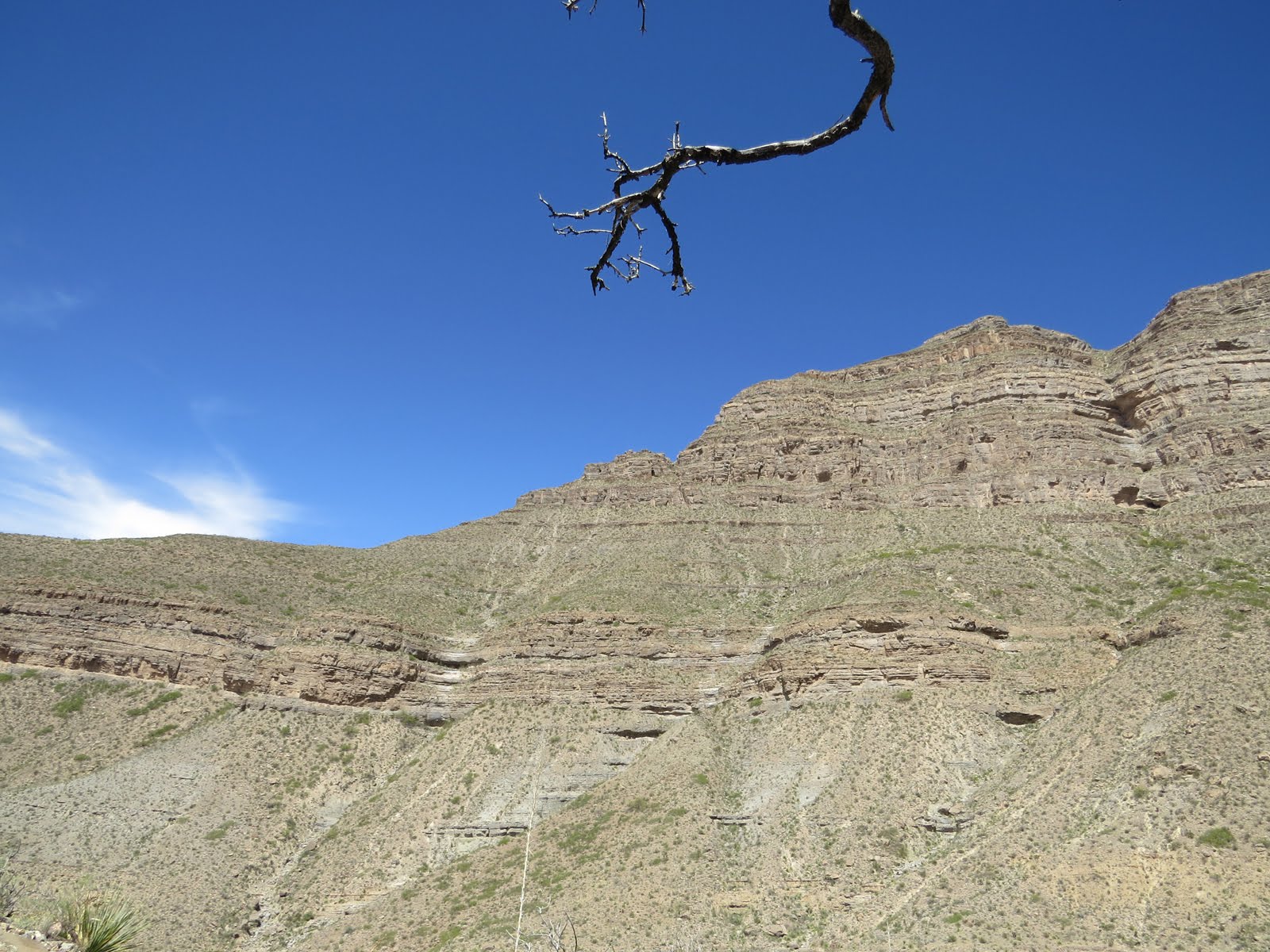 Too bad more of y'all couldn't fit on this here bench with me, but then again my view of the opposite canyon wall from here is a bit imposing, to put it mildly.  My lungs burn, my legs ache, and looking at this 'scenery' isn't helping! 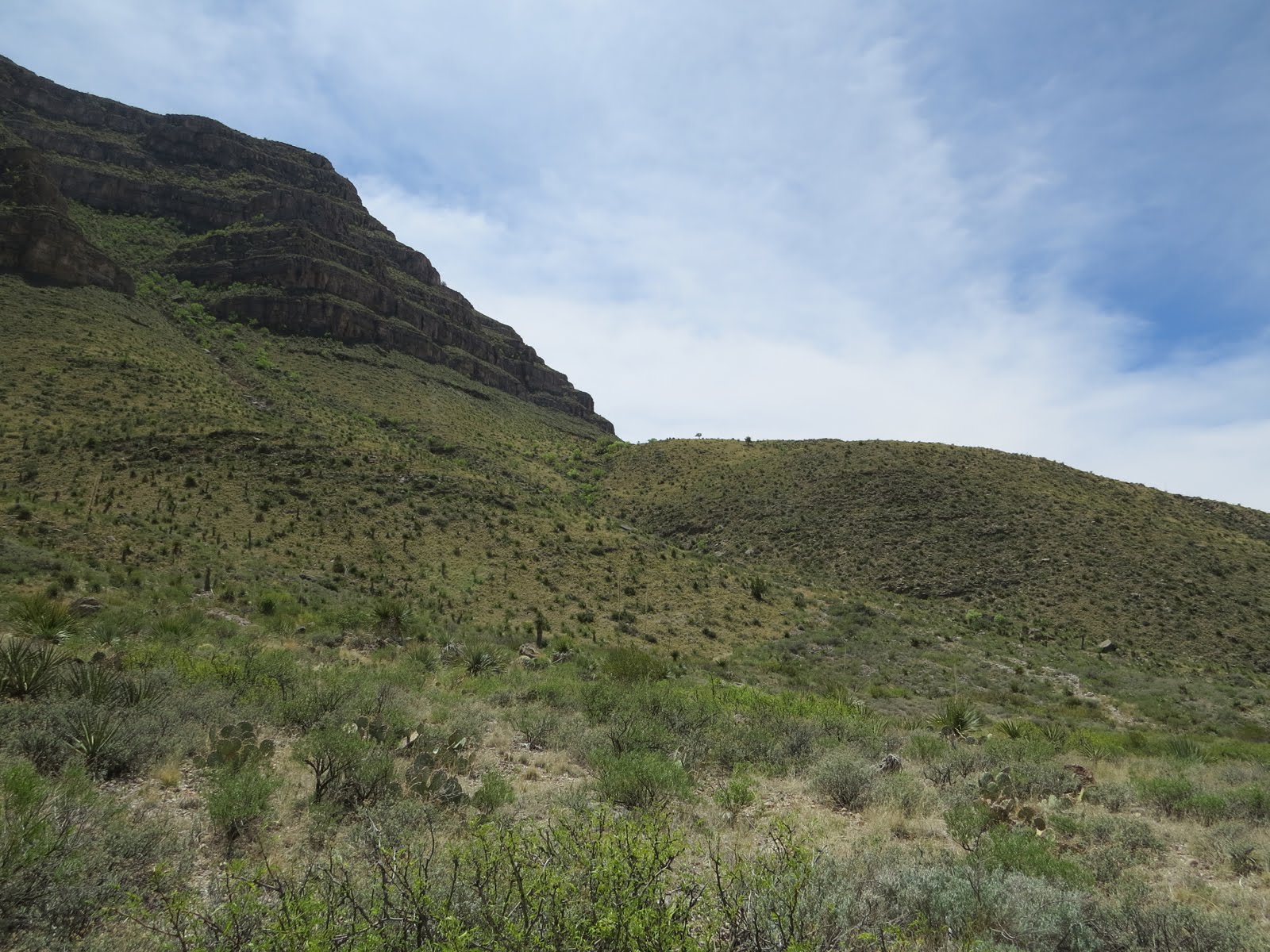 But if I turn; come on, turn around with me; and look up over my left shoulder at this side of the canyon, the north facing side sheltered from the full brunt of the sun, if we look way up there to that little speck on the sky-line where it flattens out below the steep part, (That little speck is not a defect in the image, but rather a full grown tree) 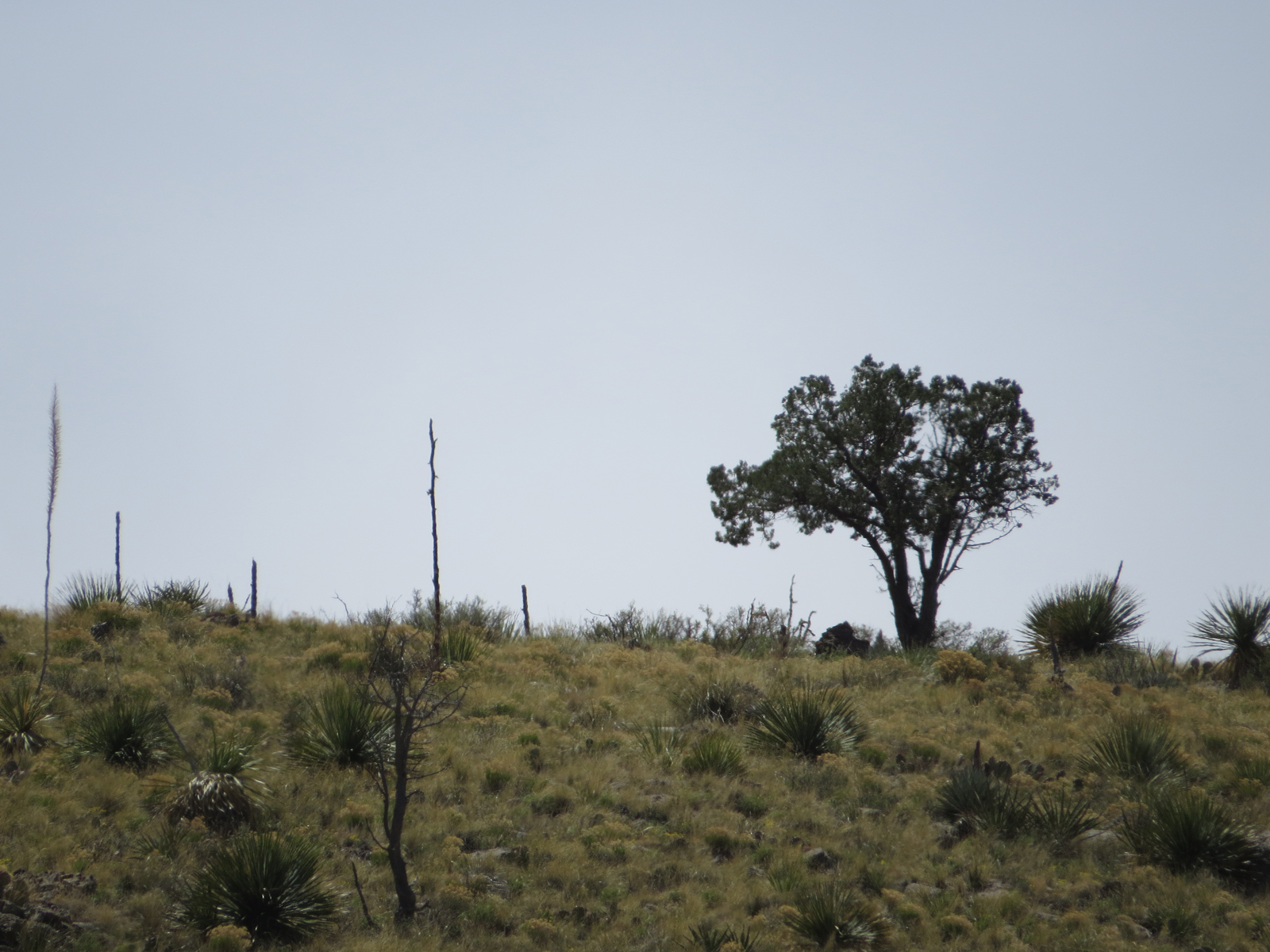 then we get a hint of the lushness that can be found up here. Now if only I could get a little of that lushness into my lungs I'd be all set!

What? You're tired of standing around watching me sit here sounding like a broken-down old boiler with a failing safety valve? OK, if we must, I guess we should get going again.

Oh man! Is this some kind of sick joke??

I know the trail guide mentions a second set of steep switchbacks that must be negotiated before reaching the next bench, but the reality of standing at the bottom looking up at the zig-zagging scar in the more-cliff-than-slope after all the uphill climbing it took just to get this far is - well, I'd say it was deflating except my lungs are already feeling pretty deflated up here at 5400 feet.

It's all well and good for a flatlander like me to sit around in a custom adjusted seat in climate-controlled comfort while driving The Van at this altitude, but to have to climb the equivalent of 110 flights of stairs to get here on my own two legs - well that's a whole 'nother story! And a punishing one at that. 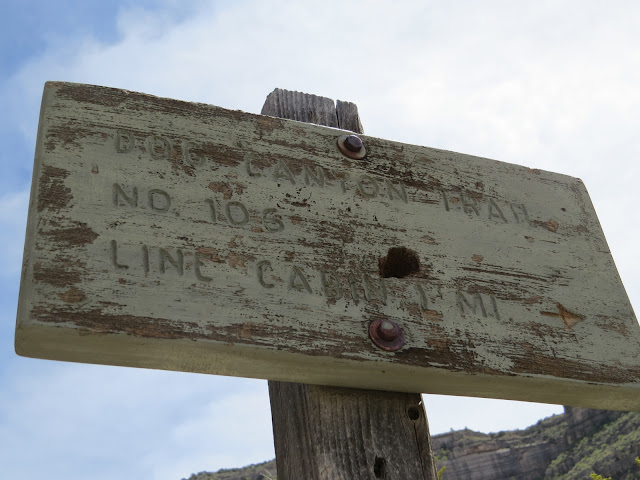 OK guys, hold up a minute.

I know we're already partway up this set of switchbacks, but on one of the many forced rest-stops in the past few hundred feet I took a look at the time and holy crap! it's already 2PM and we still have to get back down off this mountain! If our pace down is the same as the one up, then it will take us until 6PM and that's getting close to dinner time!

And look, there's a signpost! (It says the line cabin ruins are still a mile away.) I'd say that's a sign (Oh stop groaning at my bad pun, we're all in this together.) that we should concede that the smart thing to do at this point is call this our turnaround point.

Yeah I know it's more a retreat than a turnaround, more a capitulation than a strategic decision, but do you have to rub it in??


OK, if you must, then call it like it really is; the mountain well and truly kicked my ass; but that doesn't change the fact that it's time to snug up the boot-laces good and tight because there's a whole lot of downhill ahead of us! 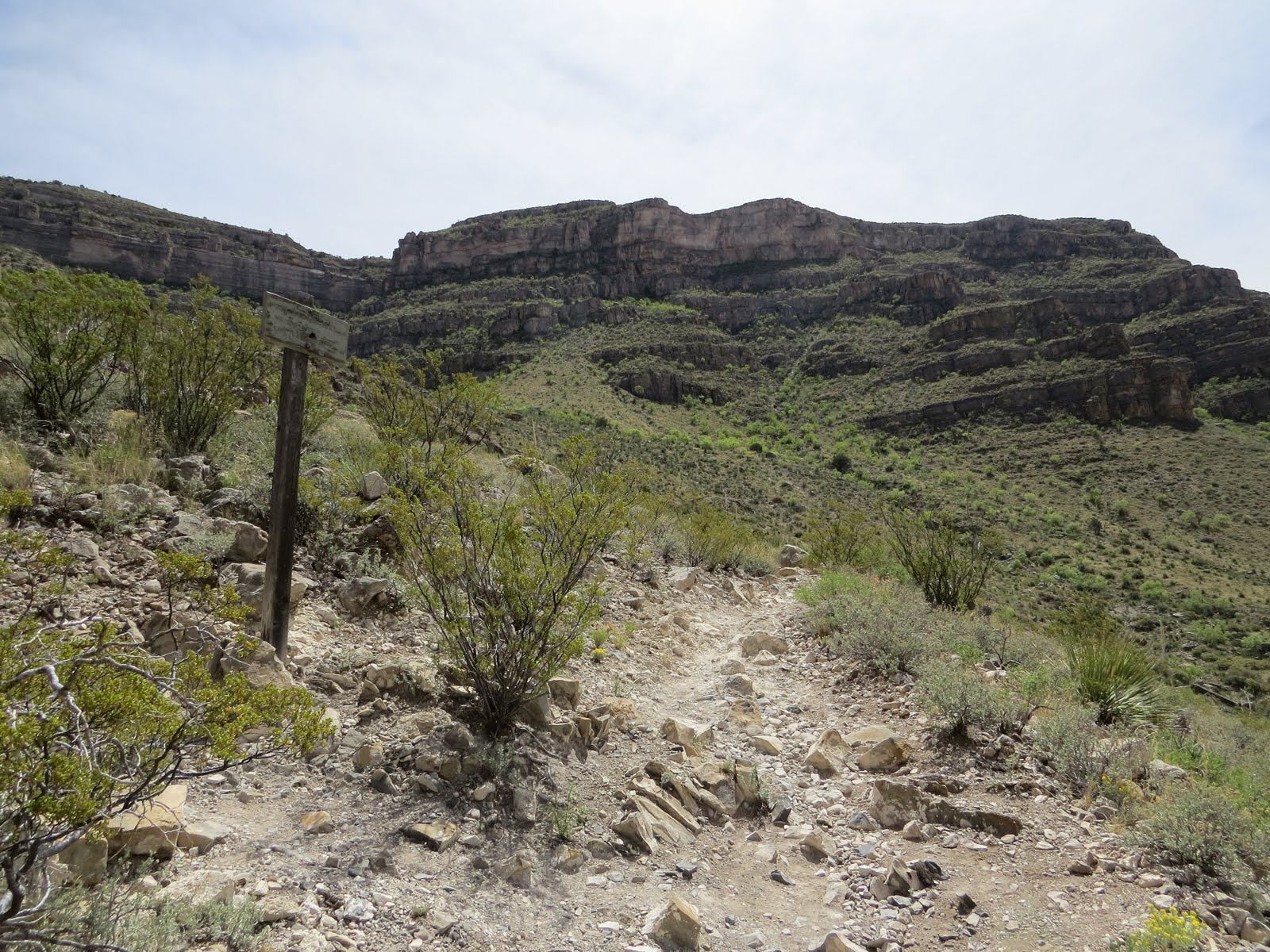 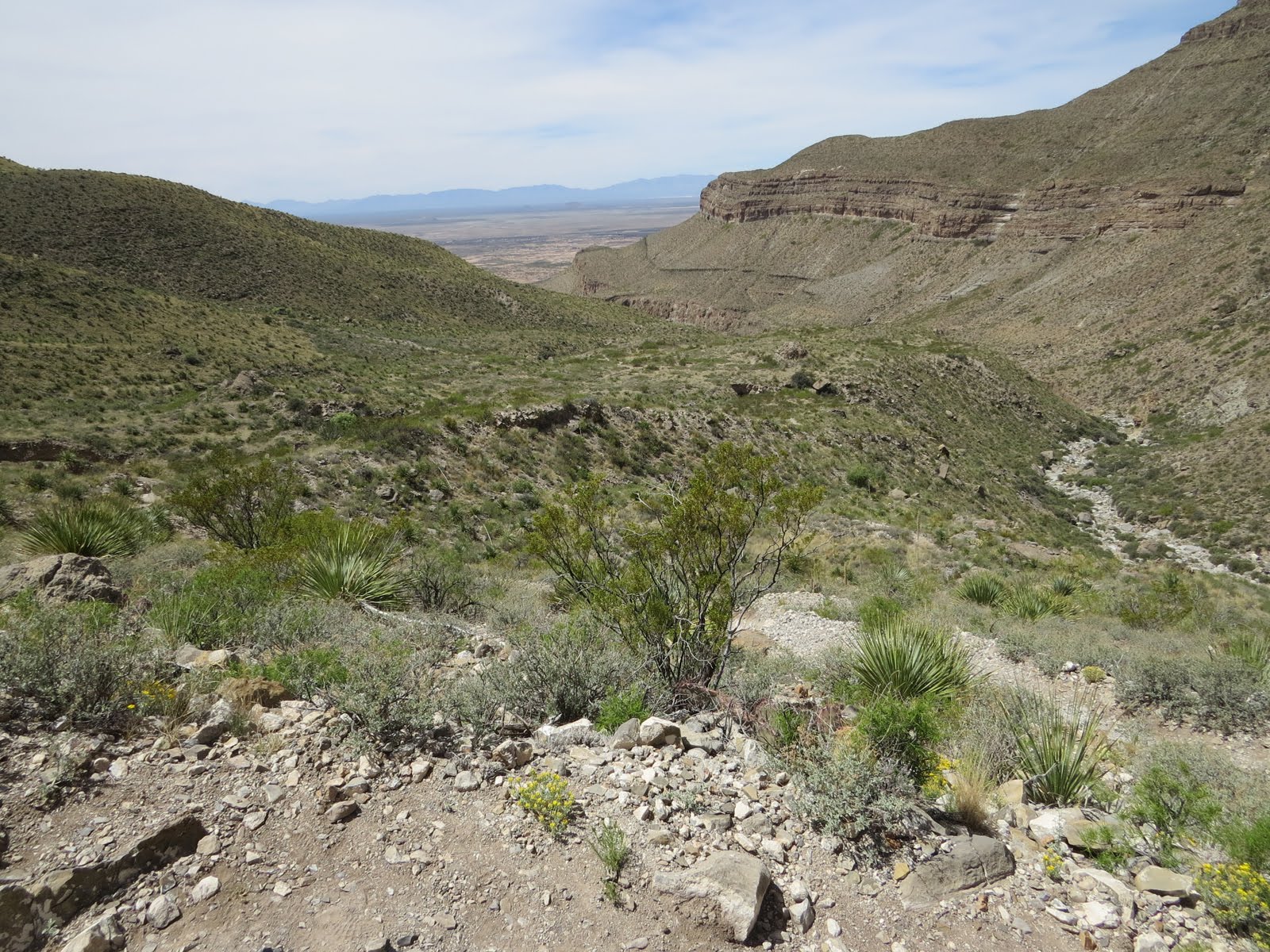 Boy! I probably shouldn't have turned around and looked back down the canyon. The basin sure is a long ways away when you look at it from here. My knees are already hurting just thinking about all that downhill! 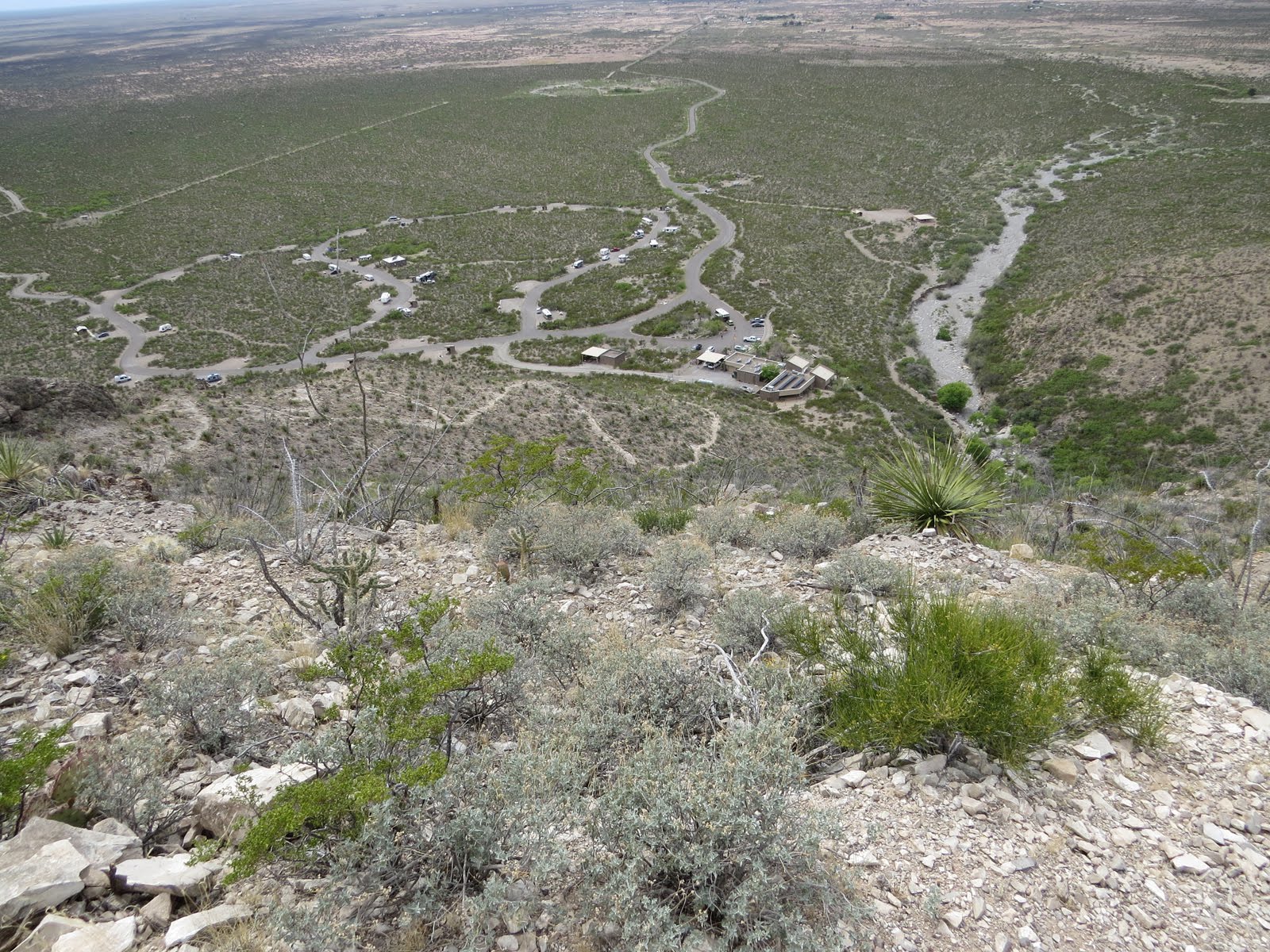 Hey guys!  The good news is that the campground is finally in sight! The bad news is that it's still a long ways down there and my toes are already killing me! Hopefully this is the last time I'll forget to trim my toenails nice and short before embarking on a toe-jamming downhill marathon of a hike. 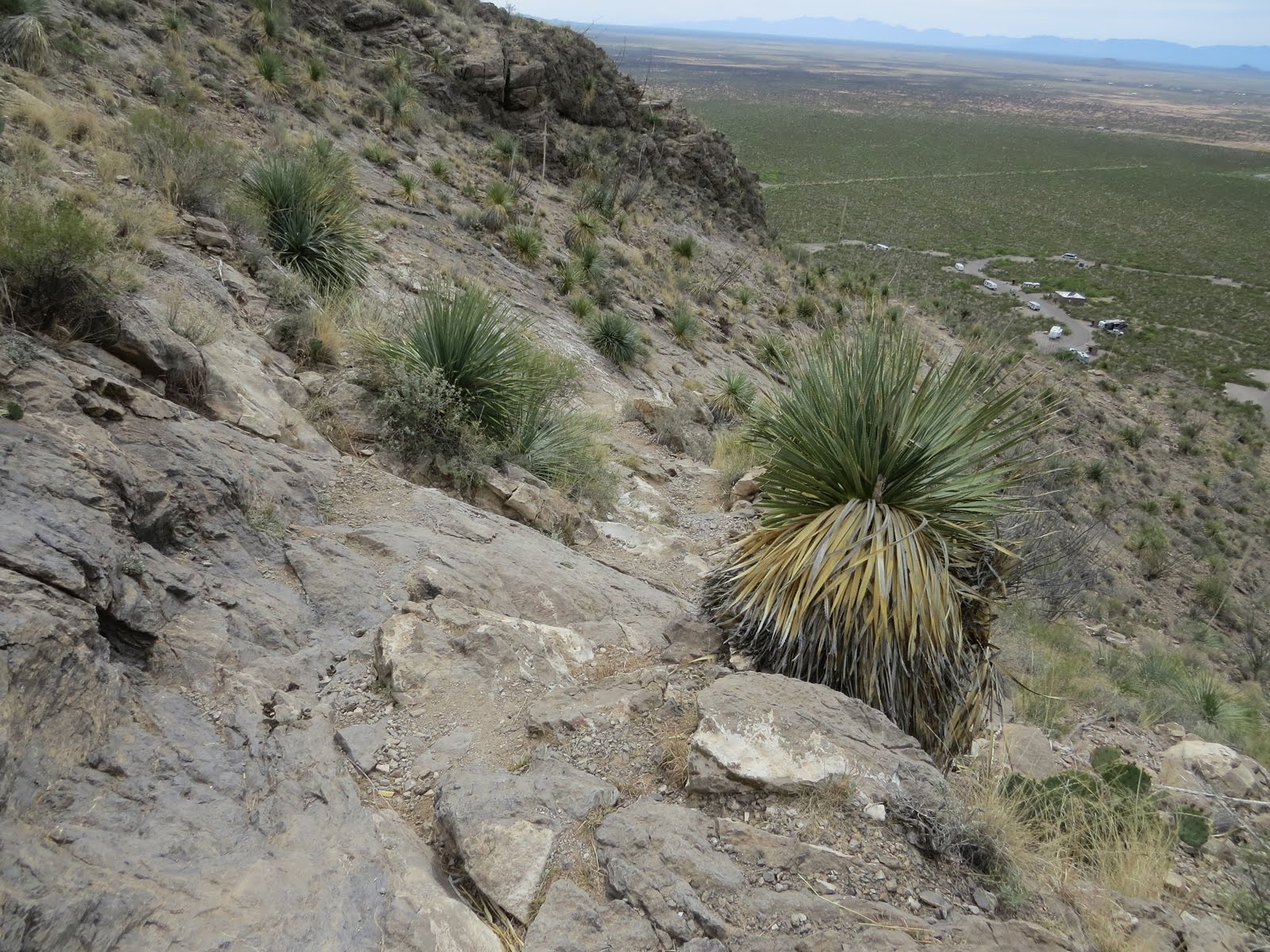 Oh man! I can already tell this bit of trail is going to hurt; but take heart. We're getting closer! (At least that's what I keep telling myself. . .) 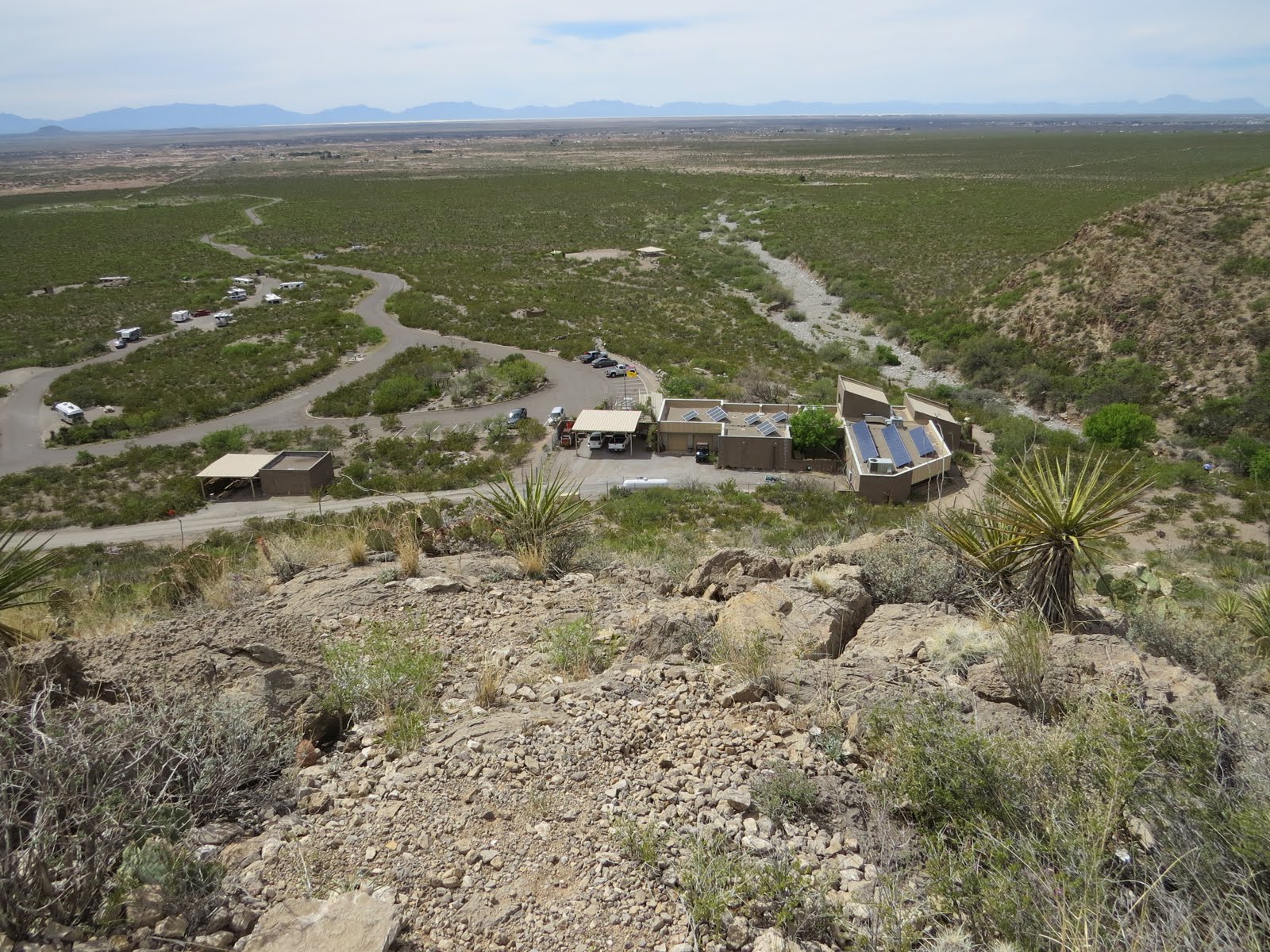 Almost there guys!  A couple more switchbacks and we're done! But first we should probably rest up a little. 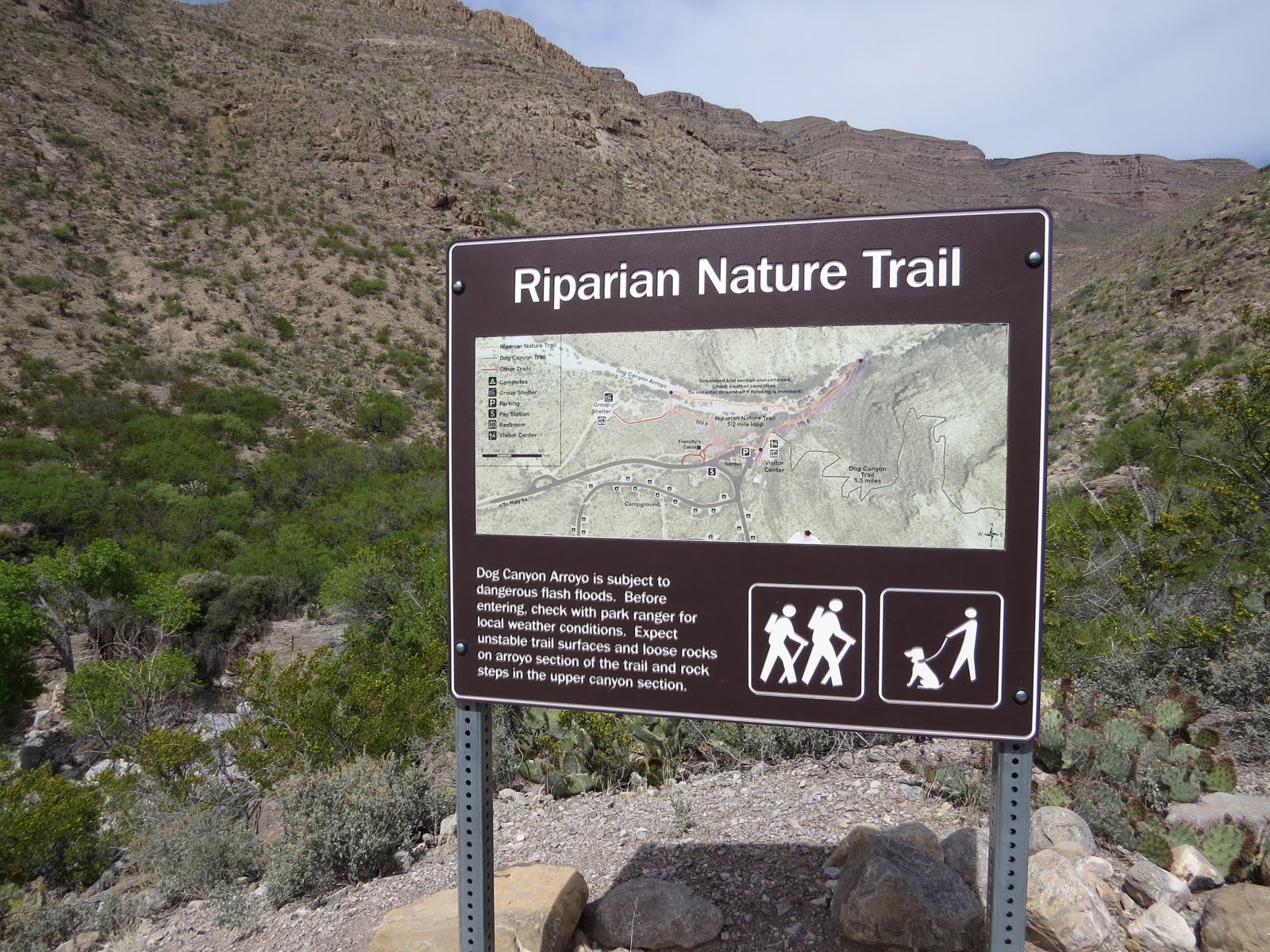 Yea! We made it! Back on flat ground.

Oh look. I wonder what this Riparian Nature Trail is like.

We made good time on the way back so maybe we should check it out.