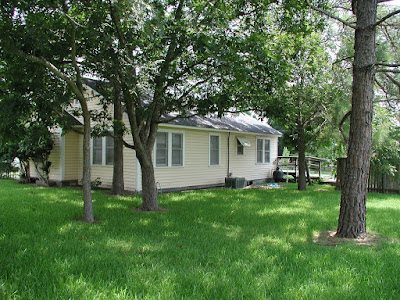 At one point in our lives we lived in a 50's era house on the edge of a small town with just shy of an acre of nicely groomed land.

I was away at work all week (As in away, since it was too far to commute daily so I lived in the parking lot at the office.) and my weekends were focused on building the barn/living-quarters 30 miles away on our 14 acres.

When we first bought the house the yard had been neglected so we hired the realtor's high-school son to come over and mow, but oddly enough my wife, freaked out by spiders especially, and bugs in general, and phobic about walking on anything other than pavement or groomed gravel, decided she kind of liked the idea of mowing the grass.

That's how we ended up with a Dixon ZTR 42" deck mower. Turned out to be a great choice. She loved zipping around the yard on that thing, spinning around in it's own length, and especially the part about being able to just jerk the handles backwards to instantly back up. (Comes in handy when you see a spider web inches before you run into it!!) 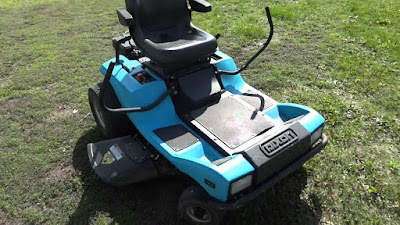 When it was new the mower looked about like this. 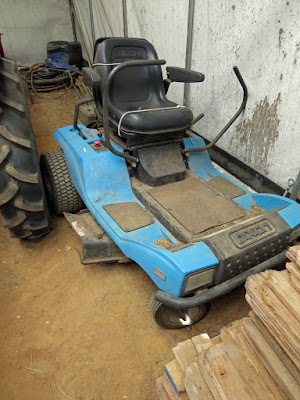 That was 13 years ago and the mower looks more like this now.

Not bad, but the seat cushion is held on with a couple ropes, the grass chute has been smashed off, a few tires have been replaced and I've taking a long steel pry-bar to the front bumper to bend it back up where it doesn't interfere with the front castors.

Oh yeah, we still have the mower.

Even though the house on the edge of town is gone, even though we no longer have a billiard-table smooth yard to mow, even though the suspension-less beast will beat the crap out of you when carelessly zipping across our fields, we still use it. 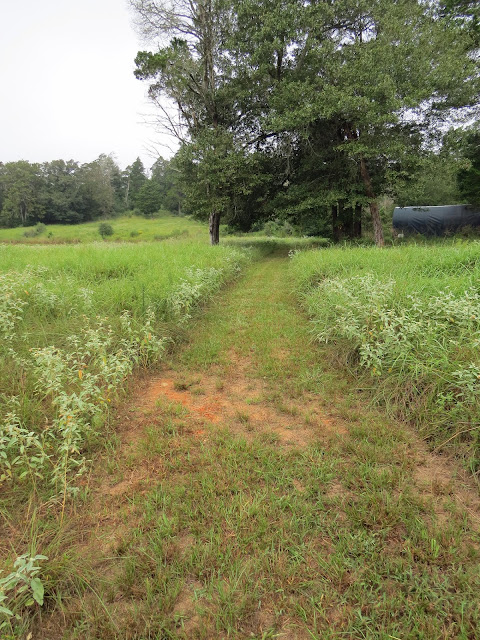 Once a month, when I'm checking all the tire pressures and oil levels on everything, when I'm exercising all the various engines we have, I use it to cut paths between our buildings and up to the gate.

It's hard to tell here, but the vegetation on either side is waist high, and at certain times of the year, twice in our climate, the burrs will coat your legs like 70's era fuzzy-yarn legwarmers, so having some cleared paths to move around on comes in handy.

The battery has long since died so the process is to start the tractor, back it halfway out of the barn, use jumper cables to get the mower running, back the tractor up out of the way and then set out on the mower, either hunched over so the curve in my spine acts as a spring or with my feet braced hard and my back arched against the back of the seat so my butt isn't transferring the shock of every little bump and dip straight into my spine.

But the other day, when I engaged the mower-deck clutch there was a terrible grinding noise and I left a swath of uncut field behind. It looked like a mohawk, trimmed on either side and still long and raggedy up the middle.

Of the three blades under the deck the middle one was spinning freely on it's shaft, which pretty much meant that it wasn't spinning at all, which sort of defeats the purpose. 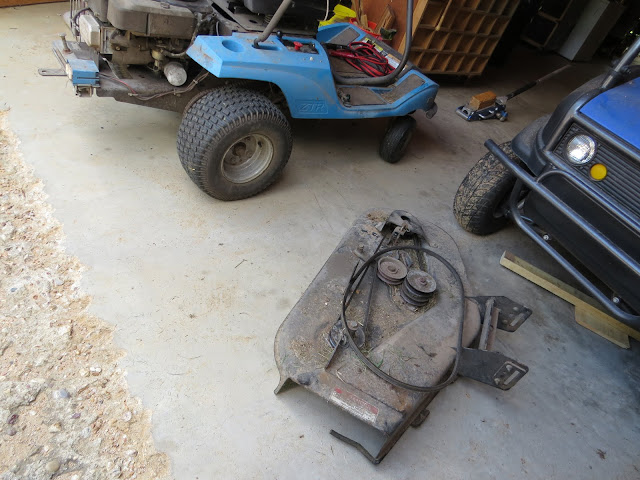 So I rolled the Dixon into the main barn and dropped the deck out from underneath.

That sounds so blasé when I write it, but when squinching around on my back on the concrete of a near 100 degree barn floor trying to jamb my hands into places they don't fit to pull cotter-pins and remove guide-bars, it's a pain in the ass!!!

A little work with my largest adjustable and pipe wrenchs (I don't have an impact socket large enough to fit the nut.) showed that even though the nut was tight, tightening it up another quarter-turn tamed that errant center blade in a very small fraction of the time it had taken me to drop the deck.

And after all that effort it seemed a shame to remount the deck just like that, so I went ahead and pulled all the blades and worked them over on the bench grinder (with a bucket of water right there so I didn't pull the temper out of the metal.) then put them back on again.

And while I was at it I took a look at the belts, honest!!

None of them were new, but there wasn't anything seriously bad looking about any of them, no missing bits, no deep cracks, no delamination, so eventually I reversed the disassembly process and got the deck back under the mower and operational again.

All in all it only took about half the day. (If you don't count the day and a half of recovery time and the two weeks it's going to take for that split knuckle to heal. . .) 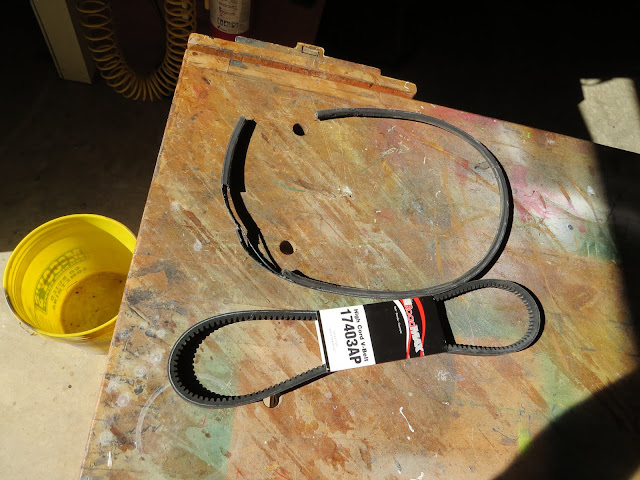 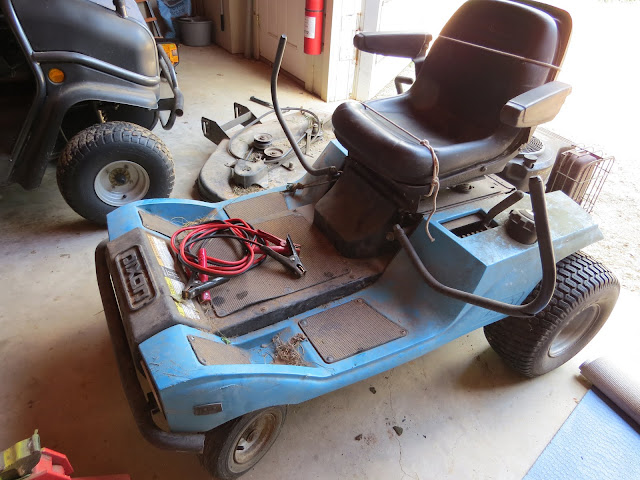 Of course it's a 41 X 1/2 belt and the closest thing I had in the shop was the 43 X 1/2 spare for the tractor, so after dragging the stranded mower back up to the barn with said tractor I had to make a 30 mile round-trip to town to get a belt.

Then not only drop the mower deck once again, but this time also remove the electric clutch, (For engaging/disengaging the mower deck drive) and 4 wire flap-guards (To keep the main drive belt from flapping around when in neutral and jumping off the pulleys.) to get the new belt on.

and rehang the deck under the mower

and finally, push it out of the barn by hand to get it within jumper-cable reach of the tractor.

Sometimes you come up craps. . .