When Harold Warp named this place Pioneer Village, he wasn't so much thinking of the Little-House-on-the-Prairie kind of pioneer, though they are certainly included in the exhibits, but rather he used pioneer in the sense of innovator.

When you walk in the door to Pioneer Village, go on past the gift shop (Time enough for that later! Or not.) until you hit a wall, turn left and on the left is a ticket window. It's manned by the gift shop clerk so you might have to wait a moment while she rings up a customer.

With ticket in hand turn 180 degrees and walk through the turnstile into what's called the main building.


The place is packed to the gills and can be a bit overwhelming, but, just like the RV Hall of Fame, arrows have been painted on the floor to help guide you along. But did I mention this place can be a little overwhelming??? 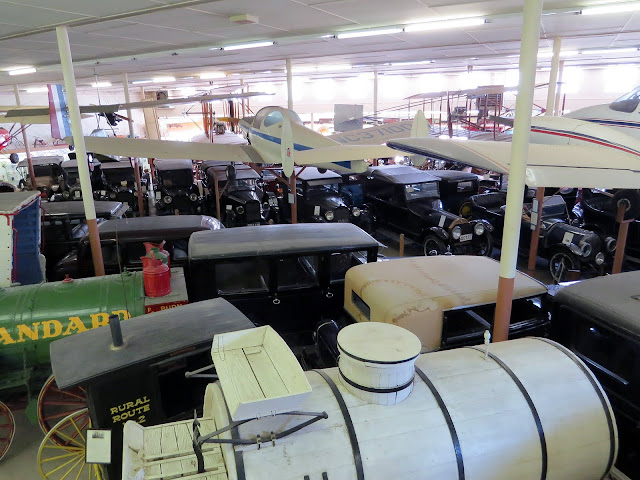 Oh yeah, so I did, but - well - this place can be a little overwhelming!

So much so I hadn't made it down the first jam-packed aisle before realizing that I had buried myself behind the camera and was clicking and moving without taking the time to see and absorb. After a short pause, during which I gave myself a stern talking too, I went back to the beginning and tried again, this time experiencing and not just recording. 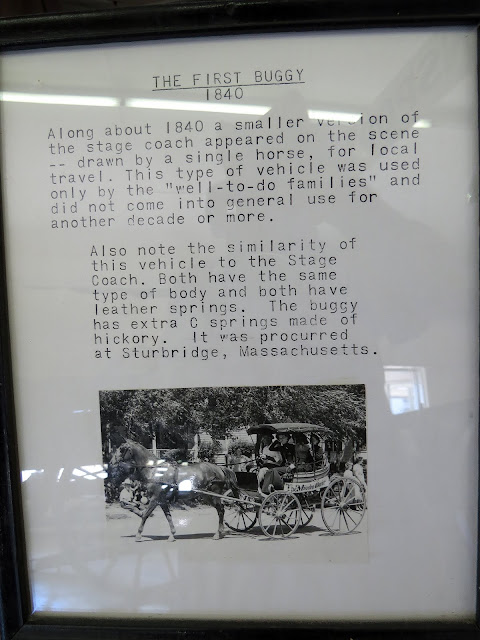 Most of the major exhibits have little placards that go well beyond just labeling what you're looking at but also giving some background info and context. 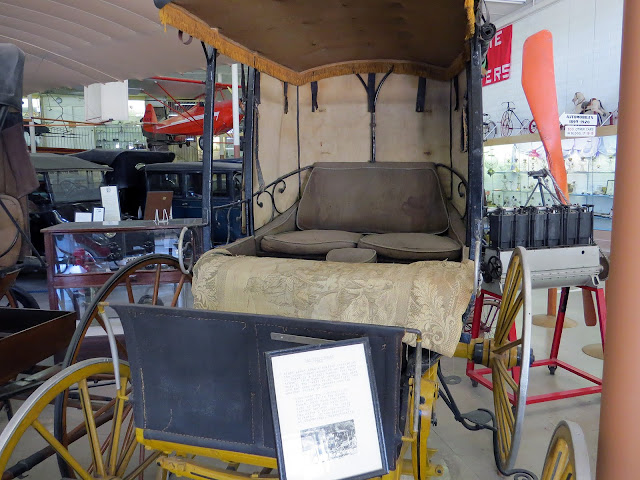 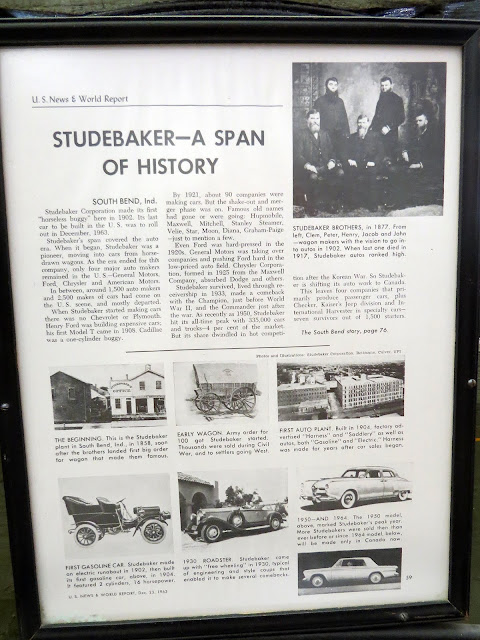 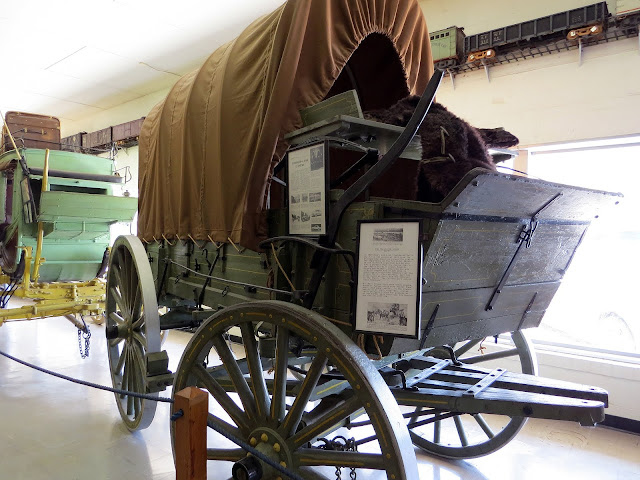 Like the Willis MB (Jeep) of WWII, this Studebaker wagon was built by the thousands for the Army during the Civil War, and later became a civilian favorite for those heading west. 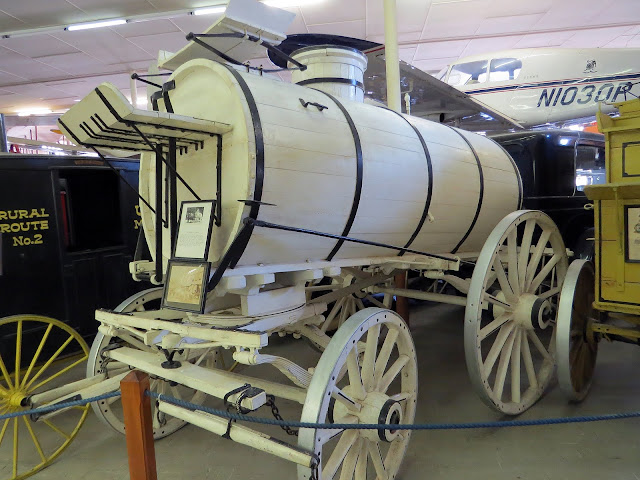 The place is full of work-a-day tools too, such as a traveling merchant's wagon, horse-drawn school bus, and this street sprinkler, of which most every town of any size had one in an attempt to knock down the dust of the unpaved main street. The nozzles across the back could be individually controlled so as to not wet down the well-dressed patron that might be encountered while walking on down to the haberdashery. 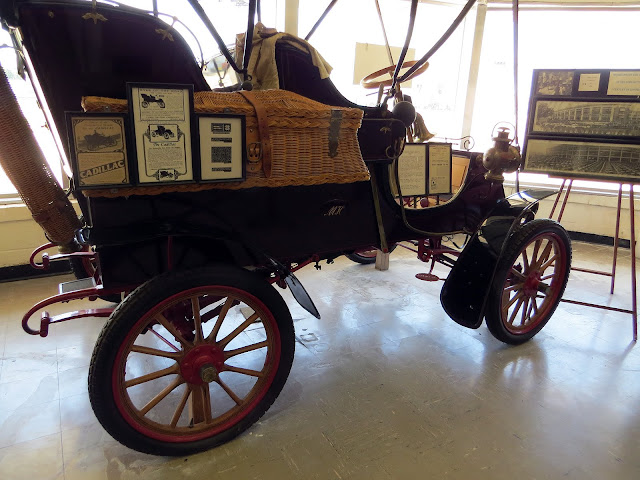 It goes on to announce that "Mr. Atwood, an auto novice, drove a Cadillac containing three passengers from New York to Waterbury Connecticut, 93 miles, at an average speed of 13 miles an hour without a stop."

They proudly point out that "This is typical performance, no accidents, no repairs, but perfect satisfaction." 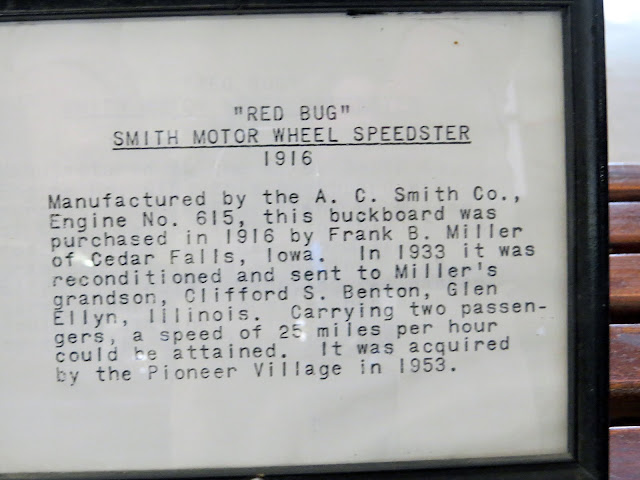 And if plain old wheeled transportation isn't your thing, how 'bout something a little weirder?? 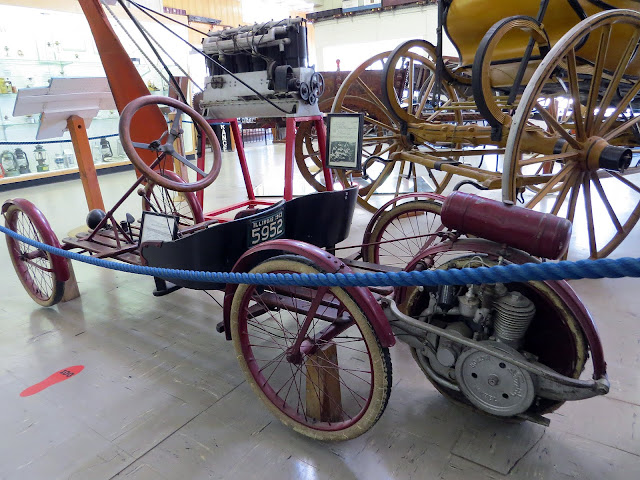 There were no posted instructions, but as far as I could figure, you put fuel in the tank there over that extra wheel in the back, started the engine which spins the wheel, then used a big lever up by the steering wheel to lower it to the ground and launch yourself. With a top speed of a blistering 25MPH (My tractor will only hit 15MPH and it scares the crap out of me at that speed!!) I'm not sure Clifford's parents were all that happy when grandpa gave him this contraption!! 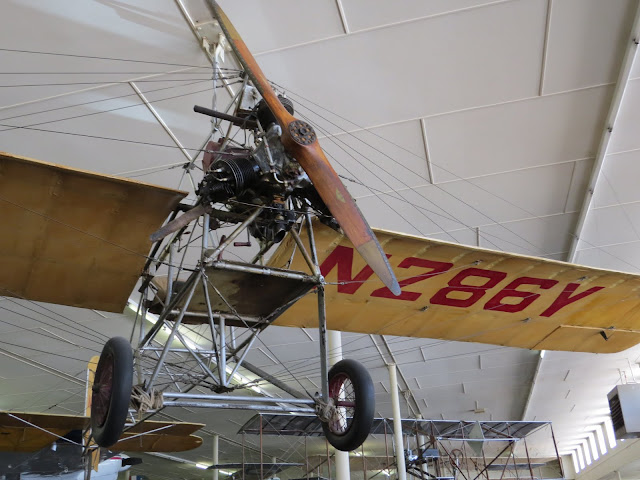 Want something a little more than just ground-based transportation?? 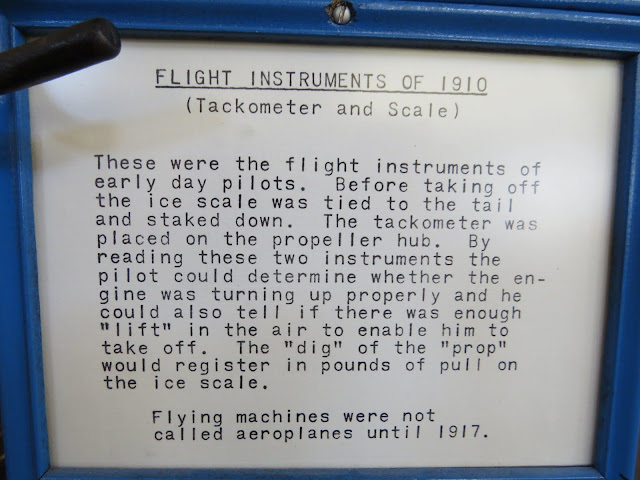 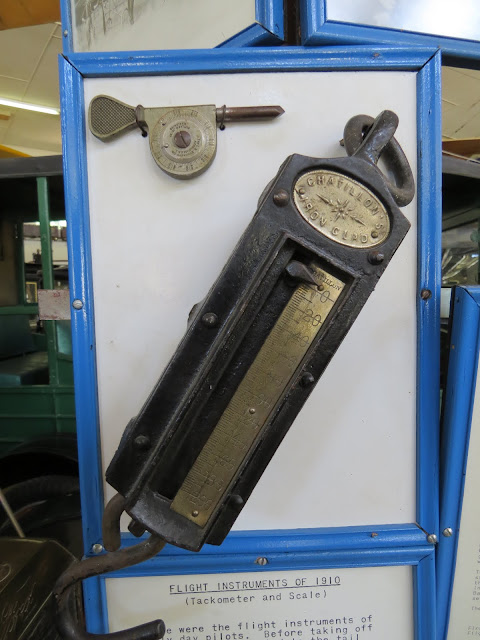 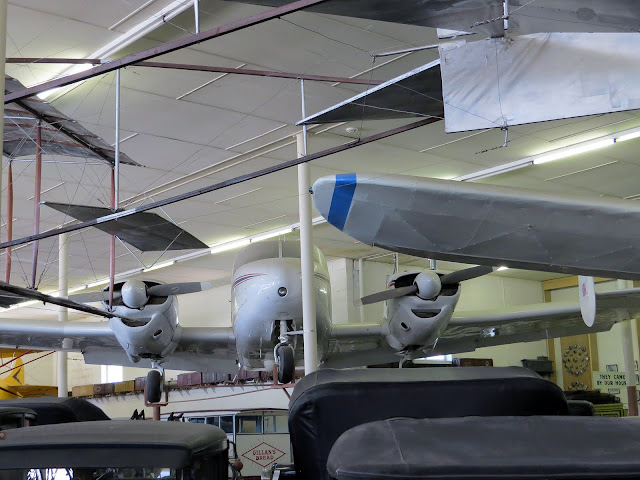 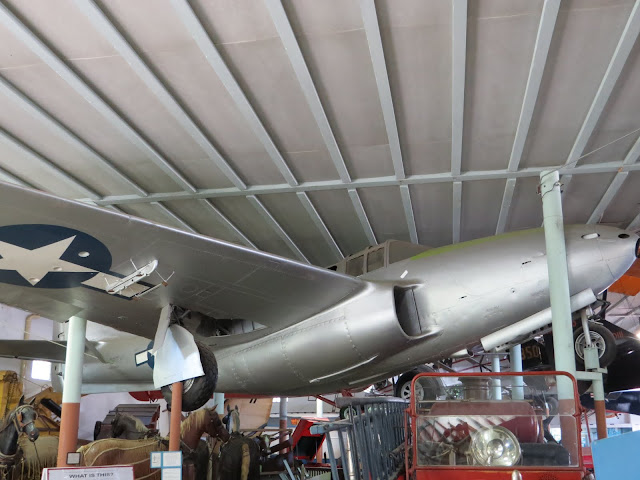 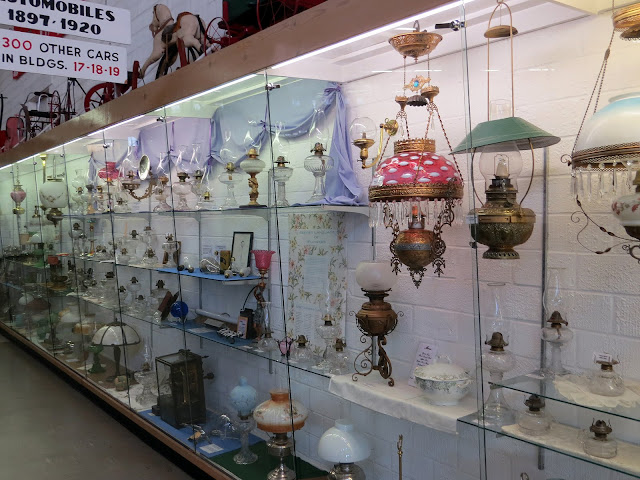 No??  How 'bout a history of lighting? 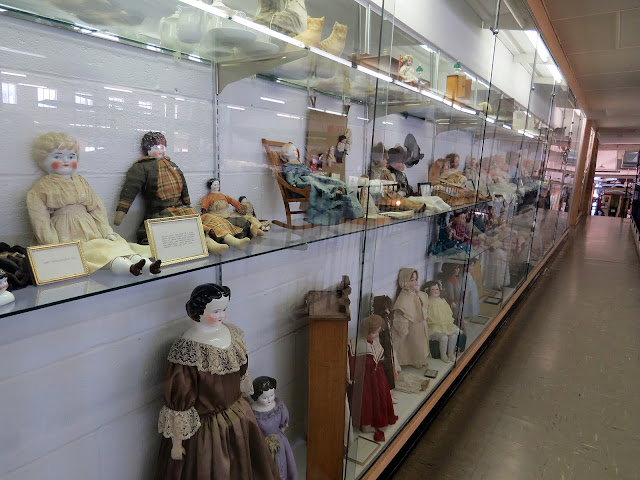 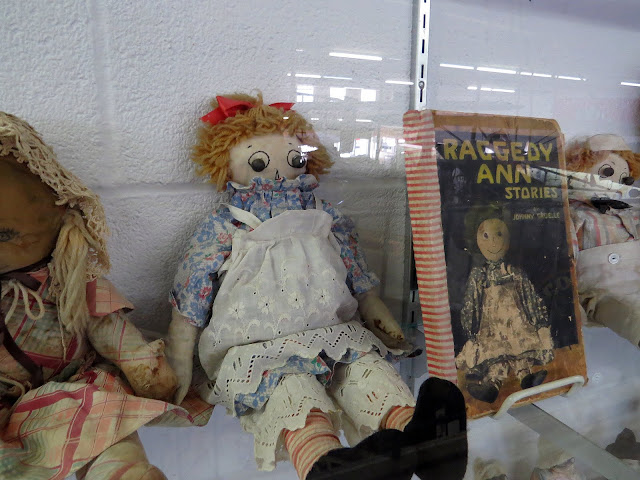 Remember when I was visiting the Hippie Memorial in Arcola, which is also happens to be the birthplace of Johney Gruelle, the creator of Raggedy Ann and Andy?? 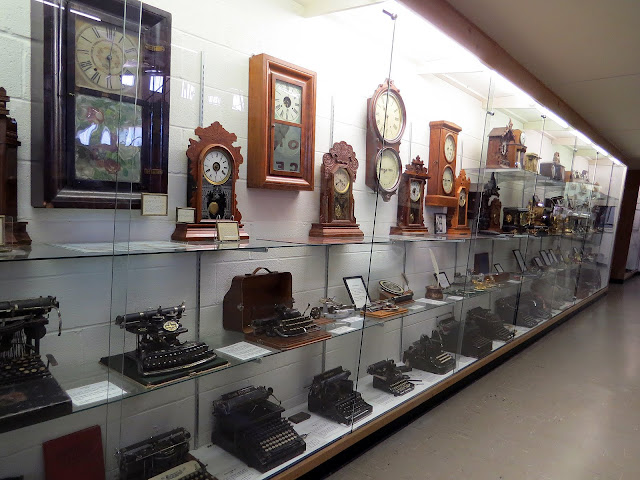 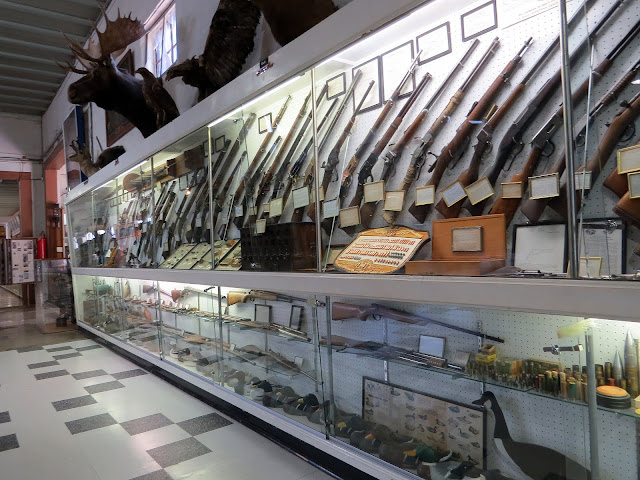 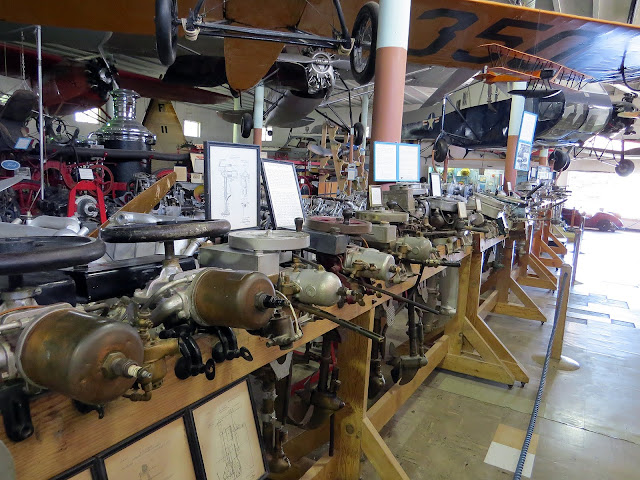 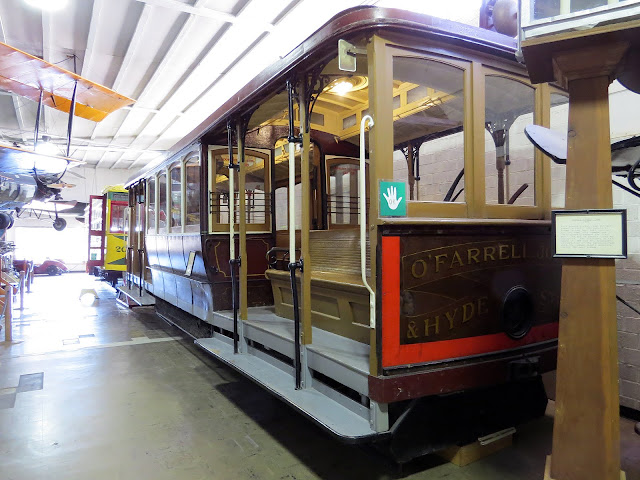 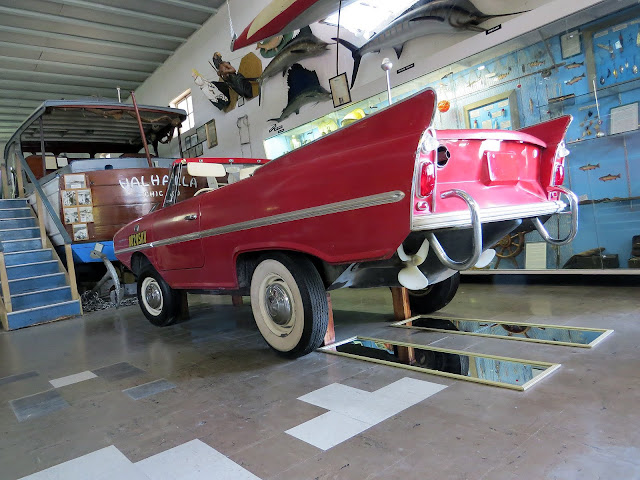 And I haven't even made it out of the main building yet!  There's something like 23 more buildings to go!!!!