The theory behind hump yards is fairly simple.


Take a string of railroad cars and push it up a hill, letting the cars roll down the other side


Except it's not quite that simple.

Take another look at the photo above. See how the sorted cars are all bunched up to the right end of the bowl? If they stop rolling too soon then there won't be enough room left on the sorting, or classification track to fit them all in, but you certainly don't want cars crashing into each other so hard something breaks, like maybe the freight, nor do you want cars stopping short of each other and not coupling together properly. 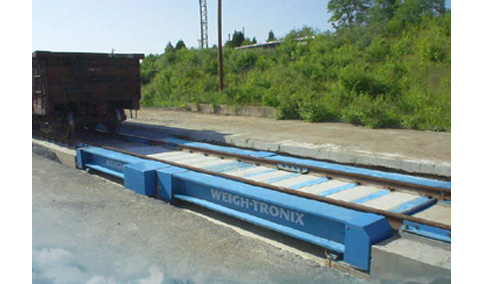 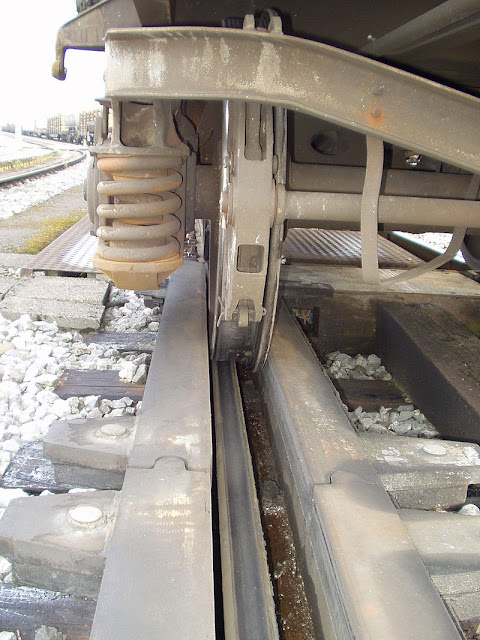 Then, based on the weight of the car, it's number of axles and speed (More sensors) and how far down the track it needs to go, retarders will grip the wheels just enough to make sure the car is slowed down to the right speed for momentum to finish the job.

Of course none of this is worth a hill of beans (Or should I say hill of rail-cars) if the cars don't all end up on the proper tracks down in the bowl, so on the way up the hill each car is scanned to find out where it's supposed to go, then computer controlled switches are lined up to move that car onto the proper track.

All of which might sound like a whole lot of things that can go wrong, but it sure beats the alternative of having an engineer, conductor and brakeman on the ground hand-switching each car one at a time while working off of a paper printout.

For some reason both east and west humps have the cars being pushed up and over the hill from left to right, (west to east) which means the sorted westbound cars have to be pulled out of the east (right) end of the bowl then reversed to push them onto the west departure tracks along the very top of the photo above. Now the cars themselves don't mind, but that does mean the road engines can't just reach into the bowl and take off with their train. (The eastbound cars are already headed in the right direction when pulled from the bowl.) Not the way I would have designed it but I'm just an observer and somebody down there must know what they're doing. 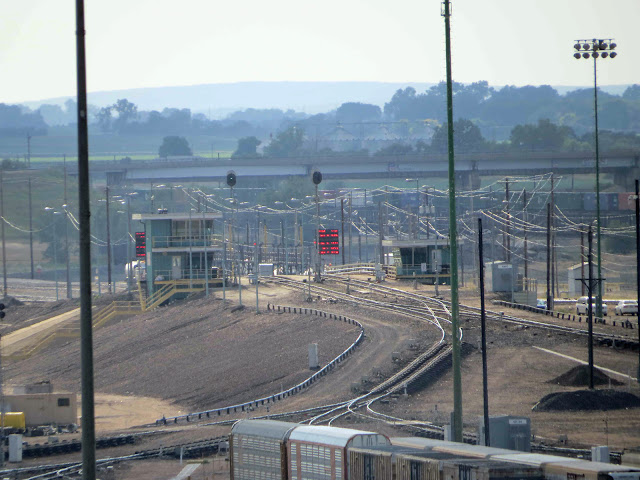 Though Bailey Yard is a 24 hour operation, when I first got up there in the Tower the eastbound hump was sitting idle, but there was activity over there on the more distant westbound hump. 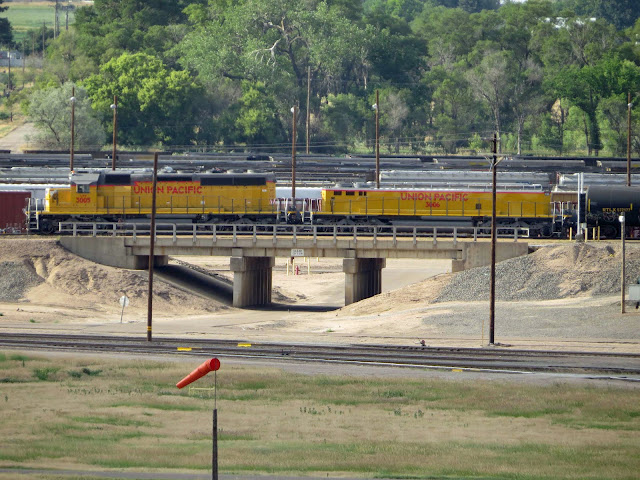 UP engine 3005 and slug 3006 were shoving a cut of tank cars up and over the westbound hump.

A slug has no power plant of it's own, just traction motors that take their power from the engine. This setup isn't much good for moving long heavy trains down the road fast, not enough horse-power, but it is a good way of getting plenty of traction at slow speeds.

The cars you can just see the roofs of beyond the engine are sitting in the westbound departure yard waiting to be sent on their way. 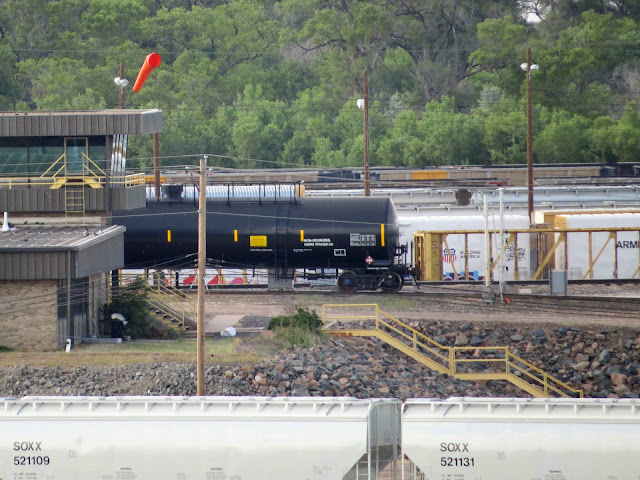 This tank car has just gone over the hump after being scanned and weighed. 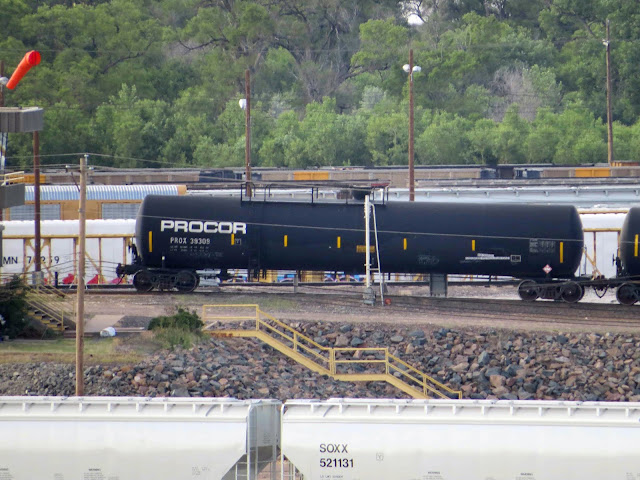 It was the first of three tank cars all going the same place and here is the last car of the string heading down the hill. 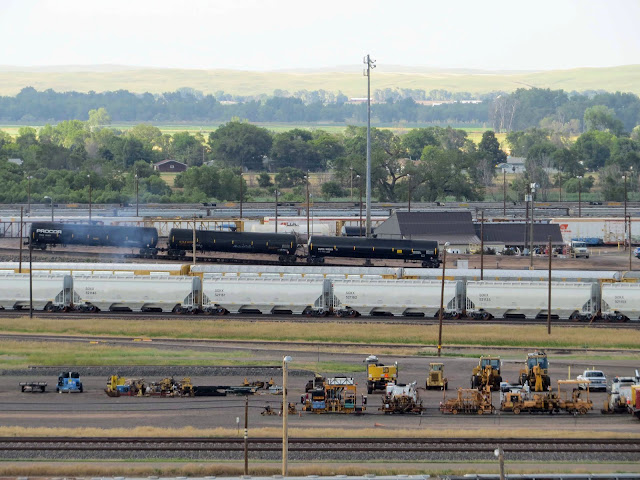 Here they are nearing the bottom of the hill. From here the cars will be guided onto the proper track where they will be combined with other cars all heading to the same general destination, then sent on their way.

The cars between me and the humped tank cars are sitting in the westbound receiving yard. Some of them may go over the hump but the autoracks, with their yellow sides and white roofs, will probably just be pulled on through (towards the left) and added to a departing westbound train since you're not supposed to hump loaded autoracks (Kind of messes up the new paint!) and I would think most westbound racks would be loaded. 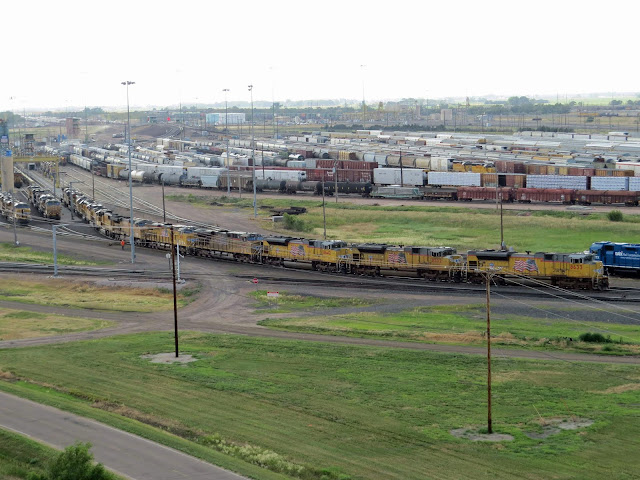 Here's where those extra couple of stories originally planned for the Golden Spike Tower would have come in handy. The yard is so big that even standing 8 stories above it isn't high enough to see everything well.


The eastbound bowl (top third of the photo.) is closer to the tower than the westbound bowl, even so it's still kind of hard to see into the bowl. But still, this photo gives a hint of the shear number of rail cars Bailey Yard handles at any one time.

As I showed in the previous post, the string of engines in the middle of the photo are getting sorted out before being assigned to various trains. 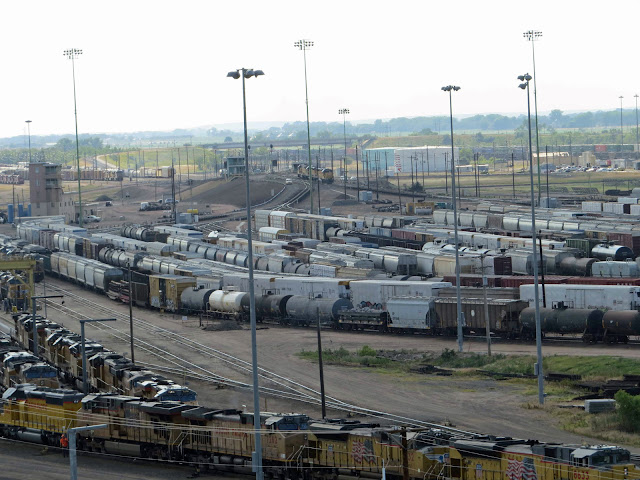 While I was trying to watch everything that was happening all over the yard, three engines snuck over the eastbound hump. They are there in the top center of the photo, next to the SUV coming down the hill after dropping off a crew at the hump tower. 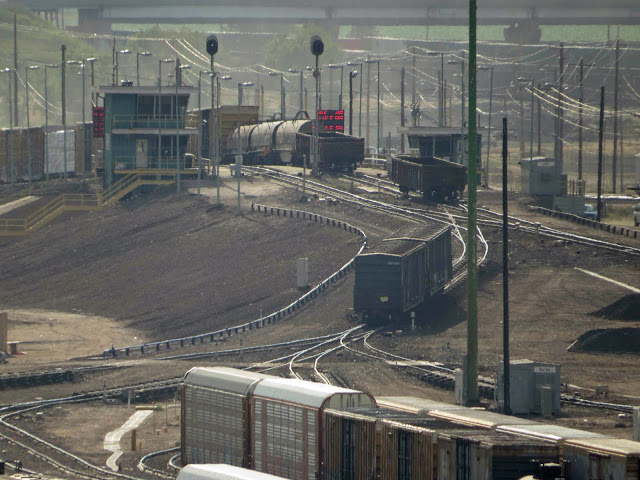 And it wasn't long before they were shoving a string of cars over the hump and rolling them in ones, twos, and three's down through the retarders and switches.

Next time I'll wrap up my visit to the Golden Spike Tower.