OK OK, I know that to some KOA's are the amusing little stepchild of campgrounds, that old standby when you need to come up with a laugh; the fart joke of campgrounds; and I used to count myself among those.

I think a lot of that was a learned behavior. It just so happened that KOA got it's start when I was a kid, so KOA's had a lot of visibility in the early days of private campgrounds, at a time when our family's camping was frequent and heavily 'wilderness experience' focused. Also, with 3 small kids and all that goes along with that, our parents probably found the forest campgrounds more affordable in those days, so I was rarely exposed to private camping, and especially not KOA's! (Dad! Dad!- - No. - - But they have a playgrounnnnndddd! - - We can't afford that kind of foolishness, now sit back and get your feet off your sister's side of the car!)

Even as I got older, for no particular reason other than prior association, my nose used to crinkle up in the precursor to a sneer at the thought of stopping at the distinct winged A-frame, but I was young and dumb then. I'm still a bit on the dumb side now and then; but I am older now!

Granted, as far as the camping experience goes, generally KOA's are not in the same class as most public campgrounds, usually far closer to major roads and noise than scenery and hiking, (But not always!) but admit it, for a simple, hassle-free overnight stay, especially when you could also use a laundry facility, a decent shower, shore-power for the AC, or need a convenient base-camp while exploring a more urban area, they really come in handy.

For years, many years, as in my membership goes back to the late 80's, I was a die-hard, loyal Good Sam-er, but then I noticed that I was finding fewer and fewer Good-Sam affiliate campgrounds when I wanted a simple, quick and easy one-nighter. (For longer stays public campgrounds are my first choice.) I was finding KOA's instead.

After too many undiscounted nights in KOA's all over the country I finally broke down and paid for a Value Kard, then immediately followed that up by loading the KOA app onto my phone. (All the while feeling very disloyal to the Good-Sam card in my pocket, hoping that the little guy didn't figure out what I was doing and lose his goofy smile.)

Boy, I wish I'd done that long ago! 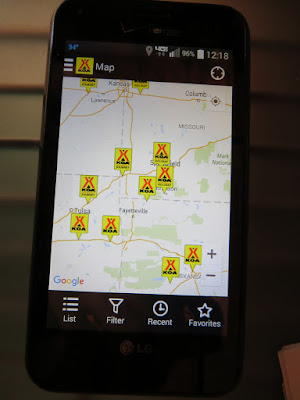 Now, when I do want some amenities, and I'm starting to think ahead, usually sometime around mid-day, all I have to do is punch up the app, take a look around at the KOA's in the area, 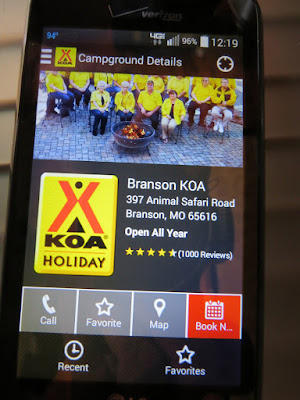 check out any that look interesting, as in about the right place along my projected route, and with a simple tap on the Book Now button I can reserve and pay for a site using my info already loaded into the app.

If I'm going to be a late arrival that's just another few taps, then when I do get there the paperwork and my site assignment will be waiting for me in the box outside the door.

And remember, I've already paid so an early departure, before the office opens, is no problem.

It takes just a few minutes and and a handful of taps, then I don't have to spend the rest of the day wondering where, and if, I'm going to find a spot for the night.

(Making reservations and worrying about finding spots never used to be part of my road-trips, but that was before the population of camping road-trippers got so out of hand!)

I've found KOA prices to usually be competitive with comparable private campgrounds, sometimes even with nearby public campgrounds, plus, as a card holder I get a 10% discount and each stay earns me rewards points for even more discounts, and since they're all part of the same network I pretty much know what I'm going to find without having to squint at the fine print to interpret the three-tiered, ten-point rating system some campground guides use.

True, each KOA is privately owned, but once a year corporate inspects each one with something like a 600 point checklist so I can safely expect a certain level of consistency across the network.

At the end of a long day of touring this consistency of standard is better than getting caught out by something like the non-KOA Biggs RV Park at Budget Host Motel near Trinidad CO where, for the cost of a resort stay, the 'campground' was a few power posts in a steep, dusty, isolated field behind the motel and if you wanted the bathroom or shower, boldly listed as part of the amenities, the front desk would give you temporary custody of a key to a currently empty room. (I gave it a shot, but after about an hour of listneing to trucks braking for the DOT station and staring at a broken down old trailer blocking my view of the scraggly hill while contemplating walking up to the pimply faced kid at the reception desk to get a permission slip to use the bathroom, I went and got my money back, minus $5 to cover the electricity I might have used up in that hour, and drove over the hill to the Raton KOA which is where I finally paid for my first year's worth of Value Kard.)

So, though I don't wear my kard like a badge on my lapel, I am a kard carrying KOA'er.

Actually you don't need to carry a kard at all anymore, you just punch up the app on your phone and show them your member number, or the people in the familiar yellow T-shirt can just pull it up on their computer using your name. 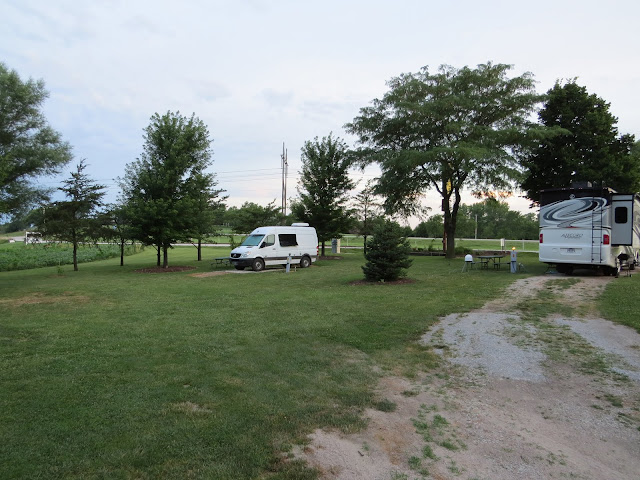 Yep, KOA.  The yellow sign is hiding there behind the tree to the left of the large rig. This shows one of the advantages of driving a compact rig. I can tuck into sites others can't, like this one which is nothing more than a small gravel pad sitting all alone out in the grass.

It's not that my travel budget allows for a private campground every night, but I can squeeze one in here and there without the sheriff dragging me off to the workhouse. So now I use  the heck out of KOA's and see no reason to stop.

(By the way, I am not affiliated with or compensated by KOA in any way other than as a regular customer.)