Unless you're a Nebraskan, or a railroad junky, you may never have heard of North Platte. (And I have no idea what ever happened to South Platte, or even just plain Platte, so don't ask. . .)

First off, this town of 25,000 is in Nebraska and more people live within the city limits of Houston than live in all of Nebraska. On top of that North Platte isn't a state capital or presidential birthplace you would have memorized as a kid, (Do they still do that??) but what North Platte does have is the world's largest rail yard. 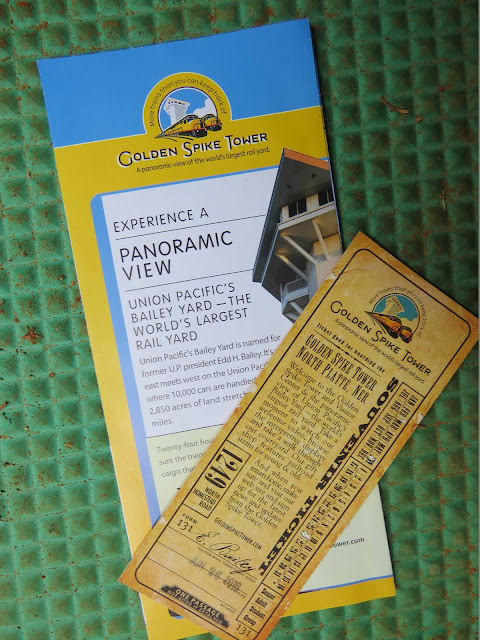 This Union Pacific's Bailey Yard covers over 2800 acres, is 8 miles long and over 200 tracks wide, and overlooking the whole thing is the Golden Spike Tower. 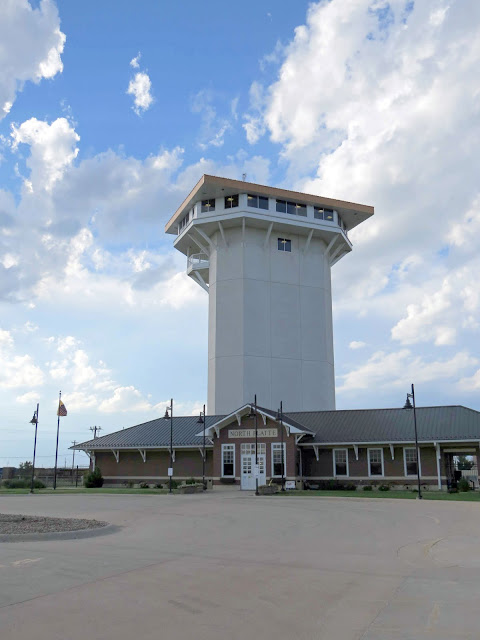 The tower had some rocky beginnings but opened in 2008, nine years after, and several stories shorter than, its conception. (Any taller and new building codes would have required a second stairwell which there just isn't room for.) 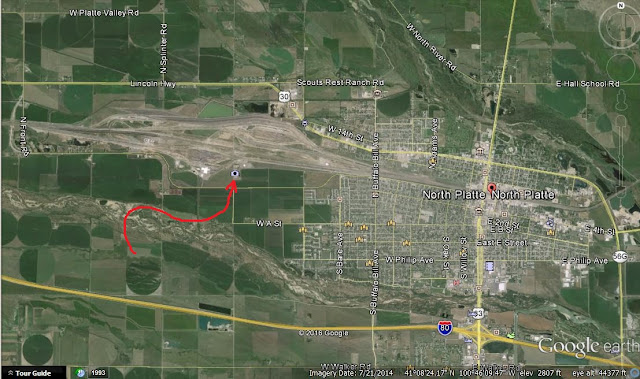 Actually getting to the tower, there at the end of the red arrow, seemed a little awkward, but then again I was running short on time and just wanted to be there.

The whole western side of North Platte is split in two by the eastern end of the rail yard and there are no 'main' roads on the south side of the yard, where the tower sits. The most common directions have you turning onto West A St. off of Buffalo Bill Avenue. West A St. starts out as a 30 MPH residential street and eventually turns into a 30 MPH country road slowly slogging through planted fields.

You can see the tower from the turn but it will seem like forever before you can make the right turn onto East Tower road (Not named for the Golden Spike Tower which is relatively new, but rather for the East Route Tower controlling eastbound departures from the rail yard.) but people don't seem to have any problems dropping in spur-of-the-moment. While I was there two different carloads of people just passing through on Interstate 80 saw the tower and stopped in to take a look. 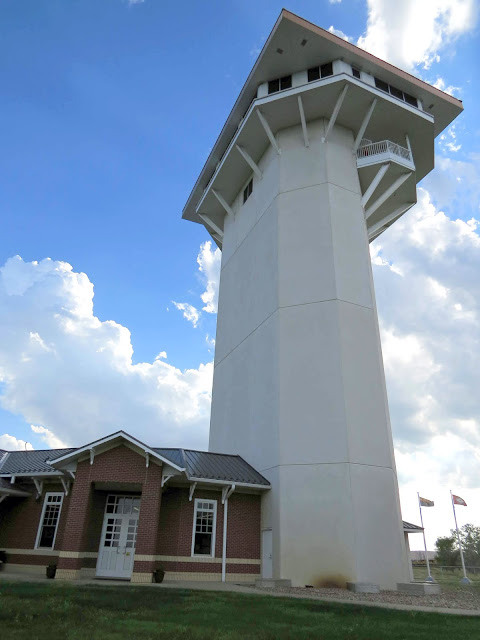 On the ground floor of the tower is a bit of a museum/gift-shop and a small theater with a 5 or 10 minute video about the rail yard. 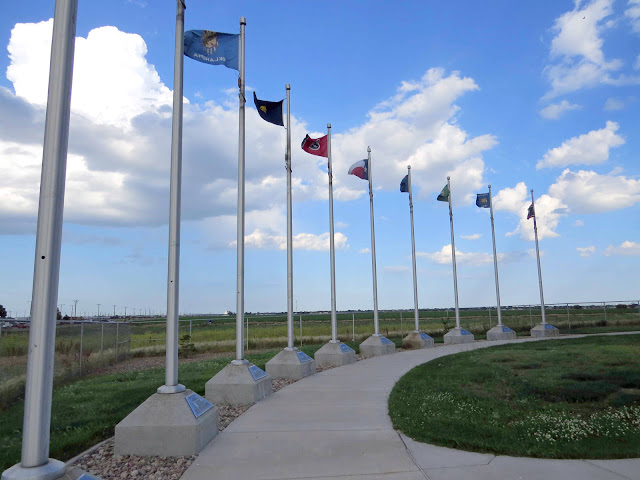 Out the back door is an arc of flags representing the states Union Pacific services, 23 in all. 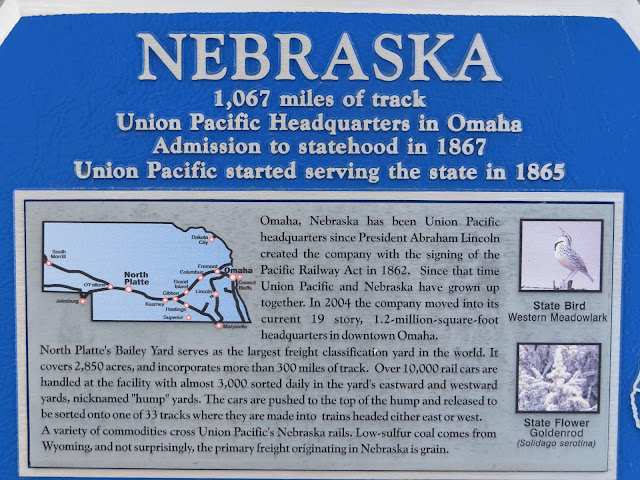 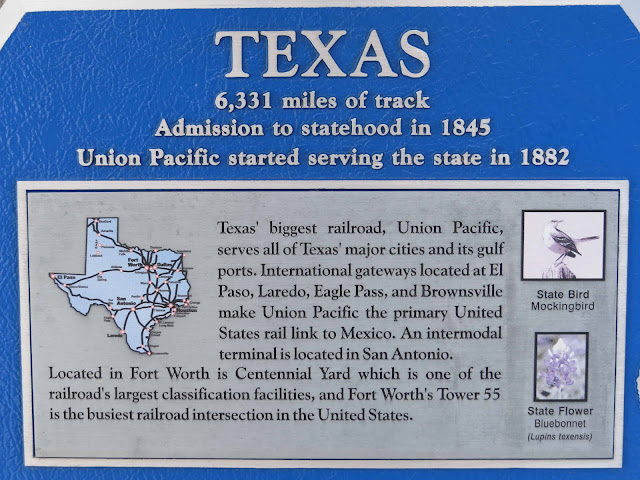 But Texas has the highest number of track miles 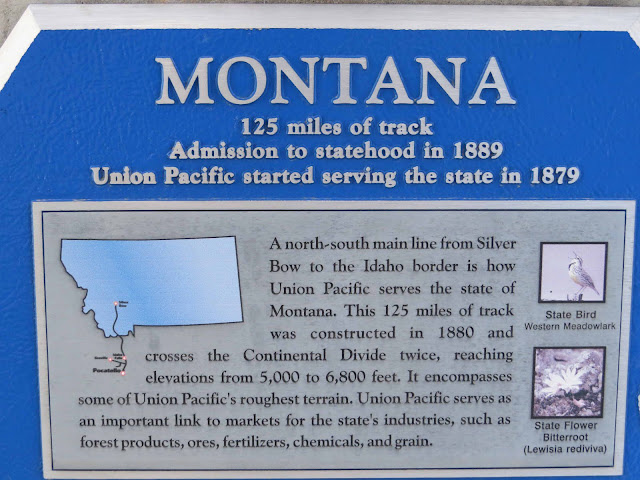 And Montana the least

But I don't have time to hang around down here on the ground. The front doors to the tower close in an hour and I expect there's more than an hour's worth of looking to do from the two observation decks above me. 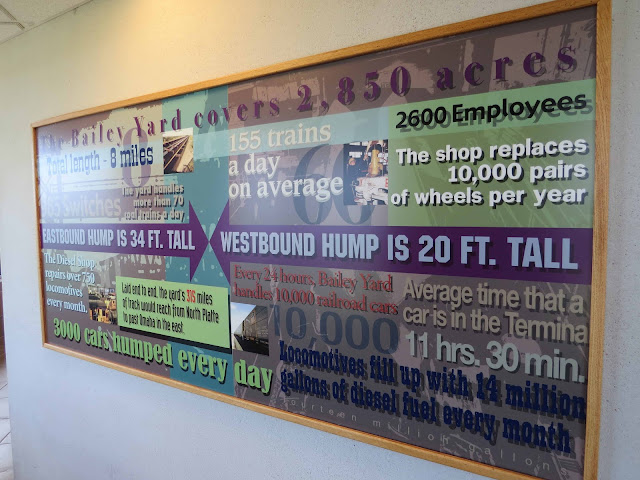 and some information plaques. 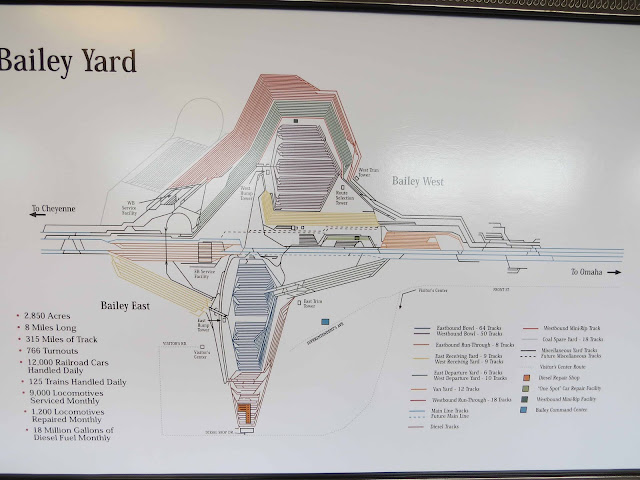 Including this stylized map of the yard which I personally found difficult to interpret because it's not to scale. The width of the yard is greatly exaggerated and I found it challenging when trying to associate what I was seeing on the ground with the map.

Fortunately there was a tower volunteer up there as well.

Usually I find retiree-volunteers that ask too many personal questions and can't seem to stop talking, annoying, (I have visions of them storing up words while living in a lonely room with nothing but a TV for companionship.) but in this case his knowledge of the yard was quite helpful. 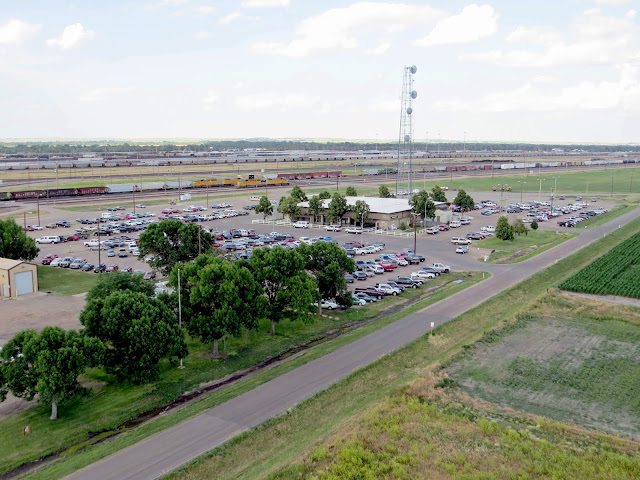 Just northeast of the tower is the yard's command central, a busy place that operates around the clock, and over the next few posts I'll show some of those operations.

But since this will be all in still photos you will have to use your imagination to supply the zing of steel wheels against rail, the grumble of engines, the smell of diesel, the crash of couplers and the crisp bleat or lonely wail of air horns.