When it comes to rail yards, 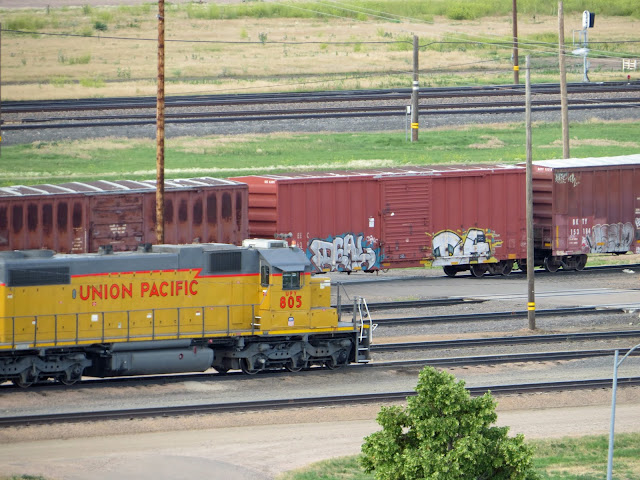 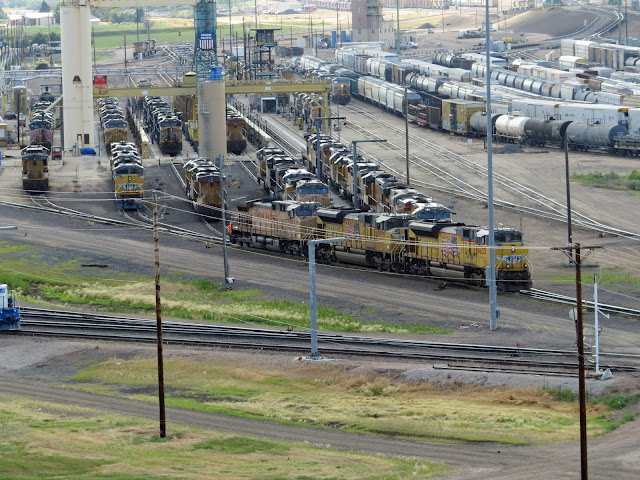 the facilities that service them, 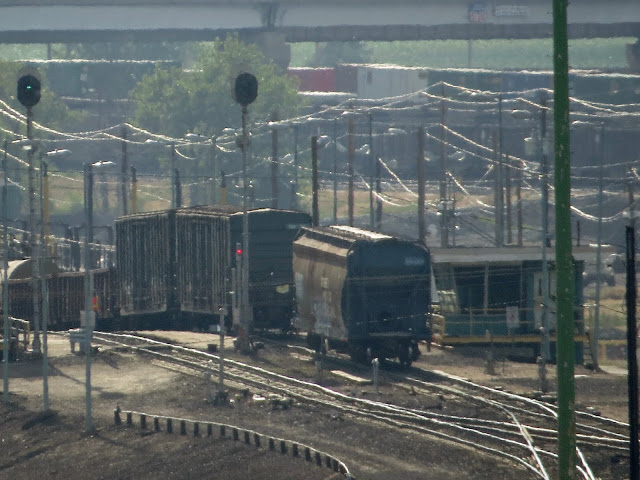 
are the sexy side of the experience, 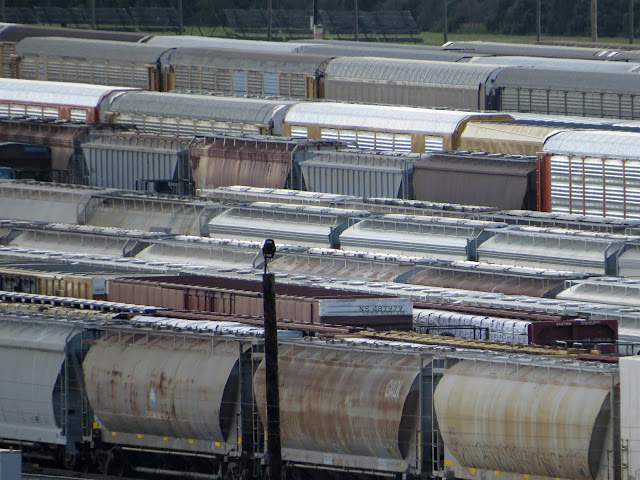 freight is what pays the bills. 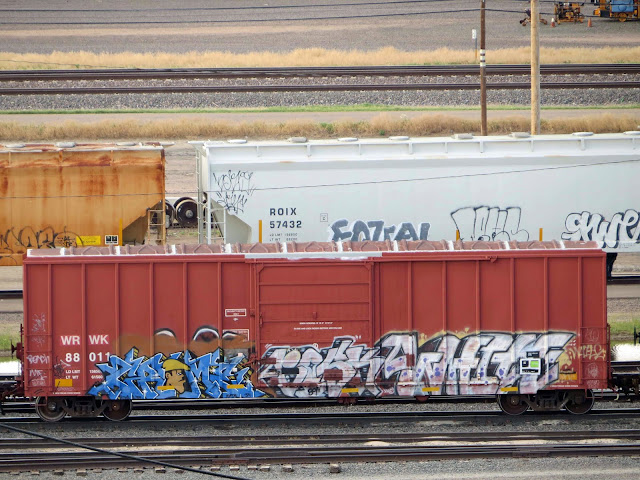 So it's the lowly 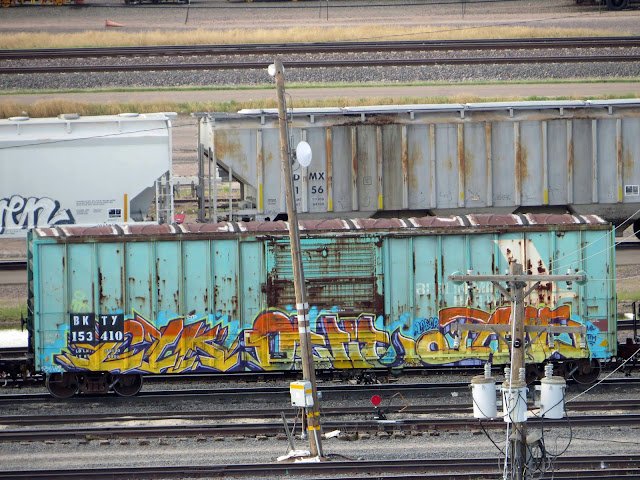 and often abused freight cars that are the real workhorses of the railroad.

So mixed in with all the sexy stuff at Bailey Yard, are the receiving and departure yards where the real money is.

(Because the yard is so large, my perch up there in the Golden Spike Tower wasn't high enough to get a clear view of everything, so I have reverted to Google Earth images to give a better sense of the place.)

In addition, you may have noticed a large area along the entire north edge of Bailey Yard that I haven't touched on yet.

This is called the storage yard and I count 42 tracks up there, none of them short! 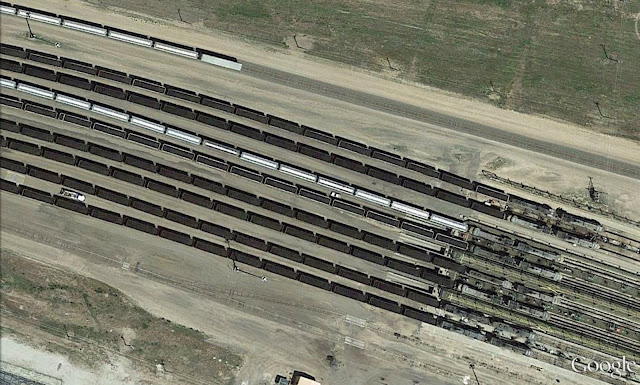 You might remember from the post on engine facilities, that there is a fueling station for eastbound through-trains that won't be changing engines and don't need any sorting. These are called unit-trains, where every car is loaded with the same thing and headed to the same destination.

A closer look at the photo above shows that many of these unit-trains are loaded with coal, mostly from Wyoming mines, headed for eastern power plants.

Now, of course, before each of these cars was loaded with bulk freight, it was empty, and since moving this bulk freight generates a large chunk of the the railroad's revenue, 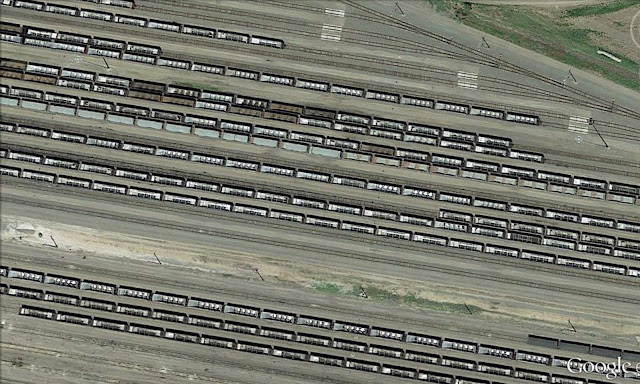 it would be a bad deal to run out of empties. In fact you might say it could be a career changer to run out of empties! To make sure that doesn't happen the railroad keeps enough cars on hand to meet peak demands, and when they aren't all needed there has to be a place to put them, hence the storage yard.

The image of the Bailey Yard Storage yard above was taken in mid-July and clearly the the demand for coal to fuel the power plants is down, so the extra hopper cars used to carry that coal are in temporary storage.

But it is getting towards harvest season so the covered gondolas used for hauling grain have been largely distributed out to locations closer to various grain elevators.

But not to worry they'll be back here in the storage yard soon enough, waiting for next season's call-out.

My time at the Golden Spike Tower was limited by their closing hour of 7PM. And they do close the front doors at 7 but, quite generously I thought, they don't come up to the observation decks and start rushing you out right away. So it was well into evening before I left the tower and started thinking about a place to park for the night.

As you might expect of a major town out in the sparely populated plains, there are a couple campgrounds handy to North Platte, but that seemed a little elaborate for my needs. 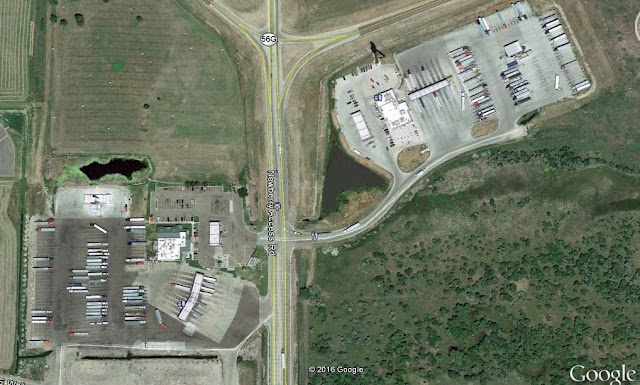 There's also a couple large truckstops, both of which not only have decent parking for The Van, but also have a few dedicated RV slots for larger rigs not wishing to park among the trucks, but they were one exit east of town 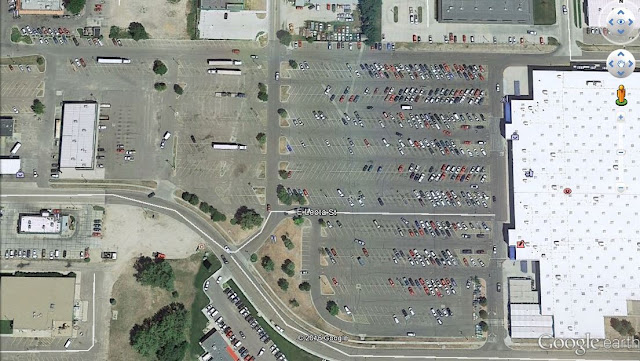 while the Walmart was right there in town. 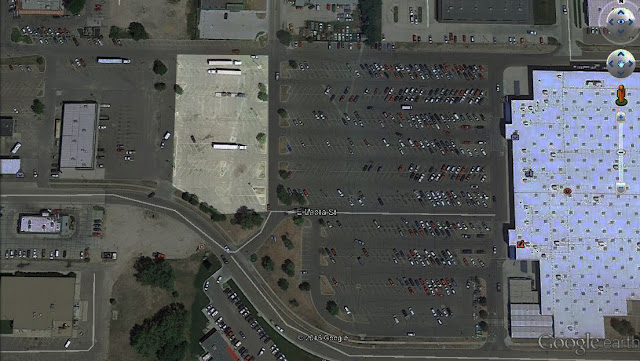 This 24 hour Walmart has a separate chunk of parking lot (left center above) over there towards the Dollar Store where they ask that you park overnight and that suited me just fine, even though they don't really care where I park The Van since it takes up no more than a normal parking slot. 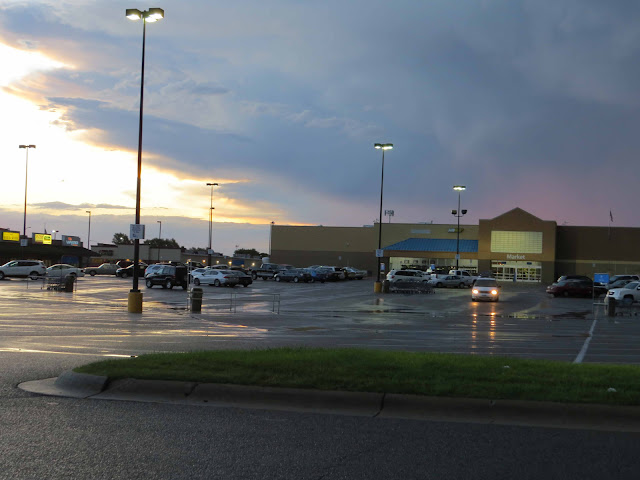 This photo was taken at 6 the next morning from just behind The Van. There had been a little rain during the night, no serous storms but some of that rain was still lurking about.