When you walk towards the back of Pioneer Village's 20 acres and leave the environs of the square, which is really round-ish, one of the buildings to be found back there is the Homes and Shops Building, or the Shop and Homes Building, depending on whether you're reading the brochure/web site, or the sign posted on the building. . . 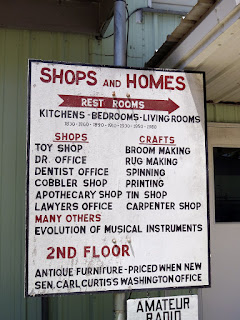 It's a two-story warehouse sized building and man is it cool inside!!

Not as in chilly, since I don't think there's air-conditioning in any of the buildings, but as in - well - cool.

(Being the middle of summer I didn't think to check on the heat situation, but given the climate and the nature of some of the exhibits they have I suspect that at least some of the buildings are heated.)

Though it doesn't describe everything in here, the basic premise of this building is picking up whole rooms from the past and dropping them in here, intact.

Some of those rooms are shops that made a variety of every-day items, In fact many of them still make everyday items because crafts-people still man them.

And I have - had - an Uncle that would have gone nuts over the extensive HAM radio display on the second floor. Unfortunately the display is at the front of the building where some windows are and in my haste, (There's just so much to see!) I didn't realize the couple of photos I took were back-lit so bad as to be unusable. (You'd think I'd know better. . .) Almost lost on a wall covered in a bewildering array of musical instruments was a wooden clarinet that may very well have been cousin to the one I played all through Junior High. (Don'cha love it when your stuff turns up in museums?? Makes it kind of hard to forget your age. . .)

There were several such 'walls' in this building. Walls showing the progression of  radios, of high-fi's and stereos, of furniture, 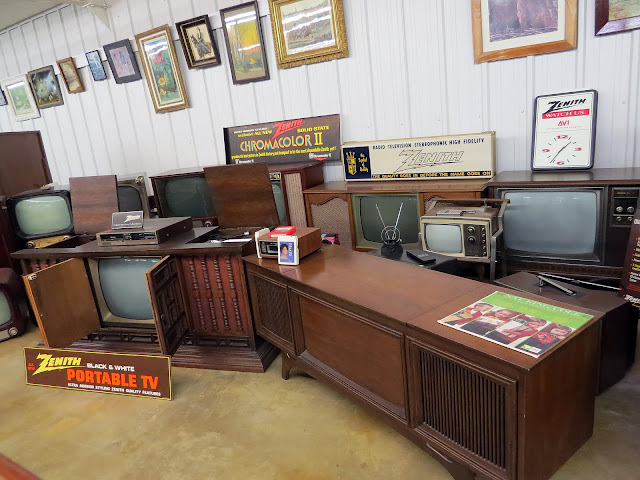 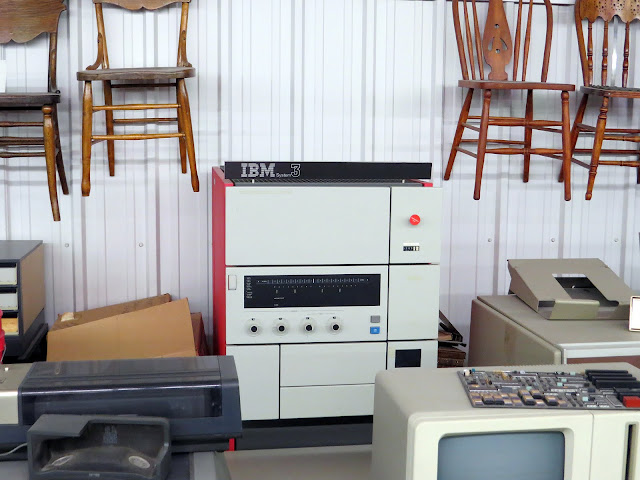 See that IBM System 3 back there? I used to be paid to fix those things. 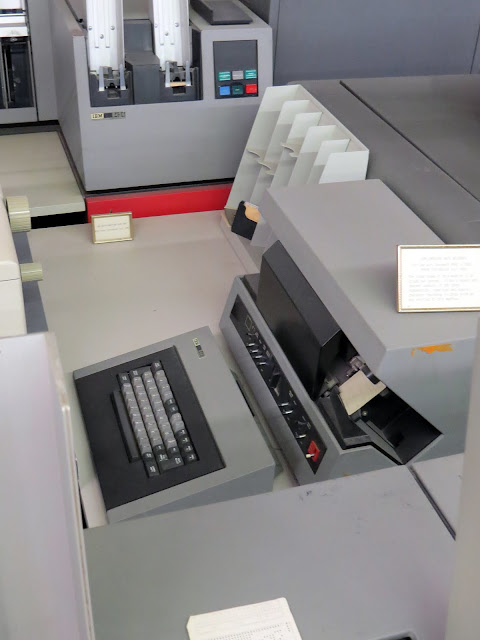 As well as the card punches data entry operators used to sit at all day, every day, (Some of them were a little nuts!) and the high speed readers (in the background) that fed those punched cards into the computer. 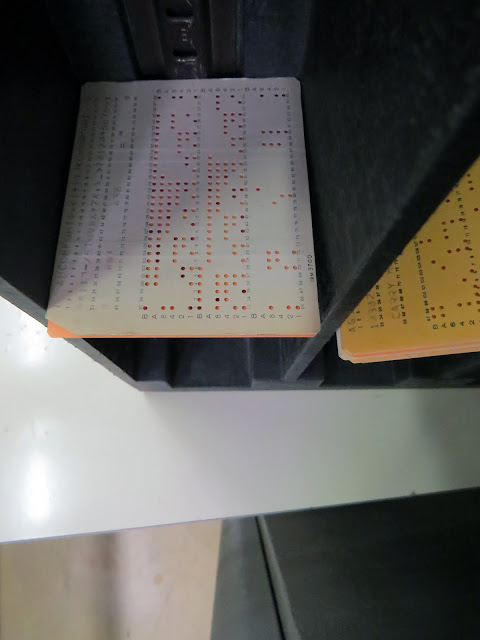 The cards, by the thousands, were used to load both programs (Apps to you millennials) and data into the computers and if you dropped a deck - well - it was going to take a looonnng time for you to sort them all back out again. And don't bend one in the process! Or you'll have to call me in to fix the machine. 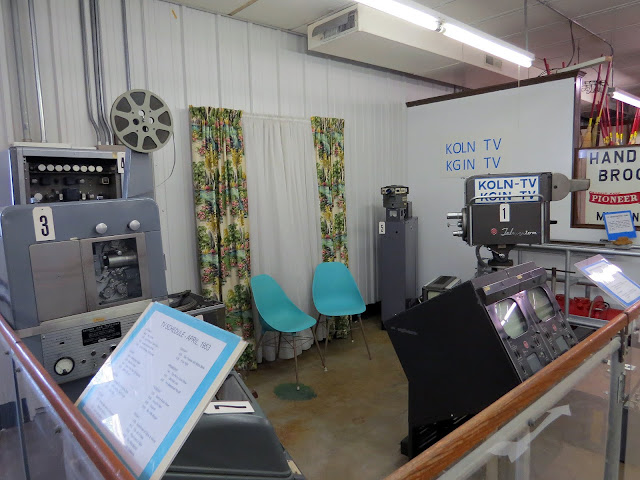 Just inside the main door is nearly an entire TV studio from the 50's with cameras and control station that Harold picked up when KOLN of Lincoln, Nebraska updated it's equipment. 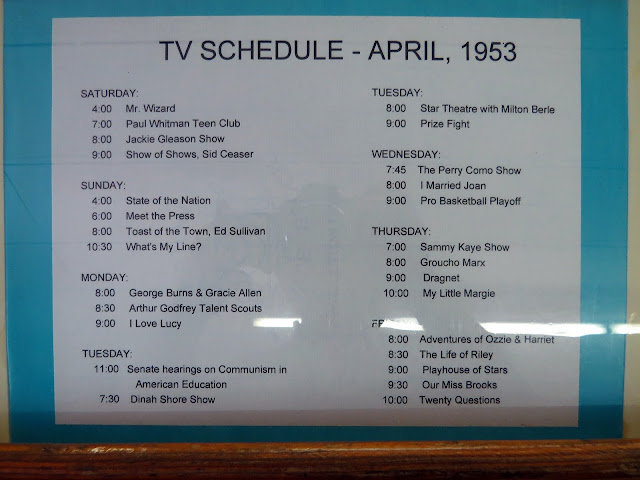 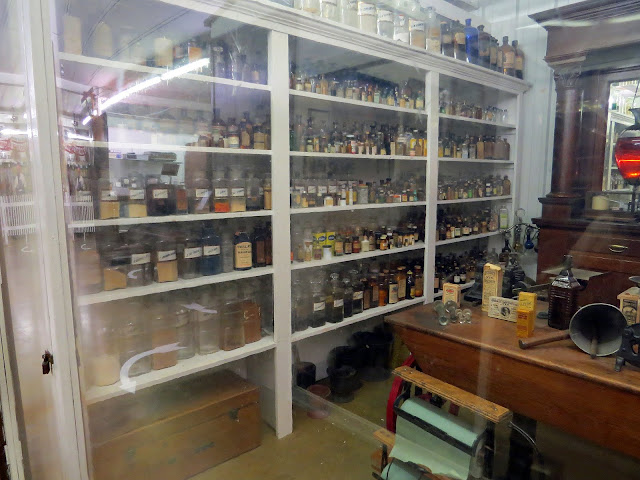 Much of the first floor is devoted to 'rooms'.

The rooms, including this apothecary, (Holy crap!! Look at all those drugs! Remember that this is from before the days of training, licensing and monitoring of pharmacists!) are enclosed behind plexiglass. Unlike the general store on the square, here the plexiglass is floor to ceiling so there's no need for alarms to chase off those forgetful photographers, but the reflections do make for difficult photography.

That arrow in the bottom left is a reflection from the floor and not  part of step-by-step instructions on how to sweep those jars off the shelf. . . 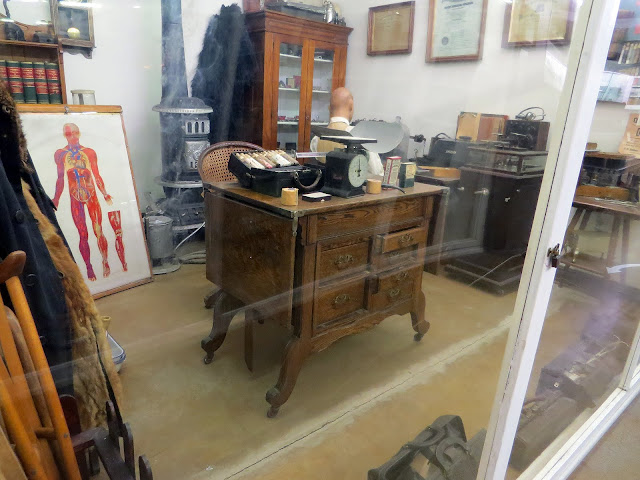 When the Exchange National Bank building was opened in Minden in 1884, Doc Hapeman moved into an office upstairs. During the 63 years (!) he practiced out of this office he delivered over 3000 babies and learned (?!!) how to successfully perform appendectomies. During his years of practice it was discovered that mosquitoes carried malaria, that vaccines could ward off many prevalent diseases and antibiotics were developed that could combat deadly infections.

After several years of sitting empty, Harold Warp got his hands on the entire contents of the office and eventually moved it here. 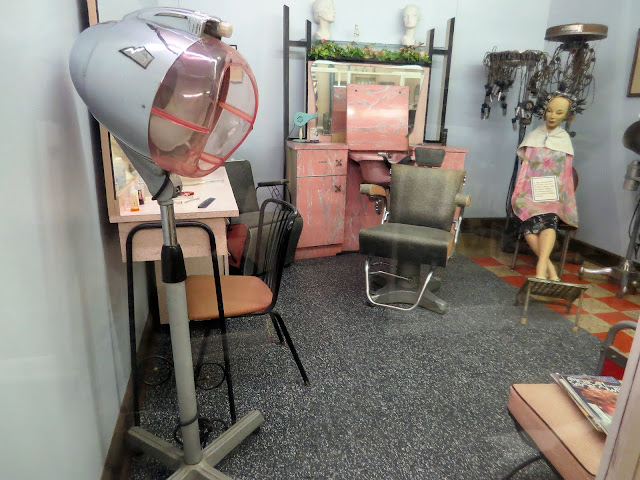 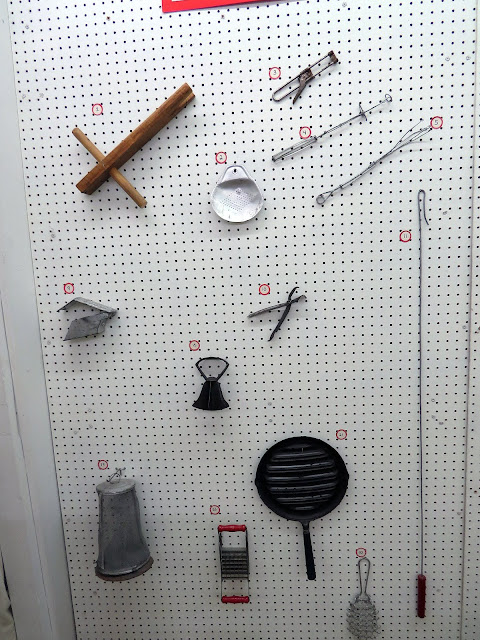 But it's not all fun and games, or torture in the name of beauty, in here.

There is a test!

This is one of three boards peppered with items "any pioneer child would recognize.  Do you??"

Free giveaway, that thing in the top left corner is not a crude doll, it's a bed-wrench, used to tighten the ropes strung under the mattress.

But I've saved what I found most interesting for last.

Today, if you discount the 'media room' found in some houses, the kitchen is the heart of the house, and it always has been. In this building are a series of rooms set up as kitchens from different era's 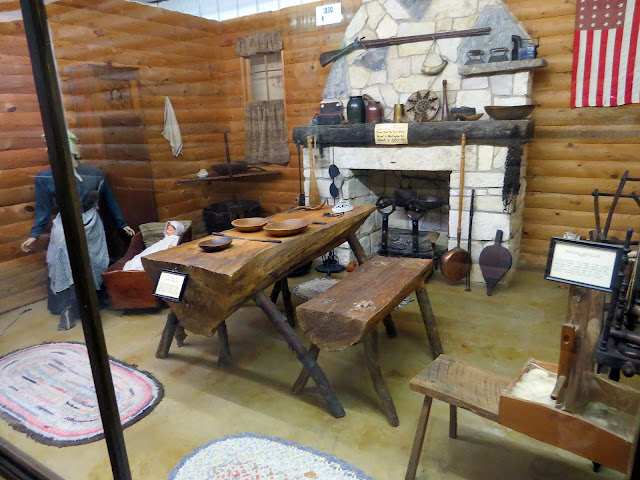 Starting with this 1830's kitchen.

The info plaque for this one is large and the protective plastic cover made photography difficult (Yeah, that's right, it was the plastic and had nothing to do with the photographer. . .) so in this case I've typed it out below. If you blow the photo up you can follow along with much of the descriptive text. (Or you can just ignore the whole thing because by now you're bored with all this rambling. . .)


Back in 1830, the kitchen was one end of a one room sod house or log cabin commonly built on the Midwestern prairies. Not by choice, but by necessity, the kitchen served practically every purpose from dining, heating, and sitting to laundry, bath and parlor. The opposite end of the room was reserved for sleeping quarters.

To clean the fireplace, there is a broom made from bluestem grass. A carrying yoke that was placed over the shoulders of the pioneer housewife had two bucket attached that carried water or other heavy objects is also on display in the 1830’s kitchen.

The hand-hewn table and benches add a touch of pioneer ingenuity. On the table are a copper (Betty) lamp, grease lamp and snuffer, hand carved ladle and forks. Hand carved wooden butter dish, wooden bowls and plate, and a milk jug.

Complementing this kitchen are a homemade loom and a floor rug woven on the loom; a spinning wheel; a zither; stomper-type wooden churn; homemade wooden cradle; homemade wooden clock with wood weights and works,; wooden bucket and a dipper; wooden wash bowl and homemade soap, and a handmade stool from the crotch of a tree. 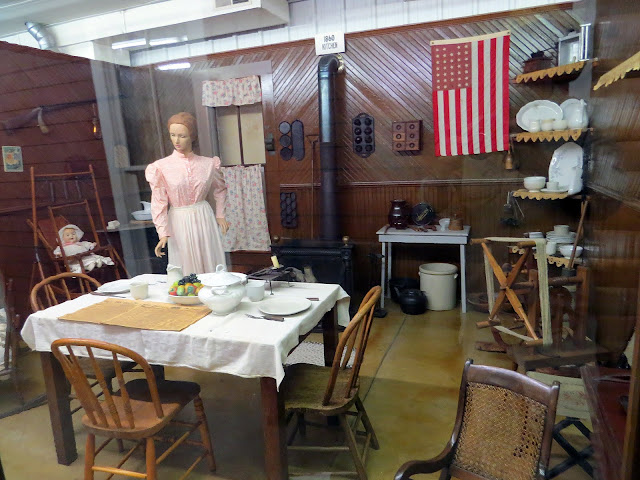 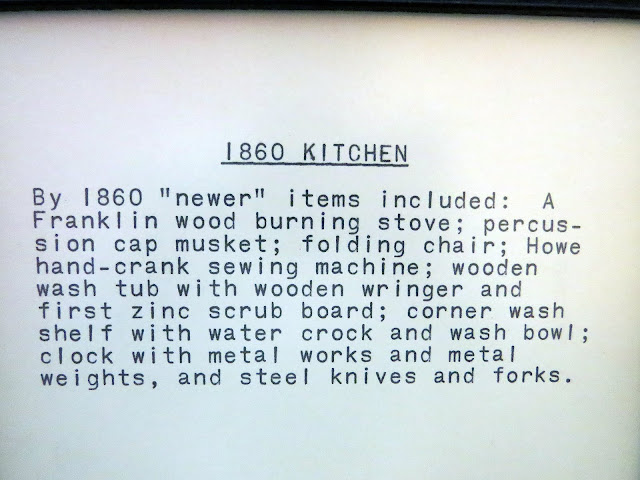 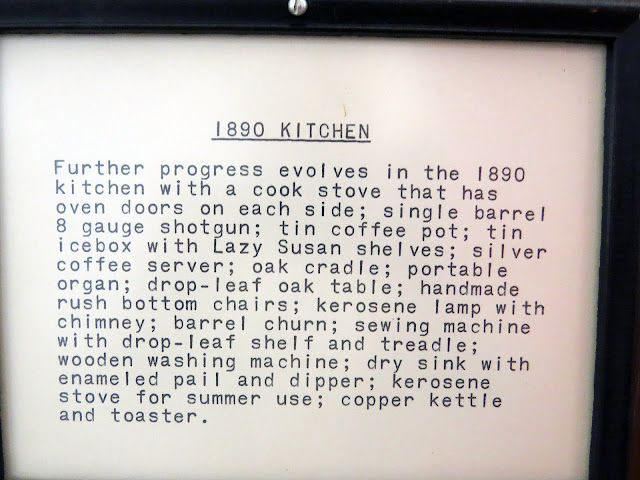 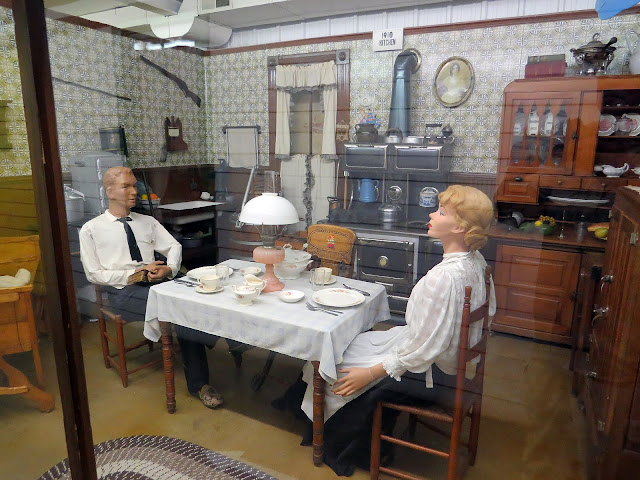 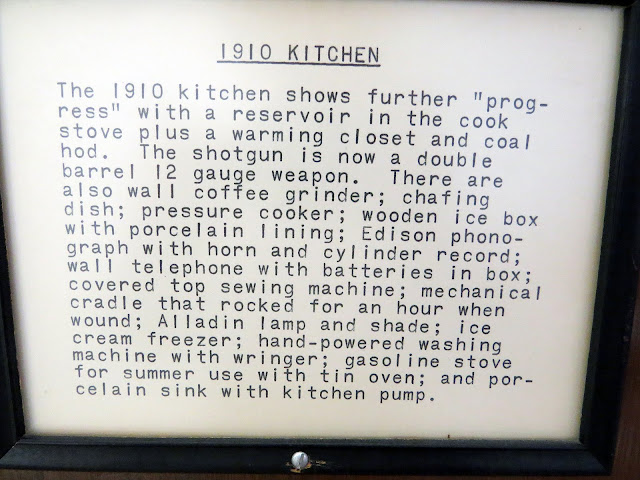 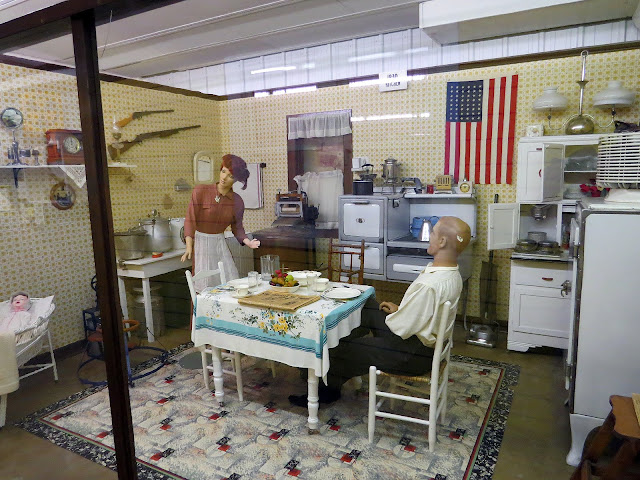 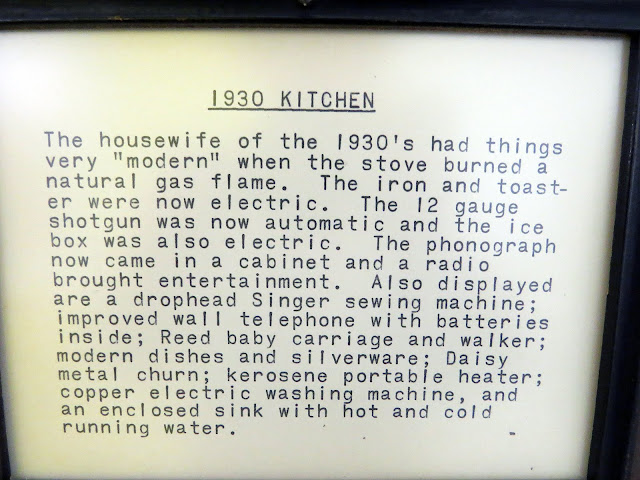 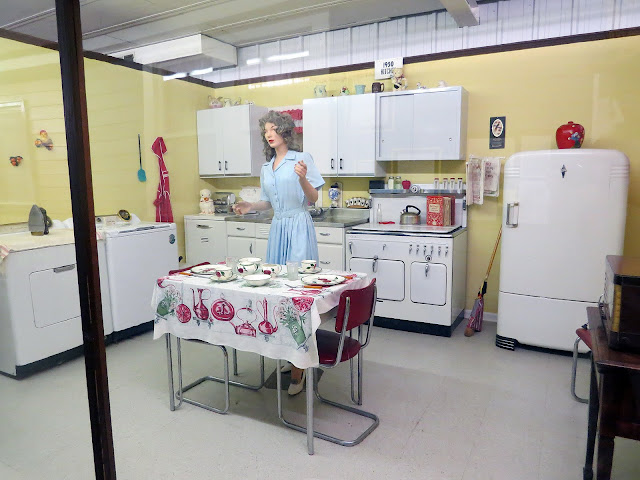 This has got to give anyone my age a warm-fuzzy!! 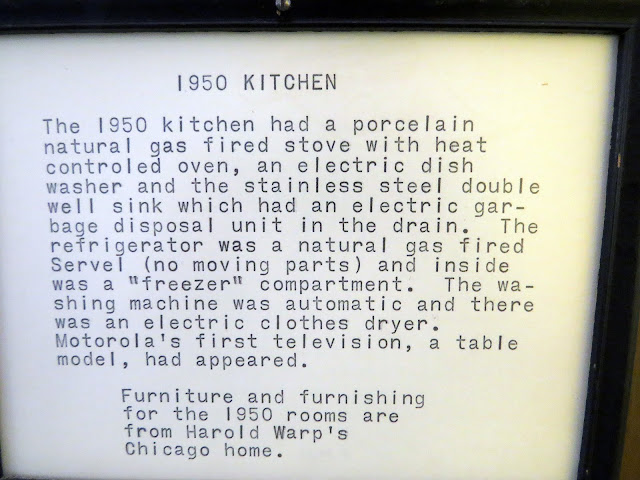 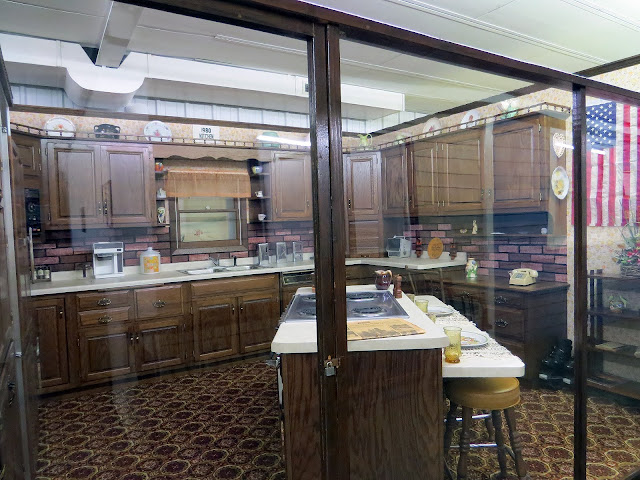 Aaahhhhh! What were we thinking???

On that note, and because by now, if you're still hanging in there, my welcome has probably worn out and I must be stinking (Three day old fish and guests and all. . .)

Next time I'm going to try to wrap up my visit to the Harold Warp Pioneer Village,