Oct 20 A day of changing plans 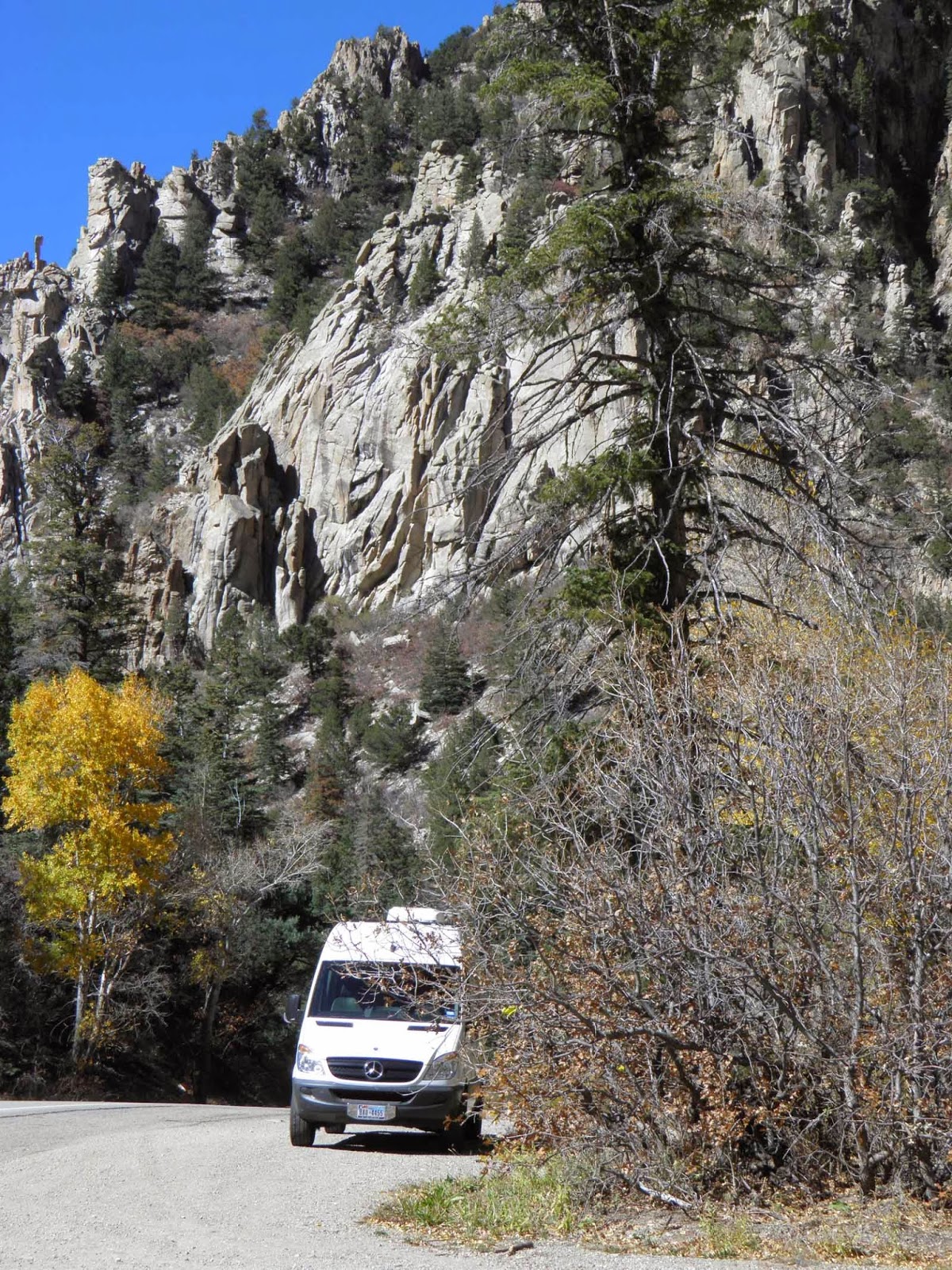 When I headed out this morning I didn’t have a very clear plan for today. I knew I was finally going to leave Raton and drive up Cimarron canyon to Eagle Nest and kind of thought I would then turn around and retrace the canyon and maybe head on down to Las Vegas (NM). 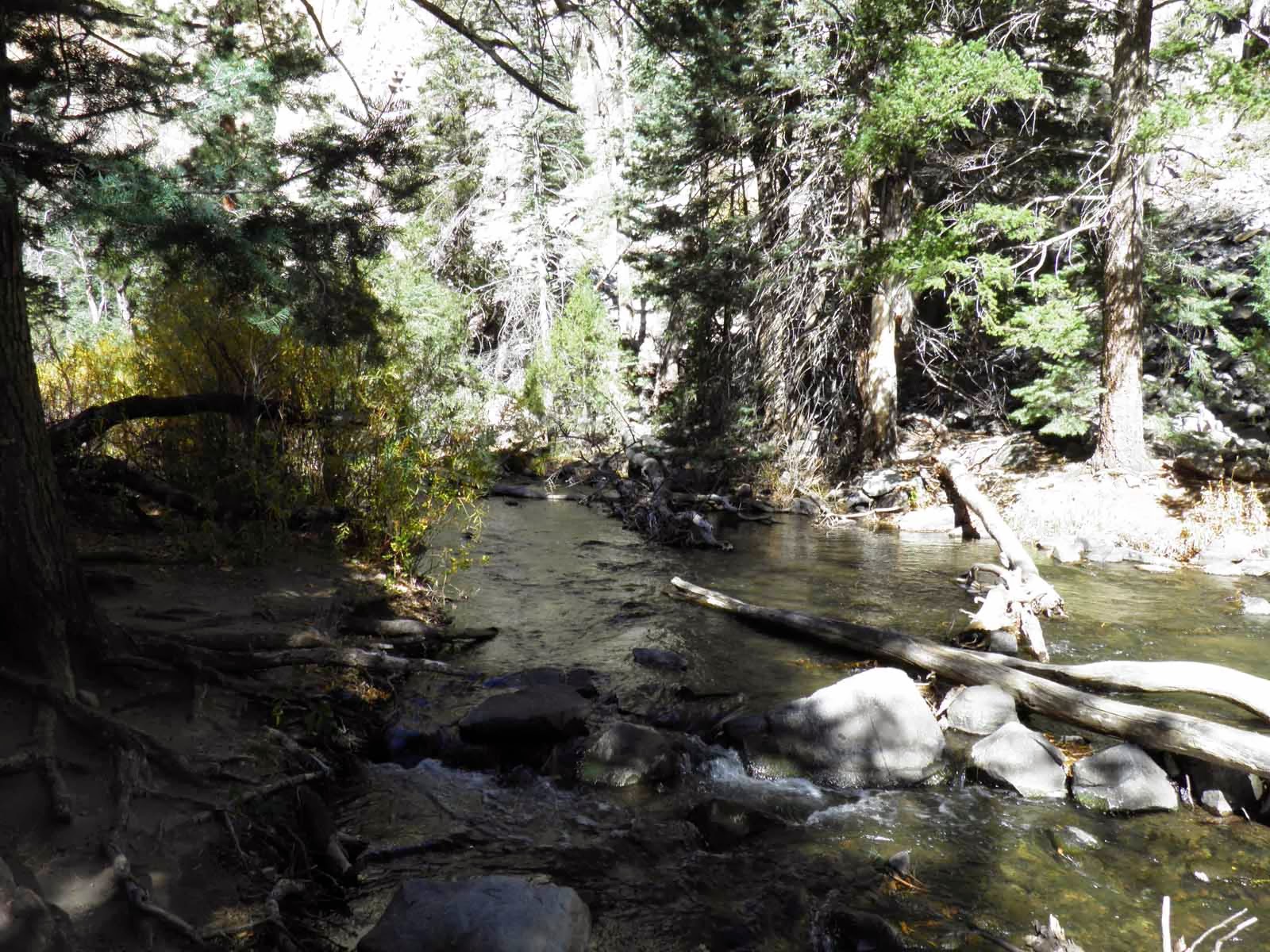 Along the way I was struck by how New Mexico drivers seem to understand speed limits and the concept of safe driving as I traversed the generally flat, straight and largely uninhabited stretch of US64 from where it leaves I25 south of Raton across to the town of Cimarron at the mouth of the Cimarron Canyon. If this had been Texas vehicles would have been ignoring the speed limit and zipping by me like I was standing still (Of course if this was Texas the speed limit would have been a ridiculous 75 instead of the sensibly posted 65 down to 55 at major intersections.) and when they couldn't pass they would have been following so close I would have been able to see the spinach in their teeth! Here the drivers stick to the speed limit, no mater how far ahead they can see, and space themselves out at reasonable intervals.
I drove straight on through the town of Cimarron expecting to be coming back this way later in the day, and had a pleasant drive up through Cimarron Canyon. But once I went over the saddle at the head end of the canyon and got to Eagle Nest I realized I wasn’t that far from the Vietnam Memorial outside Angel Fire so went about 12 miles down the high mountain valley so see it. 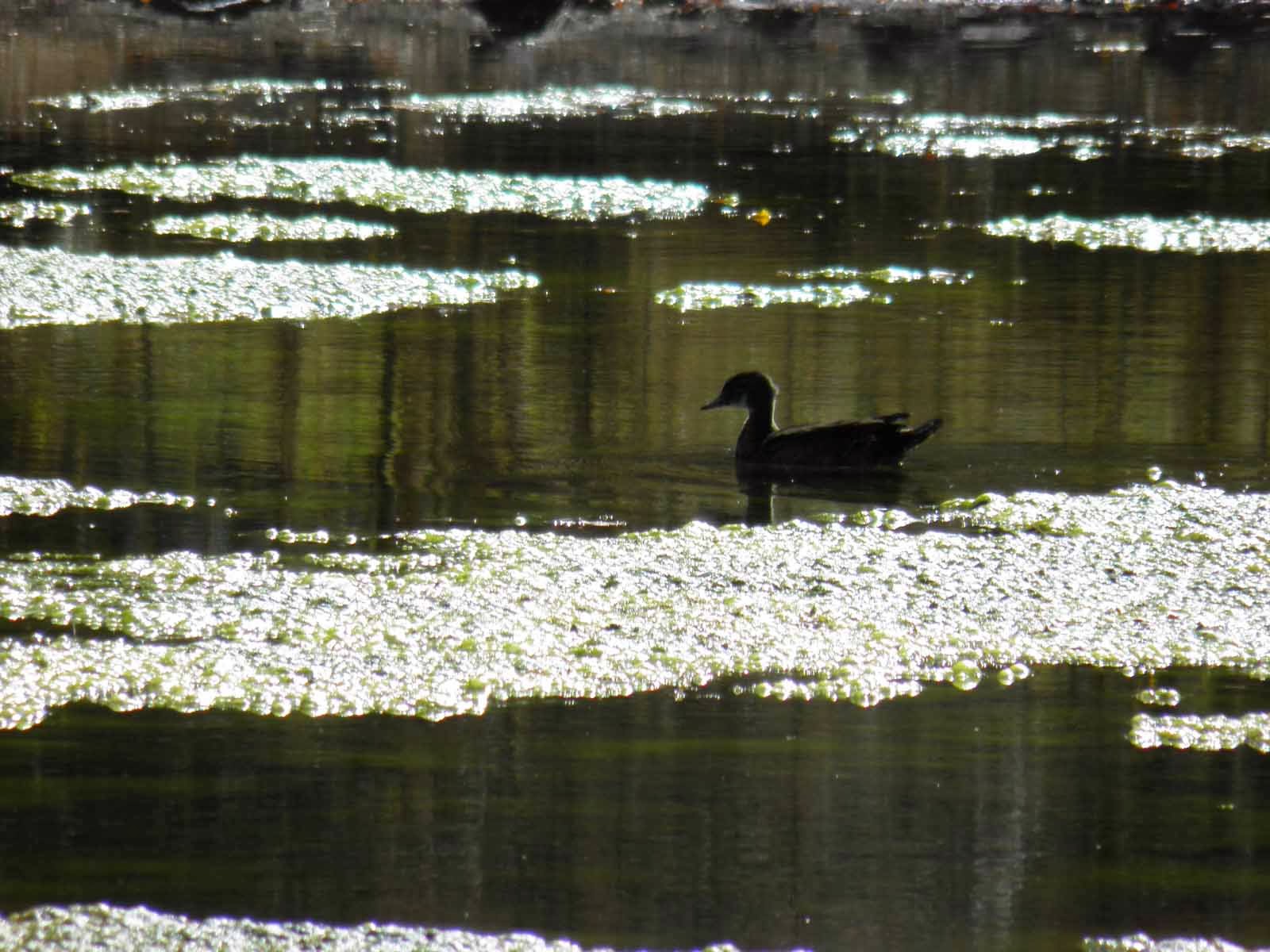 The memorial was started by parents that lost their son in Vietnam and is now part of the New Mexico state park system. I'm glad I made the effort to get there, but It was a very difficult place to visit and not a tissue anywhere. They even removed the paper towels in the bathrooms and installed air driers instead!

Right next to the memorial was a real-estate sign that seemed to match what a friend and his wife had described when they told me about some property they were looking at in the area so I called him to see if this was the place. It wasn’t but he had me go take a look anyway as it sounded like something they might be interested in. In the meantime he described the place they had been looking at (On the web) and after a little trial and error, since the original access road wasn’t there anymore, I managed to find it as well.
It was in a development tucked up on the side of a mountain and I was glad there was no snow on the roads up there! There was one house where the driveway was actually a bridge that lead off of the road right into the garage which was on the second floor of the house!


All this took up some time so I decided to just stay in Angel Fire for the night at a campground I had passed just outside town on SR434 across from the airport while looking for a way up the mountain. Apparently the Monte Verde RV park was officially closed for the season but I saw no signs  saying so and the owners live right there on the property and graciously booked me in for the night at $15. Pretty inexpensive for a private campground! 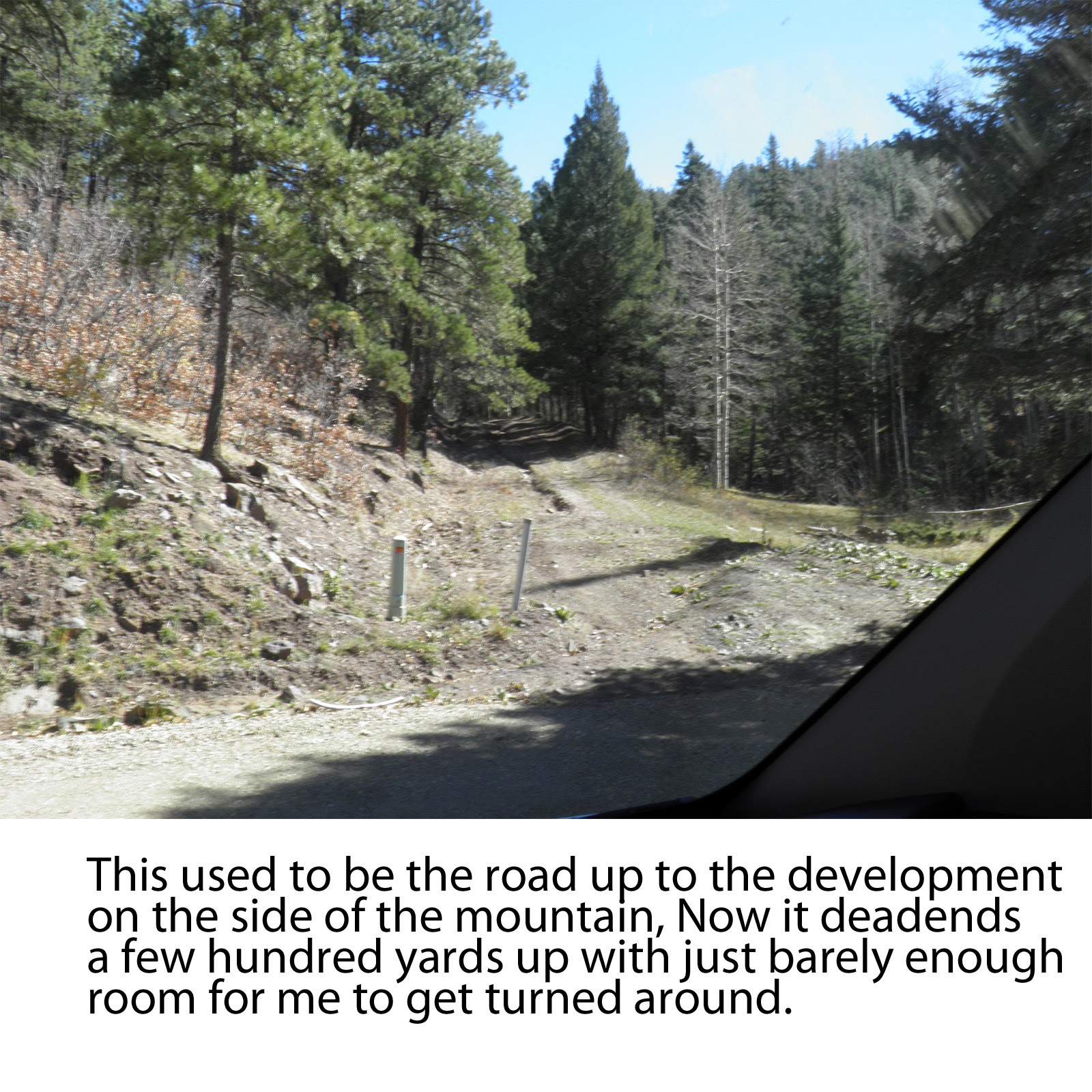 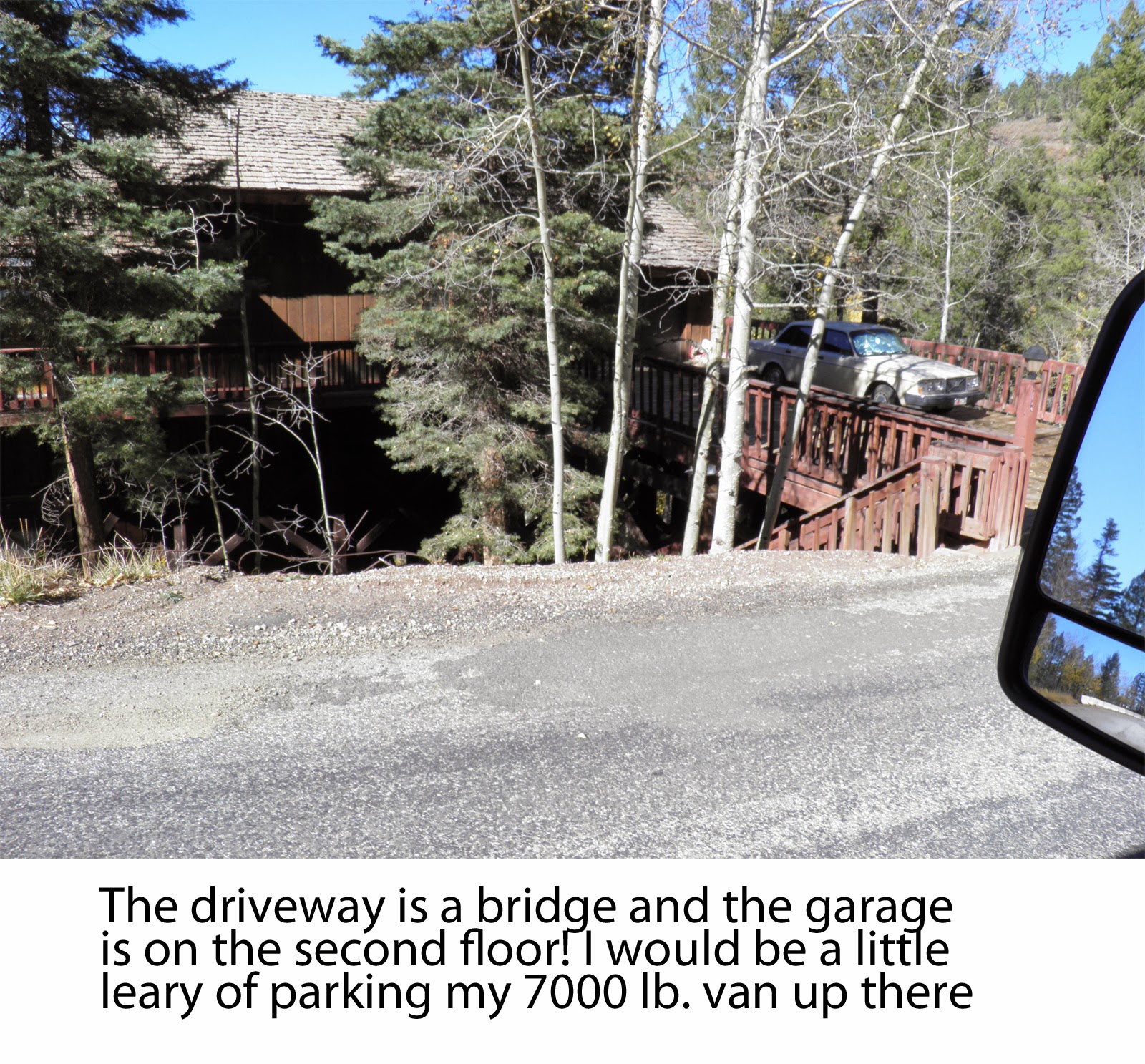