US50 - Phase 1: Still heading for the Northeast


After ‘taking a ‘hike’ around the truck-stop to ward off kinks, I got back on the road this morning expecting to deal with morning rush in Montgomery AL, but it never really materialized, at least not the rush I’m used to. In fact I passed a sign saying Montgomery was 8 miles ahead but I was still in deep woods with no indication there was a city anywhere around! I guess having grown up in the sprawled population of southeastern Michigan and spending the last 30 years in and around Houston, the 4th largest city in the country, has skewed my expectations a little.


Just after crossing the Alabama/Georgia line I saw a sign for the KIA exit. I’m sitting there trying to figure out why someone named a road Killed-In-Action when I burst out of the trees and to the left saw a massive assembly plant for KIA automobiles. This place is so big they built dedicated two lane wide ramps for it off the freeway! 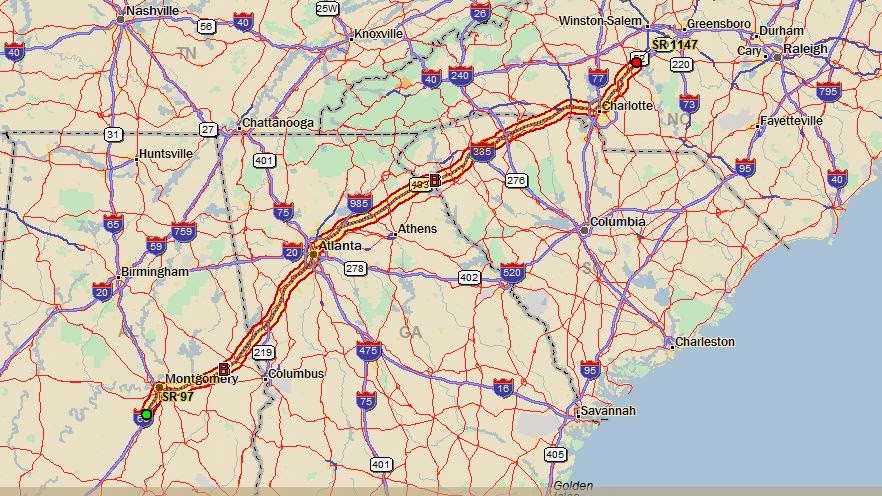 Somewhere between there and Atlanta I noticed that I could not get by a single on-ramp anymore without someone coming down it and wanting my space on the freeway, not that there was a lot of free space on the freeway now anyway. There were so many people around I began to get the jitters! (For the last 10 years we have lived 100 miles outside the city and I timed my excursions into Houston so I arrived at the beginning of the week in the dark of pre-dawn before most had gotten up and left at the end of the week before most of them got off work.)


After watching the cars get ever thicker on the road for most of the day, especially when I was skirting around Atlanta, I finally stopped at the Crosswinds campground just north of Salisbury NC. It was a bit of a challenge stopping there since roadwork had completely re-arraigned everything in the area so the directions in The Book were of no use at all. (Y'all know The Book, the Trailer Life Campground Guide.)


It was worth the effort though. It’s not often you find a private campground set back away from the main roads and laid out in the woods with untouched buffer zones between the sites, much like the state forest campground at Monocle Lake Michigan used to be. Crosswinds even had a small lake tucked into the trees and some short trails leading down through the woods to it.


I didn’t stay down there by the lake long though. Across the far side stretched some high voltage electric lines and in the silence I could actually hear them crackling. I’ve worked closely, very closely, with electricity my entire professional career, but it was still creepy hearing those electrons trying to get loose!
Posted by greg at 4:40 PM